I don’t really care how I am remembered as long as I bring happiness and joy to people.
I was not really as good as I should have been.
And so I missed those best years and I find it difficult for me, in groups, to be comfortable.
I always thought I was a singer, but I really am not.
I always knew I would act. It was just a matter of time.
What’s the most important thing in the world? It’s love, and I look at that as an energy, not a sentiment.
Usually in features, I’m the lead. I consider the director the captain, but I consider myself the first mate, and it’s up to me to keep in contact with the heart of the crew.
You can forgive yourself a great deal.
If I wasn’t Eddie Albert’s son, I’d be someone else’s. It gave me a chance to do a lot of traveling, but mostly I’m glad I’m his son because he’s such a good man.
Show More Quotes
Show less

Eddie was born Edward Albert Heimberger, and is certainly most known as Oliver Wendell Douglas, the lawyer turned farmer on the television series Green Acres, with Eva Gabor. Green Acres is one of the damn funniest shows I have ever watched. Much more as an adult – as a kid most of the humor was beyond me. Not anymore.

He was in many movies as well, including The Heartbreak Kid, with Charles Grodin and Cybil Shepherd, and The Longest Yard, with Burt Reynolds. Eddie played sleazy hardass characters very well. You can get a total list of his credits at the IMDb.

Eddie was also a dedicated environmentalist. Because of him, Earth Day falls on his birthday, April 22. He was also the national conservation chairman for the Boy Scouts of America. Thanks to him, the use of the chemical pesticide DDT was discontinued, due to the sudden decrease in the pelican population in California.

He was a war hero as well, and was at the battle of Tarawa, one of the bloodiest battles of World War II. He rescued seventy Marines during rescue missions, and was awarded the Bronze Star.

Eddie lived in the Pacific Palisades, in this house, 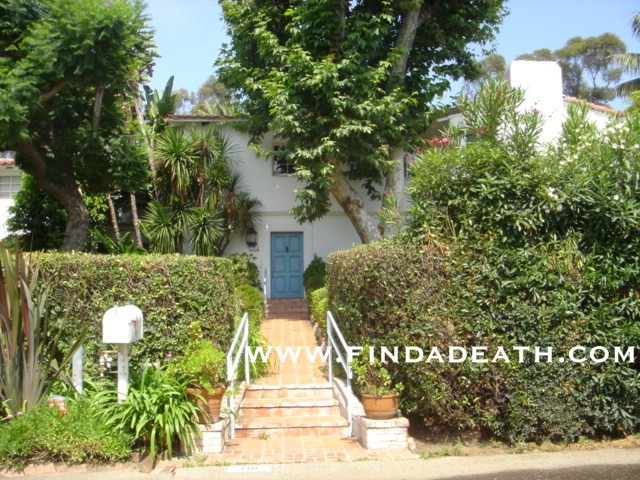 with the funky mailbox. 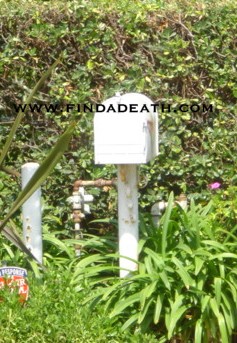 He had been diagnosed with Alzheimer’s disease ten years ago, and for the last years of his life was cared for by his son, Edward Albert Jr. On May 26, with his son in attendance, he died of pneumonia, at the ripe old age of 99. 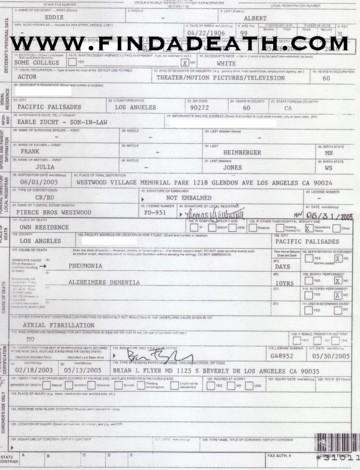 Funny thing, he once told TV Guide that he wanted to live to be 100 years old. From what I’ve read, he was in pretty good health up until a month before his death. According to his son, his father was playing basketball with his granddaughter two days before he died.

Coincidentally, he died the day before the remake of The Longest Yard was released, starring Adam Sandler.

Eddie was cremated and buried in Westwood Memorial Park, alongside his wife, the Mexican actress Margo. They were married from 1945 to 1985. She died of brain cancer. They had two children and had two granddaughters. 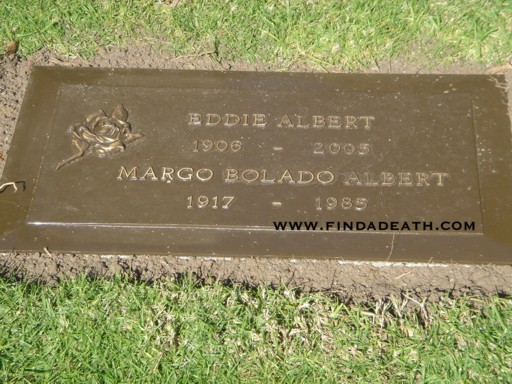 He was offered the lead roles on both Mister Ed and My Three Sons. He turned them down to do movies.

This is an actual sound file from Green Acres, when Lisa wanted to establish a Hooterville Symphony Orchestra.

Goes to show you how times have changed.  Don’t shoot the messenger.

Findadeath.com friend John from Germany sends us this:  I remember reading somewhere that Mr. Albert wrote, produced an even starred in the first live television drama broadcast ever on November 6, 1936, another interesting anecdote you may want to add to his story. You can visit the link here.

Thanks to Kevin Hassell for the story, and Mike Steen for the death certificate.