January 2002: Did she have an attitude?  Read the red stuff below.

We all remember her for her role in The Andy Griffith Show, and thanks to my friends Cathy and Dave Bradford of North Carolina, we now can SEE where she lived her final days. Here’s the buzz on Bee:

She’d visited the town previously during local celebrations, and fell in love with it, and bought a house on West Elk Street. 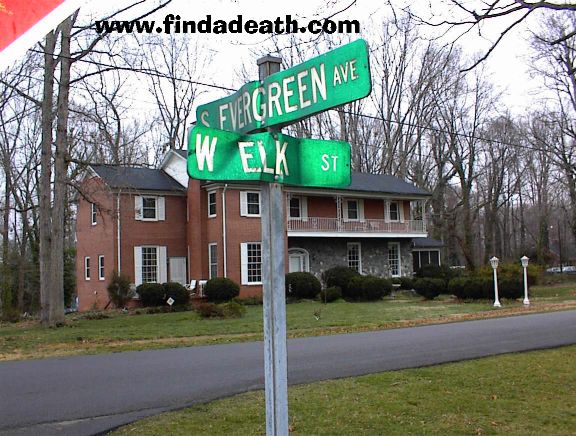 During her time in Siler City – she avoided fans and interviews like the plague. This aside, she supposedly made many friends in the area, and a lot of them called her, “Aunt Bee.” Inevitably, some idiot would come and knock on her door, looking for Sheriff Andy or some such nonsense. I don’t blame her for being a bit apprehensive, but I think she was losing her marbles.

Andy Griffith once did an interview with Ralph Emery, and the subject of Frances came up. He said that both he and Ron Howard tried visiting her in Siler City. Unannounced. She flipped. Later, a mutual friend of theirs called Andy, and said that Frances wanted to talk to him. Andy called her, and she told him that she was sorry they never got along better. She told him that she had suffered two heart attacks and cancer. Andy said in the interview that it wasn’t that they didn’t get along, it was just that she didn’t always feel up to playing the role. Hmm.

She was admitted to the Chatham Hospital, 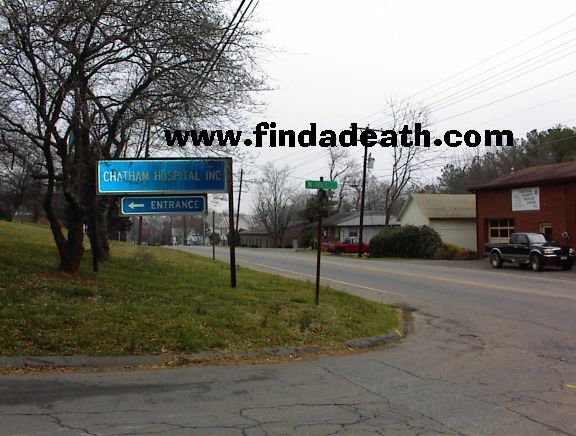 the day before Thanksgiving, 1989. She was kept in the coronary care unit for two weeks, 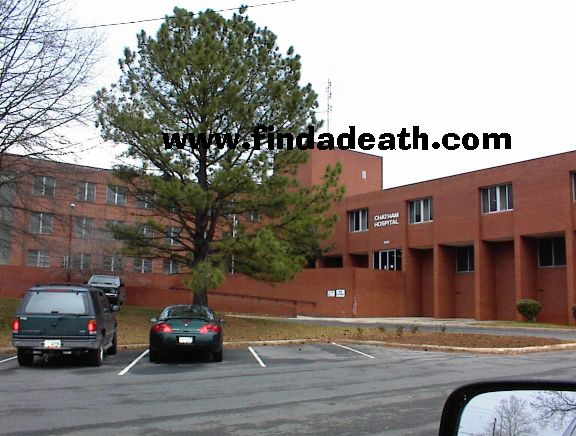 and finally discharged on Monday, December 4.

She died in this house on Wednesday, December 6. Heart Failure. 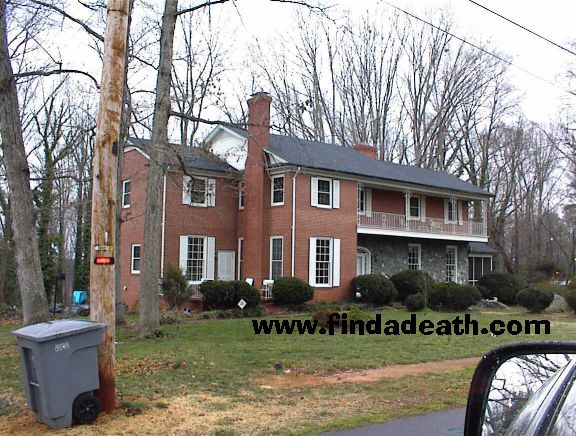 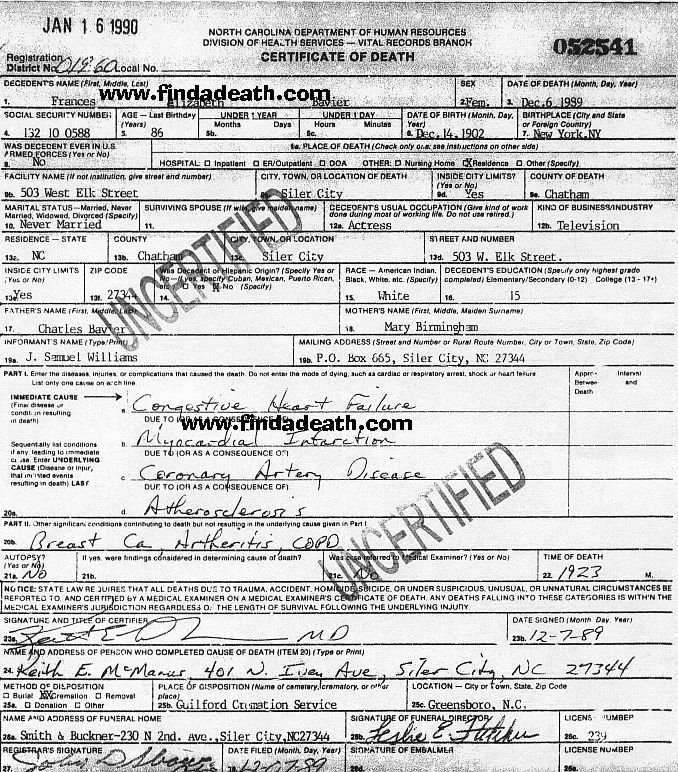 Upon her death, whoever went in the non-curtained house found it reeking of cat piss, 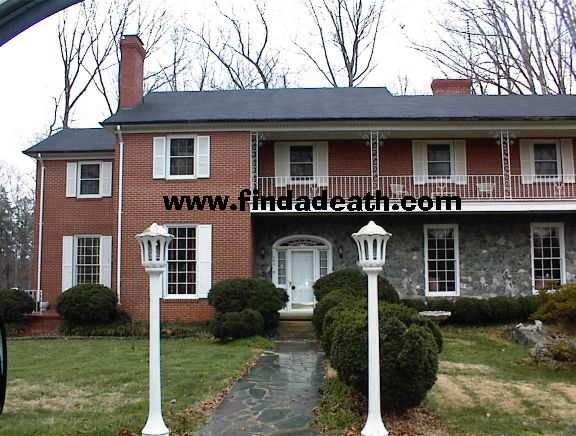 which is one of the worst smells on the planet. The plaster was peeling, the carpets frayed, and the upholstery worn. She didn’t keep a tidy home. She had 14 cats (ugh.), and their litter box was the basement shower.  Not in it, it was it.

Supposedly, Frances spent most of her time in a large back room, sparsely furnished with a bed, a desk, a television and an end table. The only mementoes they found were a few hats and dresses that she wore on the show. In the garage they found a blue 1966 Studebaker, with four flat tires. (This just in from Findadeath.com friend Bill Gregory Terlecki, “Aunt Bee drove a 1964, I think that was the year, Studebaker Lark. Way after that date, she would drive herself to the studio in it. It was pea green. This I know as fact, as I use to be in the Studebaker Packard club in Vancouver area, and the monthly magazine did an article about it.”) Supposedly it was the same car that she drove in Mayberry, RFD. Cool. The last time she used the car was in 1983 – for a trip to the grocery store. In all, her estate was worth $700,000 (not too shabby) and her possessions were worth just under $32,000.

I have no funeral information for Frances, but I do know that she is buried in the nearby Oakwood Cemetery. Her tombstone says “Aunt Bee” on it. 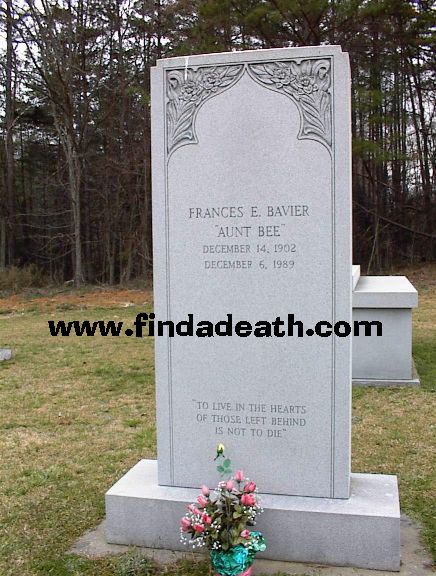 In her will, Frances bequeathed her house to the Moore Memorial Hospital, in Pinehurst. The contents of the house went to the University of North Carolina Center for Public Television. The cats were found homes, well, except for one that got away.

On Saturday, June 2, 1990 – there was an auction held of Frances’s belongings. Fans lined up to pick over things like velvet hats and white gloves (which Frances really wore), and even her old contracts from The Andy Griffith Show. All in all, there were 800 items for sale. Boy, I bet they wished that Ebay existed then. They could have made a killing.

Trivia: I once wrote Andy Griffith a fan letter, and this was my response. 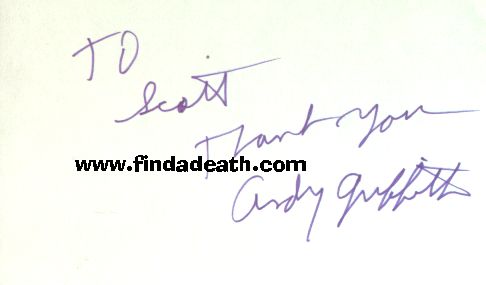 Thanks again, Cathy and Dave. You guys are just tits!

Findadeath.com friend Kay sent in this piece of trivia:  Aunt Bee–Frances–whatever….(great story, BTW)…in light of her…eccentricities, shall we say, it is perhaps surprising that she filmed her last movie, Benji (yes, the dog story), in the Dallas, TX area in 1974…she played the old lady whose cat Benji chased every day..

Trivia from Findadeath.com friend Jim:  I was told that Howard Morris (Ernest T. Bass) couldn’t abide Frances Bavier. Their feud supposedly came to a head during an episode he was directing.

Morris was placing actors on the set. He said: “Frances? I’d like to move you over here.” Frances was sensitive about her considerable girth, and real or imagined slights. She turned on Morris and snarled, “Nobody will `move’ me!!!! I am not a sofa! I am not a dining room table!! How dare you?!!!!!”

She did this in front of cast and crew. Morris told my friend it was all he could do to hold himself back from slugging her in the jaw.