Come on boy, bend an elbow.”.  “She was the winner, that became the doggie’s dinner.

Marie Prevost was born Mary Dunn in Canada (Sarnia) and moved to Hollywood with her family.  She found success as a Sennett Bathing Beauty, eventually leaving for Universal Studios, then Warner Bros.  She made the transition to sound, and in her career that spanned 21 years, she made a staggering 121 films.

Marie lost her mother in a car wreck in 1926, and turned to booze and food.  Roles became more difficult to find.  She began playing blowsy tough dames.  She crashed dieted to get any work, and by 1937 she was so broke, she was borrowing money from Joan Crawford. (An IOU was found amongst Marie’s belongings for either $100 or $300 depending on who you ask.)

The apartment building that Marie lived in, is often described as dingy, or a dump.  It’s right off Vine St., and I think its a rather nice place.  The Aftonian still stands, though its occupants are now foreign and rude. 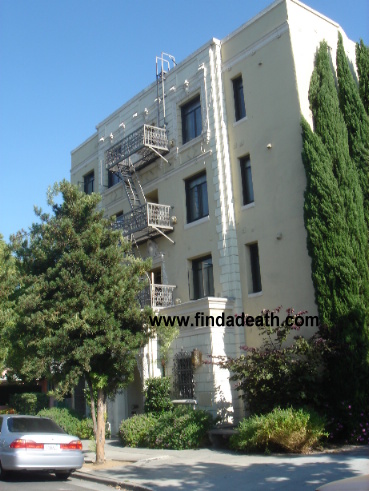 No doubt Marie would take her little dachshund out for a stroll, out these doors. 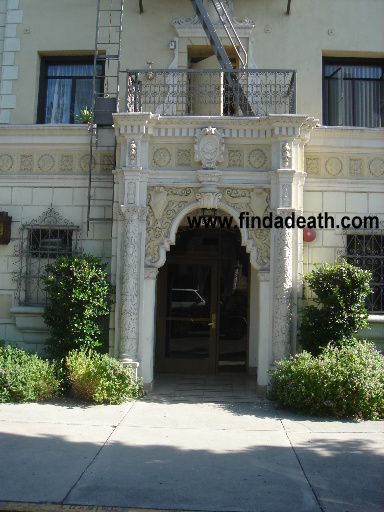 Unbeknownst to her, she probably even ventured down the street, past the building where Red Hot Chili Peppers member Hillel Slovak would overdose in 1988. 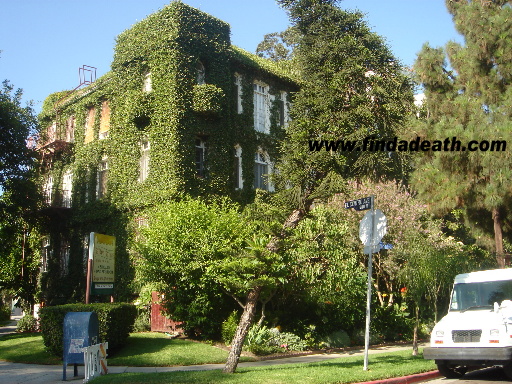 At the end, Marie had drank and starved herself to death.  This would probably have happened on January 20th, 1937.  Other residents of the building were complaining that Marie’s dog was barking up a storm, and either a building employee let himself in, or police were called.  When entering the room, they found the 37 year old dead.

Her death certificate credits acute alcoholism as the cause of death.  Most people mention extreme malnutrition as well, though this is not on the death certificate.  Her heart stopped.  Done. 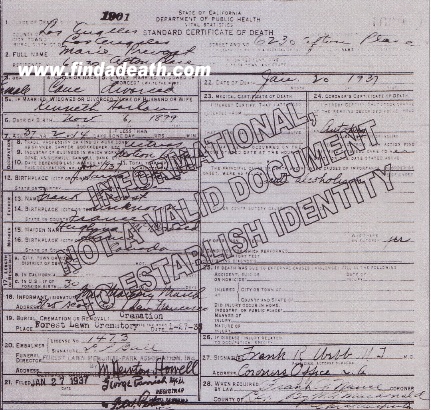 Taken directly from the book Hollywood Babylon, comes this Kenneth Angerism: Her romantic looks didn’t fit her Bronx (false) honk, and blonde (probably false) Marie tried to down her heartbreak in bourbon. Marie dragged on until 1937 when her half-eaten (false) corpse was discovered in her seedy (false) apartment on Cahuenga (false) Boulevard.  Her dachshund had survived by making mincemeat of his mistress (false).  Aside from being a well known work of fiction, it is a good picture book, and in it you will find proof indeed that Marie was not consumed by her pooch, but it looks more like the worried dog was trying to wake her.  Warning, if you don’t want to see Marie’s corpse, do not click here.  You can see, she was intact.

Her funeral was held at Hollywood Memorial Cemetery, and attended by Barbara Stanwyck, Mack Sennett, Douglas Fairbanks Jr., Clark Gable, Andy Devine, Robert Young.  Her body was taken to Forest Lawn Glendale and cremated. They have no records of her, or at least they didn’t, the last time I called. According to most published sources, her cremains were combined with those of her mother (who died in a wreck in 1926), and are in an undisclosed location. There is a report that they were picked up by a person named Charlotte Young, Prevost’s surviving sister. She was living in San Francisco at the time.

Another report is that Joan Crawford had paid for the grave and she is buried in Hollywood Cemetery.  This is not true, though they were good friends.  I’d sure like to know for sure what happened to Marie’s cremains.

Nick Lowe also penned a song about her, which you can sample here. Oddly, he chose to spell and pronounce her name differently, I cannot imagine why. Well, yes I can.  Because.

It’s a shame, this woman who had conquered Hollywood, is now only remembered as a punch line. She’s in good company, right Cass? Karen? RIP.

In my experience, the dachshund has not been the friendliest of dogs. Imagine my surprise when friends had my Dekker DNA tested.

Marie Prevost, 38 years of age, once reigning queen of the Sennett bathing beauties, was found dead yesterday in her modest single apartment at 6230 Afton Place, Hollywood.  Apparently dead two-days, her body was found clothed and face down on a folding bed.

Whining at the-bedside was her pet dachshund, Maxie, and teeth marks on the actress’ body indicated animal had tugged at his mistress in an attempt to arouse her.

In the tiny kitchen two gas heaters were burning under an open window. Several empty whisky bottles lay in the sink.

Although Detective Lieutenants Stambler and Sanderson declared death undoubtedly was caused by a heart attack, the body was taken to the morgue and an autopsy will be performed,

The apartment was disarranged but there was no indication of violence or foul play, officers reported.

Alarmed over absence of activity about the Prevost suite, Mrs. Henrietta Jenks, manager of the apartment, sent William Bogle, houseboy, to investigate. He opened the apartment with a passkey and found the brown-haired actress dead on the bed. She had drawn a robe over her, apparently as one would do before taking a nap. Her shoes and stockings had been removed.

Police were notified by Harry Jenks, the manager’s husband.

Bogle, who lives at 2124 Hooper Avenue, said he last saw Marie Prevost alive last Wednesday when he cleaned the apartment.

VISIT TO A STORE

On the same day she visited a nearby delicatessen and talked with Bernard Weiss, 18, living at 849 Mansfield Avenue. Bernard said Miss Prevost redeemed a $2.50 check which had been returned by the bank and said she had been inLaguna Beach for two months.

At one time the former star was a dog fancier and her apartment was filled with blue ribbons and pictures of her prize-winning animals.

Attached to the actresses apartment door was a penciled note: “Please do not knock on the door more than once. It makes my dog bark. If I am in I will hear you as I am not deaf.”

Residents of the apartment building believe the note was written to ward off bill collectors, many of whom called during the three months Miss Prevost had made her home there.

At the time of her death the comedienne was attempting a screen come-back and had been fortunate in obtaining bit assignments in several pictures.

She was heavily in debt, it was reported, but at the time her body was found her purse contained $100 and her rent was in advance.

That she had been befriended by those who worked with her in the Sennett comedies was indicated by a promissory note found on her dressing table showing that Joan Crawford had lent her money to tide her over a difficult period.

Nods to Stardust and Shadows, by Charles Foster.

My thanks to Ginny Michaels and Greg Smith.