Women like me. They think I’m wholesome or something.

Everyone knows who Mary Wickes was, if not by name, certainly by appearance. She was, without a doubt, one of the best-known character actresses ever. Probably most famous to the “now” generation as Sister Mary Lazarus, the older hook nosed nun in Sister Act, she was also in White Christmas, Now Voyager, The Music Man, and Postcards From The Edge. She also did a ton of television: she was cousin Octavia on The Waltons, she was in Sigmund & the Sea Monsters and I Love Lucy, where she famously played Lucy’s ballet teacher. In real life, Mary was a good friend with Lucy, which was no easy feat. Her last role was the voice of a gargoyle in Disney’s The Hunchback of Notre Dame, completed a few days before her death.

Here’s something interesting: the LA Times listed her age as 85 in her obituary, yet her death certificate says she was only 79. Other sources say she was 83. I dunno. The woman was old. And funny. 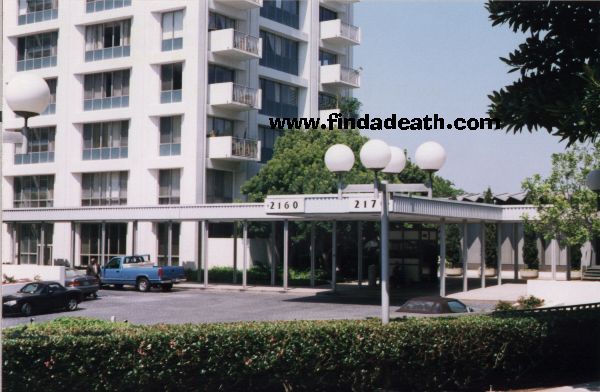 Here is her building. 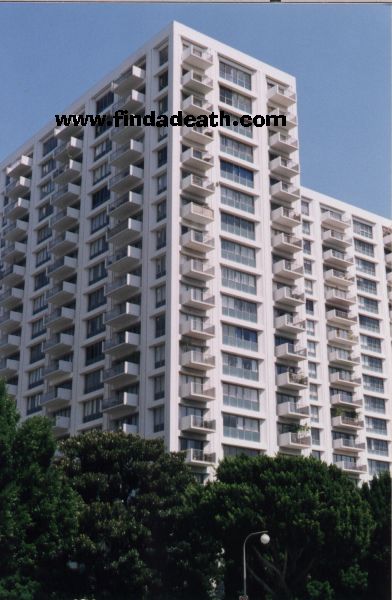 When I was taking the photographs, a woman who lives there told me that Don Adams and Fay Wray still live there. In October, Mary was in good health, but was taken to the UCLA Medical Center for respiratory problems. 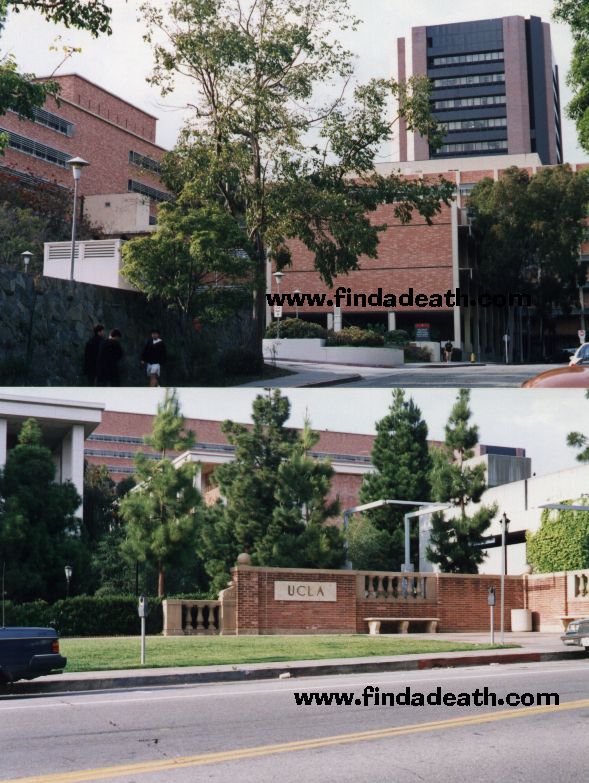 During her stay, Mary fell and broke her hip, prompting surgery. She died of complications following that surgery. She was as old as she was. 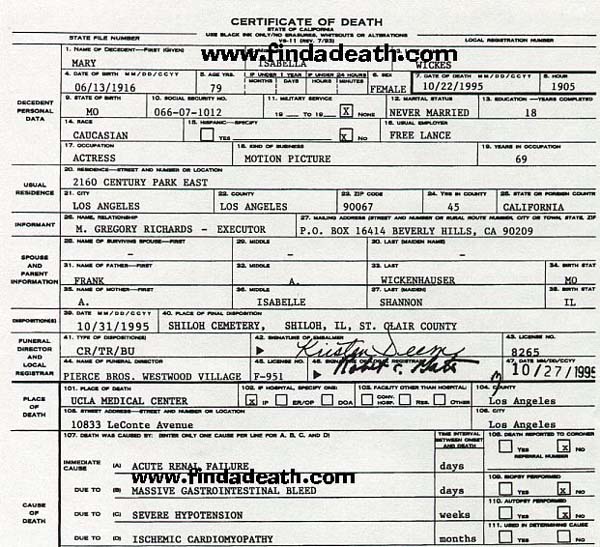 Findadeath.com friend Scott Williams sends in this explanation of Mary’s cause of death, for which we are truly grateful.  Amen:

Immediate cause of death:

1) Acute Renal Failure: Can’t make pee. Shut down or death of the Kidneys. Poisons and fluids (as well as Medications) cannot be voided and back up and overload the body to toxic levels.

2) Massive Gastrointestinal Bleed. Shitting blood. Can be from a bleeding ulcer or tumor in the stomach, esophagus, or intestines. These can be massive and sudden and unexpected, and kill you quick; or be so slight and slow that no symptoms are seen. Of course, the word “Massive” is used here. Note the “Peptic Ulcer” (same thing) under “other”. She had a history of “G.I. Bleed” and intestinal ulceration. By the way, an ulcer, by definition, is an infected sore of the gastro-intestinal lining that goes below the mucosal protactive layer and invades the flesh of the organ, causing bleeding.

3) Severe Hypotension: Super low blood pressure. She couldn’t keep her pressure up.( I wonder just how long she HAD been bleeding). The death cert notes this as “weeks” in duration. This could be a complication of continuous G.I. Bleeding at a steady rate before it became “Massive”, or related to a failing heart, see 4.

4) Ischemic Cariomyopathy: Clogged heart arteries. The chronic lack of adequate blood / oxygen supply to the heart making it weaker by the day. Note again, in “other”, Myocardial infarction, or plainly, Heart Attack. Again, history of heart damage. “Ischemic” means literally “lack of oxygen” applying specifically to tissues. Cardiomyopathy implies a long term heart condition, always progressive, until too few cells are left alive to pump, or the heart is so scarred and enlarged that, even pumping, it can’t contract completely, or empty itself efficiently enough, to support an adequate blood pressure to supply the tissues and organs with an adequate oxygen supply.

Two other things in the “Other conditions / aka “Contributing factors”, are “Anemia”, which is simply “not enough red blood cells in the blood”, as well as “Breast Cancer”.

Mary was a confirmed bachelor (read DYKE), and had no surviving family. Her funeral was held at All Saints Episcopal Church, in Beverly Hills, the following Saturday afternoon. 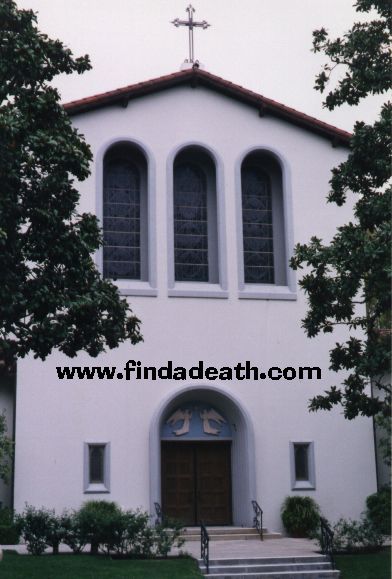 I went, but couldn’t get in. Had to stand outside and listen to Lucie Arnaz Lucked-up-enbill speak. I remember Kathy Najimy was there, looking good, Tracy Nelson (Mary was also in The Father Dowling Mysteries), and the guy that USED to play Edward Quartermaine on General Hospital, not the more recent, horrible one. I do remember them taking Mary’s casket out, and hearing her clunking around in there. She was not a tiny lady.  Here is a copy of the funeral program.

Anyway, according to the information I have, Mary was then cremated and flown back east for burial. The cemetery I have listed is the Shiloh Cemetery, in Shiloh, Illinois. BTW, Mary was born in St. Louis.

Findadeath.com friends, Sandy and Chris, ventured to the cemetery, and snapped this great pic of Mary’s tombstone. 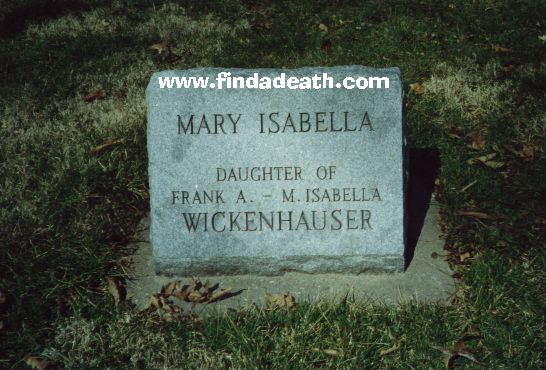 Thanks guys.  My pal, Jim, told me that Mary is buried only 20 feet from Abraham Lincoln’s parents.  Great trivia.  Cheers.

Correction, December 2001:  I am something of a “Lincoln buff” and wanted to set that straight.

Abraham’s mother, Nancy Hanks Lincoln, is buried in Southern Indiana, having died from “milk sickness”. Afterward his father, Thomas Lincoln remarried Sarah Bush Lincoln and the family moved to rural Coles County, which is quite a ways from St Clair county, the location of Shiloh according to their website.

Mary had a lot of money when she died. She made a $2 million bequest, made in memory of her parents, which has become the Isabella and Frank Wickenhauser (her birth name) Memorial Library Fund for Television, Film and Theater Arts.  Maybe she was a cheapskate.  I wrote her a fan letter a few years back, requesting an autograph.  She responded, but all she did was cut off the bottom of my letter, and sign it.  Usually people send signed photographs.  Honestly, she didn’t have to respond at all, but I just thought it was odd.  Here it is. 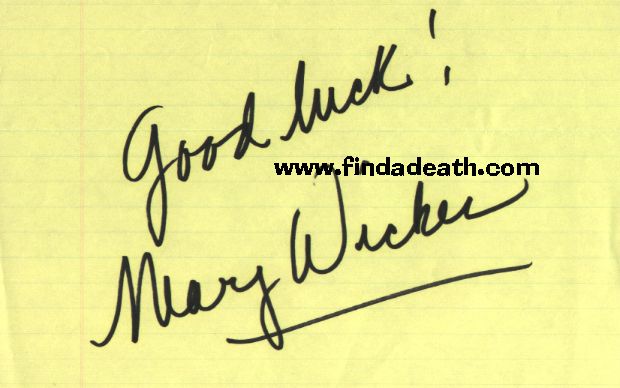 Her personal correspondence is sealed until 2027 by request of the Trustee of the Mary Wickes Estate. That would be an interesting read, but then, I’m just nosey.

Thanks for the info you posted on the passing of Mary Wickes and her
final resting place.

She was always one of my favourite character actresses, and it is
amazing how many projects she worked on over the length of her career.

I laughed when you commented about her “lifelong bachelor” status.  I
remember being in the audience for the old game show “Tattletales”,
which featured three celebrity couples, competing to see how well the
partners
knew each other, and seeing Mary during one of the taping sessions.  She
was on with a male friend, another character actor who always played
foppish queens, which was definitely not a stretch for him.  I can’t
remember the guy’s name, but I had guessed at the time that being gay
was something they had in common.

Thanks for filling in some of the blanks about this greatly missed
actress.