I never told a joke in my life.
There’s no drama like wrestling.
I just want real reactions. I want people to laugh from the gut, be sad from the gut – or get angry from the gut.
If I was going to be a little boy about it, I’d go into hiding for one or two years. But if I was going to be a man about it, it’d be 20 or 30 years.
It’s not that I was crazy. It’s just that I was sad at times because the world was sad at times. When I would perform, it wasn’t sad anymore.
Pure entertainment is not an egotistical lady singing boring songs onstage for two hours and people in tuxes clapping whether they like it or not. It’s the real performers on the street who can hold people’s attention and keep them from walking away.
If I play my cards right, I could bring network wrestling back to TV. Unfortunately, to most people, wrestling is a laughingstock. But fortunately, I’m reaching people who otherwise wouldn’t watch it.
I’m from Hollywood. That’s where we make movies and TV shows… I’m not from down here in men-fus ten-uh-see, okay?
My mother sent me to psychiatrists since the age of four because she didn’t think little boys should be sad. When my brother was born, I stared out the window for days. Can you imagine that?
I thought Doodyville was inside of the television. You know, like, if television was this box – and if I went inside the box that was a television, I’d be in Doodyville
Show More Quotes
Show less

Lorne Michaels asked Andy Kaufman to appear on the inaugural broadcast of Saturday Night Live (October 11, 1975), but he is best known for his work as Latka Gravas on the TV sitcom Taxi. 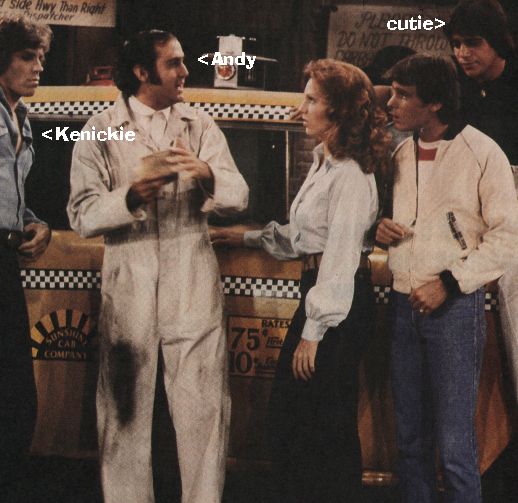 By 1983, Andy was living in the Pacific Palisades. His house was located on Lombard Avenue. 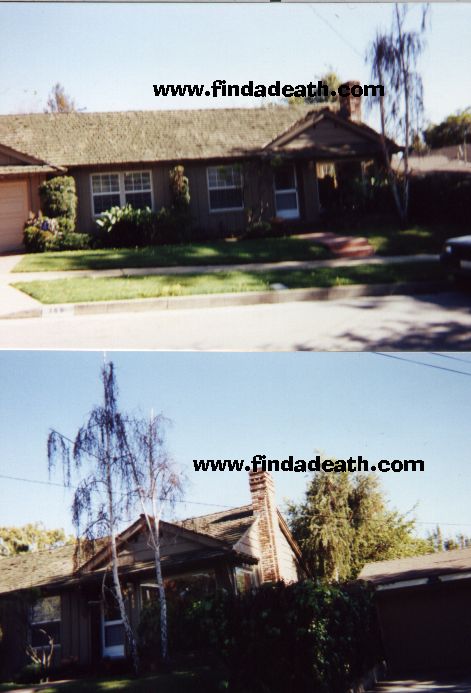 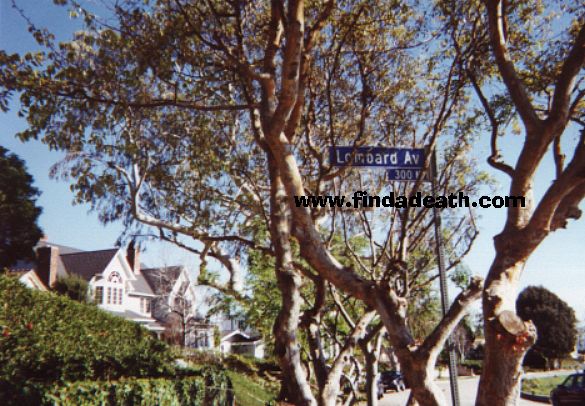 Andy was having a Thanksgiving holiday in 1983, with his family, back in Long Island. He had a persistent cough that annoyed everyone, or worried them. He had recently had a check-up, and everything was fine, then. A few weeks later, the cough still hadn’t gone away, and he went for another batch of tests. Surprise! They found that this non-smoker, non-drug user, non-serious drinker had lung cancer, and was given only 3 months to live.

Andy’s mother had recently been diagnosed with bone cancer and had a stroke, so Andy tried to downplay the illness, not mentioning it to a lot of people. Because Andy was always pushing people’s buttons, the people he did tell, didn’t believe him. You see – two or three years before he died, Andy told his best friend that he was considering faking his death from cancer at Cedars. He told the producers of Fridays that he was thinking about it, and how it would be cool to come back 10 years later.

Andy tried several forms of therapy. Chemo, etc and even went to the Philippines with his girlfriend, 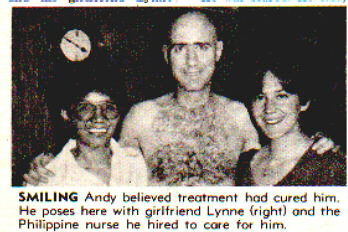 for psychic healing by some guy called Labo.

Upon his return to the US, his condition deteriorated.

AUGUST 2001 Findadeath.com friend Jhuebner sends this in:  I looked at the photo
of the Phillipino nurse, Andy, and his girlfriend and I noticed that yes, his head is bald from the chemo… However…

From personal experience as a 4 yr survivor of Non-Hodgkins Lymphoma & chemo (which also killed Jackie Onassis, King Hussein of Jordan, and recently Joey Ramone) I can attest that if you lose the hair on your head, you are also going to lose chest hair, eyebrows, pubic hair (just had to add that) essentially the full nine yards. (Wanna add to the rumor mill about Andy’s vitality in 2001?)

I believe he is dead. Perhaps he had chemo after the visit with the miracle doc and shaved his head for reasons only Andy knows. After all, he was quite unique. Keep up the great work.

Interesting!  Thanks for that.

He spent his final days at Cedars Sinai, wide-awake and aware. Five months after being diagnosed, Andy Kaufman died at 6:27 p.m. on May 16, 1984.

He was 35 years old. Cancer at Cedars.

David Letterman was taping a show, and upon hearing the news of Andy’s death, he ended it with the remarks, “He certainly was unique, and we’re going to miss him.”

On May 18th, there was a funeral held in Great Neck. 300 mourners attended the open casket service. A lot of people still thought Andy was doing a put on, so they would poke his body when no one was looking. Because Andy was a firm follower of Transcendental Meditation, there are those that believe that Andy could have been lying there in his casket, not breathing, but alive. Supposedly, everyone from the show Taxi hated Andy, and didn’t show up to the funeral.

Andy is buried in the Beth David Cemetery, in Elmont, New York.

People still think Andy will come back. That movie sort of contributed to all of that. I haven’t seen it, and know nothing about it. I did see a documentary about him recently, and all that female wrestling bs he used to do. God he bugged me. I guess that was his charm.

Findadeath.com friend Becca sends this in:  “Being the Andy Kaufman fanatic that I am…I was wondering if maybe you’d include one of my little favorite pieces of trivia about Andy regarding his death in 1984…

In Bill Zeheme’s book, “Lost In The Funhouse” it talks about how Andy died in Cedars Sinai  hospital, and when he died…it was with his eyes open. The nurse tried to close them, but after doing so…they came open again! You may not have been a fan of Andy, Scott…but you got to give him this much! The man could keep the crowd guessing, even in death!

This just in, January 2003, from Findadeath.com friend Ken from Brooklyn:

Andy Kaufman went on David Letterman‘s Show soon after Albert Goldman published his Lennon book and ranted about Goldman. He said “Mr. Goldman, I’m alive. Face and confront people who can defend themselves”. Letterman had to practically push Andy off the stage. Hope Goldman doesn’t decide to write about Andy!

Scott, one thing I noticed right away when seeing the Andy Kaufman pics in the Phillipines with that “psychic” guy Labo.
The captions state he is removing cancerous tissue from Mr. Kaufman.  It is well known now that this is a con tactic used by some people to cheat them out of their money.  Usually a bowl of chicken parts are hidden and the “doctor” actually shows these parts to the “patient”.  Other cons similar to this are eggs that are spoiled eggs that when cracked open, only after the “mark” has given over money of theirs that is deemed “evil”.  The egg appears all black and rotten.  And the con states this is the evil that came out of the money.  Then the mark is told that the “psychic” will have to get rid of the money for them to ensure it does not cast any of its left over evil powers on the mark.

It is sad to say that it appears Andy Kaufman was the victim of his own hope and a deceitful con artist.  While he was getting “treatment” from this guy, he could have better used the time to get actual treatment that may have slowed and maybe halted his cancer.  Instead it progressed while he was in the Phillipines.  That’s probably why it came on so fast and strong once he arrived back in the states.Thanks, JK!

I thank friends of Findadeath.com Rebecca Mennel and T. Weier for the text, and Terri Rios and Adam Carter and Beca again, for the photographs. I thank you for your input, and appreciate it.