I prefer when movies target my heart instead of my mind.
My parents were of the opinion, because they had started skating very young, that you should have something that you do that you care about, because it structures your life as you’re growing up.
Teenagers are like atoms when they’re moving at hundreds of miles an hour and bouncing off each other. Everybody’s got such a crazy hormonal drive and reacting to each other differently and getting upset over little things. High school puts all these potential explosions in one place.
In a relationship when things are really great you don’t need to say anything and just enjoy the other person. Sometimes with a couple, it gets dark and you don’t know what to say and that silence can last all day. Other times you don’t want to stop talking because you don’t want to lose one another.
My playing music is strictly for fun. When I was in a band, I was really excited to talk about it since I had never really played music to that extent. It was never meant as something I would consider as anything more than having fun with my friends. But I think I would enjoy writing music for the movies that I’m working on.
If you want to make movies you need to think on a micro-micro level and figure out how to make them for nothing with people who really care about your movie and really want to make it.
I’m not passive aggressive. If something bothers me, I think about it, then I act on it. I express it.
I want things to be characters and not me. Why would I want to play me?
I think you can always find interesting, complex and fascinating characters to play in different kinds of movies. It’s in your hands.
Every relationship I’ve been in becomes long-distance because of work. It’s never worked out. It puts an intense strain on the relationship, and at a certain point, it becomes too difficult.
Show More Quotes
Show less

Anton Yelchin was born in Leningrad.  His parents were professional figure skaters and they came to the US as refugees when he was young.  His parents worked by teaching ice-skating to Americans.  On the suggestion of friends, Anton went into acting.  He earned parts in TV shows and movies like Fright Night (2011) and Alpha Dog.  He won several acting awards and his career was going just swell.

His mega-break happened when he was cast in the latest Star Trek reboot as the Russian character Chekov.  Honestly, couldn’t they get a transgender person?  How racist.

In his free time Anton played guitar.  He was in a band called the Hammerheads for a bit. 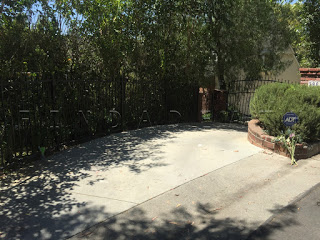 You can’t see much of the house from the street, but there is this curiously sandbagged garage. 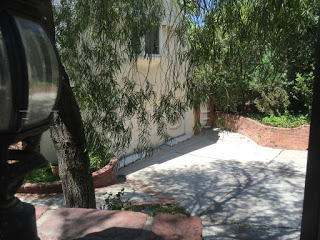 The house is high up in the hills so it’s secluded and I’m sure the view is spectacular.

Of course Anton was very well liked.  No one is going to say, “He died tragically and he was a dick.” Unless we’re talking about Jerry Lewis. But by most accounts, Anton was not a dick. He was not known to use drugs. 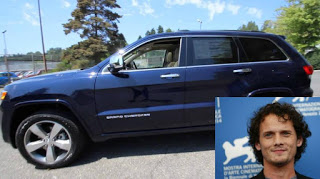 In the evening of Saturday June 19, 2016, Anton left his home to attend an 11pm rehearsal.  He started his Jeep and drove up his driveway to the road.

Hey, here’s what you don’t do!: Anton left the Cherokee running, on a steep incline, got out and walked behind it.

I don’t know why he got out of the car, but when he did, he did not put the parking brake on. He may have thought he did, but he didn’t.

While he was behind it, the 2.5 ton vehicle rolled backward and pinned Yelchin against the brick post attached to the gate to his property.  He was trapped.

When Anton didn’t show up to the rehearsal, which was unusual, friends decided to drive to his house and check on him.  This would have been around 1am. 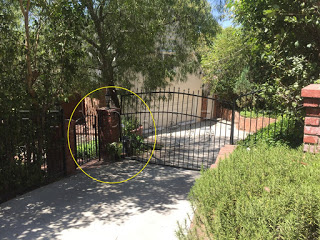 No one knows how long Anton was pinned there, but he was.  For several hours.  Dead.  The Jeep’s engine was still running.  There is supposedly security camera footage of the incident. 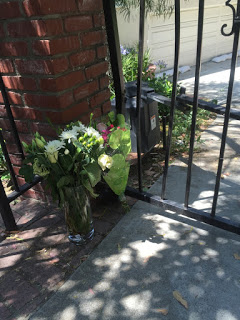 Cause of death:  Traumatic asphyxia.  He could not breathe with the weight of the Jeep pressing against him.  He was pinned to the gate.

He then became a member of the 27 Club. 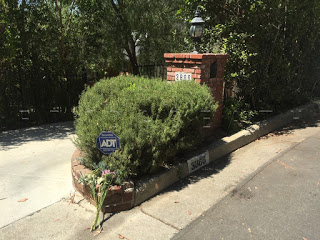 Fans came to the gates and left flowers at the scene and on social media, the emotional statements spewed.  (When you care enough to hit “send”). His parents took out an ad in the a paper, thanking people for the support. 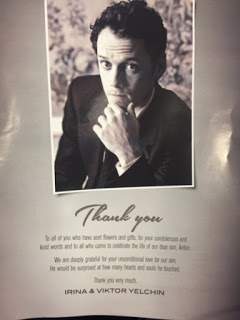 Three months prior to the incident, this particular model of Jeep Cherokee was recalled because the gearshift was so, that it could confuse the driver as to which gear it is in.  The driver could “think” that the car is in PARK when it actually was not.

His death was ruled accidental. 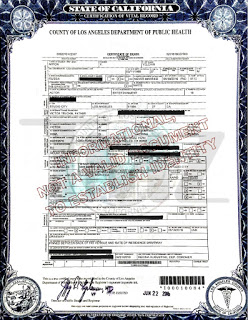 Cue the lawsuit against Chrysler/Fiat filed by Anton’s parents.

Train-wreck Lohan queefed out a statement blaming Hollywood for his death.  “Surround your life with good people and know who your true friends are.” Because your true friends will be there when your car rolls backwards and pins you to a fucking gate.  Asshole.   I hate people.

Anton had a private memorial service 5 days later and is now buried in Hollywood Forever Cemetery. 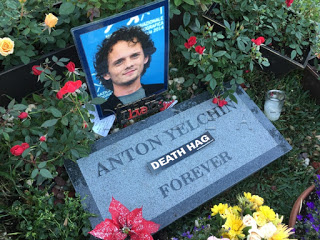 Prime real estate too.  15 years ago, a plot in that location would cost around 30 grand.  Who knows now?  It’s spitting distance to Mickey Rooney, which I often do.

As I understand it, this is a temporary marker and soon there will be a statue installed.  There are a lot of statues in that area now.  A pal commented that it’s starting to look like a chess set.

It’s what he would have wanted.

Star Trek Beyond was released a month after Yelchin’s death, and the film was dedicated to him.

Now here’s the Ding Ding Bizarro WTF thing:  Anton was in a movie called Burying the Ex in 2014.  Some of it was shot in Hollywood Forever Cemetery. I watched the movie.

Here is a screen capture of Anton.  His own future gravesite is in this shot.3 years before he died, Anton Yelchin appeared onscreen with his own grave.

In October 2016 there was a Star Trek Convention somewhere, to which I say ‘of course there was’. I’m not judging, just observing.  There was a tribute wall for fans to sign for Anton.  In November 2016 and exhibit of Anton’s photography went on display in Hollywood. 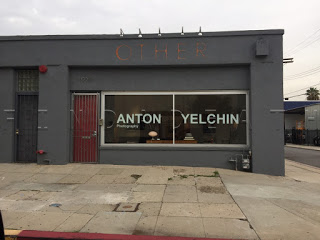 Trivia:  The actor Walter Koenig who created the role of Chekov in the original Star Trek series (which was produced by Lucy.  TRUE!) had a son, Andrew Koenig (who played a creature named “Boner” on Growing Pains) who disappeared back in 2010.  It was big news here.

Boner ended up topping himself and is buried near Anton at Hollywood Forever. (Thanks, Chuck).  Sad Chekovs.

On Saturday October 8, 2017 a statue was unveiled at Anton’s grave.  A lifesize statue of Anton.  Yes.

Brian Donnelly snagged this ultra spooky picture of it. 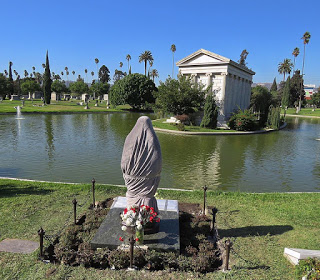 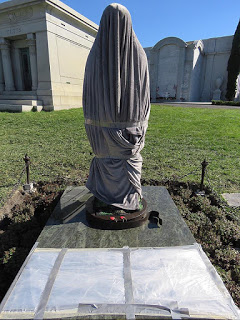 Here it is in all it’s glory. 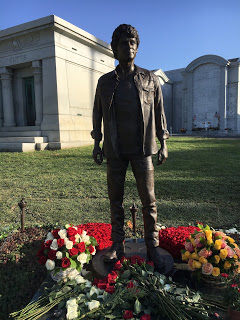 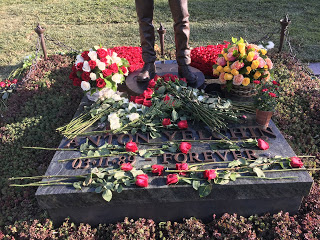 Thanks Cathy Kimbrell, BS and Craig. 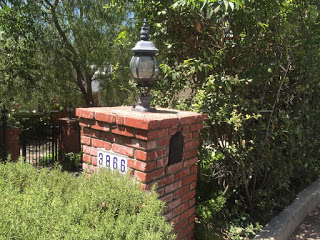