I bumped into Gerald Ford the other day. I said, ‘Pardon me.’  He said, ‘I don’t do that anymore.
A bank is a place that will lend you money if you can prove that you don’t need it.
Middle age is when your age starts to show around your middle.
When we recall the past, we usually find that it is the simplest things – not the great occasions – that in retrospect give off the greatest glow of happiness.
She said she was approaching forty, and I couldn’t help wondering from what direction.
I have seen what a laugh can do. It can transform almost unbearable tears into something bearable, even hopeful.
You know you’re getting old when the candles cost more than the cake.
If you haven’t got any charity in your heart, you have the worst kind of heart trouble.
A sense of humor is good for you. Have you ever heard of a laughing hyena with heart burn?
You never get tired unless you stop and take time for it.
Show More Quotes
Show less

Bob Hope was born Leslie Towns Hope in England on May 29, 1903. His family came to America when he was four years old, and he grew up in Cleveland, Ohio. He started out in show business by doing vaudeville, eventually moving on to radio, movies, television, and just about everything else. You can read all about his career elsewhere, you know that’s not how it’s done here. With that said…

Bob had stopped doing TV specials in 1996, and pretty much retired from show business at that point, except for a K-Mart commercial that aired in 1997. In May of 1998, on his ninety-fifth birthday, he and his wife Dolores celebrated with a party that was held at his Toluca Lake house, which they had lived in since 1938.

Three days later, on May 30th, he and Dolores were the honorary grand marshals for a Toluca Lake parade that was held in his honor.

In June of 1998, it was reported that he had died. This would later prove to be false. Said his daughter Linda; “He was eating breakfast when he heard about it. He got a big laugh out of it.” From then on, it would be all downhill.

On many nights he couldn’t sleep, so he had his driver take him to a nearby Bob’s Big Boy, where he would have coffee and talk with other customers. 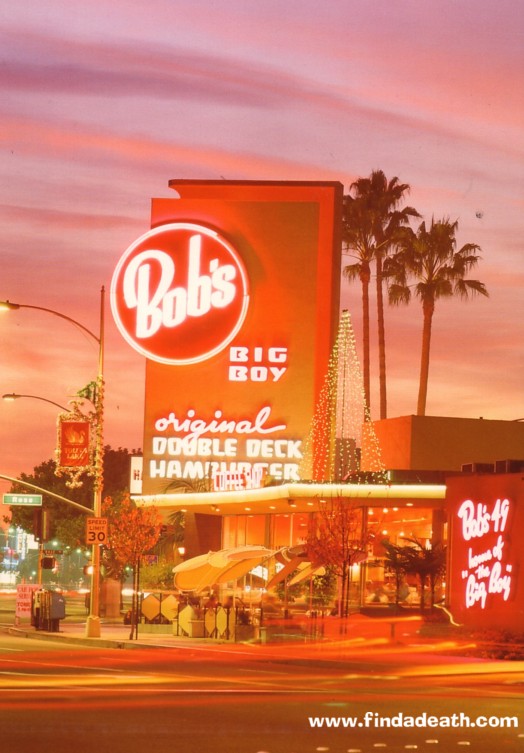 Other than a few public appearances, he spent most of his time at home watching game shows like Jeopardy, or Wheel of Fortune.

In April of 2003, one of his stars on the Hollywood Walk of Fame was rededicated so he is now the Citizen of the Century, 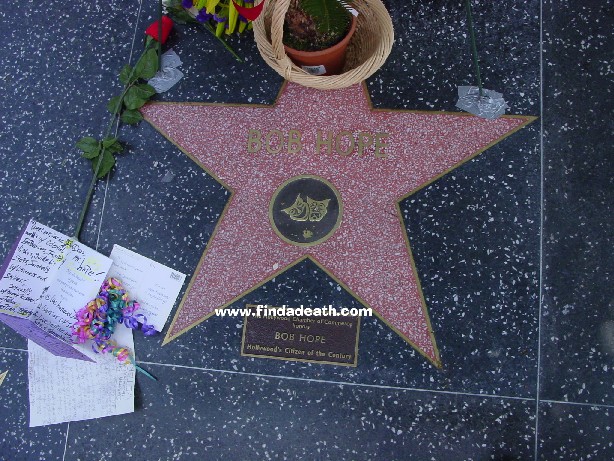 and the corner of Hollywood and Vine dedicated as the Bob Hope Square. 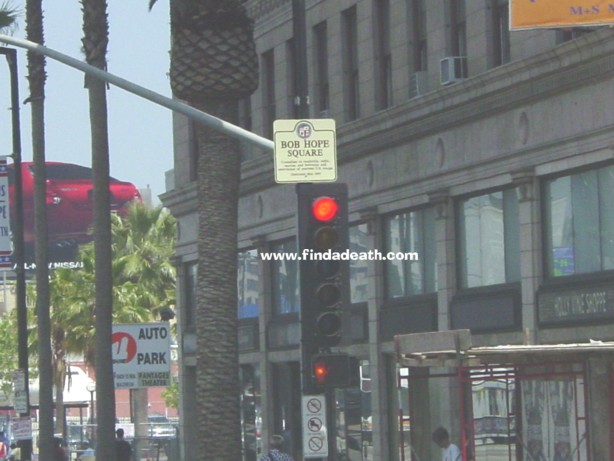 I assume they did it a month early from his birthday, to make sure he would get it while he was alive. IF he was alive. He didn’t attend the ceremony.

On May 29, he celebrated his one hundredth birthday with family and friends. 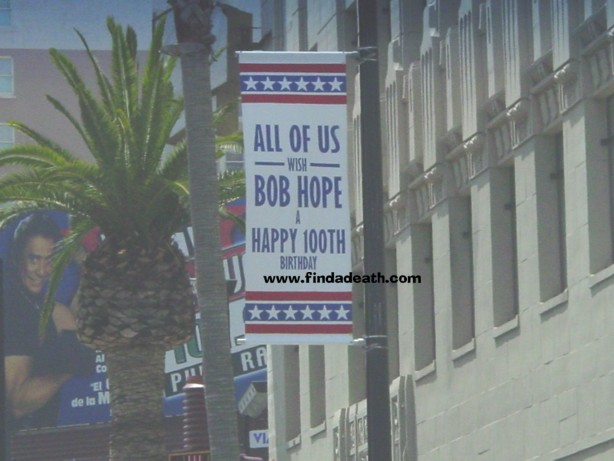 Said his granddaughter Miranda, “Despite his deteriorating health, he still expressed his good sense of humor, and was able to say he was still with us.” But not for long.

Bob and Do Do Hope were living his last years in their Toluca Lake home. Not much to see of it, but the roof here, 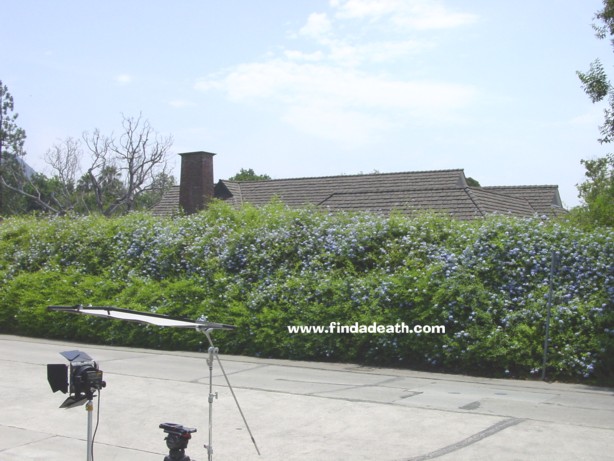 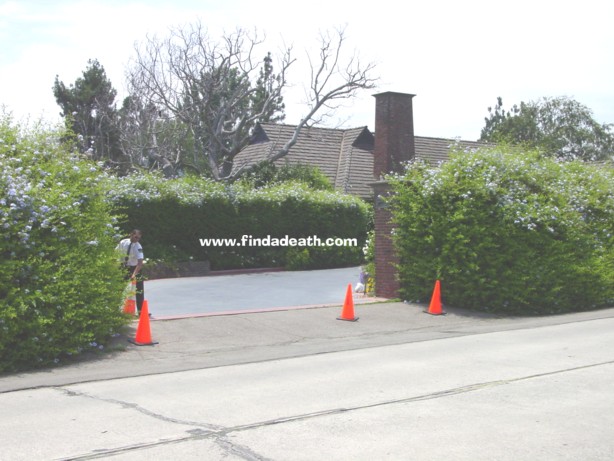 On Sunday, July 27, 2003, Bob died of pneumonia, with family present. According to his daughter Linda, “Dad had an amazing send-off. All of the family was together with him and he died very peacefully last night, just about 9:30. I don’t think you could have asked for a more peaceful, beautiful death. And I think all the good vibes that he put out during his lifetime came back to take him up. He left us with a smile on his face and no last words. We all had our little time with him and time to say good-bye. And he just gave us each a kiss, and that was it.” 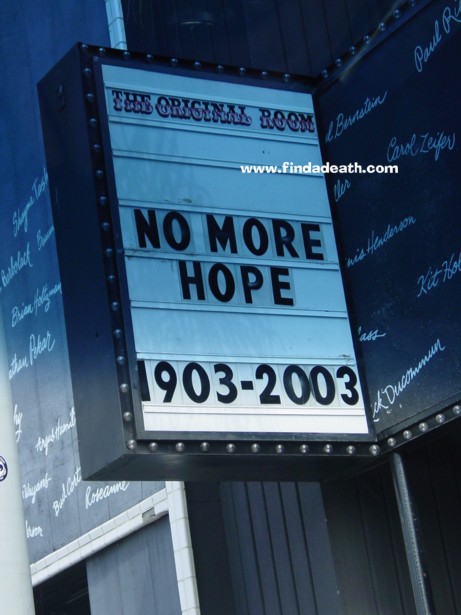 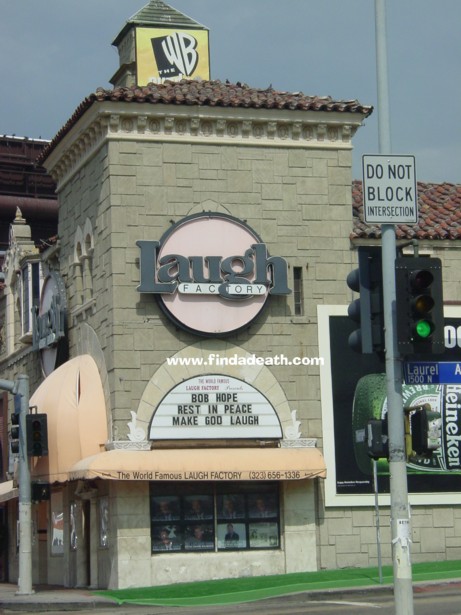 Flowers on his star. 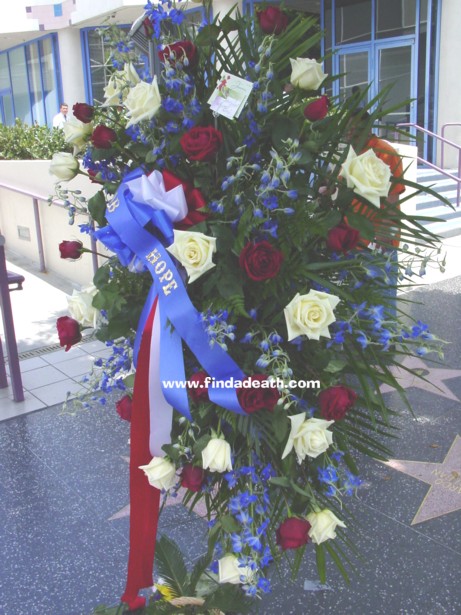 There were news cameras at his house, 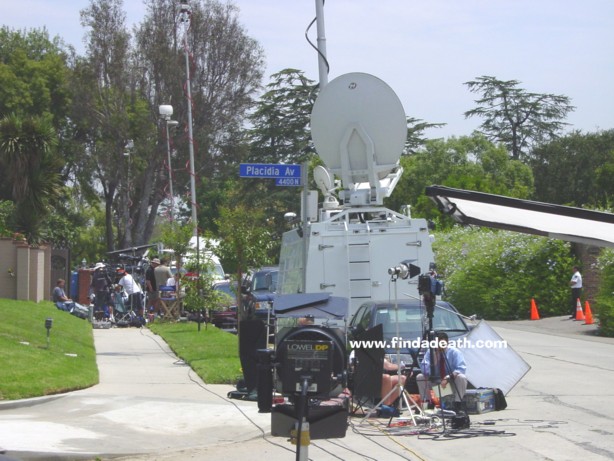 and parked on Hollywood Boulevard. 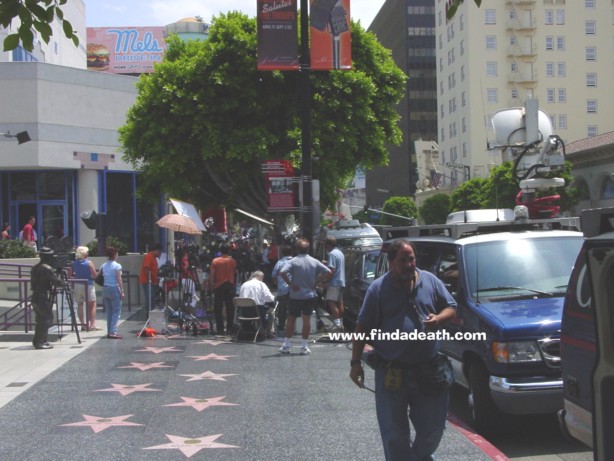 Said President Bush the next day, “Bob Hope made us laugh, and he lifted our spirits. Bob Hope served our nation. … He went to battlefields to entertain thousands of troops from different generations. We extend our prayers to his family, and we will mourn the loss of a good man. May God bless his soul.”

Hope was buried on August 28th, in a private ceremony, in San Fernando Mission Cemetery, in Mission Hills, Los Angeles. His career in show business lasted for eighty years. Bob is currently in a secret location, while some enormous shrine will be built to honor him.

Seeing that he lived to be over 100, I’m sort of surprised that it wasn’t completed already.  They do have this section, which for some reason I am positive Bob paid for. 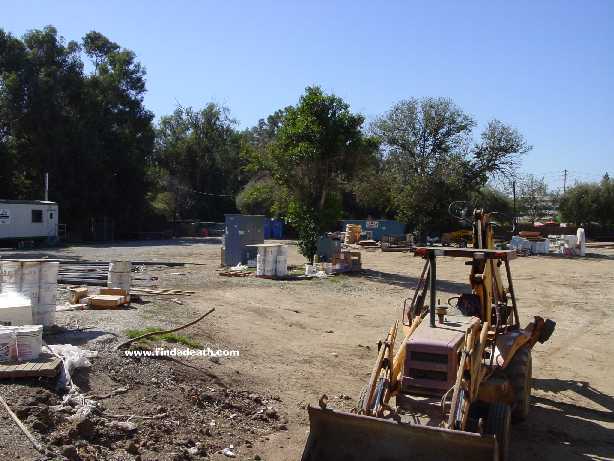 Thanks Jayne Osbourne for braving security and getting this great picture. 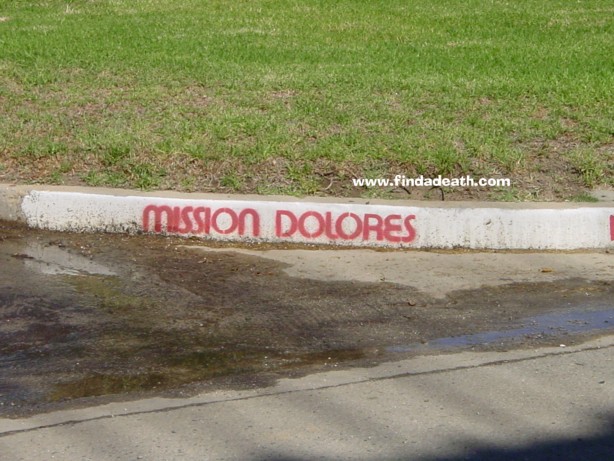 My friend Lisa sent a condolence card to Dolores, 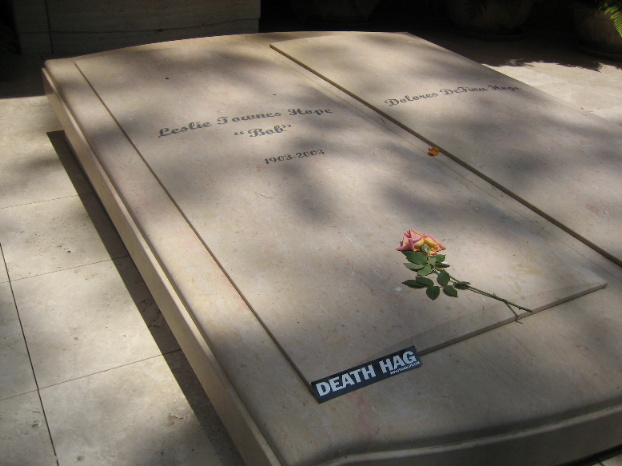 and received this nice card in response. 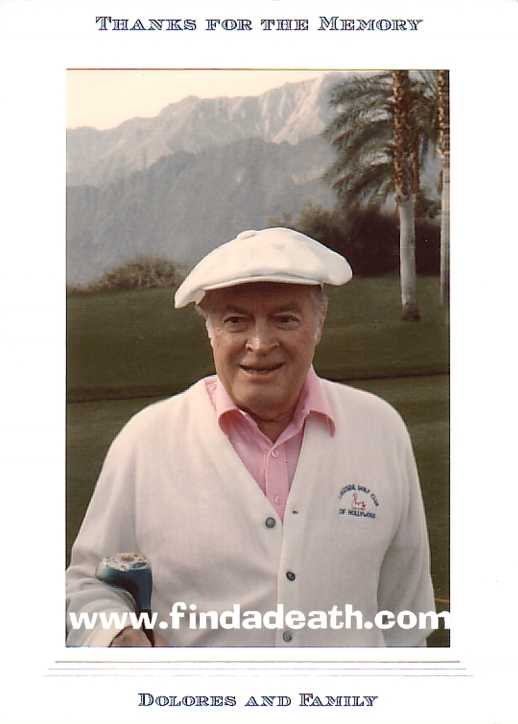 He was reportedly the richest man in show business, reportedly worth $500 million in 1975.

He owned the entire State of California.

President Clinton named him an honorary U.S. veteran in 1997.

He was a part owner of the Cleveland Indians in the 1950s.

He received five honorary Academy Awards in his lifetime.

He received the Congressional Gold Medal from President Kennedy, and Queen Elizabeth II knighted him in 1998.

He was a professional boxer for a time, under the name Packy East.

People often ask me why I detest Bob Hope. I have met him, he wasn’t particularly rude to me, but friends of mine found him extremely rude. I pretty much equate him with Milton Berle, though not nearly as pervy. To my common knowledge. Hiswomanizing is legendary, and his best pal Bing Crosby (don’t get me started) says enough, I think.

Findadeath.com friend Elle sends us this:  I was watching Home Shopping Network, and laughing my ass off at Suzanne Somer’s gawd-awful jewelry when she started talking about Bob Hope; she went with him on some of his USO shows.

She said he really loved his dog–apparently the pooch would be chauffeured to Bob’s shows during intermission in a limo. Also, she talked about how her roommate in college was Bob Hope’s daughter. They were best friends, and she was Susanne’s son’s godmother–and later stepmother when she married Susanne’s ex-husband. They are now divorced.

I thought it was kind of interesting. –Elle.

Findadeath.com friend Rick the Courier sends this: On the day Bob Hope supposedly died, NBC Radio News played a sound byte of a celeb reacting to news of Hope’s death. The celeb in question? MILTON BERLE!!! Who died years before!

Hmm…maybe there’s truth in the rumor that Hope died years ago and they were trying to make book on him making it to 100. One of those things that Arsenio used to say “Make you go “Hmmm…”  — Thanks for all the hours of fun, Rick the courier

Also this: I have a lady friend around 60 years old. I wrote her and reminded her that it was Bob Hope’s 100th birthday. This is what she had to say about him:  I met Bob Hope back in the late 50’s. I was in the Drum and Bugle Corps, and we had to play for his arrival at the theater. He was obviously drunk, and didn’t have too much to say that was nice. I wasn’t impressed, but I do congratulate him on his longevity. — Thanks again, Scott. I continue to check your site on a daily basis. I’m like a little kid who can’t wait. Take care-Rick

And this: Here is a picture that had Bob Hope toking off a hooka that Bing Crosby is holding.
The first thing that popped into my head was “Thanks For The Hooka” 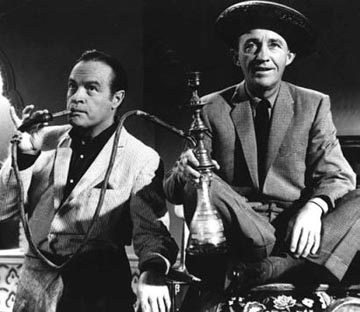 P.S. On the news this morning I heard that when Bob Hope’s family asked where would he liked to be buried, he replied “Surprise me.”

And of course the always witty Findadeath.com friend Dorritt adds this:  I cracked up when I heard Pat Boone (Mr. Born Again) discussing Hope’s “clean entertainment.” Yea, having buxom women shimmying for the boys, making sexist remarks, is real clean entertainment. Plus, the guy had someone else write his funnies. Guess I was never into Mr. Hope.

My mother lived in Hollywood in the 40’s and 50’s, and worked at Grauman’s Chinese Theater as an usherette during the Hollywood Cantana heydays. She hung out with some of the best comedy writers in town.

It was common knowledge in those days one of the starlets Hope screwed around with, committed suicide over the affair. He apparently took great delight in telling her that she wasn’t enough of a woman for him to leave his wife over. I cannot remember her name, but there were a number of comedy writers that befriended her and saw his rough treatment of her in public. No one had the balls to say anything to him.

My mother had spent time with her and adored her. To her dying day, my mother would throw pillows at the TV whenever Bob Hope came on. People talk about Sinatra being scary. Bob Hope could destroy a person’s career in one phone call. People were afraid of him.

My brother works in a hospital in Palm Springs, CA, and some years back used to work with this fellow who had an opportunity to caddy for Bob Hope, when he was a teenager.

According to this fellow, Bob Hope was a real tightwad. After caddying for Mr. Hope during a golf classic, he was supposedly paid for his services with a bag of pennies. So I guess besides owning a large portion of California, he must also have had interests in copper mines.

Thanks to Lisa Burks for this amazing shot. 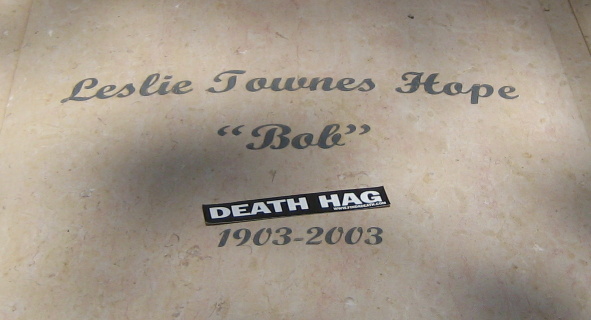