There are people who were upset because Brad didn’t get a nod in the 2008 Oscars ceremony obituary segment.  True: He was an actor and was in 21 films.  He did work with Oscar winners. Um …  annnnd that’d be about it.  If it is any consolation, Yvonne DeCarlo missed the cut as well.  You can read about Brad’s acting career here.

I have no doubt he was a very nice kid.  Most people who knew him thought so.  His friends called him by his nickname, “‘fro.”

Shortly before his death, Brad had the phrase,  Fuck All Ya’ll tattooed on his upper back. Clearly Brad didn’t think he’d live to a ripe old age.  Clearly.  Had he been thinking of the future, he might have considered one day being in a nursing home and needing some maintenance back there. The nurse might just read that, interpret the message, and let him sit in it. I would. 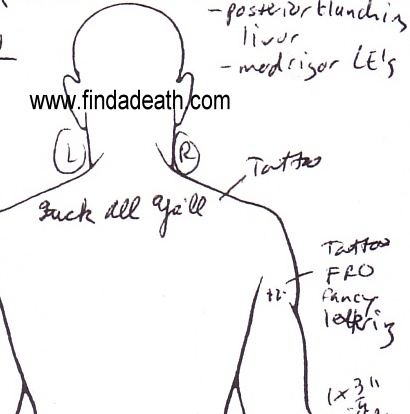 That being said, according to a pal of Brad’s, Renfro was a Death Hag and read Findadeath.com on a regular basis. He even told his friend that one day he would probably end up on it. Guess what?

Welcome to the fold, ‘fro.

According to his friends, for a couple of years before his death, Brad was spiraling out of control. He had been arrested in a highly publicized heroin sting in downtown LA.  He got wasted, hotwired a yacht and gunned it not realizing it was still tied to the dock.  His drug use was out of control.

By 2007, he was trying to beat drugs and booze. He moved in with his girlfriend and her cousin in this apartment building in the Wilshire district. Brad was considering leaving acting and going into a more mainstream career, and spending time with his son. He had recently spent the holidays with his family back in Tennessee.  They are no doubt eternally grateful for it. 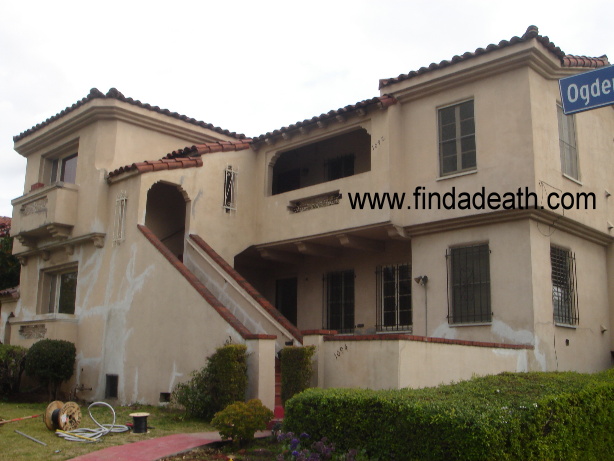 Back in Los Angeles on the night of Monday, January 14th, 2008, Brad was drinking heavily.  He made a comment about taking a Vicodin or possibly Xanax. They went to sleep about 2 a.m. On the morning of January 15th, Brad’s girlfriend left around 9, hearing Brad snoring. The cousin must have found him lying unresponsive on the bedroom floor. She dialed 911 and made this call at 10:52 a.m.

Paramedics arrived and pronounced him dead at 11:04 a.m. They found an open bottle of bleach in the (neat and well-furnished) apartment, which led them to consider a drug-related death.  (Bleach is used for cleaning needles.) It wasn’t until the autopsy results were released, that it was confirmed. Brad had died of acute heroin/morphine intoxication. 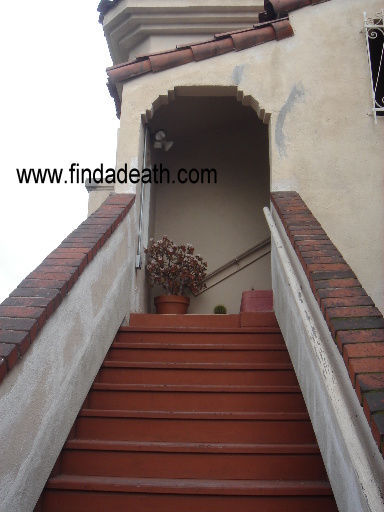 When the news hit, the nice folks at E! spelled his name wrong.

On the 21st of January, a memorial was held for Brad in his hometown, Knoxville. There was a closed casket funeral the next day, and a graveside service at the Red House Cemetery in Blaine, TN.  It would be distasteful to point out the drug store in the background. 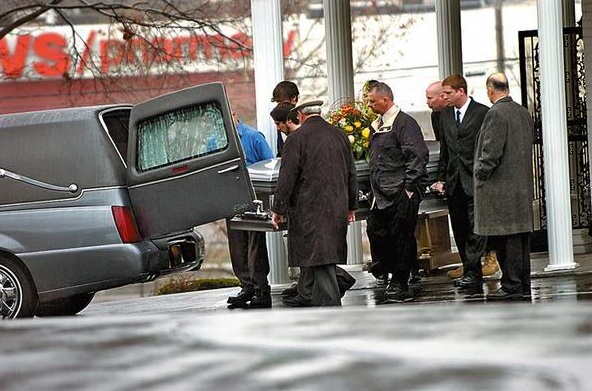 January 2009 was the one year anniversary of Brad’s demise.  ‘Fro now has a spiffy gravestone.  People gathered to celebrate his life.  Findadeath friend Lisa Burks sends this:

It was a moment that friends and family felt Brad Renfro could’ve
appreciated.

While a small crowd that included his mother, grandmother, stepfather,
little sister, cousins, friends and fans huddled around Renfro’s grave
in 20-degree weather on Thursday, Led Zeppelin’s “Stairway to Heaven”
blasted from a car stereo parked in the graveyard.

“Acting was his job, but his No. 1 thing was music,” said Angel Olsen,
Renfro’s mother. Renfro’s gravestone has a guitar engraved on it.

The Knoxville-born actor died at age 25 of a heroin overdose at his
home in Los Angeles on Jan. 15, 2008. Olsen organized a short
graveside memorial at Red House Cemetery in Blaine to commemorate the
date of her son’s death.

Friends and family laughed in the bitterly cold wind, sharing stories
of a mischievous child and a generous adult.

“We’d be walking on the street on a cold day like this, he’d see a guy
down on the sidewalk, and he’d get down in the cold with him and pray
with him and then go buy the guy a bottle of gin and come back and
pray with him,” Franklin said.

Fan Patrick Broyles drove 258 miles from Winston-Salem, N.C., to be
part of the memorial.

“I just thought he was an incredible actor,” said Broyles. “I wanted
to be here to show support to his family.”

Before the memorial, Olsen said she keeps in regular contact with
Renfro’s young son and the boy’s Japanese mother, but she kept visits
secret for the boy’s protection.

Olsen said Brad would’ve enjoyed family and friends weathering the
cold for him: “He would’ve loved this attention.”

Thanks C. and Harry