My wife said to me, ‘I want to be cremated.’ I said, ‘How about Tuesday?’
A comedian sees the world bent. I’m tangent to the circle.
I’ve had a few arguments with people, but I never carry a grudge. You know why? While you’re carrying a grudge, they’re out dancing.
Golf is more fun than walking naked in a strange place, but not much.
I have the gift of laughter. I can make people laugh at will. In good times and in bad. And that I don’t question. It was a gift from God.
Ninety-nine percent is in the delivery. If you have the right voice and the right delivery, you’re cocky enough, and you pound down on the punch line, you can say anything and make people laugh maybe three times before they realize you’re not telling jokes.
I used to like to dig myself a hole just to see how long it took to get out of it.
As a child my family’s menu consisted of two choices: take it or leave it.
You want to know what makes me tick, I’ll tell you what makes me tick. I was a boy growing up in Brooklyn; I read a two-penny magazine called ‘The Hawk’s Nest.’ Nobody entered that nest that didn’t leave a little richer and a little wiser. And that 11-year-old boy said, ‘Isn’t that a wonderful thing.’ And that’s all there is to it.
I was born to be funny.
Show More Quotes
Show less

Buddy was born Leonard Hacker, and after serving in the military he started doing stand up comedy.  He went on to have a career that lasted for sixty years. He appeared in many movies, from Herbie the Love Bug, to It’s a Mad, Mad, Mad, Mad World, alongside Milton Berle and Jonathan Winters, and on TV as well.

In 1996, buddy had a dizzy spell during a show, and stopped doing live performances.  He had discovered considerable success doing voiceovers in animated features like The Little Mermaid for Disney, and its sequel. He also appeared on Craig Kilborn’s show, and had a role on the short-lived television series, Action.

Buddy and Sherry, his wife of 48 years , lived in this house in Beverly Hills. 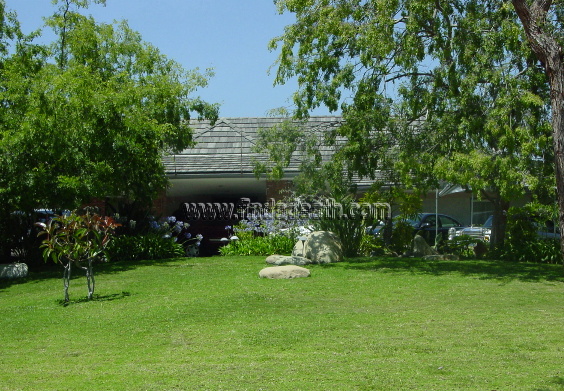 Buddy wouldn’t sign an autograph for a fan unless you gave him 10 bucks for  the Singita Animal Sanctuary, a nonprofit organization he and his wife Sherry founded, dedicated to the rescue and adoption of abandoned cats and dogs.  They filled their tennis court with stacks and stacks of animal crates for strays, and had their garage brimming with cans of cat food. 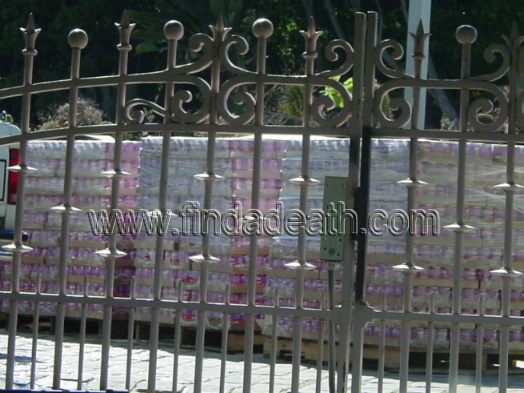 Sadly, the Animal Sanctuary declared bankruptcy in 2007 after the passing of Buddy.

Buddy had diabetes and bronchitis, and on Sunday, June 29th 2003, he left their Beverly Hills house to avoid catching his wife’s flu, and headed to their Malibu beach house.  As you do.  The beach house is on the other side of these gates. 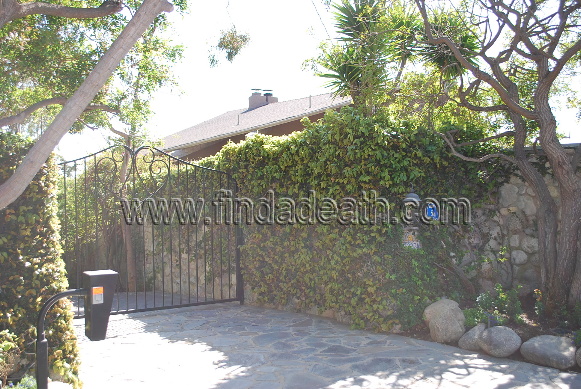 After scrambling through the no-doubt-rattle-snake-infested-wooded-area-next-door, this is the closest Troy and I could get to the house. 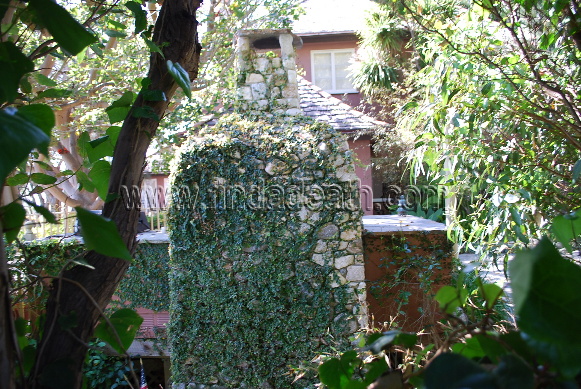 Sherry phoned later that evening to check on him, and his last words to her were, “Too late.  I’ve already got it.  I feel awful and I’m going to bed.”  Failing to reach him by phone the next day, his wife called the fire department and had them check on him.  Buddy was found dead of a heart attack.   I wonder if dying might be less difficult, if the last thing you saw was a view like this. 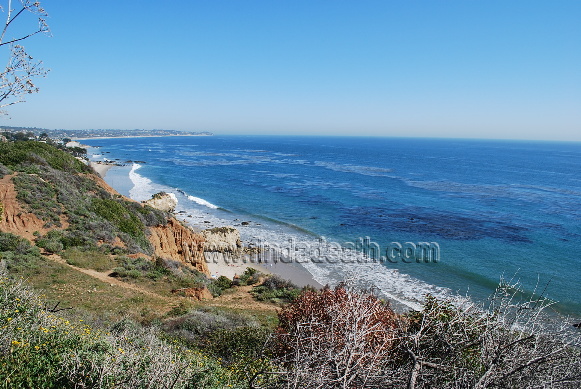 Keeping with tradition, The Laugh Factory on the Sunset Strip erected their memorial sign. 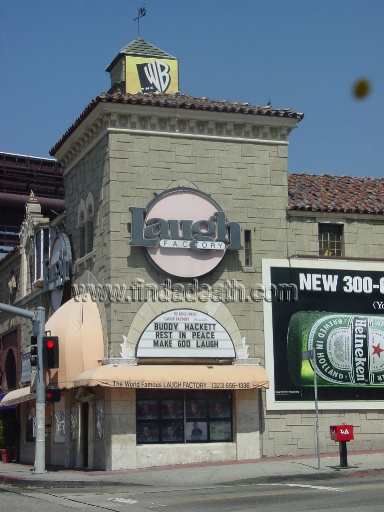 Buddy was cremated, and his ashes were given to his family.  There was no public memorial service.  The location of his cremains is a mystery.

Dead Man’s Curve (ish): Jan Berry of Jan and Dean had his near fatal car accident about 50 yards from Buddy’s front door.

On the front lawn of Buddy’s Beverly Hills home, sits a concrete elephant. 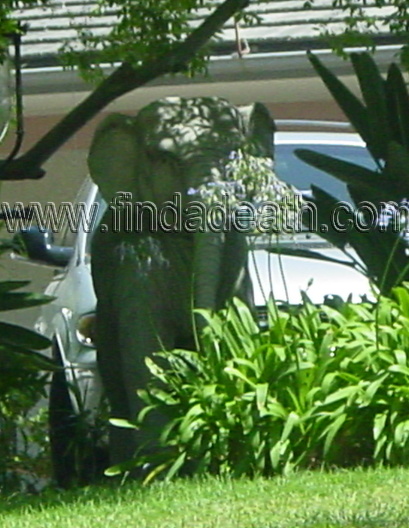 This was a gift from Sammy Davis, Jr.  For quite a while after his death, Buddy’s Mercedes remained in the driveway of the Beverly Hills house.  Note the vanity plates. 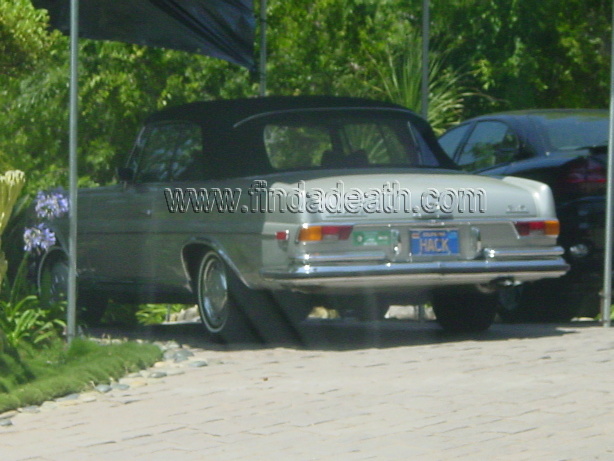 Buddy was offered the chance to replace Curly Howard in the Three Stooges, but he passed, preferring to pursue his own style of comedy.

He wanted $150,000 to appear in It’s a Mad, Mad, Mad, Mad World, but he only received $105,000.  There is an odd museum here in Hollywood, and inside of it is the original miniature model of the building from IAMMMMW, 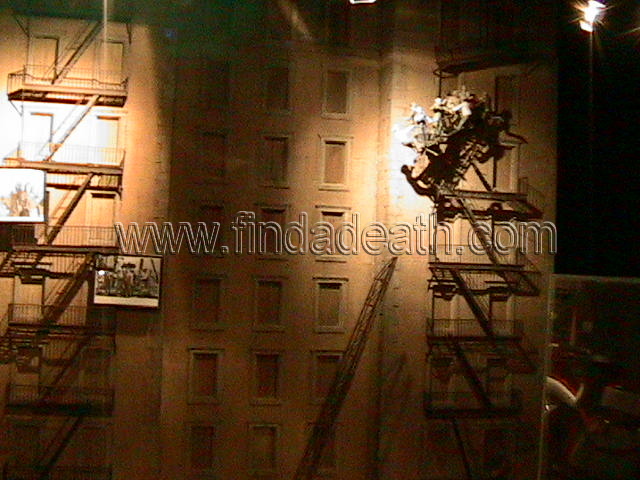 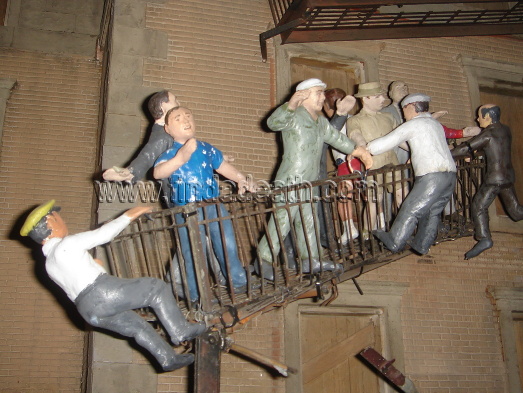 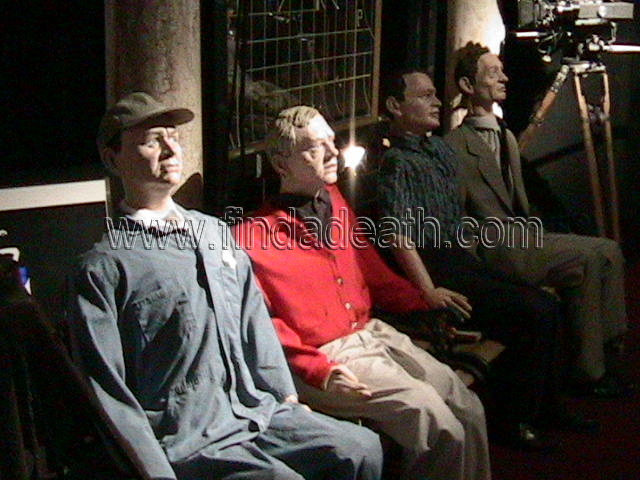 A VERY unique place, and a cool find.  I want it.

Buddy’s official website has been shamelessly hijacked by the son.  Nice guy – I met him in Vegas, but really a shame.

Buddy’s Malibu Death House went on the market about a year and a half after his death.  They were asking 4 to 5 mil.  It would have been mandatory to disclose the fact that Buddy died in the house, because it falls under the three year rule.  Did you know, in the state of California – even it the Manson Murders happened there, you are only obligated to share this information with prospective buyers, for three years?

Read about Buddy’s oral contract at my buddy Joe’s blogsite.

My gal pal told me that she was once a teen usherette in 60s Baltimore at a theater where comic Buddy Hackett and singer Anthony Newley were appearing.
After the show, my petite cute little friend (age 17) was invited into their dressing room. The door was promptly shut and the two male stars (in bathrobes) were more than happy to give an autograph in exchange for a kiss and a little grope of her teen ass. She got out of there within an inch of her life. She said it was shocking. ha
Cut to: It’s 30 years later, Fall 2002, and the same gal pal (the former usherette) is working on a TV studio lot in Los Angeles where Buddy Hackett was invited to come by to do a video testimonial for the 90th Bday party of reporter Irv Kupcinet. Buddy showed up and was a delight. My lady friend with her teen trauma tale even posed with him for a photo. How L.A.
Buddy was wearing white gloves that day (perhaps a germaphobe or fighting a skin ailment?) and within 7 months, Buddy was dead.

The last thing he jokingly said before he left the soundstage was: “Well, I gotta go home now, and do nuttin’.”
A 1983 Van Tour Tale: Buddy battled with snooty neighbors in Beverly Hills. When they once complained about a pink flamingo on his lawn – he responded with dozens of plastic birds added to piss them off more.

Trivia:  Buddy sang and danced in the “Shapoopie” number in the film The Music Man(1962)  – which was later paid homage by cartoon character Peter Griffin on Family Guy. 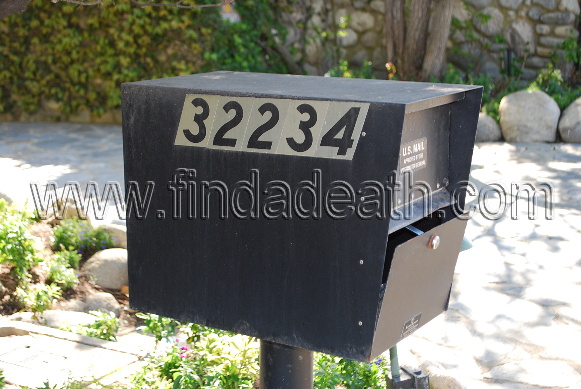 Thanks a ton to Kevin Hassell for help with this story.