My friends call me Ben, strangers call me Mr. Siegel, and guys I don’t like call me Bugsy, but not to my face.

It is common knowledge that Bugsy is pretty much responsible for putting Las Vegas on the map. Truthfully, there was already a casino being built there by a man named Wilkerson – before Bugsy got involved. Wilkerson had a gambling problem and he ran out of money, and Bugs saw the money signs and took controlling interest in the endeavor. (I’ll have THAT, thank you.) Using investments from the mob, he took over the plans to build the first casino resort. Unfortunately, the budget ran way over, plus Bugsy was suspected of skimming. The mob was not happy, as they had already fronted about 5 million dollars into the project. Long story short, when Vegas started turning a profit, the mob decided they didn’t want Bugsy involved any more, so they retired him.

On June 20 1947, Bugsy was staying in the house rented by his girlfriend Virginia Hill at 810 Linden Drive, in Beverly Hills. 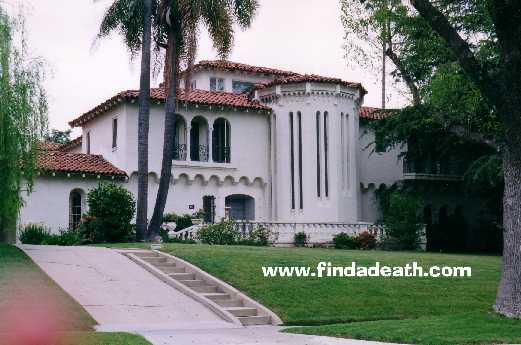 Virgie was Bugsy’s moll, and they had one of those relationships where they were either tearing each other apart, or screwing like insane rabbits.  I like the front door of the house, which is quite distinctive. 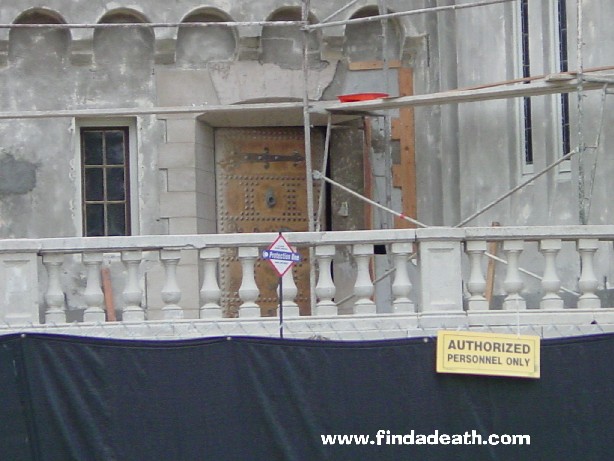 Virgie was out of town though, and although I do believe they did love each other, she and Bugsy had a falling out, they broke up, and she fucked off to Paris. There are those that say it was highly recommended to her that she “leave town for her health.”

So Bugsy is reading the LA Times in the living room, around 10:30 at night. This is the outside of that room. 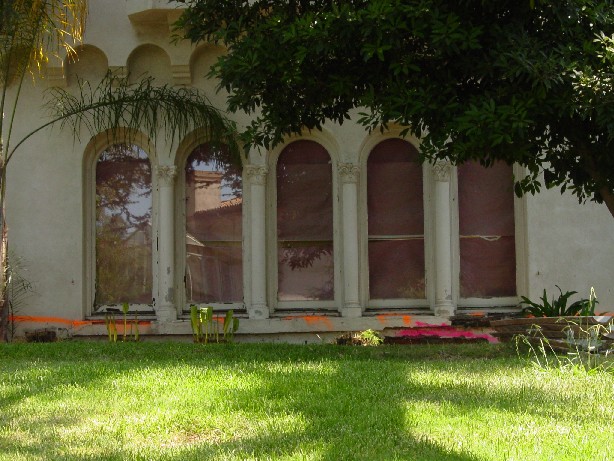 Meanwhile, the person who is going to kill Bugsy is sneaking up the driveway of the house next door, and aims through the side window. 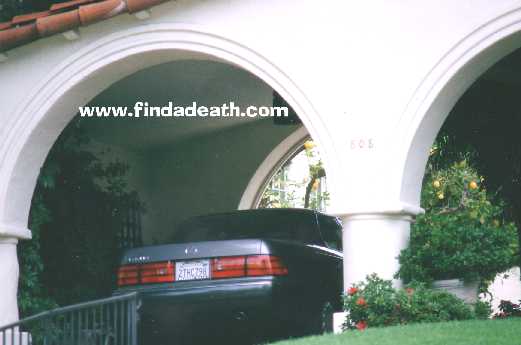 Depending on which report you read, there were either 8 or 9 shots from a .30 caliber rifle, and either 3 or 4 ended up in Bugsy’s head (WARNING – Oogy Picture). Most reports agree that one shot blew his eye clear out of his head, across the room like a superball. He died immediately of cerebral hemorrhage.

Bugsy was taken to the coroner (WARNING – oogy picture) where the autopsy was performed. 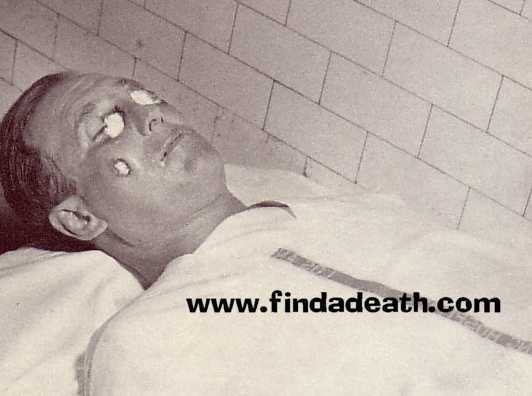 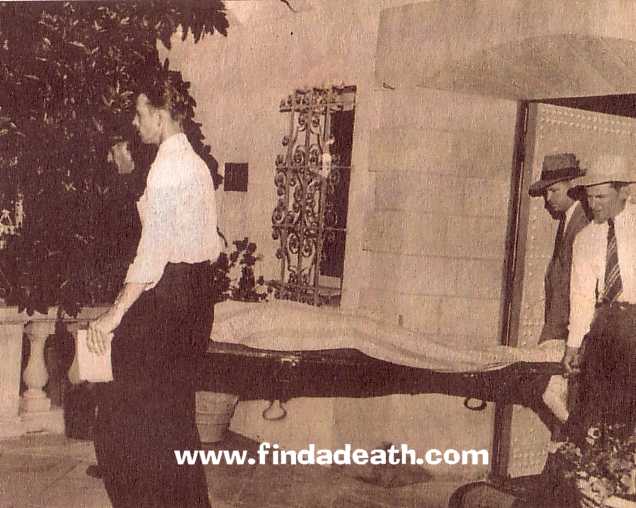 Amongst his possessions at the time of his murder were a billfold with 408 dollars in cash, a watch, money clip, key chain (with 6 keys, one being a hotel room key), a ring and a pair of cufflinks. Thank you Roger Sinclair for that.

He was put in a $5000.00 casket and interred in the Beth Olam section of Hollywood Forever Cemetery. Only 5 family members showed up to the service, which took place before the cemetery opened. 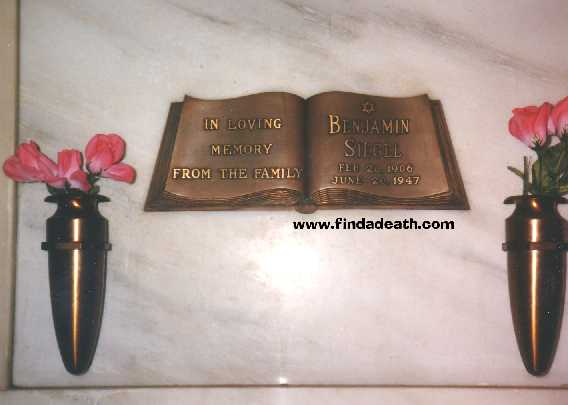 Virginia was living in Europe after that, and never spoke of Bugsy after his murder. It’s quite likely that she did love him, and was mourning. It’s also quite likely that she threw him under a bus, and felt guilty. Whatever the reason, she died in 1966 after swallowing a handful of sleeping pills and walking into a snowdrift in Austria. As you do.

Some years later, I read an article about a writer who was approached by an ex gangster named Eddie Cannizzaro. Eddie found himself fascinating, and wanted to earn a quick buck selling his story to this writer. The writer was not impressed enough, so Eddie brags that he would reveal that he was the one who killed Bugsy. The writer perks up, then informs Eddie that there is no statute of limitations for murder. Eddie decided to keep his trap shut until his death bed. As far as the police are concerned, the murder is still unsolved.

From the August 2003 from the LA TIMES Hot Property section:

The couple bought the five-bedroom, 7,000-square-foot Spanish-style home for about $4 million. The house, built in 1928, hadn’t changed hands since 1951, when a lawyer and her husband, a surgeon, purchased it. When they bought the house, they didn’t know that it was where Siegel had been gunned down, the lawyer said in 1998, when the house was first listed. The asking price then was $3.5 million.

“Disclosure laws weren’t as stringent as they are now,” the lawyer said at the time. “We moved in with our baby and then found out about the murder. So we called the police and asked if we were safe. They laughed, saying, ‘That was four years ago. Bugsy is dead and gone.’ ”

The house is going through MAJOR RENOVATIONS. 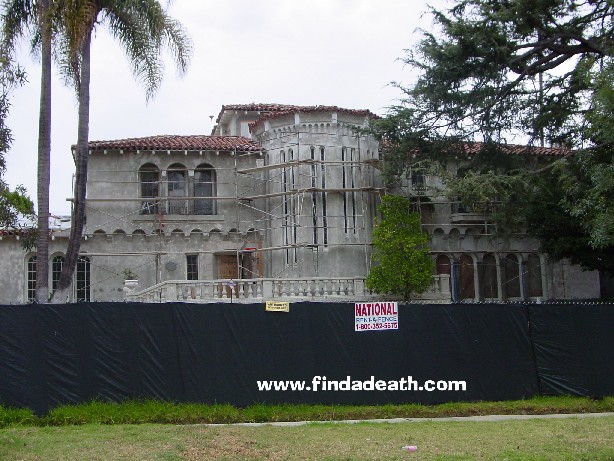 Findadeath.com friend E.J. Fleming sent in these terrific pictures of one of the bathrooms of the house, which appears to be just above the room where Bugsy was assassinated. 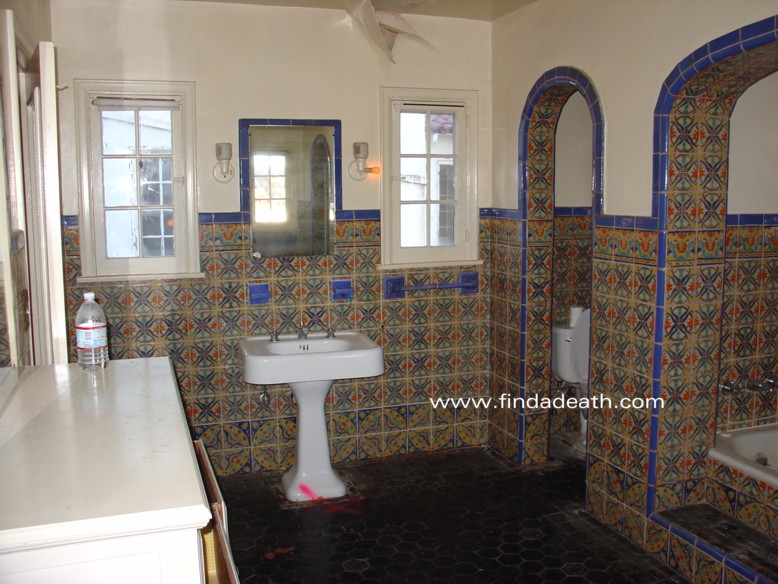 E.J. Even donated some tile to the Findadeath archives, where eventually I’ll have some sort of museum for all this stuff. 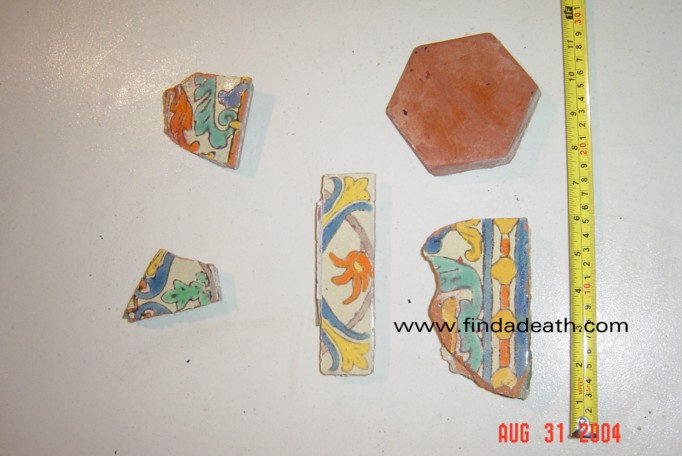 The new owner is indeed doing renovations, and is restoring the original front door.