Black is such a happy color.
I’m in love with everything about show business. The only thing that ever came easy to me in life has been acting.
The best thing about me is that I am generally very honest – not hurtfully honest, but honest. The worst thing about me is that everybody can make me feel guilty. I feel responsible about things that don’t even concern me.
The theater is a kind of international language, and I like it. But I have a practical bent of mind, too. In any other field, I could make only about a tenth as much as I do acting. That’s why I want to be a producer. It pays better, and you have more control.
I like men. I like the sound of their voices, the way they think. They’re more sensitive than women. With a woman, everything is either this or that, black or white. But a man can see shades of gray. That’s what I call being sensitive.
Show More Quotes
Show less

We knew her best as Morticia Addams on the 60’s TV show The Addams Family. Her role in the Vincent Price 3-D House of Wax is worth mentioning as well. She was also cast as a “ruthless, filthy rich, old broad” (her words, not mine) on the show Capitol, but had to drop out after the first season, because of her illness.

Carolyn Jones was born and raised in Amarillo, Texas, but had dreamt of going to Hollywood since childhood. She excelled in speech and dramatics in high school, but she felt out of place in the Texas Panhandle. She graduated at age 17 and faked appendicitis to get out of graduation ceremonies. Her step-grandfather paid for her education at the Pasadena Playhouse, although she often claimed to have financed it herself with a stint as a radio disc jockey. Soon after graduation, she married fellow Pasadena graduate, Don Donaldson, but the couple separated weeks later. Despite her training as an actress, Carolyn couldn’t find work or representation. By the time their divorce was final, Carolyn had endured painful plastic surgery, a nose job, and soon after found an agent, offers, and several men who suddenly wanted to date her.

Carolyn’s second husband was Aaron Spelling who was then a struggling actor, but she threatened to leave him if he didn’t give up acting and pursue what he truly loved, writing. As Aaron became more successful, Carolyn saw her own career slowly decline. The couple separated in 1964, the year Carolyn, at Aaron’s urging, took the role of Morticia in The Addams Family. Despite their split, Aaron was grateful for Carolyn’s help during their lean years, and he repaid her with career advice and job offers.

In 2013, new color photographs of the Addams Family set surfaced.  These were taken by photographer, Richard Fish. 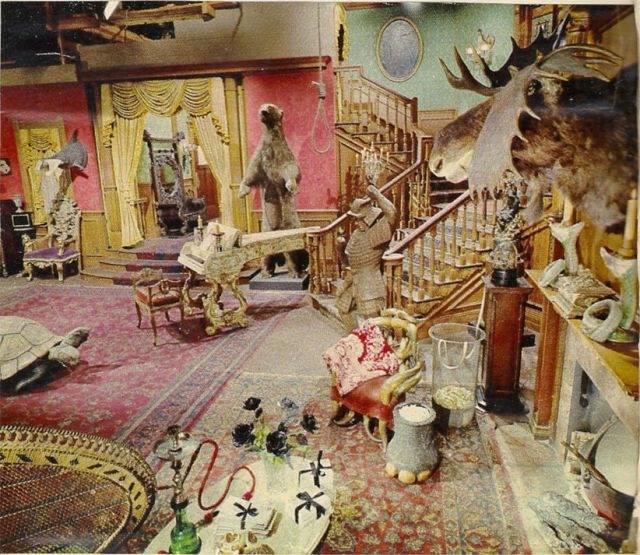 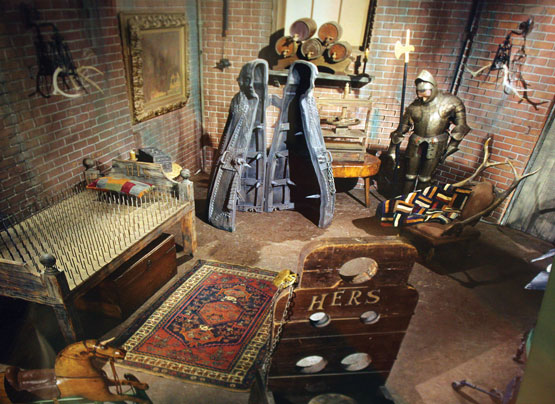 After The Addams Family ended, Carolyn grew dissatisfied with the direction of her career.

Her third marriage was to Broadway producer, Herb Greene, whom her friends blamed when she decided to leave Hollywood and move to Palm Springs. In her boredom and resentment, Carolyn wrote a novel, Twice Upon a Time, a scathing indictment of the film industry. With Greene, she authored another book, but writing was not her passion. She missed acting and wanted to return to Hollywood. By then The Addams Family had been off the air for a decade, and she had to take whatever roles came along. Her first return to the silver screen was a low budget thriller, Eaten Alive, which co-starred Robert Englund of Freddy Krueger fame. Carolyn left Herb Greene in 1977.

Carolyn was living in this sweet bungalow in West Hollywood, California. 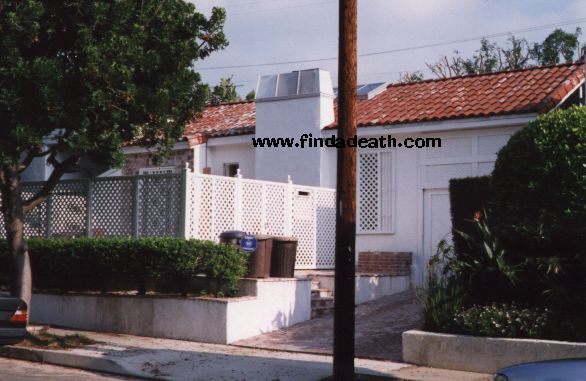 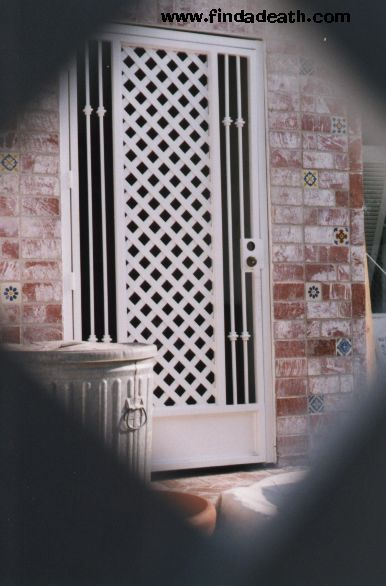 Carolyn had been diagnosed with colon cancer in February of 1981. She had vomited blood, and when doctors did tests, they discovered that cancer had ravaged her colon and spread to her liver. Surgeons removed two thirds of her colon, and Carolyn continued on, the best she could. She told friends that she was having treatments for ulcers.

In the meantime, Carolyn quietly went through treatment. She worked during the day, and went to the hospital for chemo at night. No one knew. She kept her illness a complete secret.

It seemed that the cancer had gone into remission, but in late 1982 – it returned and spread like, well, cancer. Doctors retaliated with massive injections of drugs, to no avail.

Seeing that the end was near, in October 1982 – Carolyn wed her boyfriend, actor Peter Bailey-Britton. She wore a lace and ribbon cap to hide the fact that she lost her hair to chemo. The wedding was attended by John Astin, Richard Egan, Jim Backus, June Allyson, Sally Struthers and Red Buttons.

The very next month, Carolyn, completely ravaged by the disease, fell into a coma in her home. She died there on August 3, 1983, with Alicia Buttons (Red’s wife) at her side. She was 53. 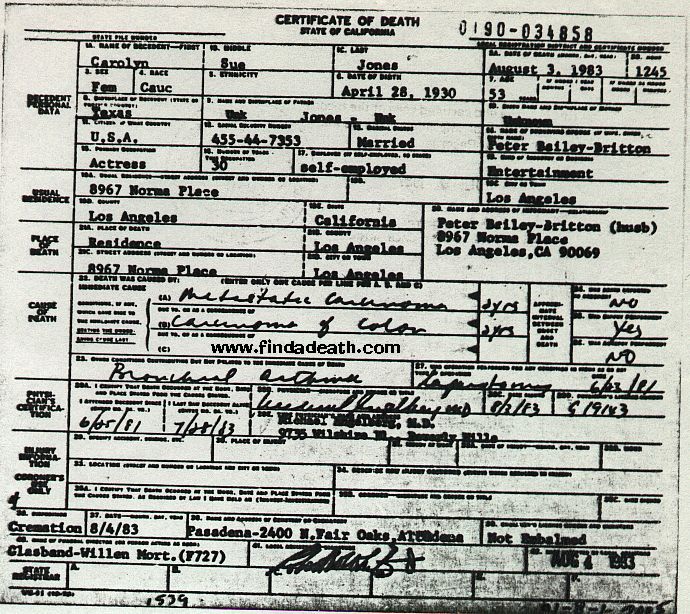 Carolyn was cremated the very next day.  There was a private funeral.  John Astin gave the eulogy and attendees included Carolyn’s family, June Allyson.  Aaron Spelling didn’t show, on the advice of his wife, Candy.

Carolyn was inurned with her mother in Melrose Abbey Memorial Park.  She requested that her urn be placed upon her mother’s casket, above her mother’s heart.

Trivia:  Carolyn donated her Morticia wig to the Academy of Mother Picture Arts and Sciences, never to be seen again I’m sure.

Trivia Announcement:  I think this is almost the greatest thing I have ever read:

Carolyn threw a Halloween party/engagement to celebrate her relationship with Budd Moss.

“The party, held in the backyard of her Beverly Hills home, was decorated with Morticia in mind.  “She arranged with the producers of The Addams Family to bring a lot of sets that they were able to move and put out around her swimming pool,” recalls Budd.  “and many people from the studio got dressed up as the characters from the show… I am almost positive that Carolyn did wear her Morticia outfit.”

A two-headed stuffed tortoise glided in the frothy waters of a swimming pool filled with dry ice.  Amide Addamsesque props like a guillotine and a mummy’s case, guests danced the watusi and the frug.  Among those in attendance were Lana Turner, Milton Berle, Danny Thomas, Jim Nabors, David Janssen, and Rod Taylor.  A special guest was Charles Addams, someone whom Carolyn’s Hollywood friends met for the first time.

One thought on “Carolyn Jones (The Addams Family)”