Insanity runs in my family. It practically gallops.
I pretended to be somebody I wanted to be until finally I became that person. Or he became me.
Do your job and demand your compensation – but in that order.
My father used to say, ‘Let them see you and not the suit. That should be secondary.’
Everyone wants to be Cary Grant. Even I want to be Cary Grant.
Ah, beware of snobbery; it is the unwelcome recognition of one’s own past failings.
Divorce is a game played by lawyers.
When people tell you how young you look, they are telling you how old you are.
My formula for living is quite simple. I get up in the morning and I go to bed at night. In between, I occupy myself as best I can.
To succeed with the opposite sex, tell her you’re impotent. She can’t wait to disprove it.
Show More Quotes
Show less

Find a Death friend Alan Light sends:  I had tickets to attend “A Conversation With Cary Grant” in Davenport Iowa on Nov. 29, 1986 – the night he died.

We showed up at the theater and were turned away by ushers who announced he had taken ill.  The next morning I opened the newspaper to find “A Legend Dies In Our Arms” as the headline.

The day after he died our local newspaper, the Davenport Iowa Quad City Times, published the very last pictures ever taken of Cary, including two photos of him on a stretcher being wheeled out of the lobby of the hotel he was staying at and into an ambulance.

I have never seen these photos published anywhere else, so they may be a valuable addition to your site.

Feel free to post them or circulate them however you wish; I’m happy to share them.
Great stuff, Alan.  Very kind of you.  Also, Alan sent us a couple of other articles, and one about the rehearsal.

On a related note, on September 30th of this year, a couple of pals of mine ventured up north for James Dean’s anniversary.  On the way, we stopped on this road,

where a cornfield used to be,

which is the exact spot that Cary filmed the famous crop dusting scene in North By Northwest.

In 1920 – he went to the United States with a troupe of acrobats, and that’s really how his career began.

This next part, the good stuff, comes courtesy of Findadeath.com friend Gary Thelen. Gary went all the way to Davenport to get these photographs for us, and even went to the local newspaper to get copies of the obituaries. With this story, and with the Buddy Holly story, Gary’s contribution to Findadeath.com has been monumental.  Thank you so much, Gary.

In 1986, Cary was living at 9966 Beverly Grove Drive, in Beverly Hills.  He was married to non-actress Barbara Harris at the time. Findadeath Friend Karen Bezman comes through with these great pics of  Cary’s home, 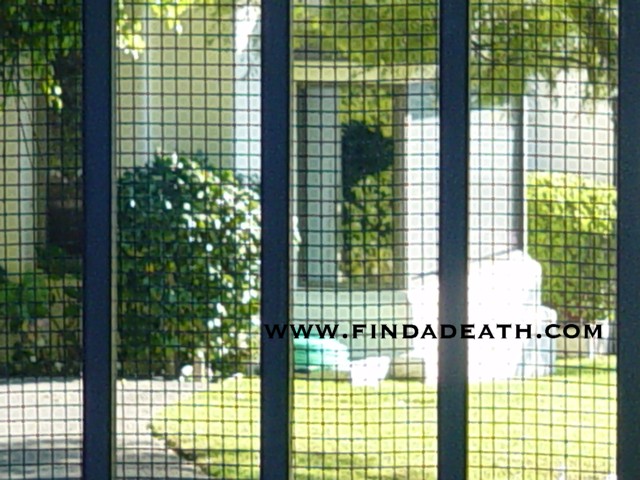 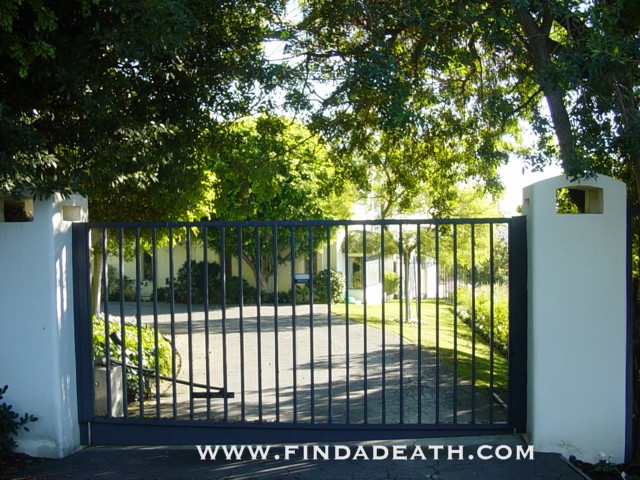 and mailbox with a view. 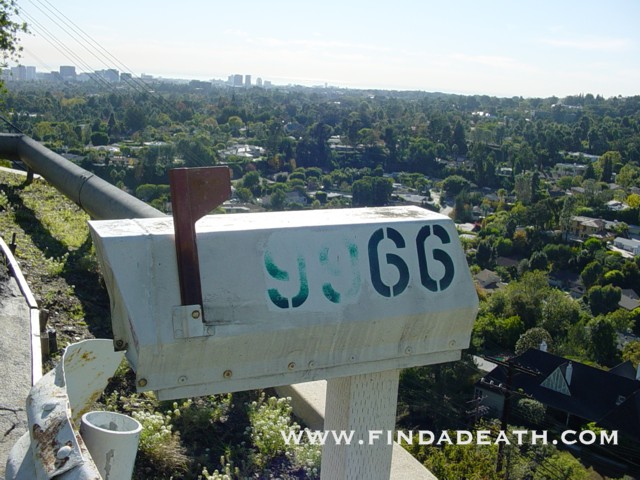 Cary was touring the country with “A Conversation with Cary Grant,” a lecture consisting of film clips and a Q & A session. His wife Barbara was traveling with him.

The couple arrived in Davenport, Iowa on Friday night November 28th, for a Saturday night show. They had dinner in their hotel suite at the Blackhawk hotel, now known as The President Casino’s Blackhawk Hotel. 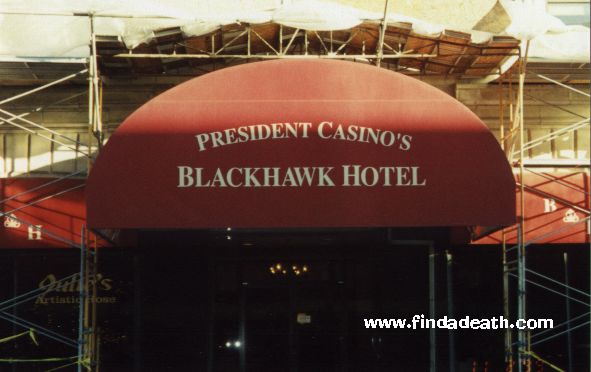 Saturday afternoon they toured the Davenport area, arriving at the Adler Theatre on 3rdStreet, for the 4 p.m. rehearsal (?), for that evening’s 8:30 performance. 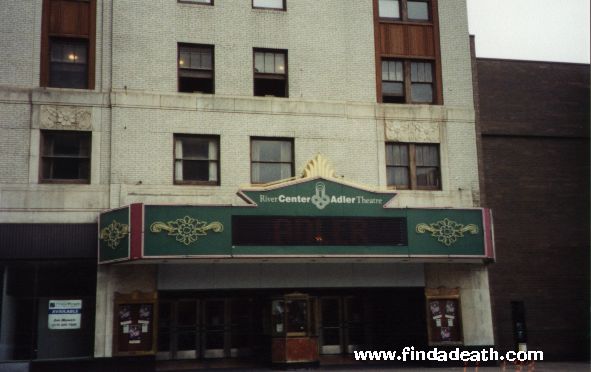 Cary and Barbara were in chipper moods all day, and according to most, they looked great.

Just before Cary began “rehearsing,” the event sponsor told Cary, “I hope everything goes OK with the show.” Cary replied, “What happens, happens.” A little while later it happened. Cary became nauseous, and began vomiting.  He also had a slight headache. He had to be taken from the stage to his dressing room in a wheelchair.  He stayed there for a while, but then left the theatre, 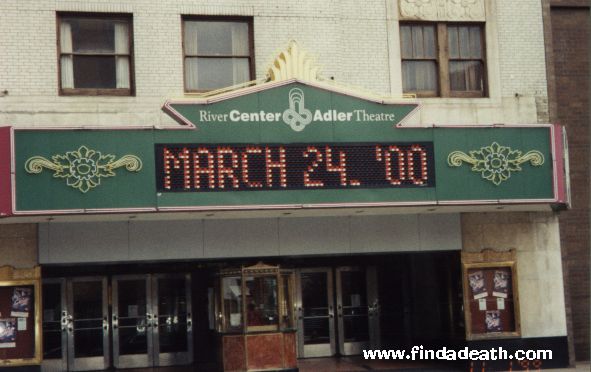 and went back to his hotel next door, at the Blackhawk. 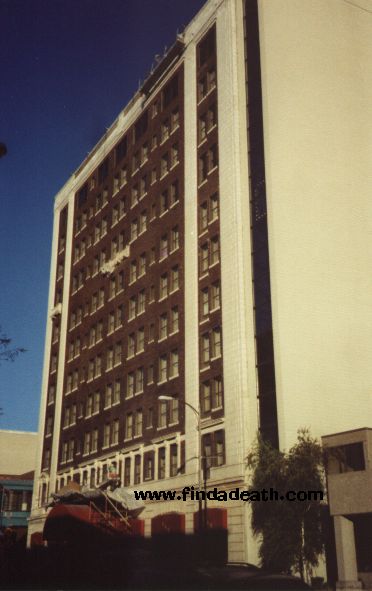 Cary resisted suggestions to call a doctor or go to a hospital, for fear of missing the performance. His condition worsened.

The performance was cancelled.

Two doctors were called in to examine him, and he was taken by ambulance to St. Luke’s Hospital at about 9:15. 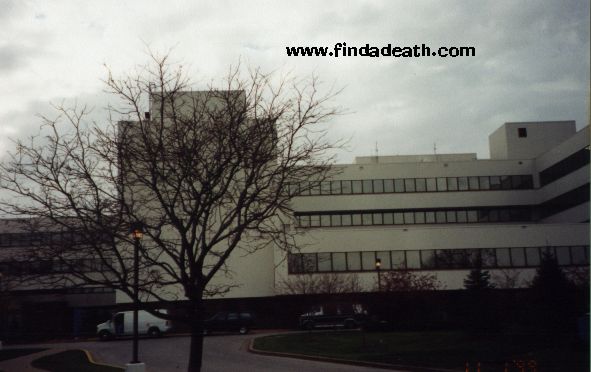 Cary was in a coma by the time he arrived. He went through about 45 minutes of tests, then was transferred to the intensive care unit.

Dr. James Gilson, a Davenport cardiologist, was on duty that night.  He said that the stroke was so massive that there was little doctors could do. He also mentioned that even if he had been brought to the hospital earlier, he probably would not have survived.

EXCLUSIVE TO FINDADEATH.COM – one of our Findadeath friends, Tim Odey, knows Dr. Gilson (now retired) personally.  When Tim asked the good doctor for details for us, his reply – “Cary was completely gone. Still alive, but his brain was so badly damaged that he couldn’t talk even if he was even able. One side was totally paralyzed, and his (pupils) were dilated.” Dr. Gilson also added, “Cary felt no pain, and the family were very nice throughout the ordeal, and thanked me for all that was done.”

Thanks Tim, and thanks Dr. Gilson.  That’s almost an endorsement from the guy that signed Cary Grant’s death certificate. We’re movin’ on up, guys!

Barbara Harris accompanied Cary’s body back to Los Angeles on a charter flight at 3 a.m.On Sunday he was taken to Burbank, and cremated by the Neptune society.

His ashes were given to his wife and daughter, Jennifer, whom he had with ex wife Dyan Cannon. I understand that they may have scattered the ashes on their property, but personally I find that unlikely.

In his will, Cary left his wife the house and his daughter a trust fund.  He also stipulated, “I desire that my remains be cremated, and there be no formal services to note my passing.”

I have no details of any funeral or memorial service.

Of interest: Was he gay?  I don’t know. There is a lot of speculation regarding Cary’s relationship with actor Randolph Scott. The two lived together at one point, and did a very famous photo shoot, with more than a little homosexual undertone. 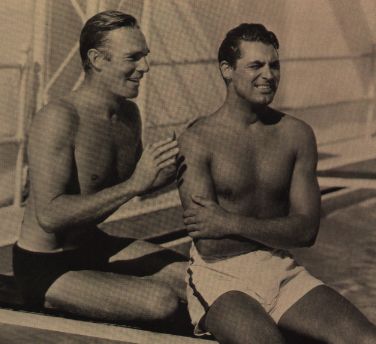 George Cukor once said in an interview with Boze Hadleigh for the book, Hollywood Gays, “Oh, Cary won’t talk about it. At most, he’ll say they did some wonderful pictures together. But Randolph will admit it – to a friend. He was a male nurse, you know (Scott was housebound in later years). He’s shown the nurse his scrapbook on Grant, and when the nurse asked him if it was true, Randolph just smiled and nodded…”

There was a documentary on the BBC recently about Cary Grant, and Randolph Scott’s son was interviewed. He stated some nonsense about his father and Cary never could have had an affair because his anus was checked when he was in the hospital, and you can tell.I swear to God. That is not a direct quote, but that’s what he said. I was speechless, now I’m not. What a stupid, stupid man.

I was in Bristol, UK and thanks to the information from Kieran Smith, I found Cary’s birth home.  It’s on Hughenden Road, at number 15.

Here is the front door, and the plaque that is added to the house.

Cary was born on January 18th, 1904.  Cary used to walk to the Fairfield School (quite a distance) as well.

Here is a terrific view of the school.

Cary would walk through this bridge to the school,

and enter it here.

Thanks so much Kieran, and I have to thank my friend Stuart for taking this trek with me.

As a yungin’, Cary worked in a theater called The Hippodrome, in Bristol. 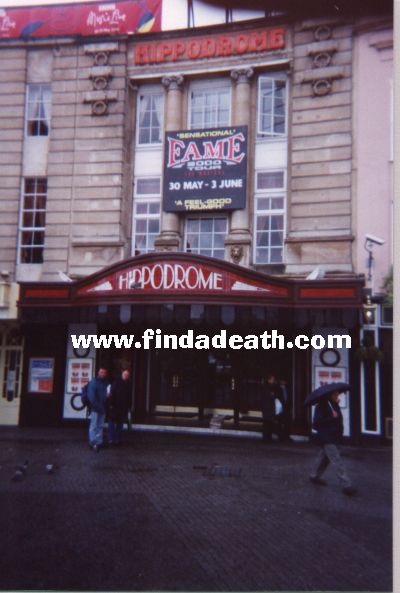 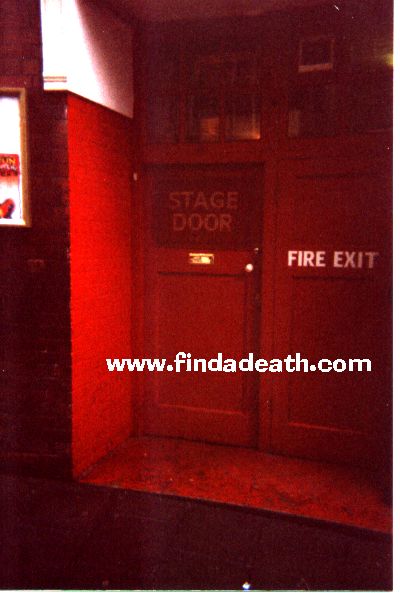 Cary Grant: According to Arthur Laurents, who wrote West Side Story, and Hitchcock’sRope, has said that Hitchcock considered Monty Clift for one of the young killers in Rope, and Grant for the role that eventually went to Jimmy Stewart. Hitchcock wanted to play up the homosexual overtones, and imply that the Cary Grant character had introduced the Clift character to homosexuality. Laurents said that Clift was gay and Grant was “at best bisexual”, and so turned the roles down, as they didn’t want to stir up rooms. Of course that subplot was lost when Jimmy “ah shucks” Stewart got the role.

Also, Cary Grant was a major acid-head.  He dropped LSD more than 100 times, prescribed by his shrink.  He started just after filming North by Northwest.

Supposedly, the scene in To Catch a Thief where Grant and Grace Kelly stop for a picnic is set just a stones throw from where the princess later died.

Here is his birth certificate.