I have a face like the behind of an elephant.
They can’t censor the gleam in my eye.
Show More Quotes
Show less

My buddy Steve Goldstein and I went out to do a little sightseeing a while back. One of the places I’ve always wanted to visit was Charles Laughton and Elsa Lanchester’s house, right in Hollywood.

July 2003 – by suggestion of Findadeath.com friend Steve McClanahan, I rented a copy of Night of the Hunter, which Laughton directed.  Fascinating film.  It’s the one where Robert Mitchum plays a dodgy preacher with the words LOVE and HATE tattooed on his knuckles.  Visually, the film is fantastic.  I highly recommend it, especially for the one scene of Shelly Winters underwater, after she was murdered. 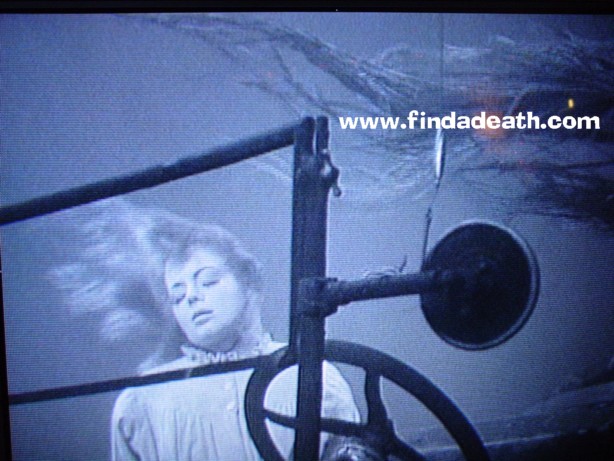 Right out of the Night Gallery.  VERY creepy.  Thanks Steve, for turning me on to it.  This movie is wild.

Helpful hints from Findadeath.com:  Printing up your Shelly photograph will make an excellent background addition to any home aquarium. 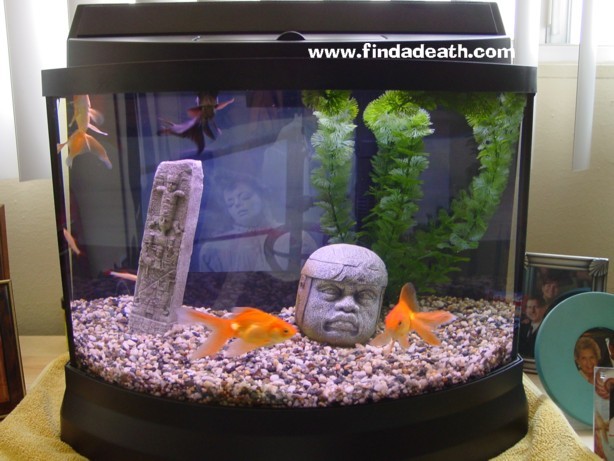 When I lived in London, I passed this house on Percy Street often. 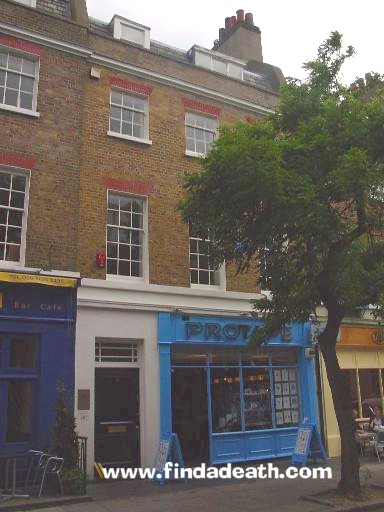 Laughton lived here, and legend has it, when his wife Elsa Lanchester caught him messing around with a rent boy in the house, she kicked him out along with the sofa they were busted on. Heh, I like her more and more. This is the blue plaque on the house. 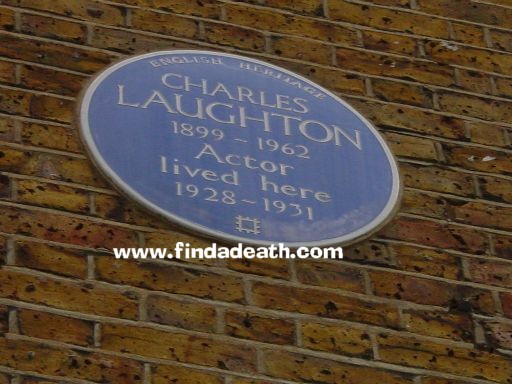 Loads of speculation about their relationship, he and Elsa. He was gay. From what I understand, she was not. I dug her, big time.  When they got together, the gay thing wasn’t known.  They got married, she found out, and she decided that it was cool with her. Willard, Murder by Death, and of course, The Bride of Frankenstein, and that GREAT Night Gallery with the green thumb. An icon for sure.

Laughton worked for Universal for a while, this is his Hunchback thing, 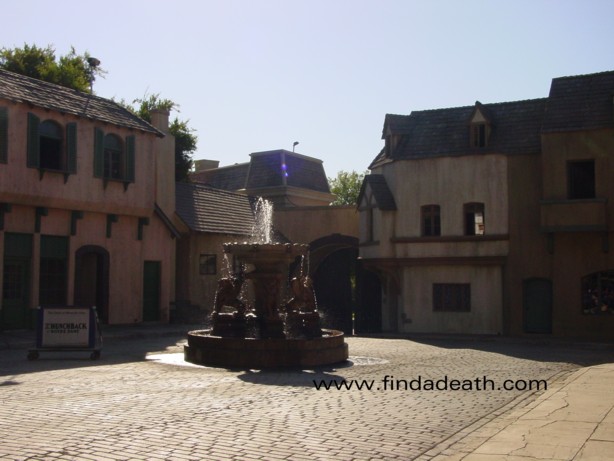 and here is his career.

He died on December 15th, 1962, with his wife at his side. They were living in this house in Hollywood, where they also ran an acting school. 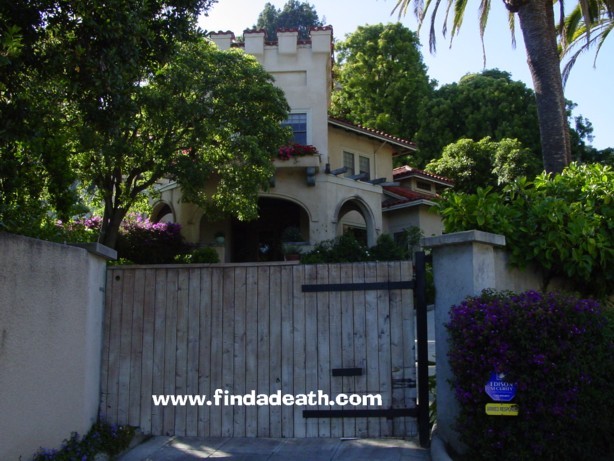 They had been living in California for 25 years. Nice house. Here is another view. 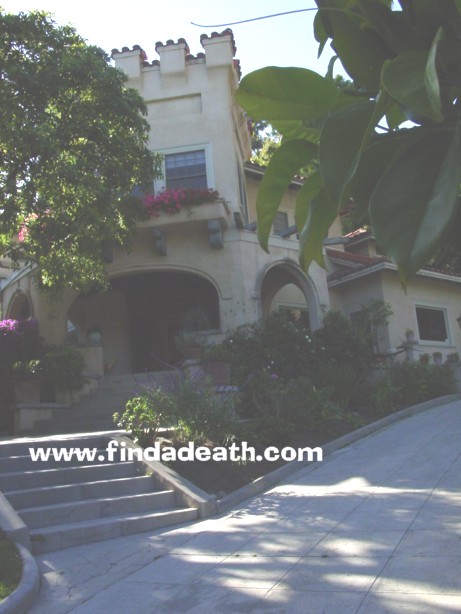 In 1962, he fell in the bathtub, and he entered a hospital in New York, with collapsed vertebrae. He was then diagnosed with cancer of the gall bladder. God, imagine getting THAT phone call. 11 months and considerable agony later, he died. I mean, it was agony. He wasted to 90 pounds, had to be shot up every hour with drugs to stop the pain. Awful. 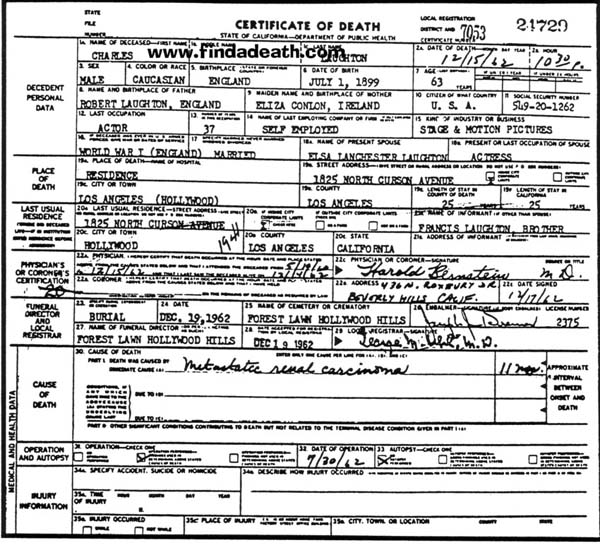 He is buried in Forest Lawn, Hollywood Hills.  Charles’ brother made the arrangements, for which they got a deal, because Forest Lawn was gagging for a celebrity occupant in the new wing.  I believe that totally.

At the funeral, “Death, where is thy sting?” was sung by a choir. 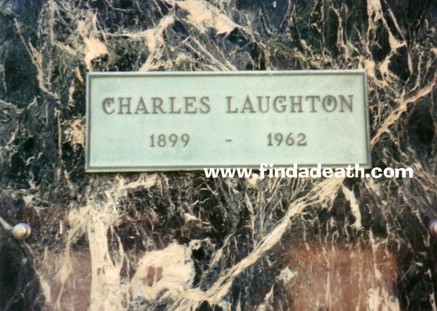 Trivia:  He was good friends with Burgess Meredith.

Info added by Findadeath.com friend E.J. Fleming:  Charles Laughton and Elsa were married in 1927.  According to her, they never had sex; she was the only woman he ever made love to during his lifetime.  Her preference for women was pretty well-known as well. But they were obviously very close; they stayed married for 30+ years. The incident you mention when she caught him with a young male prostitute occurred in 1930, and I believe that it happened at the Curson house, not in London, since they were living there then. The young man apparently did not like the financial arrangements that had been agreed upon. When Elsa walked in, he was obviously forced to confirm what she already knew. She said to him, “It’s perfectly all right. It doesn’t matter. I understand,” and walked out of the room.  Unfortunately, she had a psychosomatic reaction, and went deaf.  She couldn’t hear a thing for three months…  Cool, thanks EJ.

This just in, July 2003, from Findadeath friend Mark Sublette:

I remember seeing or reading somewhere that she was queried on whether she knew about his human nature when they married, and she had said something on the order of not being aware of it – but adding, “Remember, he was a GREAT actor!”

Thank you to Simon Callow and his great biography of Charles.