Well, la di fricken da.
In the land of the skunks, he who has half a nose is king.
I remember one time when all the nuns in my Catholic grade school got around in a semicircle, me and Mom in the middle, and they said, ‘Mrs. Farley, the children at school are laughing at Christopher, not with him.’ I thought, ‘Who cares? As long as they’re laughing.’
Once I thought that if I just had enough in the bank, if I had enough fame, that it would be all right. But I’m a human being like everyone else. I’m not exempt.
I don’t know what the future holds. All I know is, I’m good today. Real good.
You enter strong and you exit strong, and you’re going to be OK.
Although I love this kind of comedy, sometimes I feel trapped by always having to be the most outrageous guy in the room. In particular, I’m working on trying not to be that guy in my private life.
I want to live fast and die young.
I was glad to be sober, but after ninety days, people weren’t patting me on the back anymore, sayin’, ‘Good job on the sobriety! Go get ’em!’
There’s no control in life, is there? There’s only one who’s in control, and He’ll take me when He wants me. I don’t want to know about it. It’s none of my business. But when it happens, I just ask that it won’t be painful and that He forgives me my sins.
Show More Quotes
Show less

Christopher Crosby Farley was most famous for his stint on Saturday Night Live, and probably the Chippendales sketch is the finest example of this, although he did appear in films as well. In his personal life, he idolized John Belushi. He once said that he “dreamed of being John Belushi. That’s why I went the Second City (comedy troupe),Saturday Night Live route. I wanted to follow him.” In the end, he went pretty much the same way his idol did, 16 years previously. 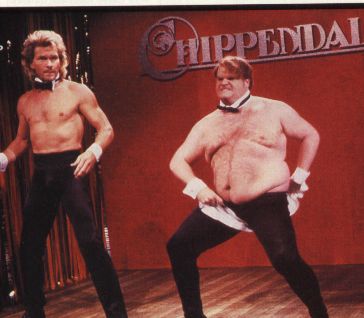 Chris once said, “I have a tendency toward the pleasures of the flesh. It’s a battle for me, as far as weight and things like that.”  He had been in rehab at least a dozen times, and was scheduled to go again when he died. 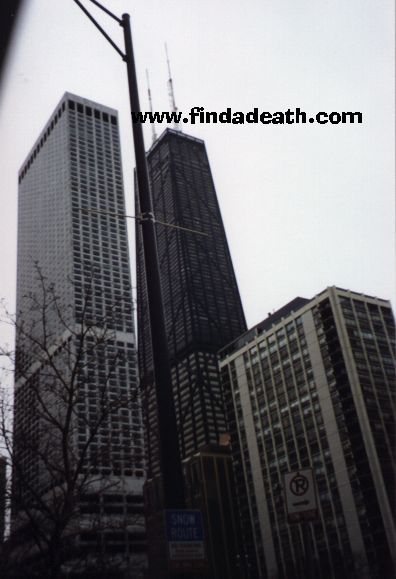 Chris had bought an apartment in the John Hancock Building, on Michigan Avenue in downtown Chicago. His apartment was on the 60th floor. Here’s the front door, and here are the very unfriendly guards in the lobby, which Farley surely passed through many a time. 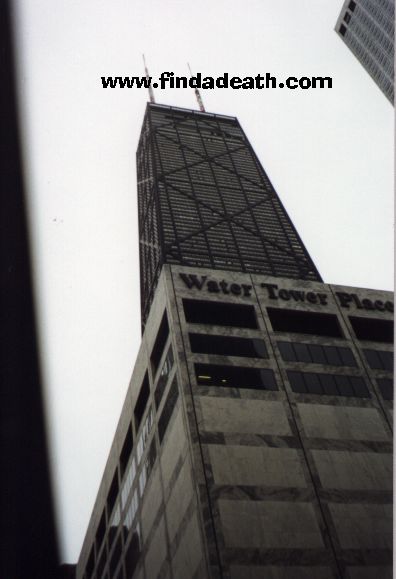 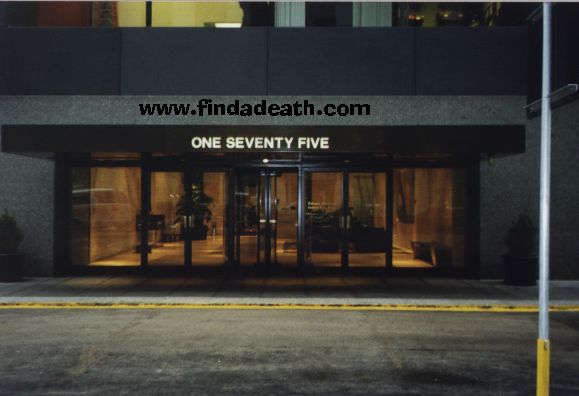 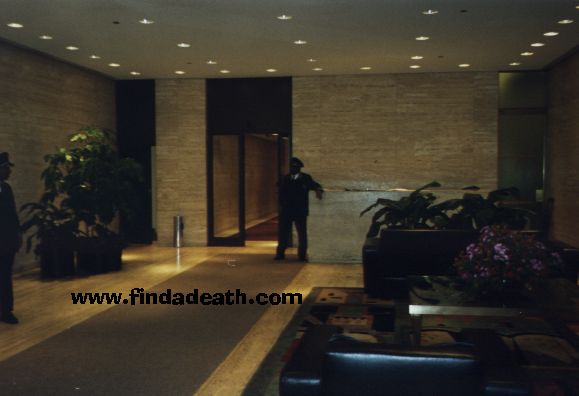 His last day was Wednesday, December 17th, 1997. He spent it primarily with a hooker called Heidi. Chris hired hookers regularly. Heidi was hired for Farley by a friend for $2,000. She joined Farley at a party in Lincoln Park (in Chicago) at 11 a.m. There were drugs going around. Later that day, Heidi took Farley back to her apartment – where they continued to smoke crack and snort heroin.

January 2008 Findadeath pal Pete Hertzberg sends this picture, which is most likely the door they used.  Chris claimed he’d been up for 4 days, without sleep. They tried to have sex, but Chris couldn’t. Cut to 11 p.m. – Chris and Heidi were back at his apartment in the Hancock building. She was getting pissed off because she wanted to get paid, and Chris claimed that the friend was supposed to pay her. They supposedly tried sex again, unsuccessfully, and finally at 3 a.m. she decided to take off. Farley was clearly inebriated, and as she was leaving his apartment, he collapsed about 10 feet from the door. Heidi claimed she could hear that he was having difficulty breathing. He said to her, “Don’t leave me.” Figuring he had finally passed out, she snapped a photograph of him lying there and then left. 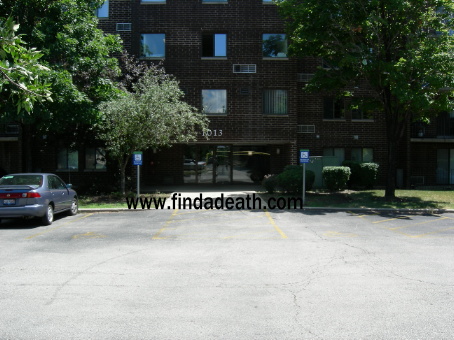 Chris Farley’s brother John found him the next afternoon. Chris was still lying 10 feet from the door, wearing sweat pants and an open button down shirt. He was supposedly clutching a baseball cap and rosary beads. There was a blood-tinged fluid coming from his nose, and a white, frothy fluid coming from his mouth. John called 911. Chicago Fire Fighters received the call just after 2 p.m., and Farley was pronounced dead at the scene. He was 33 years old. So was Belushi. So was Jesus Christ. 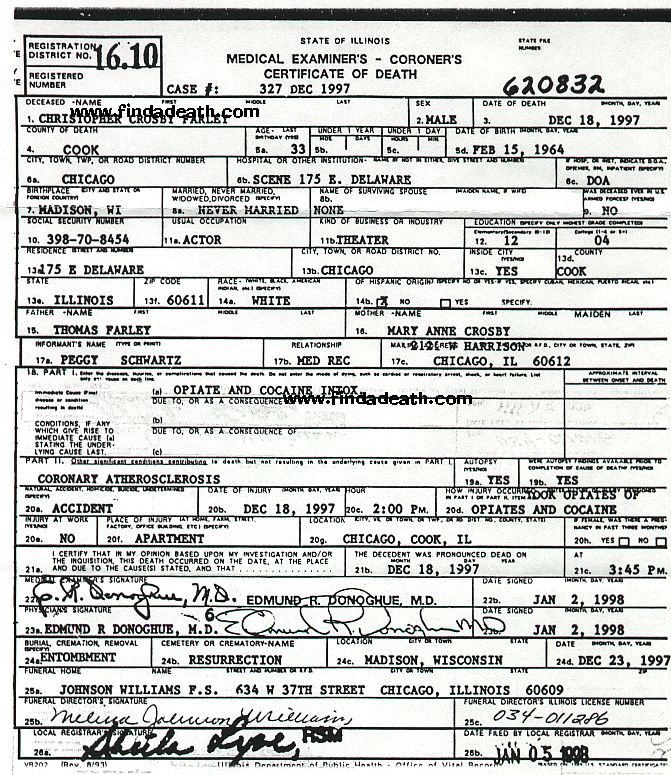 One version says that a search of his apartment turned up no illegal drugs, but plenty of prescription drugs. Another version is that it was littered with booze bottles and bags of white powder. Chris’s body was taken to the medical examiners, was given an autopsy, and samples were sent for toxicology testing. When the results came back, his death was ruled as accidental. “Chris Farley died of opiate (morphine) and cocaine intoxication and his death was determined to be accident.” Other things in his system that did not contribute to his death include Prozac, morphine, marijuana and the antihistamine fluoxetine. (Findadeath.com friend Kathleen sent this update in “Fluoxetine is not an antihistamine, it’s the generic name for Prozac. Whoever provided the info might have meant to put fexofenadine, the generic name for the antihistamine Allegra.
It was just a minor point, but I used to work in a pharmacy, so I have all these names branded into my brain now.” – Thanks Kathleen! )  His weight (296 pounds) created a narrowing of three coronary arteries, which was a contributing factor in his death. He also had an enlarged heart and his liver also showed fatty changes consistent with heavy drinking.

Heroin is metabolized into morphine in the blood stream and is the “opiate” found upon autopsy when someone dies of a “speedball”; classically heroin and Cocaine, (sometimes Heroin and Methamphetamine). Given the world of street-corner pharmacists, I can assume by the stated findings that heroin, not morphine, was the fatal ingredient. (Heroin is a Hell of a lot easier to get on the streets of New York than pharmaceutical Morphine, it adds up). It looks like Chris Farley followed his idol, John Belushi’s, example to the end. Not only in his career, but in death, including, age, drugs, and manner of death. Sad. Very sad.

Speedballs are now more common than straight Heroin overdoses in EMS. We paramedics administer “Narcan” to reverse the effects of a Heroin OD and sometimes find ourselves fighting with people who have been brought from under the opium overdose and coma, to tweaked, psychotic battles with the remaining rage of the speedy drugs that were ingested with them. There is another syndrome with Heroin, not necessarily in overdose enough to cause respiratory depression as in most Heroin deaths, but a reaction to Heroin that causes an altered cellular wall permeability in the alveoli (Lung sacks) that allows fluids, plasma, blood cells, to flood into the lungs and drown the user with astonishing speed, and no medical treatment can prevent rapid death. The result is a pink, blood tinged, frothy sputum from the mouth and nose (blood and plasmids) with rapid death to which no medical treatment can mitigate.

In any case, Chris wanted to follow John, his hero, in life. He did so to the end. No doubt. 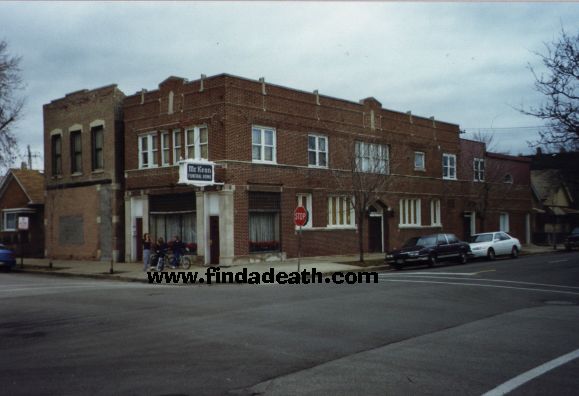 At 3 p.m. on Friday, his body was then taken to the McKeon Funeral Home, 634 W. 37th Street, on the south side of Chicago. No doubt his casket passed through these doors. On the 20th, he was taken to the Johnson Williams Funeral Service in Madison, Wisconsin, where a private funeral was held on Tuesday. 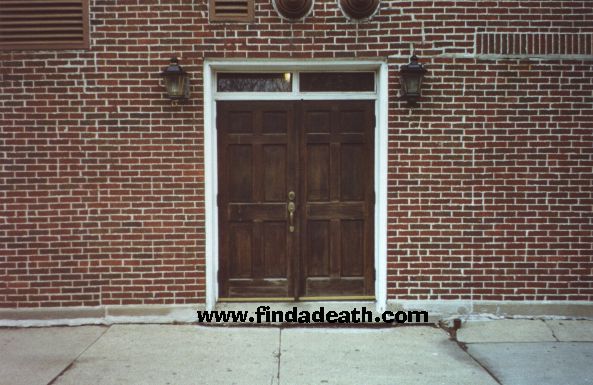 On Tuesday the 23rd of December, there was a funeral mass held at Our Lady Queen of Peace Roman Catholic Church (thanks Beca), in Madison. Over 500 attendees included Lorne Michaels, Dan Aykroyd (who wore a leather jacket over his suit, same as he did at Belushi’s funeral), John Goodman, Tom Arnold, Chris Rock, Adam Sandler, George Wendt and Rob Schneider. The funeral program contained the serenity prayer, from AA, and the Clown’s prayer (What – that they go away?). 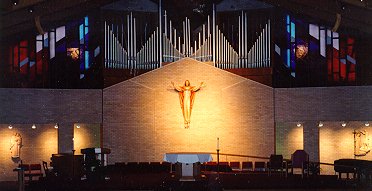 Memorials were planned for Chicago, New York and LA.

He is buried in Resurrection Cemetery, in Madison.

More: You might remember the John Hancock building from the film Poltergeist 3, as it was completely based in the building.

This just in from Findadeath.com friend Ang:

I was reading your story about Chris Farley and just remembered something. I watched the MTV TV movie, it’s called 2gether (they are also a “spoof” band that actually do sing–they are performing at a local concert this Tuesday). Anyway, one of the cast member’s last name is Kevin Farley. You can tell he must be related to Chris. He has the same build and looks. I don’t know if you care or not, but here is the best pic I could find of him.  In case you couldn’t see, the guy in the middle is Kevin. By the way, he’s 35. Isn’t it creepy how much he looks like Chris? Just thought you’d like to know 🙂 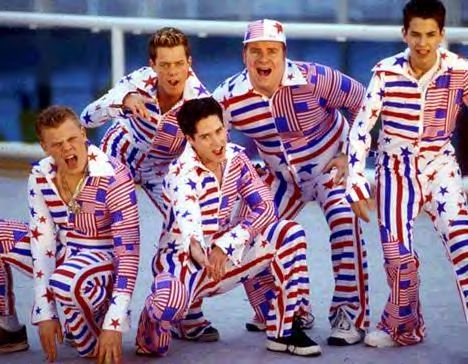 Thanks for the great info Ang.  Much appreciated!  – S

Findadeath.com friend DAVE confirms that it is indeed Chris’s brother.

Oh yeah, the hooker Heidi? From what I hear, she sold the photo to the GLOBE. Anyone have it?

UPDATE FEBRUARY 2001:  Oh my God.  The pictures are here.  I have to warn you, they are some of the most disturbing, gruesome photographs I have ever seen.  I forewarn you, DO NOT go here if you are easily bothered by dead stuff.  I AM DEAD SERIOUS.

A TON of people have sent me these photographs – the first being a person who just wants to be known as “The Shadow.”  I thank you all for keeping me in the loop.  Gross as they are, those pictures are fascinating.

To the bunch of you wondering what that stuff is coming out of Farley’s mouth, Jamie the Mortician (see links) explains:

“The shit coming out of his mouth is called purging, which was either caused by the O.D. or the heart attack.  It’s when the body builds up pressure, and the stomach fluids need OUT.”

Thanks Jamie, as usual.

Billboard on Sunset April 2005 – Apparently it wasn’t all his fault. 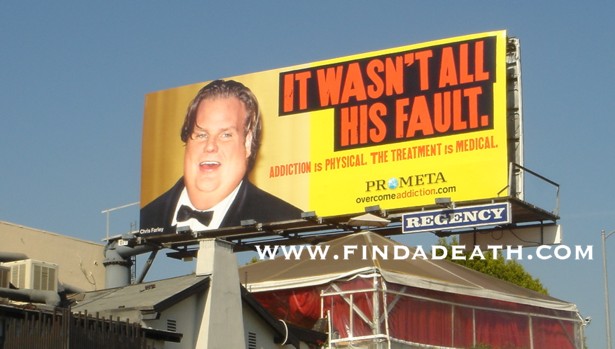 Findadeath.com friend Josh Perry righted what Rite Aid wronged. He took photos of these locations, and they came out! Thank you so much, Josh.  Kudos also go out to Todd Brittain, who helped gather the text info.

What the hell happened to that whore? 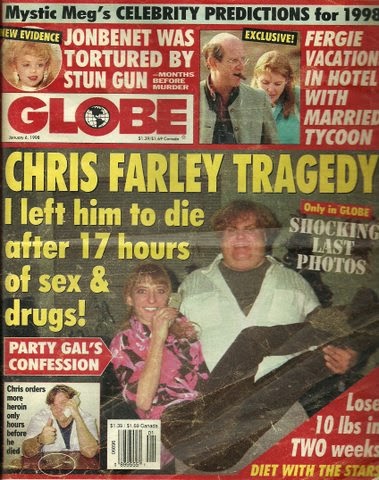