Excuse me while I whip this out.

Probably most well known for his role in Blazing Saddles, there is embarrassingly little information on Cleavon the person. I have three obituaries, and all three of them act really as a resume for him, saying nothing about his personal life. One thing for sure, he was good about staying private.

I can say that he was divorced, and had a daughter named Adia Millett-Little. His father Malchi and two sisters and two brothers outlived him.

Career wise, he was in that movie Once Bitten, which starred Jim Carrey before he was Jim Carrey, and played a preacher in the original Waltons movie, TheHomecoming. Wouldn’t be Christmas without Livvie’s applesauce cake. Cleavon did his fair share of playing stereotypes -he played a burglar in an episode of All in the Family, but he was funny. And good looking.

He succumbed to colon cancer on October 22, 1992, in his home in Sherman Oaks, California. 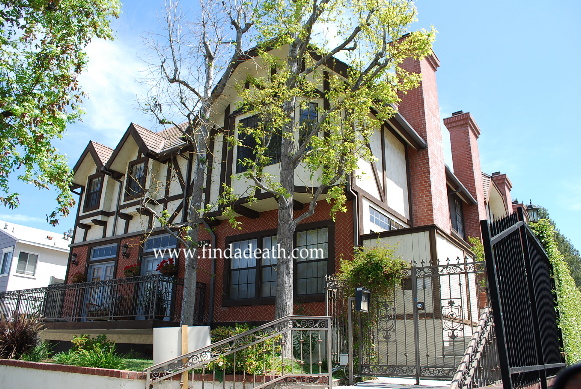 He was fifty-three years old.

He was cremated on the 28th, and scattered in New York Harbor, NY.

Trivia: He won a Tony award, for his performance in Purlie.

More Trivia: In 1979, he did a pilot for a show called Mr. Dugan, about a fictitious politician, but the show was canceled before it was shown, due to pressure from black politicians outside of TV land.

Last Trivia: He was left-handed.

Interesting bit:  I’ve read that Cleavon Little was chosen by studio heads to play the lead in Blazing Saddles, over Richard Pryor. Pryor had co-written the script, and was supposed to play the role himself. This was the early Seventies, Pryor was still very controversial, and the guys in the suits were scared shitless of him. Also, Cleavon was in a sitcom called Temperatures Rising. It ran for 46 episodes, between 1972-74. It was revamped at least once, but still bombed. It costarred Paul Lynde, and Joan (eww) Van Ark. For some strange reason I have always remembered it. And one more, I love this one: Bob Costas had a really good late night talk show for a few years some time ago. It was called LATER WITH BOB COSTAS. Costas was a huge Mel Brooks fan, so he did a full week with him as the only guest. He asked Mel about a scene in Blazing Saddles, that had been cut due to Mrs. Brooks (Anne Bancroft) request. She claimed it was in poor taste even by Mel’s standards, and for whatever reason, Mel agreed. Here it is, as described by Mel himself: When Madeline Kahn’s character (Lily Von Shtoop) gets the sheriff (Cleavon Little), alone in her room, she says in her thick German accent, “Now we see if it’s true what they say about black men.” She blows out the light and we hear the zipper go zip. NOW, the cut scene: From the darkness she declares with glee, “It’s true! It’s true!” Cleavon replies, “Stop sucking on my arm.” Costas was speechless for a moment, then collapsed from his seat onto the floor. I was sitting on the couch in the dark squirting Pepsi-Cola out my nostrils.

And Findadeath.com friend Kevin Hassell comes up with this:  In his autobiography, Pryor Convictions, Richard Pryor said that he helped write Blazing Saddles. In fact, one scene that he mentioned having helped to come up with was the infamous campfire farting scene.

He also said that he was supposed to play the part of the black sheriff. However, the studio that was backing the movie did not want him in the role because of his drug use.
Reportedly, Mel Brooks was told to find a replacement, or the movie would be shelved.  Thus, the part went to Cleavon Little.

This just in, March 2003, from Findadeath friend Paul McGee:

Hello once more. Cleavon Little starred as the soulful blind disc jockey in Vanishing Point. You know, “The maximum trip at maximum speed” about a car chase, amphetamines, transcendence. Thanks. Paul

Thanks for the info, Paul!

I loved this guy here are just a few tidbits.  A memorial service is scheduled Monday at 1 p.m. at the First Apostolic Church of Inglewood. It was attended by long time buddy Judd Hirsch.
His “stomach aliment” was ulcerated colitis which bothered him only on occasion, and he has a star on the Walk of Fame at 7080 Hollywood Boulevard.
Findadeath pal Mojo D sends:

Cleavon Little was a Staff Sergeant in the U.S. Air Force Reserve in the 70’s.  He was penalized for not showing up for required monthly meetings and was placed on active duty with the 916th Air Refueling Squadron, Tactical Communications Division,  at Travis AFB, CA. in 1972.  Was married to a British wife and they had a daughter.  Separated and ultimately divorced.  He was a good buddy.  Sorry he had to leave so soon in life.

John McCormick sends: Cleavon Little starred as the soulful blind disc jockey in Vanishing Point. You know, “The maximum trip at maximum speed” about a car chase, amphetamines, transcendence. The above mentioned scene with Cleavon Little as the DJ was in one of the first Audio Slave Videos (Chris Cornell of Soundgarden).