Jeron Charles Criswell King also known as “Criswell Predicts!” dubbed himself the “20th Century Nostradamus” and was also called “America’s Foremost Prophet.” Based on “trend, precedent, pattern of habit, human behavior and the unalterable law of cycle!” he claimed 87% accuracy in his predictions.

Today, Criswell is known mainly for his opening monologue, narration and closing comments in Ed Wood’s Plan 9 From Outer Space (1956), but his career went well beyond that and it could be said that his persona is a product of mass media.

He hosted his Criswell Predicts! show on local Los Angeles television, penned a syndicated column that was in over 300 newspapers nationwide, hosted a radio program on over 85 stations, made numerous guest appearances on network talk shows such as Jack Parr and Johnny Carson’s Tonight Show and the Mike Douglas and Merv Griffin shows, authored three books of predictions, released a record album of predictions and appeared in two other Ed Wood films as well.

Jeffrey Jones portrayed Criswell quite convincingly in the very successful Tim Burton film Ed Wood (1994) and exposed a new generation to the “prophet from Indiana” and some of his exploits.

Criswell could be called the first celebrity psychic, his ever present black tuxedo with sequined lapels symbolized the razzle-dazzle Hollywood showmanship that drew his loyal following throughout the mid to late 1950’s. His place among the assorted cast of characters that were Ed Wood’s friends, his lifelong friendship with Mae West, his unusual home life, and his volumes of predictions (most extremely bizarre and inaccurate) further solidified his place amongst Hollywood’s mysterious and macabre. 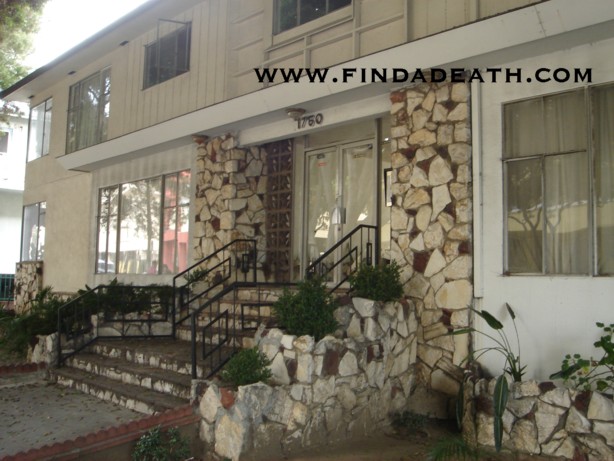 which is in central Hollywood, just steps from where Joplin and Fuller bit it.  I predict that Criswell had to do his own laundry, much like this chap 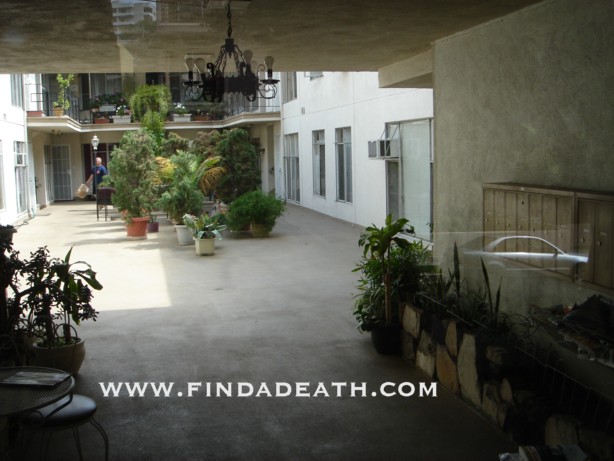 in the courtyard now.

Among his close circle of friends, he openly denied any psychic abilities and freely admitted himself to be a fraud. That sentiment, however, was not shared among many of his friends and associates, many of which believe to this day that Criswell did possess psychic talents.

On August 30, 1982, Criswell was admitted to St. Joseph’s Medical center in Burbank for the treatment of several illnesses. 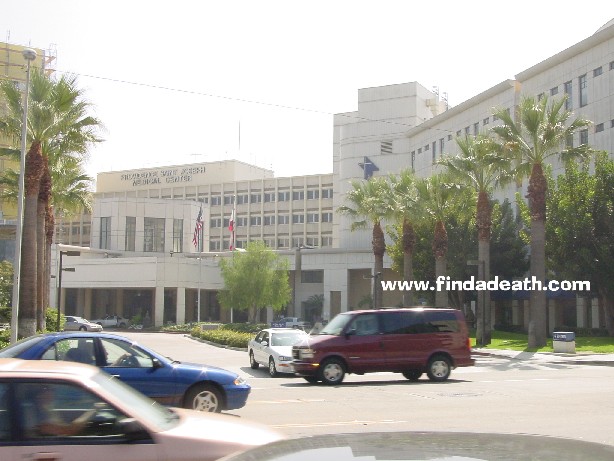 He had suffered a number of strokes over the previous year. In the early morning of October 4th, he suffered a cardiac arrest and passed away at the hospital. 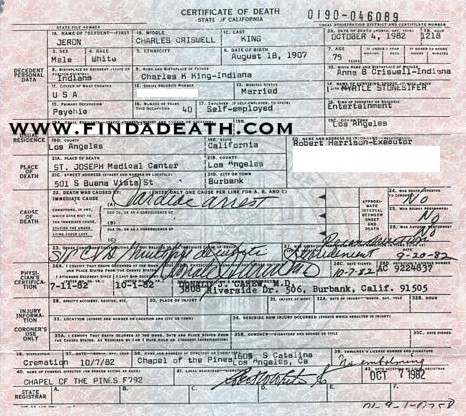 He was cremated October 7th, and interred at Pierce Brothers Valhalla Memorial Park, North Hollywood, in the Niches of Remembrance, F-10, Space 2.

His occupation is listed as Psychic for 40 years. Kind of industry or business is of course listed as Entertainment. He had no known survivors besides his estranged wife, Halo Meadows.  Cool name.

Obituaries appeared in Variety, Los Angeles Times, Los Angeles Herald-Examiner and The Gettysburg Times. Some were inaccurate and contained erroneous information. One stated that he died in his Hollywood home, while others listed his first name as Jerome or Jared. Some said he had only been in the hospital for about a week. Some said he died of a stroke but his death certificate states, “cardiac arrest.” One would say he began predicting as a child while another would say he started prognosticating during his radio news casting days. Even in death, the “facts” about Criswell did not jive.

The Life and Prophecies of the Amazing Criswell. When the book is out, Findadeath with happily announce it.  Thank you Ed.

August 18th 2007 marked Criswell’s 100th birthday and a group of people gathered in Hollywood to commemorate the legend, ending the evening with a candlelight procession to an apartment building well known to be associated with him.  I stupidly did not bring a proper camera, but did take this video from my phone, which came out kind of cool. 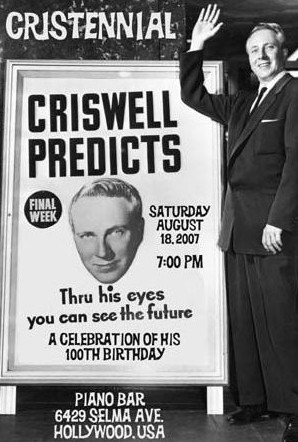 Oh, just realized that Criswell and I shared the same birthday.  I like that.  Others include Shelley Winters and Roman Polanski.  : )