My daddy used to say that I was too big to ride and too little to hitch a wagon – no good for a damn thing.

Hoss was part of the cast of the TV show Bonanza. He played the “big lug with a heart of gold” character. Again, you know the type. He was always being taken advantage of, or doing something really stupid, then giving a dumb smile, and everyone was supposed to go, “awww.” I never “got” westerns really. I always thought they were too dusty.

So anyway, Dan Blocker played the character Hoss, from 1959 to 1972. Remember that map that used to burn at the beginning?  Thanks Jody!  Findadeath.com friend Curtis in Sacramento sends us this:  While reading the Dan Blocker page, I noticed something I’d forgotten about. Not sure if you are aware of this, but the map that was at the beginning of the show Bonanza is VERY far off geographically. Reno is actually to the north east of Lake Tahoe by 40 miles and Carson City is about 15 miles due east of the lake.

September 2002 from Findadeath.com ejdmb: It actually is accurate.  Look at where North is pointing in the upper left hand corner.  Then turn it upright & compare it to a regular map of the Reno/Lake Tahoe/Carson City area.  It’s pretty much right on.

Maybe that’s why people always got lost on that show?  Thanks Curtis!

Very good Findadeath.com friend Jim sends us this:  I don’t know if you can use this or not. One of Hoss’s first roles in Hollywood was with the Three Stooges. It’s one of the later Stooges shorts with Joe Besser. (Joe was married…to a woman. I know, I know, I can’t believe it either.) It’s called Outer Space Jitters. It was made in late 1957. Hoss, all done up with (get this) a pig nose prosthesis, is billed as The Goon. He chases Moe and Larry all over the place. (Joe had a clause in his contract–no rough stuff!) If you watch and do a freeze-frame on The Goon, it’s definitely Hoss, maybe a year and a half before Bonanza.

Hoss and The Stooges. Does life get any better?  Cool stuff, Jim.  Thanks!

He was a Sunday night fixture for many years, and during the show’s hiatus in 1972, Mr. Blocker got ill. He lived in the Hancock Park area of Los Angeles, 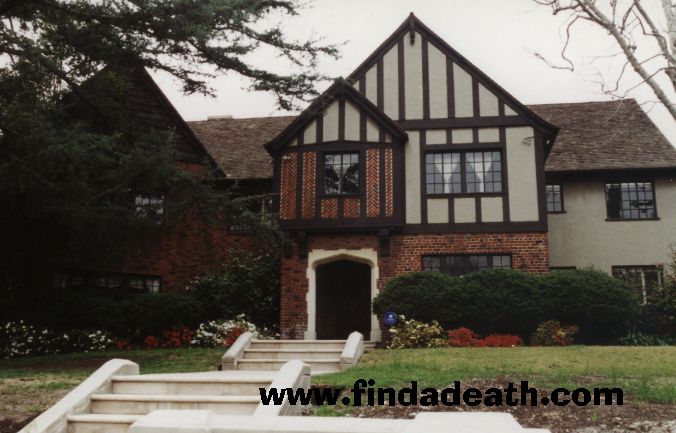 very close to where Nat King Cole lived. He was born in Texas, but had lived in LA for 17 years. By this time, he had four children, twins Debra Lee & Danna Lynn, and sons David and Dirk. I used to see a lot of Dirk in the movies and television a few years back, but that was a few years back. 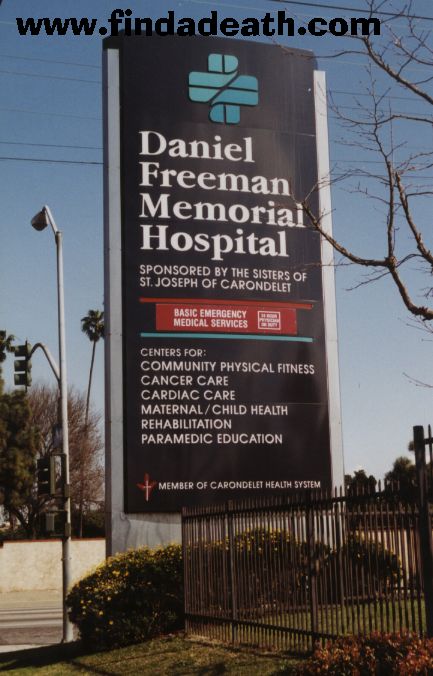 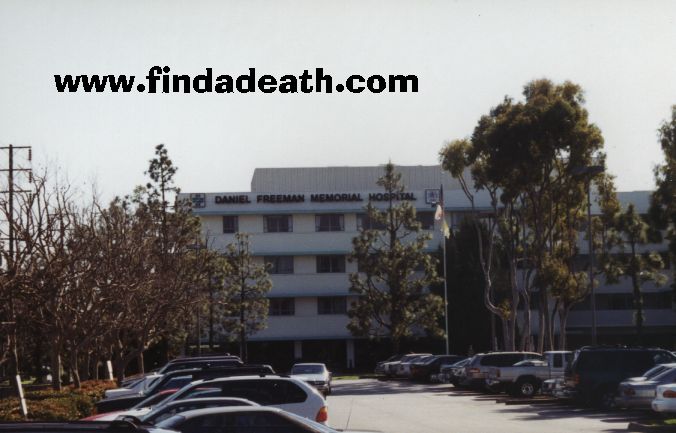 Very close to Ella Fitzgerald’s diabetic foot clinic.  According to what I can gather, the surgery went okay, but he developed a blood clot in his lung, and 14 days later, on the 13th of May, he died. He was only 43 years old. 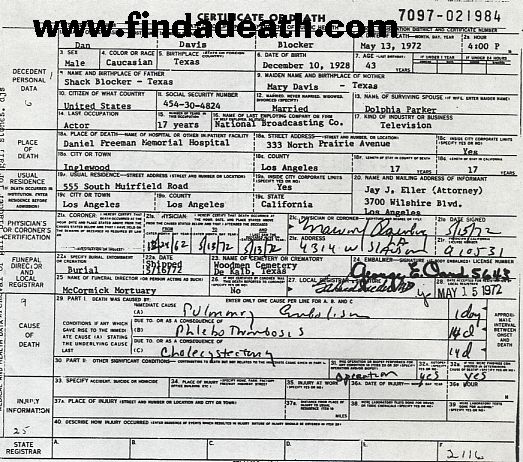 Two days later, ol’ Hoss was shipped back to his native Texas, where they do everything big. He is now buried in Woodmen Cemetery in De Kalb, Texas.

Findadeath.com friend Patty Webster sends us this:  Liked your Dan Blocker page. I was around when he went to the mortuary, where I worked. It took eight men to put him in his solid oak casket.  He also wanted his boots on, and they had trouble getting them on.  They did get them on, but rumor has it it also took three men.

The average amount of death certificates are 3-4 per person.  His lawyer ordered 100. 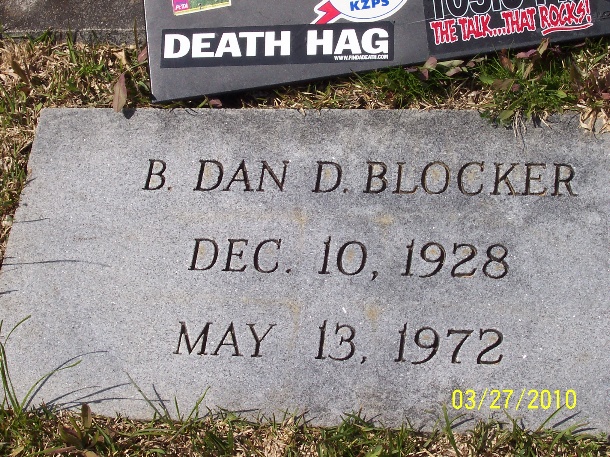 Since his death was so sudden, it really threw the Bonanza people off, that on top of the fact that they moved the show from its regular Sunday night slot, and put it up against Maude on Tuesdays. Don’t mess with Bea. The show was cancelled half way through the next season.

Seems old Hoss was a reaaaaaaaaaaal tightwad. Close with a buck, a cheapskate etc. Worse than Rudy Vallee and Fred MacMurray (two other legendary freeloaders).

Hoss got involved with road racing in the late 1960s and owned a car called “The Vinegeroon.” It was built and maintained by Nickey Chevrolet in Chicago. Dan and Nickey owner Jack Stephani were friends. Hoss would come to town (always at Jack’s expense) for personal appearances at the dealership. He’d wear the Hoss hat and Hoss vest from Bonanza and shake hands and kiss babies, etc. Nice guy, but incredibly cheap. How cheap? While in town he never stayed in a hotel. Ever. Jack Stephani had a sofa bed in his office at Nickey Chevrolet, and Hoss would sack on the property. Stephani’s flunkies would lock the gates at closing time, and turn the guard dogs loose with Hoss inside. He’d watch TV by himself, and drift off to sleep in the middle of a used car lot at Irving Park Road and the Kennedy Expressway.

Hoss never rented a car. One of Stephani’s car hikers would pick him up at the airport and drive him around in a demo Chevy, usually an Impala. Hoss never paid for meals. Jack would pick up the tabs. Or when Hoss got hungry and wandered out around the neighborhood in search of a snack, he’d take a stack of 8″ by 10″ glossies with and go to different hash houses and greasy spoons where he’d naturally be recognized as a Cartwright. The owners wouldn’t let him pay for the $20 worth of vile crap he’d wolfed down. Hoss, always protesting, would then peel off a glossy and autograph it to Sam, Gus, Pete, Alex or Joe with a great flourish.

Then he’d saddle on back to Nickey Chevrolet, put on his nightshirt and nightcap and haul out the sofa bed and take a snooze.

I heard all of this from a guy who worked at Nickey Chevrolet. There you go!

Dan was a very nice man and quite generous, which is contrary to what you have in his section. Dan spent a great deal of time doing charity work for children. I know this, as I was a recipient of his generosity. Therefore, I do take it seriously and find it quite offensive when I read about such a good man being painted in such a negative light. Dan wasn’t royalty, but rather a common man with uncommonly good luck. He knew this too.

Why don’t you do a little legwork and try to find out about the good that he did in his life? Dan was not the sort of cheapskate that your website has made him out to be.

He was wealthy. He was also a very funny man. Read any biography on Michael Landon and you will find passages about Dan that illustrate his humor. Look for film footage of Dan in various interviews and you will see this side of him. He was a talented writer as well, as Playboy printed some of his work. He was educated at Sul Ross University in Texas and was a schoolteacher prior to his acting career.

Those are just a few things that you might not have known about Dan Blocker. On a personal note, I take great pride in being in a grocery store or at a football game and having people come up to me and say “You look just like Hoss Cartwright” or “Are you Dan Blocker’s son?”. Countless times that has happened and if I were his son, I would take great pride in it. As it is, I feel proud even being asked those sort of questions.

In closing, I will guarantee you that for every distorted “cheapskate” story that you have been told about Dan, there are at least two stories about his kindness and generosity. I challenge you to find those and post them on your website.

April 2002, info added: I heard a story about Dan Blocker from my father, don’t know if it’s true or not. While filming episodes of Bonanza, Hoss would repeatedly forget to take his Rolex wrist watch off before going to the set, and at first they’d be halfway through a scene before someone would notice. At first the director would kindly point out to Hoss his error, but it happened so often that the director became impatient with him and would really give him hell. Hoss finally seemed to get the point and days went by without him once wearing his watch during filming. One day, during a filming, someone noticed that Hoss had his watch on again. The director yelled, “God dammit, Dan, your watch!” Hoss yelled, “It won’t happen again!” Pulled his watch off, threw it on the ground and stomped it into pieces. Of course, the rest of the cast stood with their mouths hanging open because Hoss’s watch was a Rolex. Hoss, seeing their reactions, burst into laughter, which only confused the cast further. It turned out that Hoss had planned the whole thing and had bought a ten dollar knockoff for the occasion.
Like I said, don’t know if it’s true. Dad told me he had heard Dan talk about it on the Johnny Carson show years ago. I thought it was a good story – John Ratcliffe

From Findadeath.com friend Maury Hudson:  Dan Blocker is buried in The Woodman Cemetery in DeKalb, TX and is not called DeKalb Cemetery.  It is located on Hwy 82 or Front St.

There is a museum located in O’Donnell, Texas, USA, dedicated to Mr. Blocker. At 14 pounds – he was the largest baby ever born in Bowie County.  He was a part owner in the Bonanza Restaurant Chain.

Findadeath.com friend Scott G sends us this:  I was recently watching an episode of MTV “Cribs”. I noticed that Rob Zombie was living in Dan Blocker’s old house You should see how he has modified the house to his particular tastes. He is a big Munsters fan, and now the house has Munsters memorabilia all throughout.

This just in, July 2003, from Findadeath friend B. Carson Turell:

I have a story about Dan Blocker that also illustrates that he was no cheapskate, and a terrific guy.  I was told this story while I was working on a show at Warner Bros:

When Bonanza moved onto the Warner Lot, their stage was very near the building called the Mill. Every day, he would walk into the Labor Department in the Mill to use their men’s room, comment on how hot it was, and ask if someone could toss him a cold soda on his way out.  This went on for months and months. It got so the guys in the labor department would get up to get him his drink before he even asked. One day he came in and saw a guy jump-to, so he said, “You don’t have to get me the soda, I’ll get it. Where’s the fridge?” The department didn’t have a fridge. Each day someone would ride a bike all the way to the commissary and get a cold bottle of soda. The next day, a large refrigerator with a huge red bow was delivered to the Labor Department. When they opened the fridge it was filled to the hilt with soda. Then Dan walked in, headed for the bathroom, commented on how hot it was outside, and asked if someone could toss him a cold soda on the way out. He was a class act.

Thanks for the info, Mr. B!