Daniel Joseph Lockin was an actor, singer and dancer who appeared on Broadway and most famously as Barnaby Tucker in the 1969 film, Hello, Dolly! with Barbra Streisand. Because of (and despite of) his savage murder in 1977 at age 34, he is almost completely forgotten.  Since so much of television now is about celebrity and death or true crime, it’s shocking that Lockin is still barely a footnote.

In private he left a life and talent extinguished much too soon, and left his family, friends and dance pupils shocked by the weak sentence given to his killer.

But we’ll always have reruns of The Gong Show.  More on that in a bit. 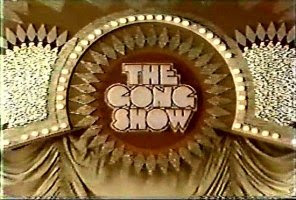 Born in Lanai, Hawaii, but raised in Omaha Nebraska, Danny was the only child of Joseph and Jean Lockin. His father Joe had met and married his mother Jean upon her return to the midwest after her post-high school stint as a Manhattan dancer in the last days of vaudeville. Joe accepted a job as operations manager at Dole Pineapple and the couple married and settled in Hawaii where their son Danny was born. After the War years, the family settled back in the States where Jean opened a successful dance studio in Omaha. Danny spent much of his childhood at the studio and danced so well that his mother wasted no time in creating a professional act for her son. Young Danny (white) and Neal Reynolds (black) were paired as “The Two Checkers” and performed their song & dance and pantomime act on the summer state fair circuit and in hotels of Omaha. Eventually 1950s racism and segregated venues put an end to the duo’s act – but Danny had the showbiz bug and was not stopping his pursuit of stardom.

In 1959, the Lockins moved to their new home in Anaheim California in Orange County (35 miles south of Hollywood) where Danny excelled in academics, theater arts and gymnastics at Rancho Alamitos High School in Garden Grove. After Joe died in Summer of ’61, Jean worked at her busy dance studio in Anaheim and Danny landed a few small parts on Dr. Kildare, Father of the Bride and My Three Sons, and did a Head & Shoulders TV commercial. He also unsuccessfully auditioned for the Hitler-youth role of Rolf in Fox’s The Sound of Music.

The 17-year-old Danny, with his 5’6” small frame, red hair & freckles, could (and usually did) play roles younger than his own age. After high school graduation, like his mother before him, he went to try his luck in New York City. In 1966, he got the role of Barnaby in the traveling production of Hello, Dolly! where he played opposite several Dolly’s including Betty Grable, Ginger Rogers, Dorothy Lamour and Eve Arden.

In 1967, it was announced that 25-year-old Barbra “left side only” Streisand would play 1890’s widowed matchmaker Dolly Levi in Hello, Dolly!  Broadway’s original acclaimed musical Dolly: Carol Channing recalled hearing this news, “ I was doing the stage musical at Expo ’67 at the time…and I had the feeling that I was Mark Twain and had just died and become an observer at my funeral.”

Danny Lockin was offered the role of Barnaby in the film version of Hello, Dolly!, after 13 tests (MASHED POTATO!  FASTER!  FASTER!) for MGM legend-turned-film-director, Gene Kelly. Danny was on top of the world and that year married chorus line dancer, Cathy Haas. The couple moved from NYC to L.A. for Danny’s 6-month rehearsal/shooting schedule and Cathy became pregnant during the 1968 film shoot which began April 15th 1968 on Stage 16 at Fox Studios on Pico Blvd.

Trivia: You can see a fountain from the film at Knott’s Berry Farm as this scenery piece was moved there shortly after shooting wrapped. 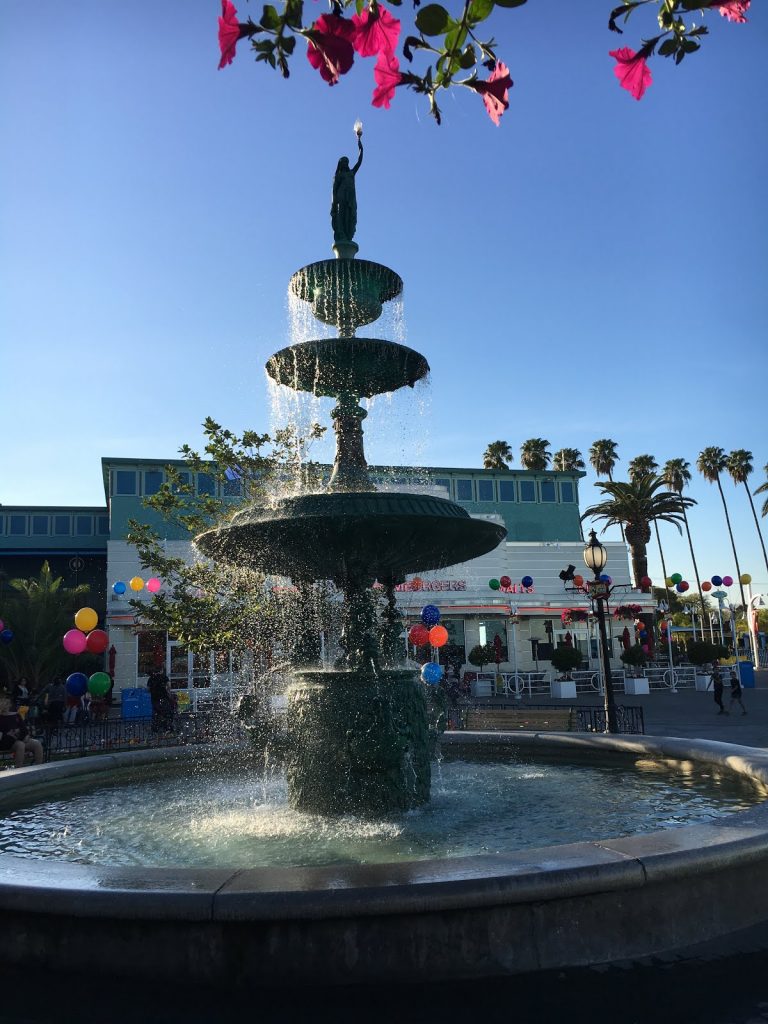 By the time Hello, Dolly! finally premiered in December 1969, some things had changed: Barbra’s film Funny Girl had made her a superstar and earned her an Oscar.  Danny Lockin’s marriage was over  – with his wife having left him that previous summer, filing for divorce, and taking their 6-month old son, Jeremy Daniel with her. Danny was reportedly devastated but had to keep smiling and performing on Broadway, where he was back playing Barnaby Tucker opposite the final stage Dollys : Phyllis Diller (wut) and Ethel Merman. In the Merman production, his stage partner ‘Minnie Day’ was played by future Mary Tyler Moore Show costar Georgia Engel. 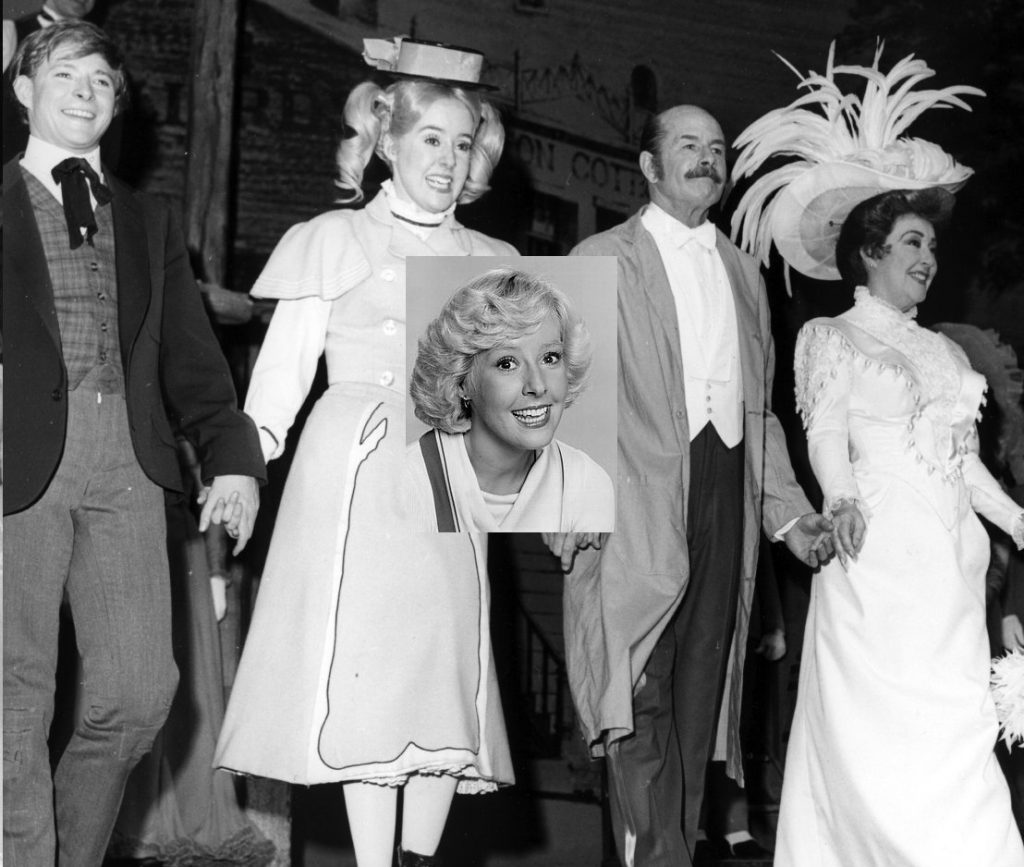 When the Broadway show closed, he once again took the role for roadshow productions into the early 1970s. With a monotonous touring life on the road and no other career prospects appearing, Danny began drinking more and doing cocaine. His drug use began affecting his showbiz reputation.

Danny was age 31 in 1974 when he moved back California and into his mother’s Anaheim home and began working as assistant manager and teacher at The Jean Lockin Dance Studio.

While Danny had been living his life in New York in 1960s, his alma mater’s city of Garden Grove CA had sprouted many gay bars, including The Happy Hour, Rumour Hazzit, the Mug, the Iron Spur, the Knotty Keg, the Saddle Club and DOK West. During these years, the gay bars in Garden Grove actually outnumbered West Hollywood’s. That wouldn’t last, and Orange County eventually settled back into its ongoing role as “conservative cousin” to progressive Los Angeles.

By 1977, his mother’s dance studio was closed and Danny was working at another O.C. studio. Danny was now an out “bisexual” and was no longer the twinkly-eyed twink dancer with a hot career. He had become a heavy drinker with DUI arrests and needed rides from friends and his mother.

Sunday August 21, 1977 began as an exciting and happy day for Danny Lockin. He and his gal-pal (and fellow dance instructor) Billie Jo Conway were booked to appear on TV’s The Gong Show. Their song and dance act was fun and visually quirky (as Billie Jo weighed 230 pounds.) but they were planning to pull out all their best tap moves. His mother Jean drove him up to Burbank for the taping, which was to be aired in primetime on September 14.

His mother told reporters, “It was a good night for him. He had the old light in his eyes.”  The pair performed well and owned the stage with their “There’ll Be Some Changes Made” song and dance routine. 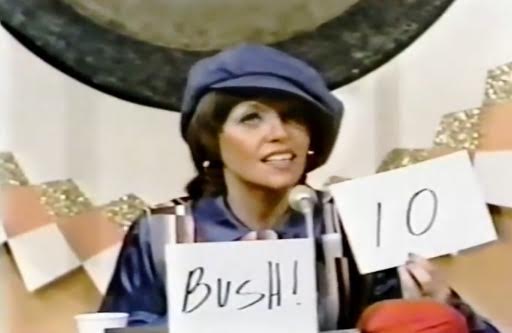 They were given 10s across the board from celeb judges, including one from that “rascule” Jaye P. Morgan who cattily joked that Billie Jo looked like current male singer Paul Williams. As they left the stage, host Chuck Barris thanked them for “doing their little stuff.”  Danny and Billie Jo tied with another act for first place and danced amongst the confetti.

Jean said that afterwards they celebrated with dinner and a martini, then her son asked her to drop him off at The Mug (gay bar) in Garden Grove so he could unwind and “play the pinball machine.” Danny was wearing his skin-tight dance pants (with no pockets to carry ID) when she dropped him at 11pm and he told her he had $5 for a taxi to get home.

That was the last she saw him alive. Jean later told the press that she’d heard he had called a taxi around midnight from The Mug but that “he didn’t take it. Someone had offered him a ride.  It doesn’t make much sense to me that he would leave with someone he didn’t know.”  Ah, the 70’s.

The Mug as it looks today 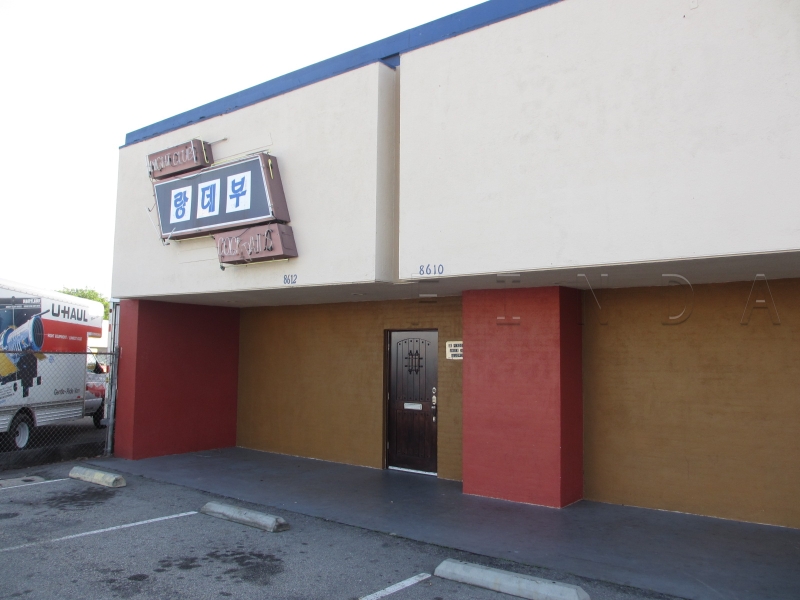 Of note:  Danny had earned the reputation of being quite difficult and was described as a live-wire and unruly when drinking.  Regulars at the bar said he was quick to take offense at everything.  He could be polite one minute and belligerent the next.  Tedious. 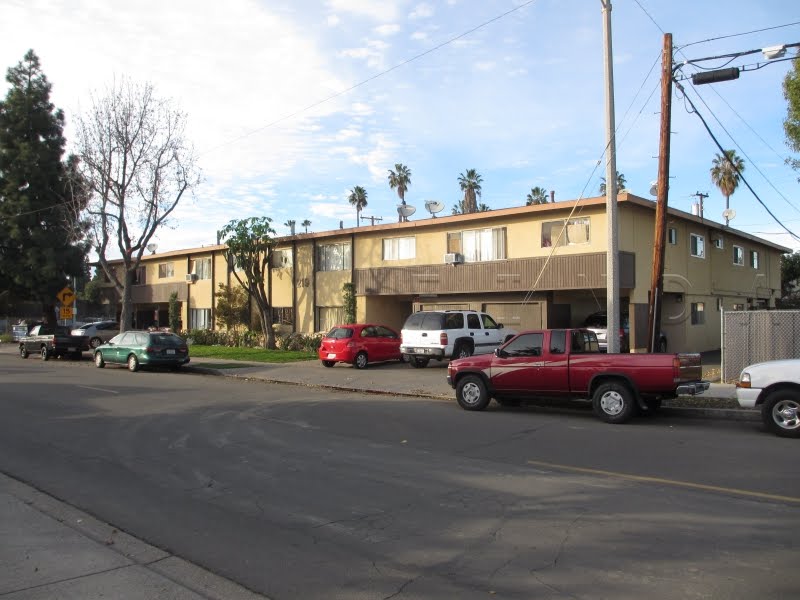 The apartment building was managed by “admitted homosexual” Dennis Reeves who would rent to “other gays.”  I love these quotes.  If you think this place looks great, the sun is playing tricks with you.  I couldn’t get out of there fast enough.  Troy still to this day threatens to throw my ashes here after I die.  Obviously the pool has been filled in. 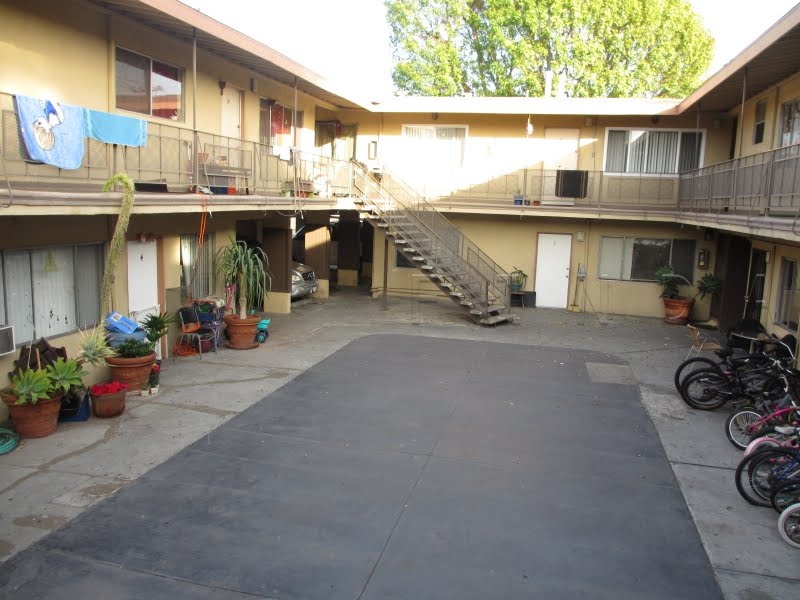 Newspapers surmised that if there was noise coming from his apartment #10 overlooking the pool.  There was no one in the immediate vicinity to hear it. Apartment #9 directly across from Hopkins’ door was vacant and tenants alongside his rooms in apartment #11 were gone. There was no one under Hopkins’ place as it was over a garage. 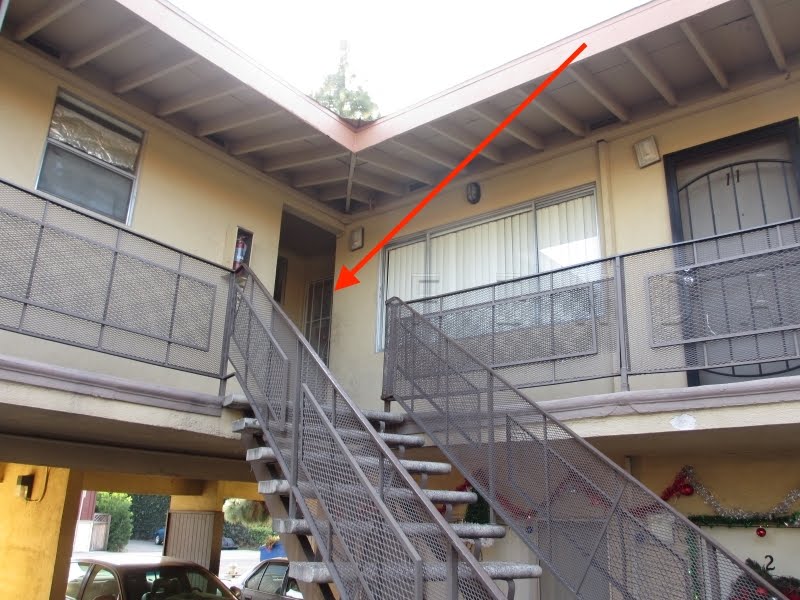 God, If I lived here, I would weep every time I had to ascend these stairs.

The street side windows of apartment #10 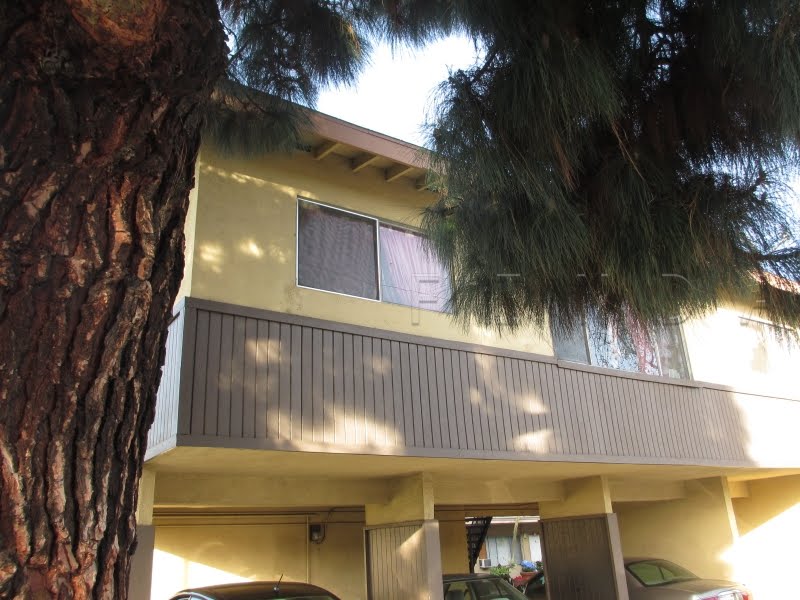 Chuck Hopkins called police several hours later and told police an intruder had tried to rob him. Danny Lockin was found stabbed to death.  But not just that.  He had been stabbed more than 100 times.  A majority of the wounds were 3 inches deep and 9 of the wounds were the potentially fatal one.  12 on the left side of his back, 2 postmortem, the right side of his back shows 16 stab wounds, 7 are postmortem.  12 to his right side, 5 postmortem, 17 wounds on his left buttock, all postmortem, 26 to the right buttock, all postmortem.  There are several more, some defense wounds…  you get the idea.

But back on that Monday evening, a night after she dropped him off, Danny’s mother was very worried and calling hospitals to find her son.  It took investigators two days to identify the body.  On Tuesday, August 23, Mrs. Lockin finally received the news from police after they’d identified her son using fingerprints on file from his drunk driving arrests.

The official cause of death:  Exsanguination.  Multiple stab wounds to heart & lungs. 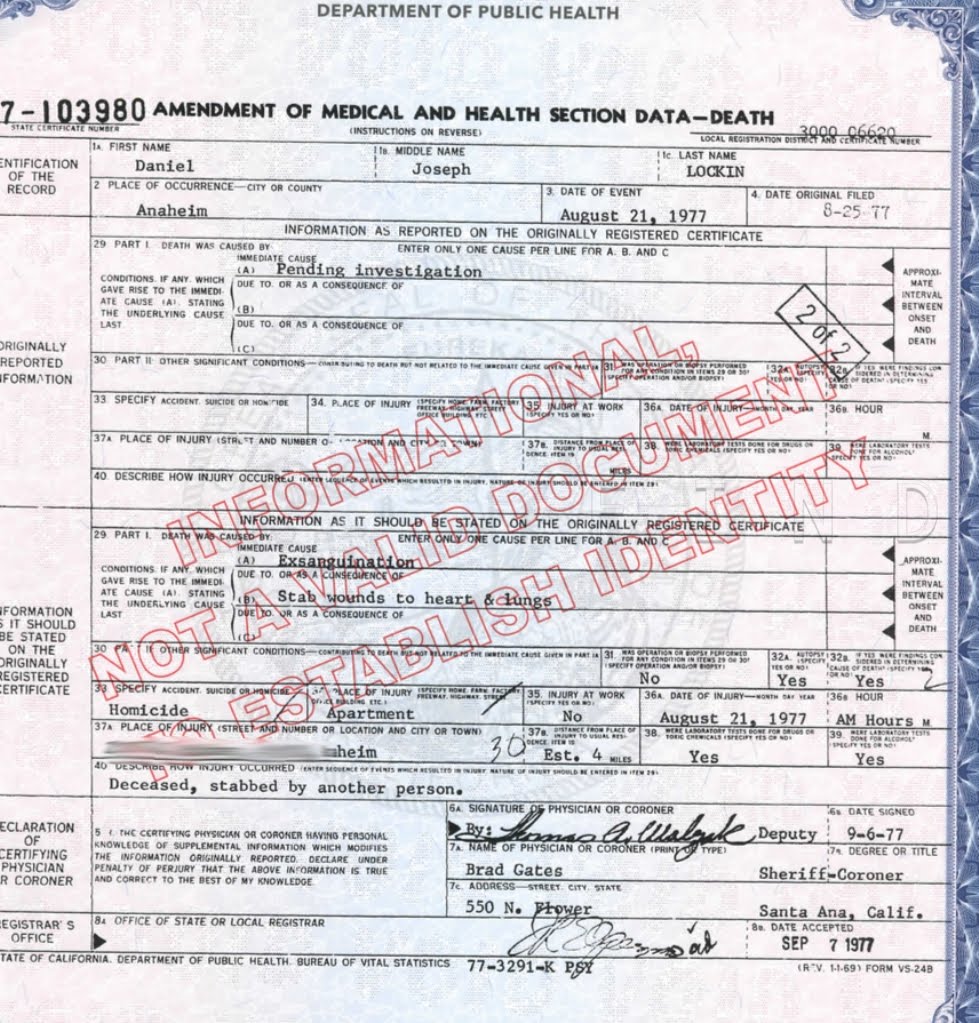 Danny Lockin was buried in Westminster Memorial Park cemetery in Orange County. His grave is in Block 29, Section 219, Grave 4 with a simple stone that calls him “Beloved Son”. 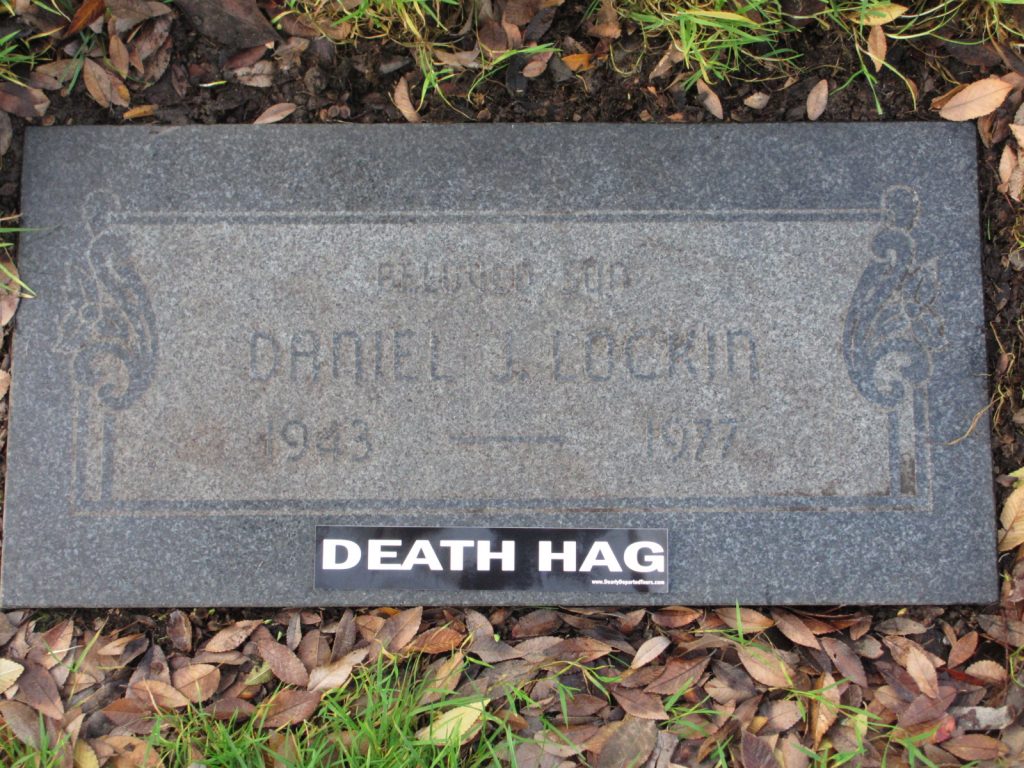 In a September 7, 1977 OC Register article titled ‘Barnaby’ Sings His Last Song, Danny’s family friend and his mother’s former dance partner Vivian Nehemias summed up her beloved surrogate child Danny: “The police came to the house and went over his room looking for (S&M instruments/adult toys) but there was no evidence of that. He wasn’t into anything kinky. He was just a good old fashioned American bisexual. He had worked hard since he was 8 playing clubs, fairs, television shows, the stage. But he became very temperamental. His temper, his demand for perfection, and drink did him in as far as show business is concerned. He fought hard and maybe he would have made it again if he had lived. Danny was many people. He was very complex and very talented. He tried to go his own way. That’s showbiz.“

Mrs. Jean Lockin continued to teach dance until she suffered a series of strokes in the late 1980s. She passed away of pneumonia on May 23, 1990 in Fountain Valley, Orange County, CA.

The murderer reportedly died in 2006 of a heart attack and lung cancer.

Prior to his death, Danny Lockin was considering a career in choreography and starting to  record an album of original songs. The working title of the record was obviously not called: “What Was Barbra Streisand Like To Work With?”

This contract is for his appearance in a 1961 local ‘Polka Parade’ tv show. 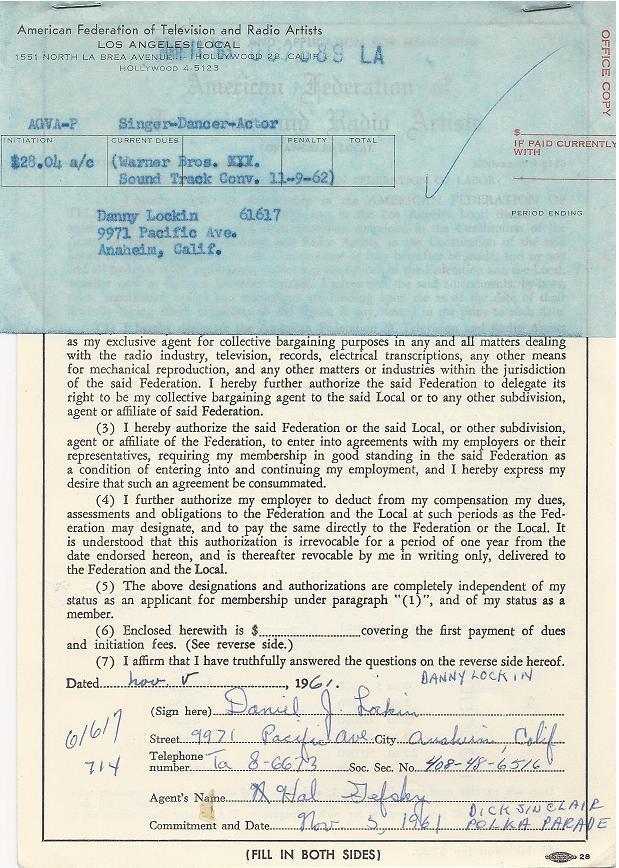 The Lockin home in Anaheim is now a recovery home for women overcoming addiction problems. 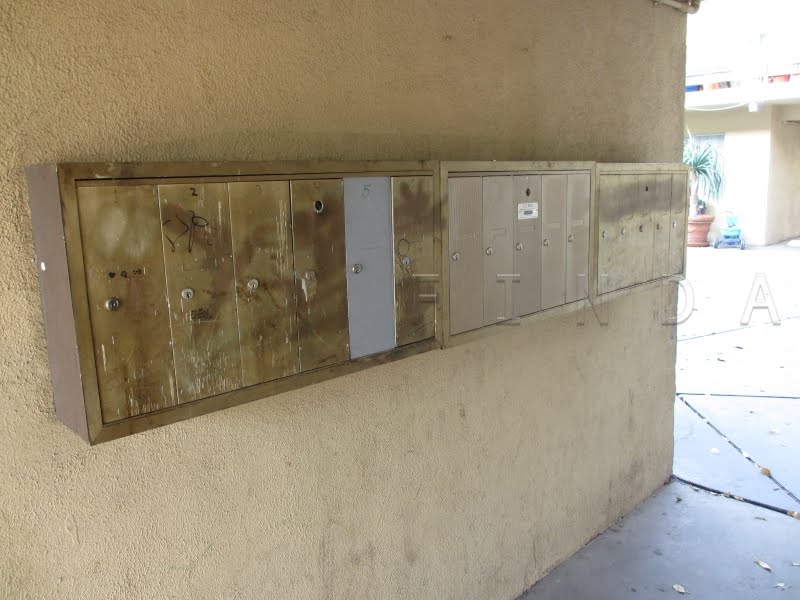 I think Hello Dolly is probably one of the most cannibalized movie sets in history.

Here is a bar from the set of the film that has been reassembled in the Magic Castle in Hollywood. 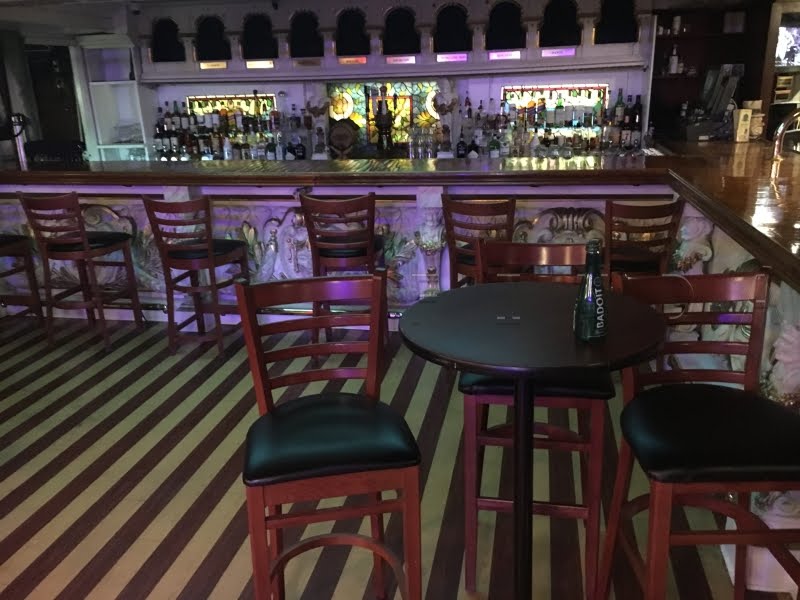 By Mark Langlois and Scott Michaels.