The Urban Dictionary says this about Darby, “Darby Crash: The ex-singer for the legendary punk band, The Germs. He committed suicide on the day before John Lennon died. He was also gay. Known for his lyrics, and his kick ass stage shows. He idolized Iggy Pop and did things Iggy did (like cutting himself on stage).”

He was born Jan Paul Beahm, and grew up in Culver City, just a bottle’s throw from MGM. Like most people in the punk scene, Darby came from a troubled family. His Father left him when he was young and his older brother had been murdered, and his mother was an abusive alcoholic. Darby attended University High School with his friend Pat Smear, in Los Angeles. Oddly, the two went to a special branch of the school which experimented with progressive EST and Scientology pedagogy. Darby and Pat’s first band was called Sophisifuck and the Revlon Spam Queens. When he started this proto-Germs band, Darby was going by the name Bobby Pyn.

Darby formed The Germs with Pat Smear (guitar) and Lorna Doom (bass).  Darby sang lead. The Germs became known around Los Angeles for their chaotic shows. The group released one single when Darby was alive in 1977. Onstage they had a ritual called a “Germs burn.”  Darby would put out a cigarette on some lucky pledge’s arm, thus scaring him or her with the mark of his band (hence the name “Germs burn”).

During his lifetime, Director Penelope Spheeris filmed a documentary about the LA Punk scene called, The Decline of Western Civilization (released 1981).  You can check out Darby in action in the film.  I had a youtube clip here, but they SNATCHED it down.

Darby broke up The Germs in 1979 and went to England; it was there that he started his heroin habit.  Upon returning to America, he formed the short-lived Darby Crash Band. I’ve been told by friends that Darby was a user, but I never saw the junkie side of him. I know some thought of him as a crybaby or a pain in the neck. I don’t remember Darby that way. To me, he was a talented and creative person.

The last time I saw Darby was about a week before he died.  I was told by a friend that on December 7, 1980 he had an unnamed girl buy heroin, and gave her some (just enough to make her pass out).  He then slammed the remaining smack into his veins, and became a rock ‘n’ roll legend. Friends knocked down the door to find Darby dead, wearing his prized black-leather jacket.  This happened in a guest house, behind this house. Back down the driveway, nowhere near the mailbox.  Hawking up and spitting distance to the El Coyote.

Rather incongruously, Darby was gay (or at least bisexual).  That is supposedly one of the things that put him over the edge.  Some say he decided to become a rock legend by making a momentous exit and committing suicide, but John Lennon was murdered the very next day – stealing any newspaper coverage Darby might have hoped for.

He is buried at Holy Cross Cemetery, in Culver City, California.

The group would eventually turn up (Darby featured on the poster) in The Decline of Western Civilization.  Darby had a strong presence in the film, and it made him more famous posthumously then he had been in life. There was a riot at the theatre it was premiered at. I remember – I was there. 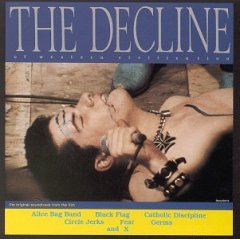 In 1993, the album “The Germs (MIA): The Complete Anthology”, which was produced by Joan Jett.

Some personal memories: When I met Darby, his name was still Paul and we would meet up at The Capitol Records swap meet on weekends. We would look for David Bowie singles and rare albums. Over time, his name changed to Bobby Pyn and then the meaner-sounding Darby Crash. The last time I saw Darby (again, about a week before he died) he told me about the documentary and asked me why I wasn’t in Los Angeles for the filming. I told him I was in England then. We were both happy to see each other.

One time we were backstage at The Whisky (I think the Mumps were performing or about to, which is how we got in) and we opened up the windows of the venue and just started throwing glass onto Sunset Boulevard. I guess we were bored; we almost got kicked out of the show. We only stopped when the bottles ran out in the backstage area.

Darby’s legacy is carried on in the book by Brendan Mullen and Don Bolles entitled “Lexicon Devil” after one of the Germs songs. There is also a movie set to be released in 2007, “What We Do Is Secret” with Shane West as Darby Crash.

This is a painting of Darby called, Chicken Out by Jessee Vidaurre. 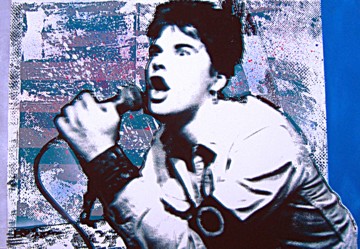 Interesting side note, Pat Smear was also in the group Nirvana for a short time, who’s lead singer killed himself as well, you may have heard, Kurt Cobain.

Darby was a bright star on the L.A. punk rock scene, but he burned out too soon. There are thousand of kids now who idolize him now, thirty years later.

Dawn Wirth was recently featured in Razorcake Magazine.  She has documented the LA punk scene with photographs, and we’re grateful for her personal memories.  Thanks Dawn.