Tis the season, right?  It’s December 12th, 2006, and I’m pretty excited for Christmas.  I love this holiday, and totally feed into the hokeyness of it.  I adore the lights, trees and even Santa hats for dogs. 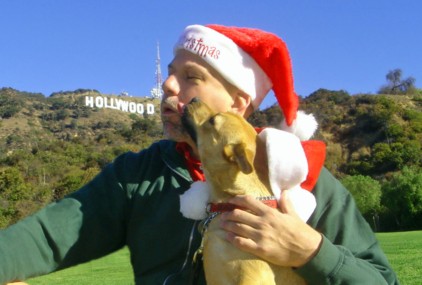 I also enjoy watching my favorite Christmas shows and movies.  I love when new films come out, and instantly (in my mind anyway) become classics.  Though hardly a new format, I think ELF with Will Farrell is fantastic.  Christmas wise,  A Christmas Story, starring Mr. McGavin, above, is classic.

Find a Death friend JCW put it well, when he said, “If he’d never done anything than be Ralphie’s Old Man, he’d earned his spot in immortality.”  True words, JCW.  It’s obviously a movie that has touched many, and I think it’s awesome that some guy bought the house from the film, and has opened it to the public.  I want to do this.  Bad.

Mr. McGavin had an impressive career, which is well documented here, including the holy grail of 70’s horror shows, Kolchak, the Night Stalker.  This show scared the sh*t out of me when I was a kid. 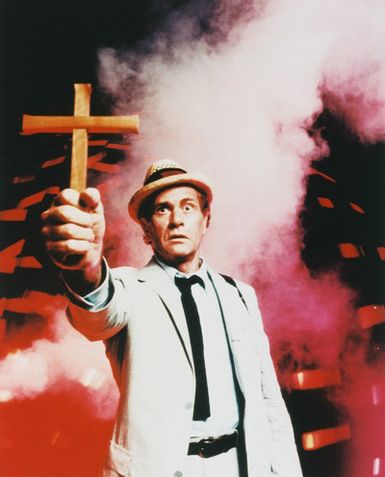 Thanks to Find a Death friend Jim Latson, we know that Darren lived in this house in Benedict Canyon, in Beverly Hills until the mid 00’s, when his health was taking a turn for the worse. 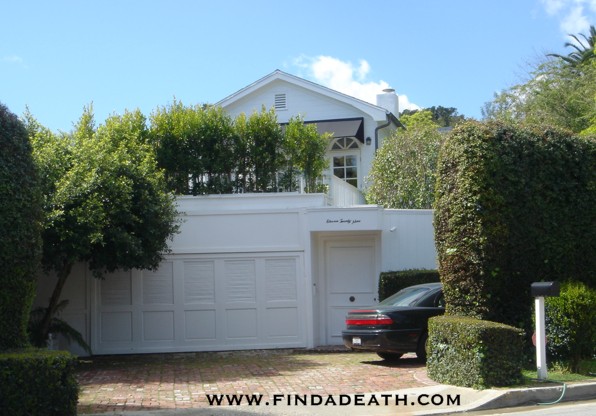 He was well liked, well respected and always responded to fan mail when written. 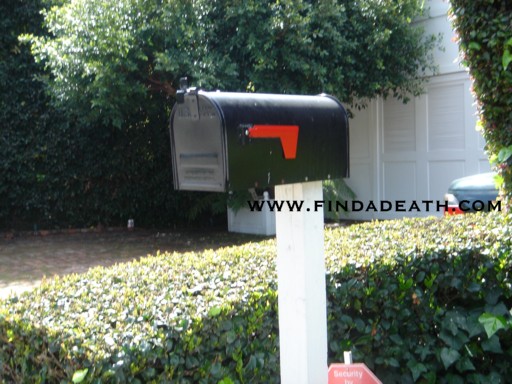 Darren’s wife Kathie died in 2003 and eventually Darren moved in with his son, York, in this lovely home in Northridge. 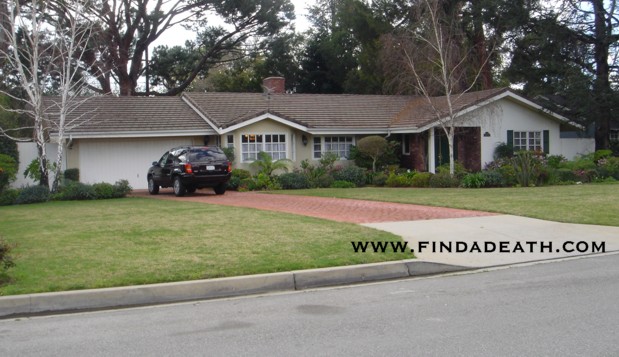 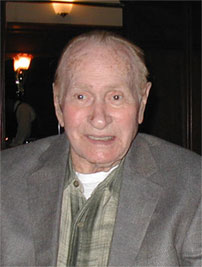 It was in this home, when Darren passed away at approximately 7  a.m. on February 25, 2006 – just three months short of his 84th birthday.

There was a public memorial service for Darren in the chapel at Hollywood Forever Cemetery on Sunday, March 5th (he was on ice for 8 days?).  The following information was taken from this website – I would link them directly, but don’t want them to lose their bandwidth, so it’s with respect that I repeat this information, and link to their terrific Darren McGavin website.

The foyer had a table filled with McGavin lobby cards and family photographs. 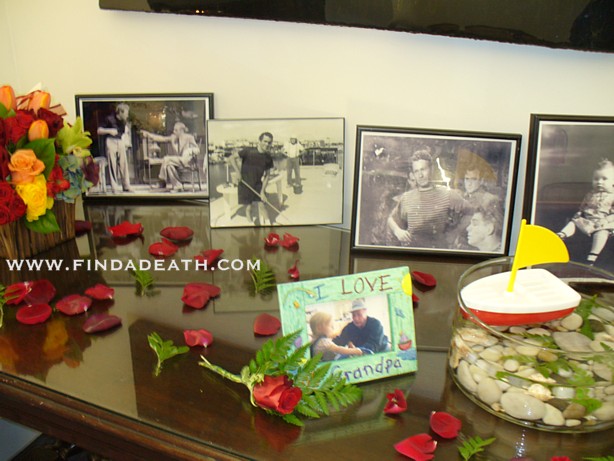 Darren’s body was actually in attendance, and he was in this very handsome casket. 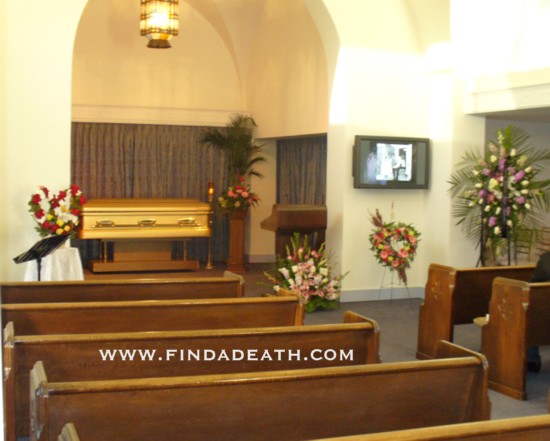 It was well attended, with approximately 130 persons showing up.  They had Sinatra singing “My Way” and “They Can’t Take That Away From Me.”  Soloists sang “In My Life” and “A Place for Us.”

The speakers included Jack Grinnage, who gave an account of his long friendship with McGavin, and read Richard Valley’s valedictory e-mail following McGavin’s death; McGavin’s granddaughter Rhiannon, about 7-years-old, who got one sentence deep into her eulogy before choking up; McGavin’s oldest son, York, who narrated a brief history of his own Life With Father, while hundreds of family photographs flickered past on a memorial DVD. The mic was left open to the attendees for a few minutes; among the speakers were Carol Ann Susi from “Night Stalker,” and the still-boyish actor, Scott Schwartz, who played Flick in “A Christmas Story.” Then McGavin’s daughter closed the ceremony with a pair of appropriate quotes from Shakespeare, recited “Good night, sweet prince,” and “flights of angels sing thee to thy rest,” and looked toward the coffin one last time.

During the recording of Darren himself singing “Shall We Dance” from “The King and I,” the pallbearers wheeled Darren’s casket to the hearse, where it was driven to the graveside for a small service. 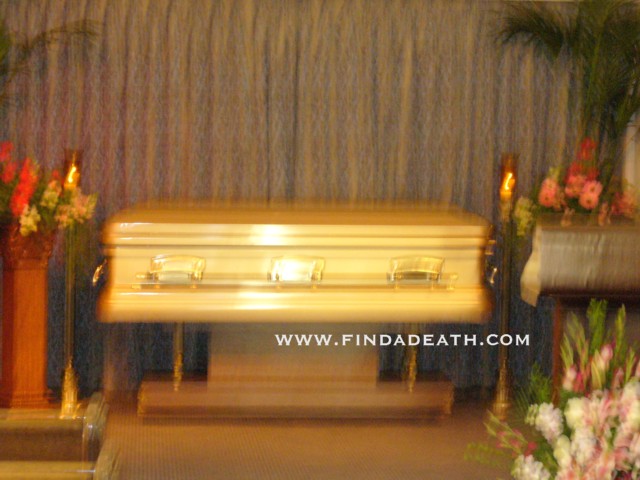 The grave had already been dug, and my pal Lisa Burks snapped this photograph. 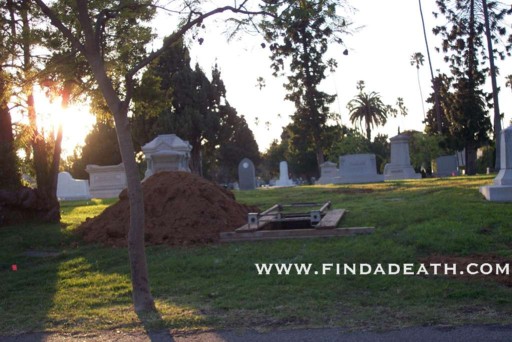 The funeral director invited attendees to deposit shovels of earth into the grave and approximately sixteen people participated.

There was some talk about Darren’s final destination, and why he wasn’t buried with his wife.  It boils down to Darren not making arrangements prior – and his children really not caring for Darren’s widow – so they had him buried elsewhere.  Take my advice, make your own final arrangements.  At least buy a grave.  Its a horrible thing to leave to someone else, who is grieving.  You want it done your way?  Do it yourself.  I did.  It just makes sense.

I drove to the graveside, the next day.  I took these photographs of the flower pile, 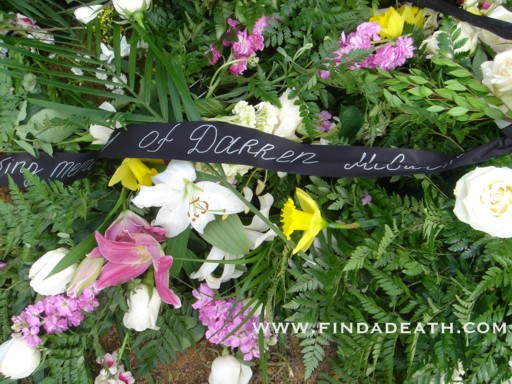 and Dekker shows up in this one. 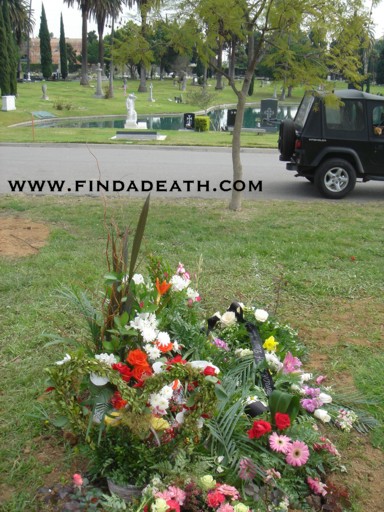 He doesn’t have a proper gravestone yet.

Trivia: In a respectful nod, they asked Darren to make a quick appearance in that abortion Kolchak remake in 2005.

Bob Clark, who directed A Christmas Story, was killed along with his son in a head-on car collision, in Pacific Palisades, CA, on April 4 of this year.

This page was is dedicated in appreciation, to Richard Waybright.