Travelin’ Through and Moving Forward

As some of you may have heard on the latest Dearly Departed Podcast, Troy and I visited Nashville over the holidays. What a great city.  We hit the clubs and the boneyards, and met up with the Jugg Sisters. We paid homage to country music legends by taking in The Grand Ole Opry in it’s most famous home, The Ryman Auditorium.  You see, the Opry is first and foremost a radio show that began in the 1920’s.  As the show’s popularity grew, bigger auditoriums were required. This radio show is how Nashville became known as the Music City.  Musicians still flock to Nashville because of the show, which is now the longest running radio show in American history.  In 1974 the Opry moved from the Ryman to a different location in Nashville (I know.  I don’t get it either.  If you care.), but for Christmas – it came back to the “mother church”.  If you tour the Ryman you can see the stage where a 13-year-old Dolly sang and met Johnny Cash, and you can stand center-stage just like Hank, Patsy, Dottie, George, Merle, Waylon, Tammy, and Minnie did. 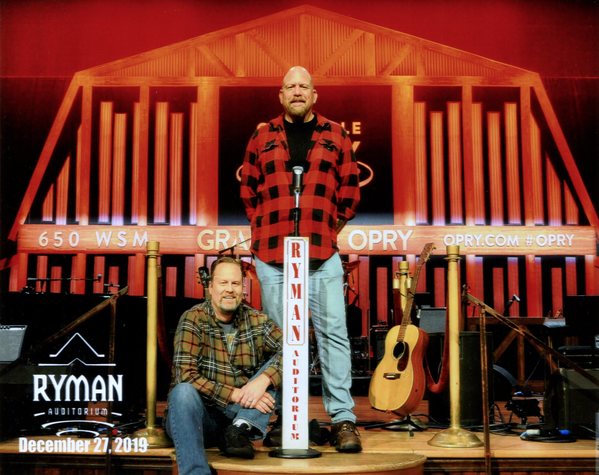 Speaking of Dolly, and who doesn’t ladies and germs, no trip to Tennessee would be complete without a visit to Dollywood (Plus if I didn’t, I’d have my homo card revoked).   Although it’s an amusement park, it’s not a place that requires you to nearly pass out from the sheer velocity of each ride.  Of course there is that element, but this place can be considered old school.  You know… glass blowing, wood carving etc. 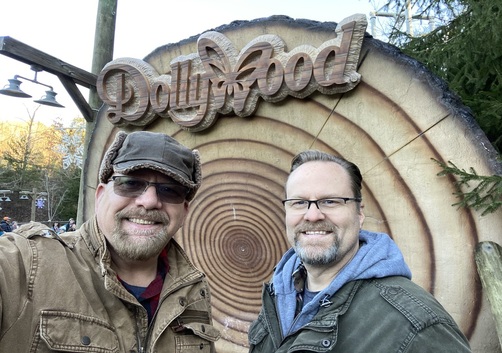 The Parton is certainly represented, but its also a celebration of the Smoky Mountains and a good opportunity for residents of that region to have jobs.  There are a lot of exhibits about the territory and even some things belonging to Dolly—including the Coat of Many Colors. Yes, that coat!  They have rides, museums, and truly revolting food.  Perfect. 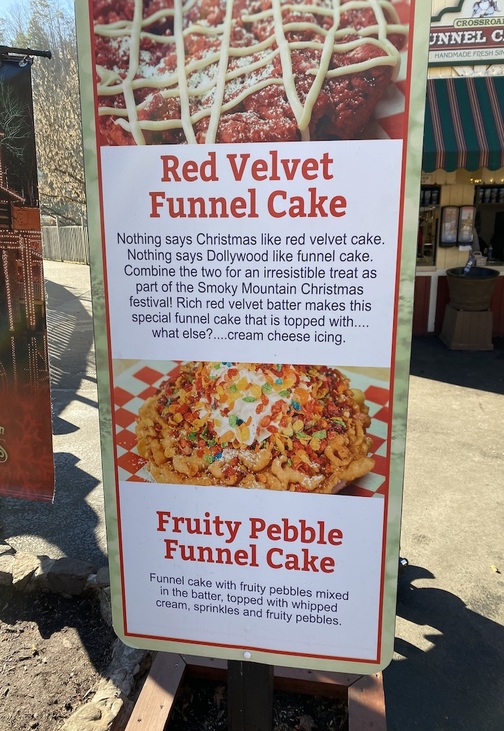 Yes, that says Fruity Pebble Funnel Cake and no, we did not.

This week is Dolly’s birthday and we hope she lives as long as Betty White who turned 137 this week.

Now, you’re probably wondering if we did any Death Haggy stuff while we were in the Nashville area.  And the answer to that question is … of course we did.  No shame in our game.  We stalked the final resting places of Porter, Johnny and June, Lynn Anderson, Donna Summer (yes she is), Little Jimmy Dickens, Stringbean… and we visited the spot where country music legend Patsy Cline literally fell to pieces (I know.) in a 1963 plane crash. 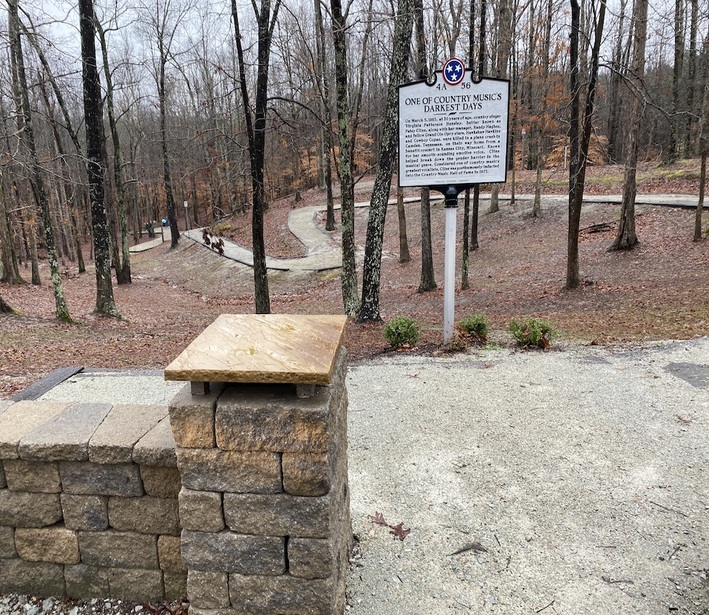 The memorial is at the end of the pathway.

At the crash site there is a memorial with the names of everyone who died in the crash.  If it said, “Patsy Cline … and the rest” it would be just as well.  Ok, that’s kind of disrespectful, but you have to admit the other passenger’s profiles have been elevated considerably because of this tragedy.  Like all good horrific accidental death stories, there is a legend that Patsy supposedly sensed something terrible was about to happen.  Spooky ironic anecdotes are fun, which is why they get attached to stories again and again … and again … aaaaaannnnd again. 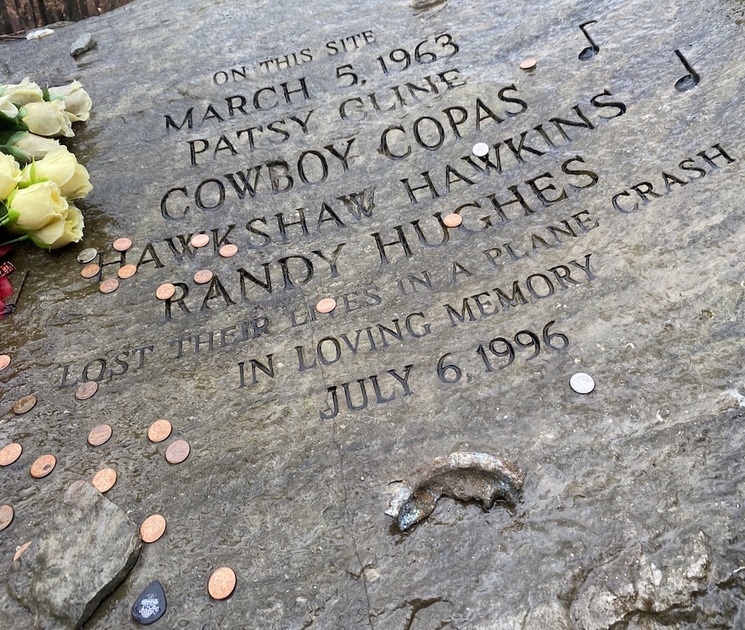 As is so often the case, the cause of the crash was pilot error. The pilot, Randy Hughes, also happened to be Patsy’s manager and the son-in-law of Cowboy Copas, who is also on the memorial. Hughes was a licensed pilot but didn’t have the right qualifications or experience to fly that particular type of plane. Because, y’know,  what the hell.  Rules are dumb.   (Maybe Patsy did sense impending doom after all.)  Hey, let’s risk the lives of friends and family, y’all!

We also took in the Alcatraz East Museum in Pigeon Forge.  All I can say is, a lot.  What a collection!  It was pretty overwhelming, and worth every cent.  Bundy and Gacy’s typewriters, the Bronco, Monica Lewinski’s purse (um..) and the machine used for James Earl Ray’s lie detector test are just a few of the things on display.  Run. Rush. Drive. 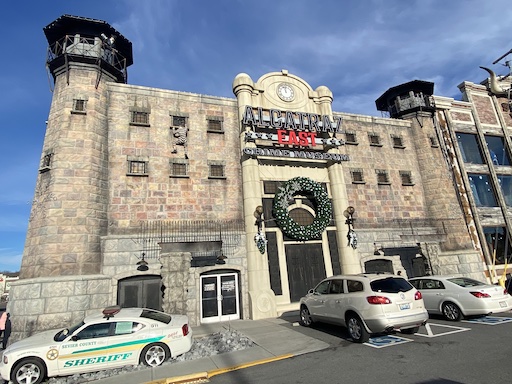 UPDATE on our own Artifact Museum

We announced a couple of weeks ago that we are closing down our Artifact Museum, we now have a definite end in sight.

The very last day to visit our museum is Sunday February 16, 2020.  On that day at 5pm we will be closing down the museum portion of Dearly Departed Tours.   Until then, we are still open Thur, Fri, Saturday and Sunday from 11 – 5.  You do not have to take the tour to visit the museum and you do not need a reservation.  The admission fee is $10.  You also get a discount coupon for our merch. 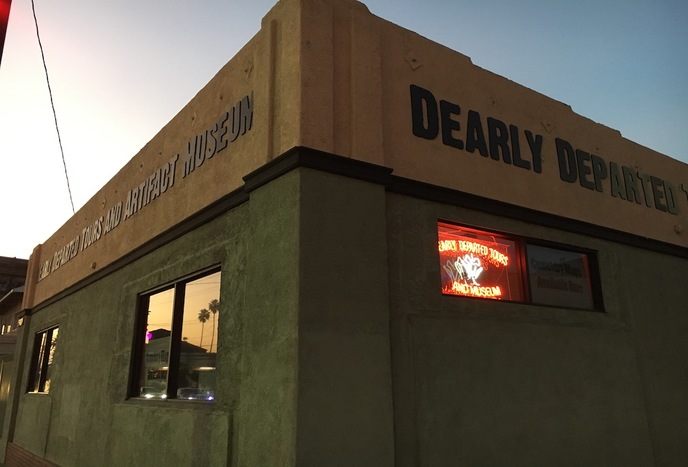 To be crystal clear (and not meant condescendingly):

No we are not going out of business.

Yes we are closing down our Artifact Museum at 5pm on Sunday February 16, 2020.

Yes we will continue to offer our tours.

No we are not selling our artifacts.  They are only “going away” for an undetermined period of time.

Unclear bit:  Until March our tours will continue to depart from our current home/storefront.  We have not confirmed a new departure location.
Someone Like You

We’ve added another Karen Carpen-tour for March 1. The annual Super Bowl Sunday tour sold out and we had requests for added tour, the day before what would be her 70th birthday.  You asked, we listened!  This tour goes through Hollywood and Downey, escorting you to relevant locations of her life and death, and finally to Karen’s final resting place in Westlake Village. 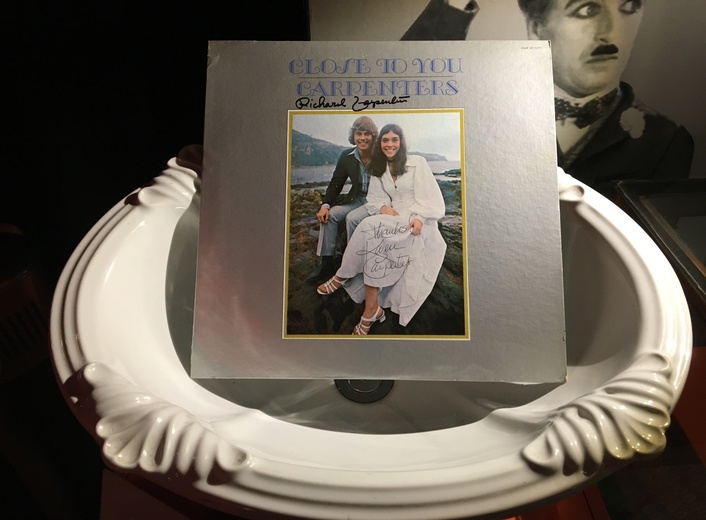 I mentioned the Dearly Departed Podcast earlier – and this week we offered a full-release of a new episode celebrating the artists and drama of the rock festival Woodstock, which took place in 1969 – exactly one week after you-know-what.  We’ve done 16 episodes of the podcast so far and it’s  picked up considerable traction.  Mike Dorsey and I really enjoy doing it – and we look forward to doing more.  We also encourage people to send in ideas to feature in upcoming episodes.  So far we’ve covered the deaths of the stars of Gilligan’s Island, Batman, The Poseidon Adventure… my working on Once Upon a Time In Hollywood and a whole lot more.  Tune in, turn on…
Daze with Jordan the Lion

Last weekend we did another tour with our friend, vlogger Jordan the Lion and his Mighty Wonderdog Jah, who now has his own YouTube channel!  We always look forward to this because Jordan has a fun take on the city and he really digs for the facts, and plus he’s a really nice guy. 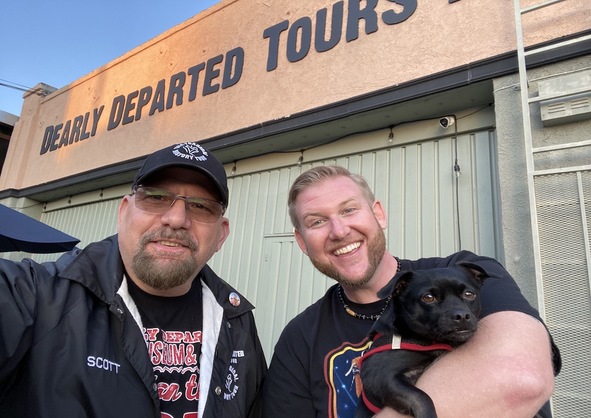 If you’re not sick of my fat fucking face yet, here’s me with Dolly. One day when I’m less mortified, I’ll tell you about the gift I gave her. Oh good god girl. 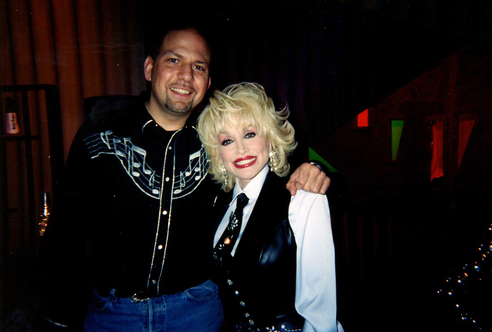 2 thoughts on “Dearly Departed Newsletter – Travelin’ Through and Moving Forward”