Hey Pizza! It’s great. Let’s dig in.
I’d like to congratulate myself, and thank myself, and give myself a big pat on the back.
Billboard called my solo album, ‘Standing In The Spotlight,’ a great party album and even said that my raps put the Beastie Boys to shame.
It was sad when Sid Vicious died… I was freaked out when Phil Lynott died from Thin Lizzy. I cried. It was too crazy.
I loved rap, especially in the early days. But I wasn’t trying to shove it down anybody’s throats.
No one in the group was really growing up besides me, which is pretty weird ’cause there was no one in that group more self-destructive than I was.
When I got into rap I didn’t exactly win any popularity contests. I called myself Dee Dee King, after B.B. King, to the total dismay of my fellow Ramones.
I started listening to and playing other music in the ’90s. It was after hearing other bands, like Bad Religion, cover Ramones songs that I started to like our songs again.
I got tired of the Ramones around the time I quit and I really got into rap. I thought it was the new punk rock. LL Cool J was my biggest idol.
I’m really lucky I’m still around. Everybody expected me to die next… But it was always someone else instead of me.
Show More Quotes
Show less

The above line are the only words that Dee Dee uttered in the film Rock and Roll High School.  See this film, find P.J. Soles, and tell her I love her.  Never mind, I did in 2008. 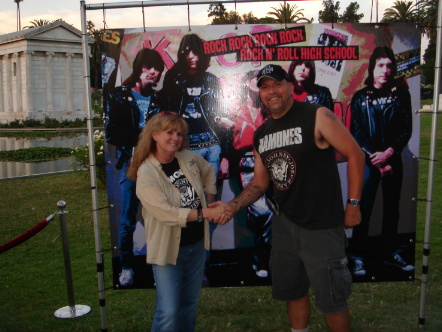 Apparently Dee Dee was a shy guy, and the scene where he says the pizza thing, was done after numerous takes.  He couldn’t quite crack it.

Dee Dee Ramone, born Douglas Colvin, was a founding member of the Rock band, The Ramones. IMHO, I always thought the Ramones were Rock, not punk, but their look certainly lent itself to be described that way. Dee Dee was the bassist and main songwriter of the group.

By all accounts, Dee Dee was a pretty nice guy. He was certainly screwed up, but he had a big heart. In fact, his heart weighed 370 grams.  Kudos towww.thesmokinggun.com, who made Dee Dee’s autopsy report available.

He left the group in 1989 and pursued a solo career as a rapper under the name Dee Dee King.  Agony.   The band finally split up in 1996 and Dee Dee joined other former members in a band called The Remains.  heh.

Dee Dee was living in this building, near the Hollywood and Highland complex. 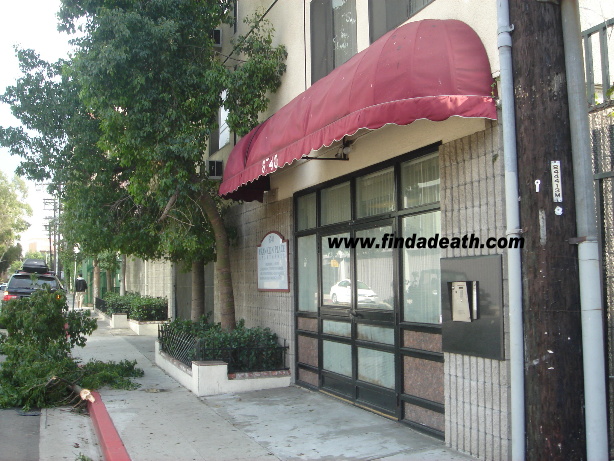 They lived in a back apartment on the second floor of this building. If you wanted to visit Dee Dee, you had to buzz him here. 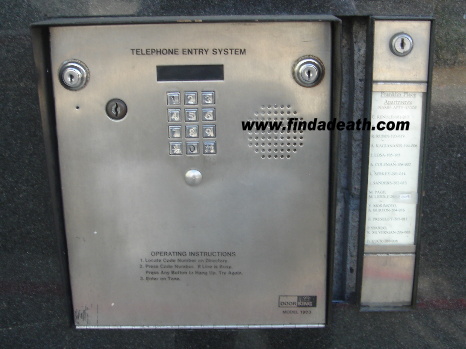 They found a needle puncture in his left arm, and his head was lying in puke. They also found needles, a spoon, and a couple of balloons commonly used to sell heroin.

His official cause of death… overdose. Accidental.

His funeral was at 9 a.m. on the 11th at Hollywood Forever Cemetery. Fellow band mates and spouses attended. Dee Dee was supposed to do a gig on the 14th at the Key Club on the Sunset Strip. 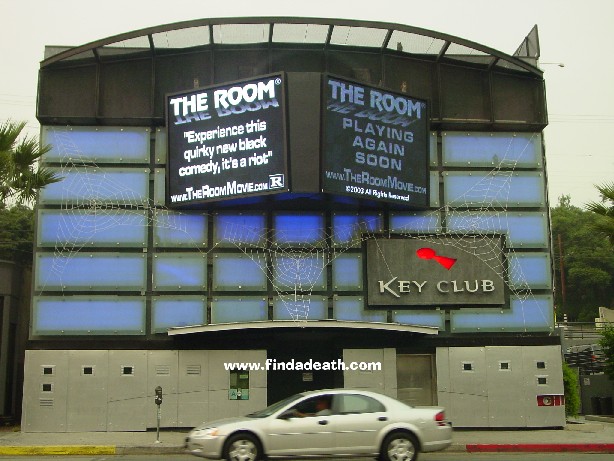 It supposedly turned into a tribute night and on the 15th, there was a memorial jam at the Cat Club, a few doors down. 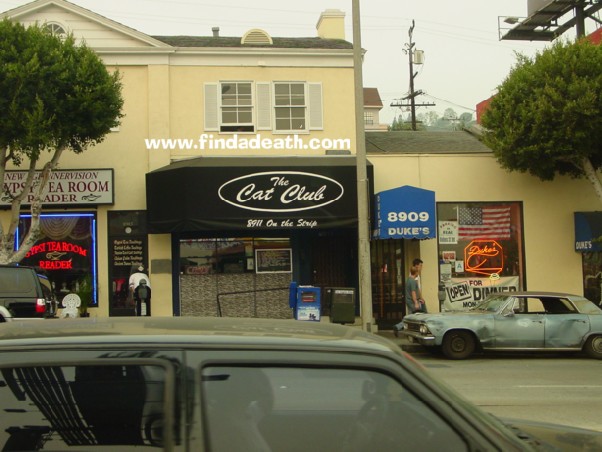 Proceeds were given to Dee Dee’s wife.

Dee Dee is buried in a nice grave under a tree at Hollywood Forever. 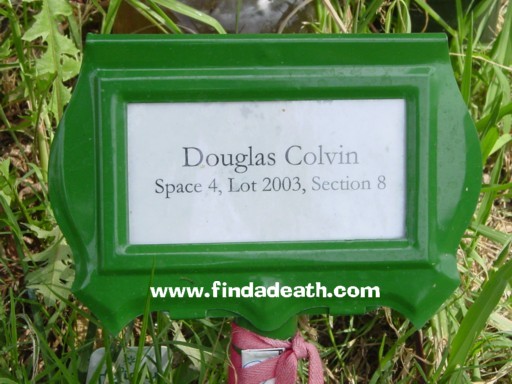 It’s been over a year, and there is no stone to mark him.  I’d be happy to donate to get one, and I know I could raise enough money to pay for it. Anyone have any info?

His mother sent flowers recently, and one night after seeing a movie there (yes, they show movies there) I shared a beer with Dee Dee. 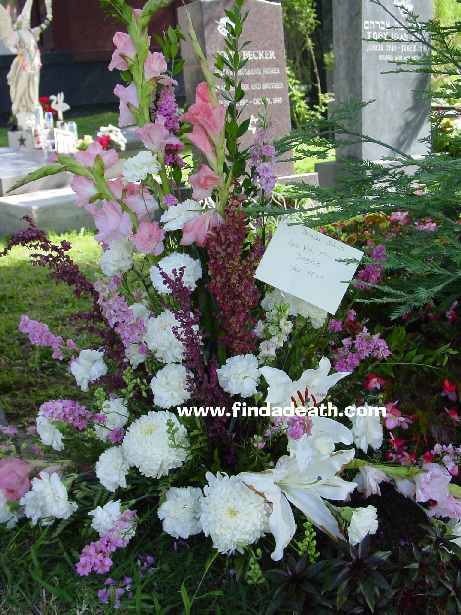 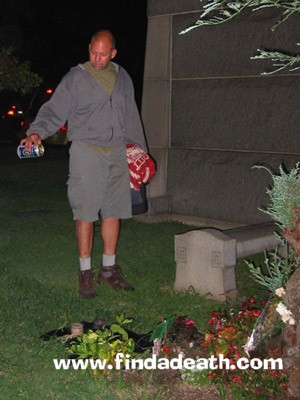 He lived long enough to see The Ramones inducted into the Rock and Roll Hall of Fame.

I’ve seen the Ramones at least 8 times, the first being in Detroit at the Motor City Roller Rink. They were fantastic, and I miss ’em. You can have all that tribute crap. Here is a great tribute: BUY RAMONES CD’s. Don’t buy some crap someone feels they are worthy enough to cover. I hate tribute records. Its like, “I love your music, man. Wait till you hear ME sing it.” Psh.

Joey Ramone died too. A year before Dee Dee, but it happened in Jersey, and I don’t have any real info. (lymphoma)

I was at Hollywood Forever recently, and there is now a concrete foundation on Dee Dee’s grave.  Maybe they are finally getting around to marking him.  Also, my buddy Dave Quantick back in the UK sent me a snappy snap of a gift I bought him last year. 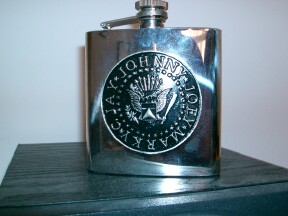 According to Linda Foster, a friend of mine that works at Hollywood Forever Cemetery, “Would you please update your info regarding Dee Dee Ramone’s monument at HFC. The monument has been designed and is in the process of being constructed (evidenced by the concrete foundation you referenced). There was no delay in the process; all of those involved just wanted the end product to be perfect for Dee Dee and trust me (!) it will be… ( exact layouts/design approval/granite shipment take time).  Please, trust me that we have done ‘good’ for DeeDee, and the wait won’t be much longer..” 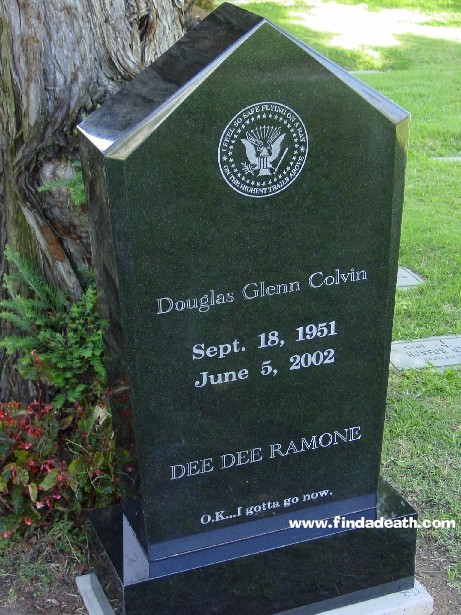 I took this picture of Dee Dee’s grave in summer of ’06. 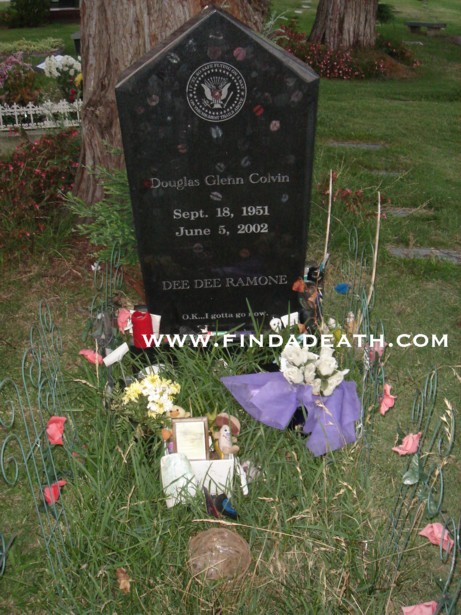 No longer dignified, its become a shrine of crap.  I understand the rock and roll aspect of it, but honestly, I wish I knew who kissed his stone, and left that shit all over it.  I would like to find their car and lick their windshield with butter to see how they like it.  Pigs.

Nearby Dee Dee’s grave, during the summer of 2008, I had the honor of meeting C-Jay and Founding Ramone Tommy at the annual cemetery event.  Truly an honor for this Ramones geek. 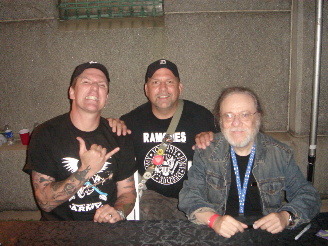 I own a copy of the Ramones Docu, End of the Century, and I’ve watched the end of this thing probably a dozen times.  Poor Dee Dee looks pretty out of it, and I’ve never been able to figure out what it was that he says. My friend Jayne Osbourne deciphered it for me:

As Dee Dee is leaving, someone told him to stop being pissed off.  Dee Dee says something in another language, and then says, “I’m practicng for Brazil.  Oh God poor Dee Dee.”

My pal Mark Masek adds, “Oh, and when Dee Dee is leaving the hotel room, he says ‘cinco minutos,’ – ‘five minutes’ in Spanish.”

Rest in Peace, Dee Dee.  You made me very happy.