They say I live a fast life. Maybe I just like a fast life. I wouldn’t give it up for anything in the world. It won’t last forever, either. But the memories will.
All I need is a big surfboard and a piano.
There will always be a Beach Boys. Being a Beach Boy is like being in love.
The thing I wonder about is where does Brian’s creative spark come from? Not his subjects or anything, but his spark. What makes it so great for me is that I really don’t know. There’s a mystery behind Brian, even to me.
I made a dollar a day sweeping a laundry out. Then we made a record that was number two in Los Angeles. We got so excited hearing it on the radio that Carl threw up.
The one thing that kept our family together was the music. The only thing that our family would share emotionally was to have our dad cry over something the kids did with music.
The Beach Boys are not a superstar group. The music is the superstar of the group.
Brian was the oldest, I was in the middle and Carl was the baby. I was the troublemaker. Brian got great grades and Carl got the kind of grades I did. I failed everything. I was too busy fighting and running wild.
My dad was a tyrant. He used to physically beat the crap out of us.
I can tell you the day The Beach Boys will no longer exist – never. We’ll be on stage in wheelchairs.
Show More Quotes
Show less

Dennis Wilson is the only Beach Boy to have ever surfed in his life.

Big snaps to Jon Stebbins and his bio called The Real Beach Boy. I hope he won’t mind, but I borrowed a couple of quotes from his fantastic book on the man.

Dennis’ life with the Beach Boys was certainly peppered with ups and downs. Their abusive father, Murray, managed them from the beginning, and pushed them to the edge. If you’ve ever heard that infamous recording session when Murray really lit in to the guys, you know it got to extremes, and Dennis couldn’t cope. Brother, Brian, didn’t do any better, and if anyone has seen Brian in recent years, well, you’ve seen the toll that all those years of struggle have taken.  Who would have thought that Brian would be the last Wilson brother alive?

Unfortunately, because of Dennis, The Beach Boys would always be associated with Manson and the Helter Skelter murders. That connection IS Los Angeles to me. In 1968, Dennis picked up a couple of female hitchhikers and took them back to his place on Sunset, near the Will Rogers State Park. That was opening the door. By the next night, the place was crawling – to borrow a joke from my pal, Ally, “like cockroaches in a bad restaurant” – with Family members, including Charlie himself. Through the connection with Manson, The Beach Boys actually recorded one of Charlie’s songs on the 20/20 album. Charlie’s version was called Cease To Exist and the group changed around the lyrics and renamed it Never Learn Not To Love. Dennis was once questioned about the integrity of recording that song, and he responded by saying that Charlie didn’t want writing credit, he wanted cash. He’d stolen enough from Dennis that he felt just in recording the song, and not giving Manson any residuals.  Both songs are on YouTube.

Dennis owned a 62-foot Yacht named Harmony.  He bought it when The Beach Boy money was big, and it was his pride and joy. Once he stood on the ship and looked out into the water and said that the ocean is where he belonged, and that’s where he wanted to be buried.

His passion for alcohol and coke led to a very tortured relationship with the rest of the group. He would be invited back to perform with them, eventually screw up, and get the sack. He’d go to rehab and rejoin the group, relapse and leave again. The money became less frequent, and he fell behind in his payments on the yacht. The bank repossessed it, and Dennis hit the skids. His fellow group members cut him off financially, in hopes that he would complete a rehab program, but Dennis would consistently relapse. He was a generous man who knew how to help everyone except himself.

For some reason, his address at the time of his death is listed as 9744 Wilshire Boulevard. 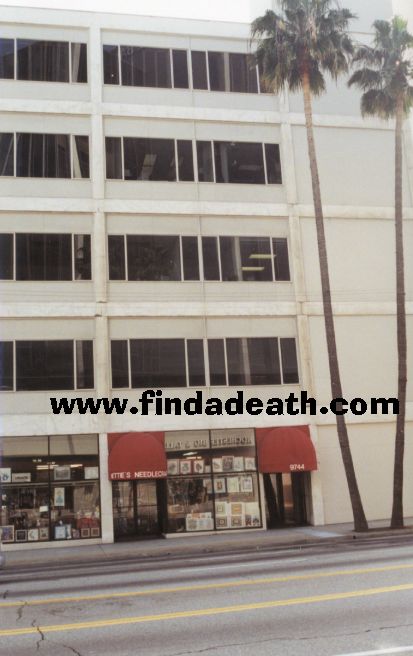 I am sure this was just his office. Here is the front door, 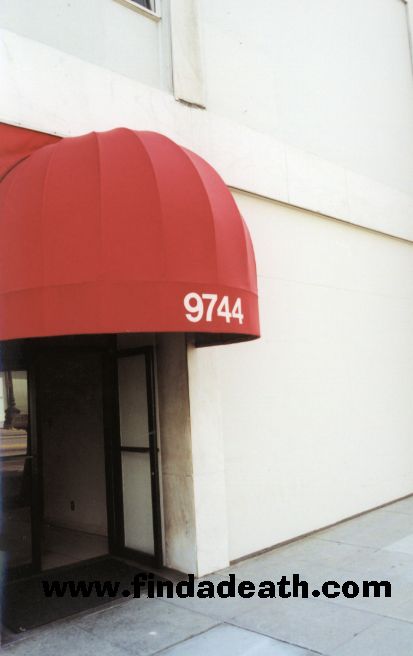 and inside the building are these elevators. 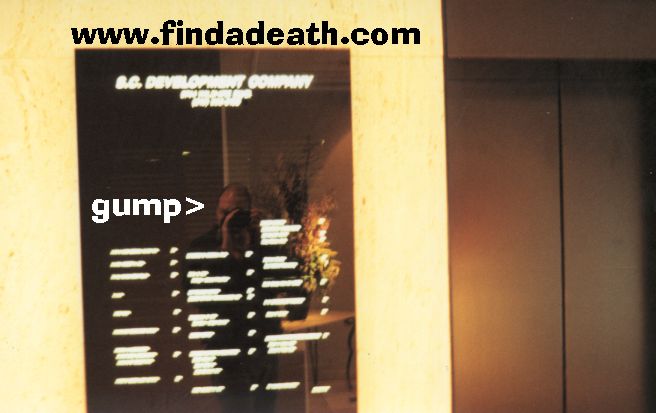 No doubt they didn’t want his last home to become a tourist attraction, so it was probably the family lawyer or something similar.

At the end of December 1983, Dennis was once again out of rehab, unsuccessfully. He took to hanging out at the docks where his old Yacht used to be berthed. He met up with old pal Bill Oster, who had a yacht called Emerald, near where Dennis kept his before. 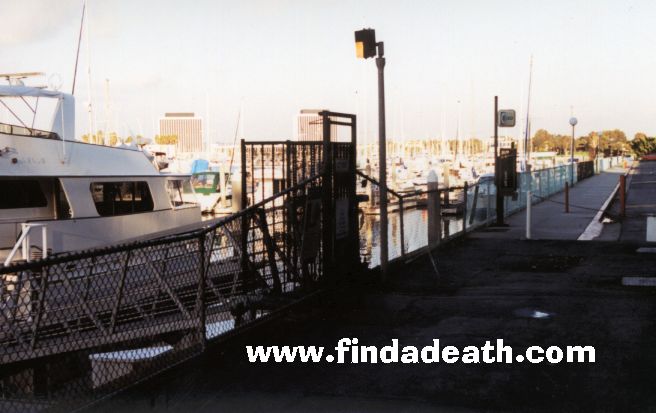 Emerald was docked in this Basin, number C-1100. 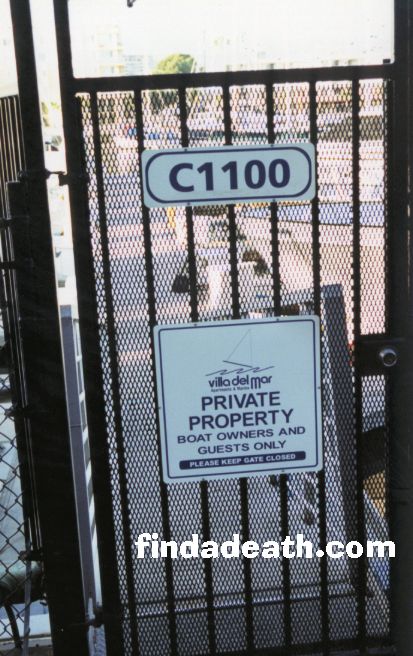 Dennis and his current girlfriend Crystal McGovern, spent the night of Tuesday the 27thon the vessel. Dennis drank.

When he woke Wednesday morning, he began with screwdrivers at 9. Atta boy. He and Bill cruised around the marina in a rowboat to visit old friends, and returned to Emerald. After lunch (turkey sandwiches) around 3 o’clock, Dennis announced he was going for a swim. Everyone thought he was nuts, because the water was so cold (58 degrees), but everyone also knew that he was unpredictable and there was no stopping him. He dove in wearing only cut-off jeans, and swam underneath the spot where Harmony was docked before. 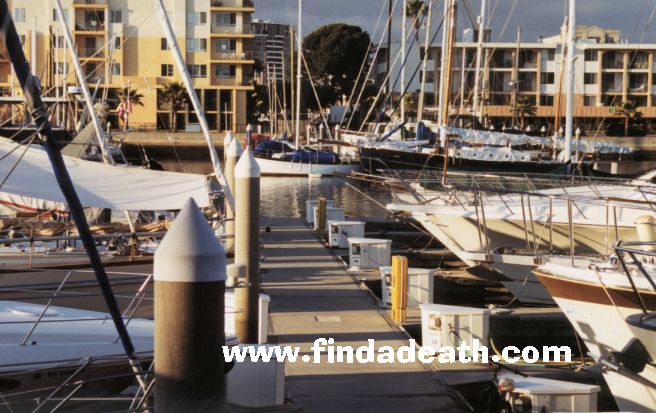 He’d combed the ocean floor (12 feet below), and emerged from the water holding a picture of an ex-wife, that he threw from Harmony years before, in a fit of anger. Dennis dove again for more treasures.  He resurfaced after the second dive, stating that there was a large box at the bottom of the ocean and he needed rope to lift it up.  After the third dive, he didn’t resurface.

Dennis was known for practical jokes, and people didn’t worry too much. Yet. They even checked the local bars to see if Dennis was hiding out there, to no avail.

Dennis drowned. At 4:40 pm, Oster flagged down a passing Harbor patrol boat. After they arrived, it took four divers working in the dark with a pole, probing the ocean floor, 30 minutes to find Wilson’s body. 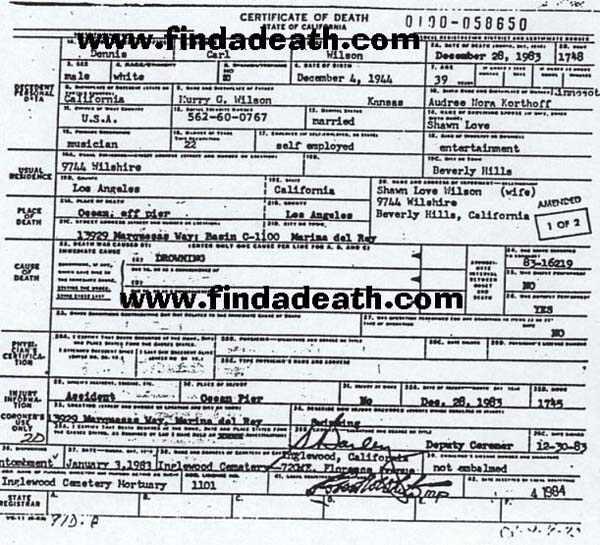 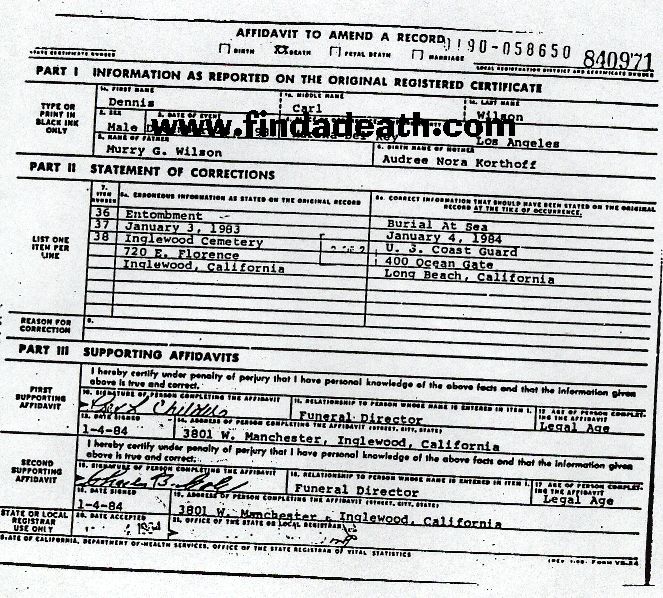 Because of the hassle a couple of years earlier with James Watts and his criticism of The Beach Boys music, the Reagan administration decided to make an exception and allow Dennis to be buried at sea, not cremated. 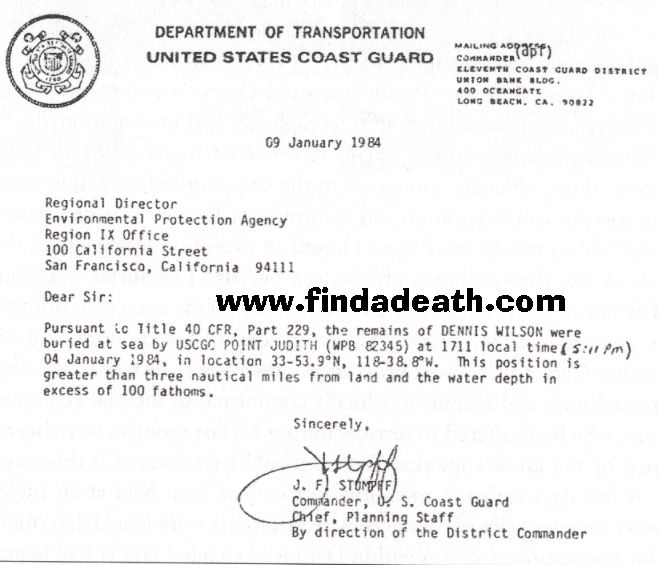 On the 4th of January, Dennis’ family was part of a three-boat procession, where Dennis was finally put to rest at sea. God, he was only 39 years old.

When Charles Manson learned of his death, he commented, “Dennis Wilson was killed by my shadow because he took my music and changed the words from my soul.” Loser.

Trivia: Dennis once owned a red Ferrari that belonged to singer, Sam Cooke. Dennis loved Sam and would often play his music in the car.

More: Ever hear the song “Monkey’s Uncle”? The Beach Boys recorded the song with the wonderful performer, Annette Funicello, who I’m so sorry to say will probably end up here soon enough. The film was classic, and one of the rare film appearances for the group.

Sent in by Find a Death friend Kevin Hassell:  He was the only member of the Beach Boys that could actually surf.  I forgot about that Kevin, thanks!

My buddy, Steve Smith, sends in:  Don’t forget that he was very much involved with Christine McVie of Fleetwood Mac fame. Included on the Fleetwood Mac 1982 Mirage album is the song: “Only Over You” which she wrote specifically for him.  Thanks, Steve!

Find a Death friend Tanese sends this in:  Shawn Love Wilson listed on the death certificate was Dennis’ wife that he had a son with. This is where the story gets kinky. Apparently, Shawn was the daughter of fellow Beach Boy, Mike Love – Dennis’ cousin, also making Shawn his cousin! Mike denied her because she was conceived from an affair he had while married to his first wife. Mike and Dennis had a rocky relationship, and apparently Dennis married Shawn to spite Mike. I’ve heard of kissing cousins, but that was ridiculous.  Thanks, Tanese!

This has nothing to do with his death, (then again, I guess it does!) I’ll never forget seeing the Beach Boys on “Good Morning America” sometime in the late 70s/early 80s. Dennis was absolutely WASTED!  he could barely hold his head up, and when he did, it would fall back down again. he tried to speak once or twice, to no avail. the other members seemed to ignore him thru the (thankfully) short interview.

Wanna see something really sad?  check out the footage of Dennis “singing” Joe Cocker’s “You Are So Beautiful” during one of his last appearances with the group!
(on one of those BB documentary videos).
Joe Brya. Peekskill, NY.  Thanks, Joe.

Just surfed and enjoyed “fact finding” on your page….You should note that it was Dennis Wilson who wrote the words for “You are so Beautiful”, according to Jon Stebbins book “D.W. – the real Beach Boy”, Dennis also wrote with Daryl Dragon, before Dragon married Toni Tennille (Some of the songs on the Captain and Tennille’s first LP were Wilson and/or Beach Boy songs). Also, you don’t mention that late Beach Boy brother Carl was the son-in-law to Dean Martin (Carl’s wife when he passed was Gina Martin Wilson). The Beach Boy/Dean Martin connection doesn’t stop there…Carl’s first wife was Annie Hinsche, sister of Billy Hinsche, member of the Sixties trio…Dino, Desi and Billy!!! Billy later joined the Beach Boys touring band and still supports the Carl Wilson walks against cancer.

Carl’s son “Justyn Wilson” (by Annie) and Dennis’ son “Carl B.Wilson” (by Barbara) are members of the L.A. power trio “In Bloom”.

Dennis was the pretty one. He loved life, and loved booze and drugs a lot too. He knew Charlie Manson.

NEW DECEMBER 13, 2001! Find a Death friend Karen Valentine sent this picture of the house Dennis lived in, when he partied with the Manson Family.  Thanks Karen! 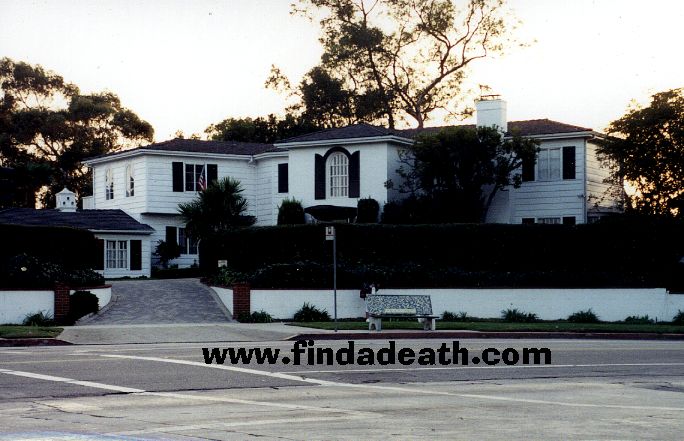