Good things do not come easy. The road is lined with pitfalls.
At times we were criticized for doing too much slapstick. I don’t believe in mild comedy, and neither does Lucy.
A single prop that does not look real to an audience can louse you up. The same is true of the smallest flaw in setting up the motivation in a story line.
Since I was very young I have always worked hard at whatever I have had to do.
Failure is the most terrible thing in our business. When we fail, the whole world knows about it.
My Latin temper blows up pretty fast, but it goes down just as fast. Maybe that’s why you seldom hear of ulcers in Latin America.
American people have the ability to laugh at themselves. It is one of the things that makes this country the great country that it is.
An actor who is good at comedy can also be very good at drama, but not necessarily vice versa.

The success of I Love Lucy is something that happens only once in a lifetime, if you are fortunate enough to have it happen at all.
Drinking intensifies all your pressures and your needs.
Show More Quotes
Show less

Again, Findadeath.com owes a debt of gratitude to Anne Parisi, for generously donating her time and film, so we could all enjoy the photographs of Desi’s last breath location. Thanks Anne!

After getting divorced from Lucy in 1960, Desi eventually bought a home in Del Mar, California. Right on the ocean. His address was 1920 Ocean Front. Here’s what it looks like now. 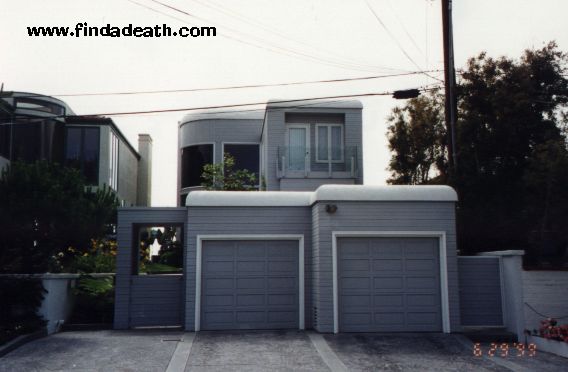 He lived in this house, with his second wife, Edith, until she died in 1985. Here’s another picture of the house. 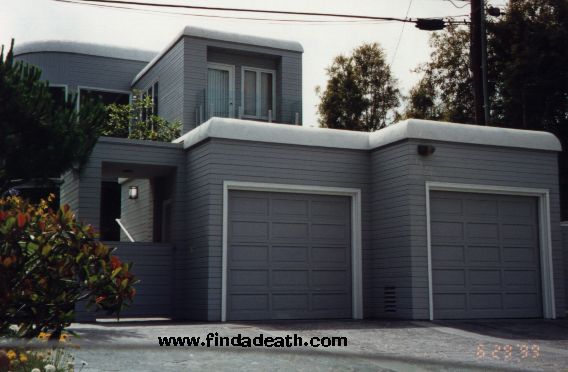 After Edith’s death, Desi typically drowned his sorrows in booze, but with the help of the ever-talented Desi Arnaz Jr., he got off the bottle, but not before the damage was done.

He was diagnosed with lung cancer in early 1986 – and he lived out the rest of the days in his beachfront home. 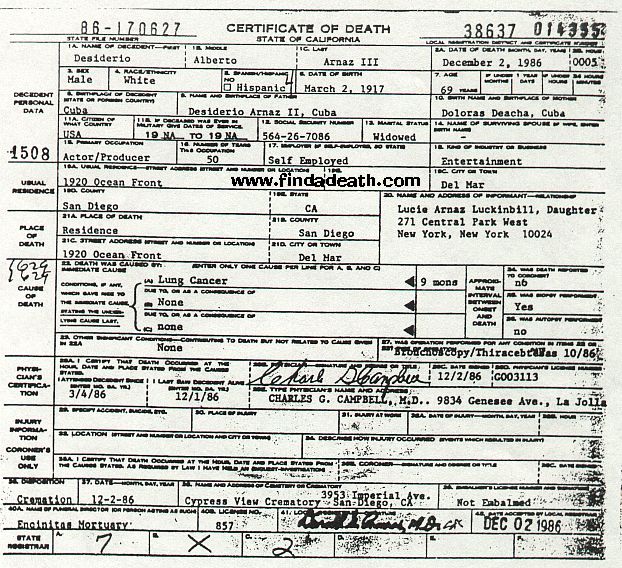 He died at 5 minutes past midnight, on December 2nd, 1986. From what I can tell, his daughter Lucie was with him when it happened. This is the front door they carried his body out from. 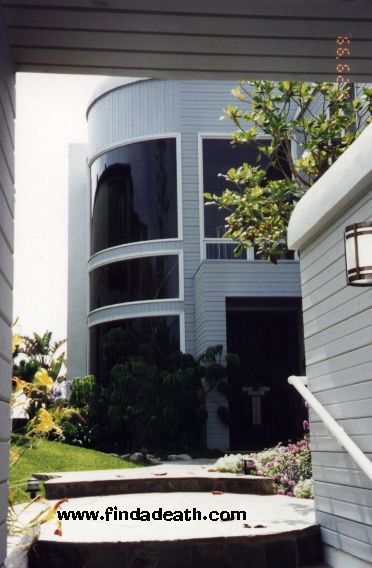 Desi’s body was taken to the Cypress View Crematory, on Imperial Avenue, in San Diego. He was cremated there, and eventually, his offspring had his ashes scattered. Juicy Lucy Ball probably lit up, in his honor. They spoke for the last time, on November 10th.

By the way, Desi’s last appearance on film, was as Raul Julia’s father in The Escape Artist.

On one very dark and intoxicated evening, my buddy Steve and I decided to go on a “creepy crawl” of Beverly Hills. We both knew that Lucy’s old house was vacant. If you look closely at this photo of the house, 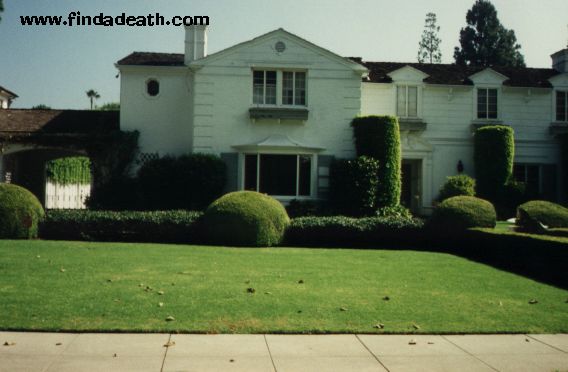 notice the shutter to the right of the front window. See how some of the slats are missing? Well, now look here.

Funny, huh? I would have got the whole damn thing, if it weren’t attached to the house. Glad I did it, now.

Trivia: For no good reason, I’ve chosen to include this review from a show that Lucie Arnaz did in Chicago – probably around 1990. 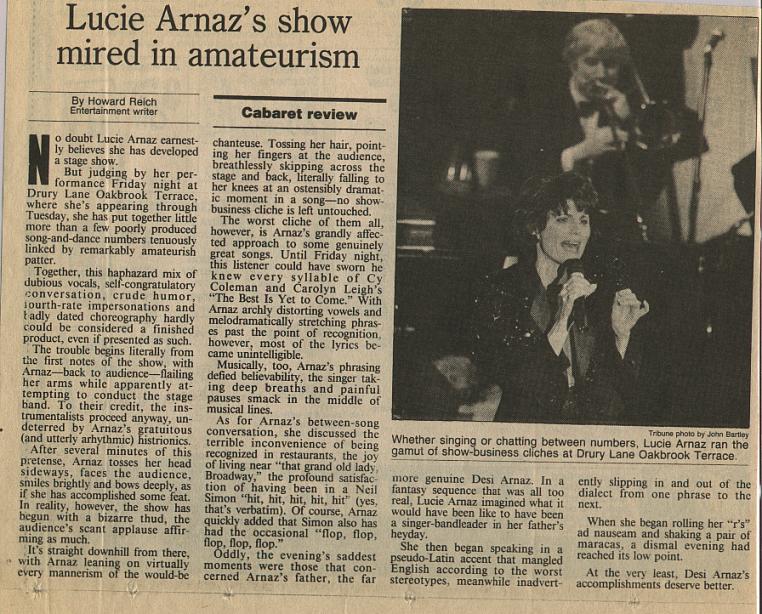 I often read it, and share it with fellow bad taste aficionados. Enjoy it. I sure have.

January 2002 – Findadeath.com friend Kevin Hassell was kind enough to provide me with a video tape of the 50th anniversary of I Love Lucy, hosted by Lucie Arnaz, and Desi Jr. For the clips alone, it was a good watch, however, the rest was just an embarrassment. Those two children and their shameless self exploitation – it was cringe making. When they sang their duet about Cuba, I thought I was going to ralph. Lucy would have given them a good smack, I’m sure. Two thumbs down.

In my email box this week, from Findadeath.com friend Jean Browder:

“Your take on Lucie Arnaz was right on the mark. I remember when she was just starting that production for cabaret, it was in San Bernardino, CA at the old California Theater. The company have had a contract with Wyatt Cafeteria, and every night for a week she would come to eat dinner.

She was a total bitch to all of us that worked there. She really thought she was so above everyone, and ordered us around like we were her slaves. Most of us were in high school at that time, and on the last night she was there when we saw her coming down the line, we all taunted her with cries of LUCY, LUCY really loud, slopped the food on her plate and treated her with rudeness like she had all of us.

Now, my family has known several celebrities in our days, but she was the true Hollywood queen of bitches. It was cool, though, because Desi called one night, and I answered the phone. He said “I would like to talk to Lucie Arnaz” I knew it was him because of his accent. I said “May I ask who is calling?” He said “This is Desi Arnaz, her father” I don’t know what the conversation was between them, because the manager took her to his office for the call.”

Findadeath.com friend Mike Pare writes:  Lucy spoke to Desi, by the way, 2 days before he died. After Edie died, he for some time lived in Lucy’s guest house (bet Gary loved that)!!! Lucie Arnaz can be a pain, and she’s got a bug up her ass about her Mom, though it didn’t stop her from collecting many many millions. Desi Jr. is a MUCH nicer, real person, not an ounce of Hollywood bullshit in him.

I was just reading your post about Desi Arnaz.  Though I never knew him personally, but I thought I would share a few stories about him:

I grew up in Solana Beach in the late 60’s and through the 70’s. We lived on the bluff in an apartment complex on Del Mar Shores Terrace, (this was before all those condos were built). My dad and I used to climb down to the beach early in the morning to go fishing.

There were several occasions that Desi Arnaz would be taking a morning walk on the beach, and stop to talk to my dad. He was always very polite, asking about how the fishing was going, etc. We would see him in the summer time mostly, because he would come down for the Del Mar Race Track season.

Another time, we saw him at the race track sitting at some box seats with some of his friends.  There was a horse running named “PapaLou”. Before the race, they were all laughing and having a good time. I could hear him singing “PapaLou” to the tune of Ba Ba Lu. Sure enough, that horse won, and paid pretty good too since it was a long shot. By then, they were really partying.

The last time I ever saw any of the family was in 1978 when I graduated from high school. I was working at the McDonalds, which was brand new then, off of Via De La Valle just north of I-5. I had already given my notice there, and on the last day I worked, the last customer I waited on was Desi Arnaz Jr. I could not believe it when he walked in, he was so cute.

More, March 2002:  LOVE your website! I just found this the other day while messing around. I grew up in the 70’s in Del Mar California, and Desi Arnaz was a fixture around that time. My brother got his haircut at an old barbershop that was on the corner by the beach.

Desi was totally white haired by that time and sadly, he looked about 20 years older (1976) I never forgot how nice a man he was to my brother and I, none of the Hollywood stuff–just a really nice man! Would like to talk to Karen also, I remember the McDonald’s when it was brand new, I think I graduated the same year as her.

December 2003: Findadeath.com friend Mike G sends us this great pic of Desi’s house, from the beach front.  Great shot Mike, and thanks for the new perspective.  -Scott. 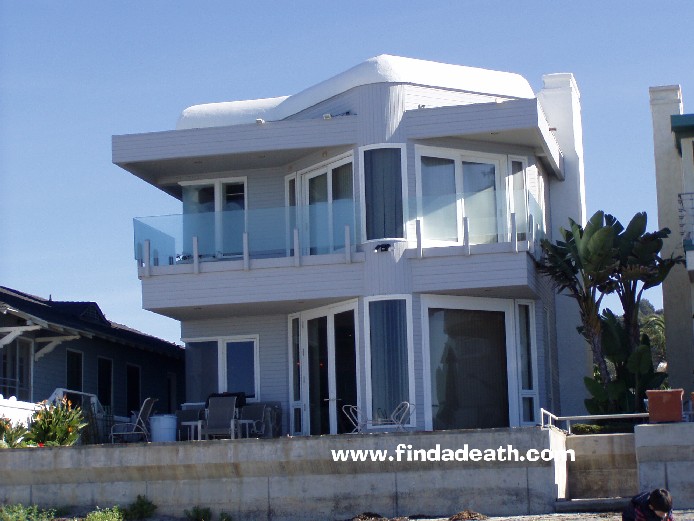