Somebody was always putting me down.  I was never free to be myself.

In the words of her famous father, “Kids do the darndest things!” Diane, daughter of television host Art Linkletter, did the darndest thing of all on October 4, 1969. She was living in apartment #610 of the Shoreham Towers. 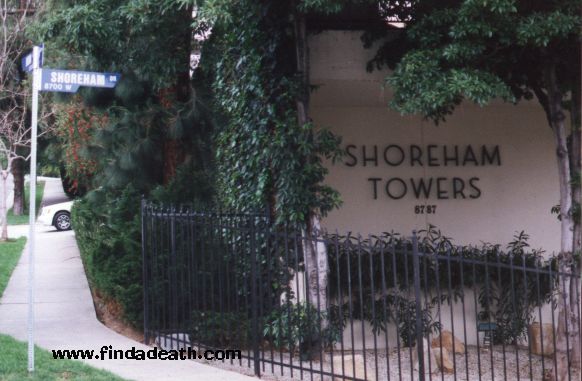 It is located just off the Sunset Strip, at 8787 Shoreham Drive, in West Hollywood, CA. 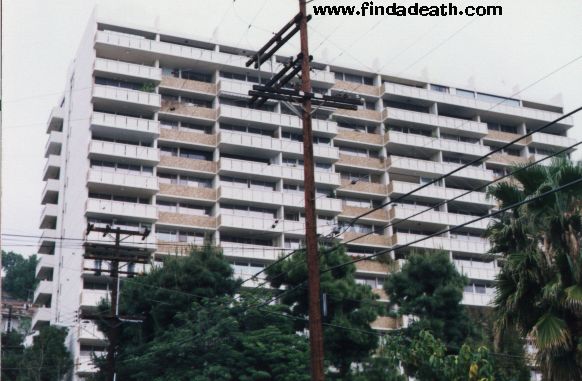 Her apartment was neatly kept, festooned with family pictures and a psychedelic poster which read FRODO PUFFS PIPE WEED.  The actual door to the apartment had a handwritten sign attached to it, reading:

To those of you entering, please give a minutes thought to the vibrations and feelings of which you brought with you.  If they be of sound, sincere, and honest quality, do enter.  On the other hand, be they different from those qualities listed above, do enter for I’ll try to understand, ” signed Lady of the Manor, M. Diane L.

Bit of history:  Some people claim that Diane was no stranger to drugs and that she was into heroin at the age of 14, and mentioned suicide on several occasions.  She also supposedly dropped LSD three or four times a week.  This was published elsewhere, those that knew Diane deny this.

On the evening of the 3rd of October, Diane was on a date at the Griffith Park Observatory with a guy named Robert Rietman, returning home about midnight.  At Diane’s request, friend Robert Durston arrived around 3 a.m., and Diane said she was going to make cookies.  According to Durston, Diane had told him she had dropped LSD.  They talked a lot.  Around what he thought was daybreak, they went out to the balcony.  Diane looked down and saw one of the building attendants named Scottie, walking his St. Bernard.  The leash fell off, and Scottie threw the leash at the dog and gave chase.  Diane became hysterical, convinced that Scottie was going to kill the dog.  Durston drags her inside the apartment and restrains her physically, until she calms down.  Durston leaves the room and calls Diane’s brother to tell him she had dropped acid.

JUNE 2010: Find a Death friend Shannon Kent sends us these terrific images of the interiors.  Shannon explains,
“I just wanted to forward this to you. It appears unit #610 is for sale. According to your article this was Diane Linkletter’s apartment. The apartment is totally remodeled but if you click on the “more photos” there’s a picture of the infamous kitchen window!”

It should be noted that 20 minutes prior to the incident, Diane did make a phone call, and the operator said that Diane sounded like she was under the influence of “something.”  It should also be noted that she was wearing a pair of jeans, a sweater, and was carrying $14.66 in cash, and credit cards (The Broadway of course, and a couple more).

Durston returns to the room, and Diane was more relaxed.  She got up calmly, left the bedroom, 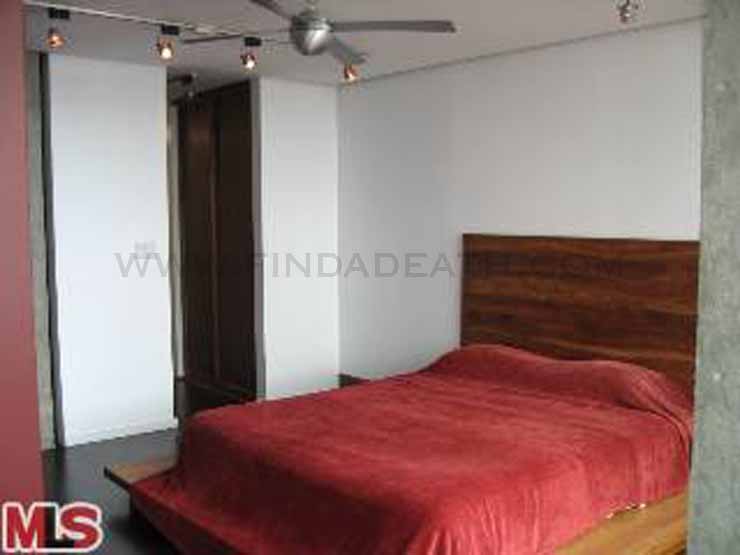 crossed the living room, Durston following her the entire time. 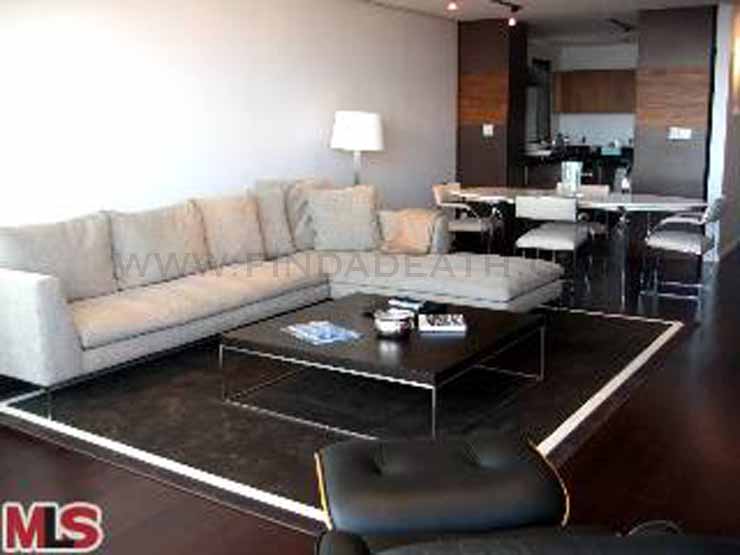 She entered the kitchen, 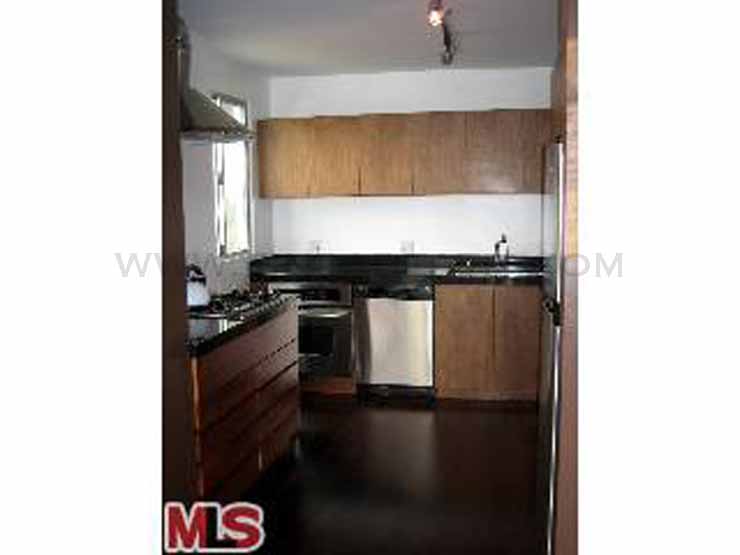 passed the plate with two uneaten cookies, climbed on the yellow tile counter top and proceeded out the kitchen window. 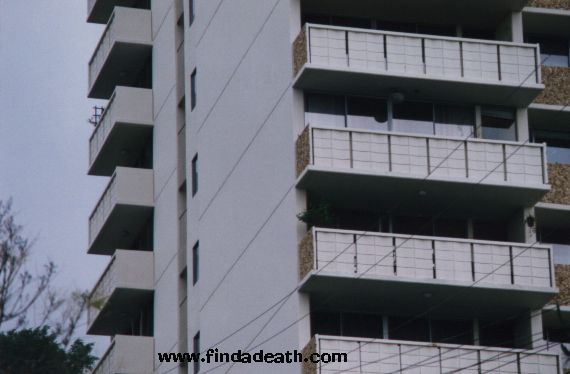 Proceeded.  I find that word fascinating.  It was no spectacular dive, she just walked out the window.  Durston reached for her, but couldn’t stop her.  He got a handful of the beige drapes.  The end.  She died with all her belt loops intact.

A neighbor across the street was looking out his bay window and saw Diane in the air, heard a scream, and watched in horror as she hit the pavement.

Diane was taken by ambulance first to Hollywood Receiving Hospital, then to the USCMC on State Street.  She was pronounced dead on arrival, just two weeks short of her 21st birthday.

Official Cause of Death: Cerebral Contusions, Extensive, Massive Skull Fracture, and Multiple Fractures of Extremities.  Interestingly, Diane has the distinction of being pronounced dead at 10:04 a.m. on 10-4 1969. 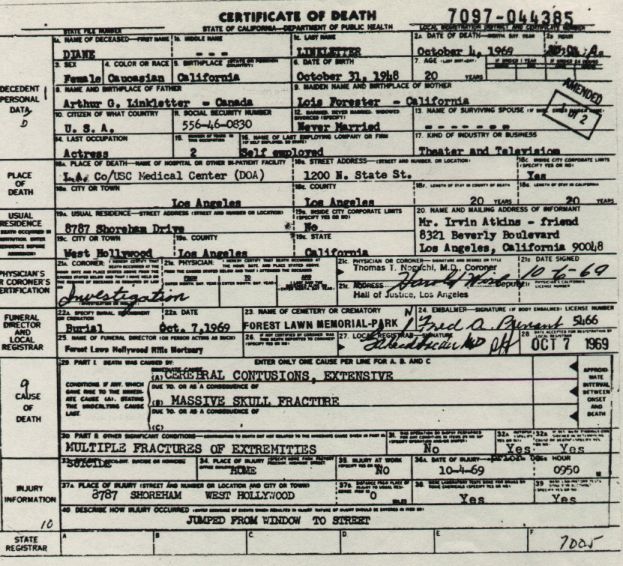 Diane was fast tracked to autopsy at 3 p.m. that very day. (Being a celebrity’s daughter still has its perks.)

Rather than hide from the press, her father went public with an anti-drug campaign.  Art said on that day that Diane had taken “a much stronger dose of this poison than she should have.”  He focused his anger on Timothy Leary, the drug advocate and former educator, but also blamed the companies that manufacture LSD.

JUNE 2010: When the autopsy was released, it was discovered that Diane was completely sober at the time of her death. 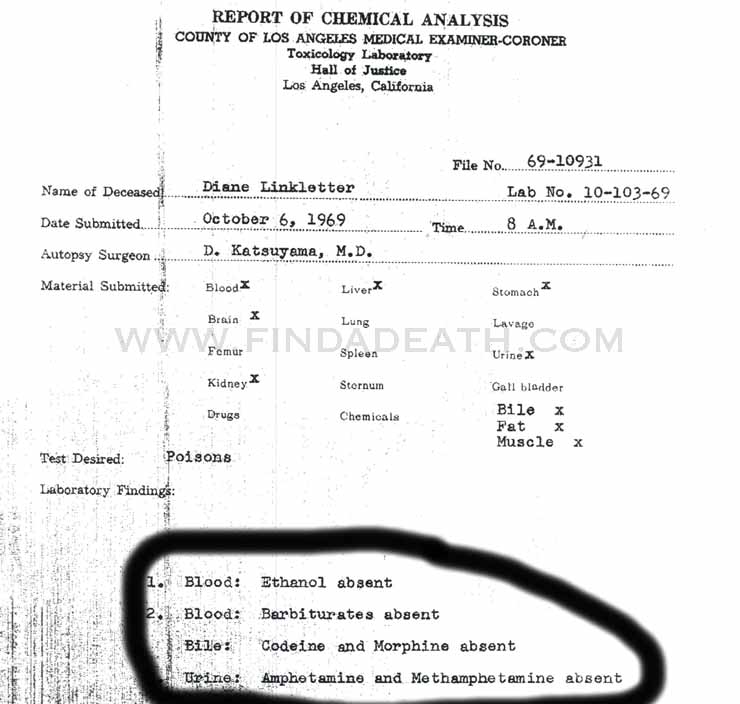 Nothing. No drugs, no booze.  Her father then insisted she was suffering from an LSD flashback.

Her tombstone reads: “Darling, we loved you so much.”

Trivia:  Diane was reading The Story of O at the time of her death.

Find a Death friend Mike Crews reminds us that Art Linkletter made a record titled “We Love You, Call Collect” prior to Diane’s death.  It won the Grammy for best spoken word recording in ’69.  Here is also a fun commercial with Art and Diane.