I don’t set trends. I just find out what they are and exploit them.
Music is the soundtrack of your life.
I’ve never relegated the lip-synch to a lower form of entertainment. Lip-synching is an art unto itself. A lot of people can’t do it.
First job I had, I was 17 years old. I was primarily the mail room boy at the radio station. An FM station. And in those days, nobody listened to FM.
I have accomplished my childhood dream: to be in show business. Everybody should be so lucky to have their dreams come true. I’ve been truly blessed.
Now that we’ve got computers, you can pump up anything that anybody ever uttered.
I could never turn to a guy and a girl and ask, ‘Are you going steady?’ That was absolutely a no-no – it was the Eisenhower period, and no parent wanted their kid going steady, so it wasn’t a thing that you could endorse as proper behavior on the air.
I was roundly criticized for being in and around rock & roll music at its inception. It was the devil’s music: it would make your teeth fall out and your hair turn blue, whatever the hell. You get through that.
My father said to me at one time, ‘If you are still a disc jockey by the time you are 30, you better find another line of work.’ Little does he realize, I am in my 70s, and I still do seven or eight hours of radio every day – or every week.
I love what I do. I love the invigoration of doing things I haven’t done before.
Show More Quotes
Show less

He was often accused of taking the talent from black acts and assigning them to white performers to appease the record buying public.  Not a particularly unusual trend back then.

I was working as a Production Assistant (PA) for Steve Allen in the valley in the early 80s. Now Steve Allen had loads of old vintage black and white reels of live television with performances of everyone from Doris Day to Jerry Lee Lewis – pretty much anyone from the golden era of television and rock and roll. At the same time the studios, particularly NBC saw the value of pulling old reels together and creating compilation shows. They were cheap and could be produced fairly quickly (think Bob Saget and America’s Funniest Home Videos). Naturally Dick Clark (through Dick Clark Productions) wasn’t one to run from a quick buck and as Steverino’s PA I was charged with researching, transferring and contracting for Clark’s Bloopers and Bleepersseries.

Now keep in mind a Steve clip goes for about $3,000 a minute plus residuals. And Steve has hundreds of live outtakes that didn’t go exactly smoothly.

So one day a get a call at Meadowlane Enterprises (named after his wife, Jayne Meadows) from the then Executive Producer of Bloopers and Bleepers. His offer was that Dick Clark Productions will purchase the entire Steve Allen film and video catalog for $5,000. If we chose to turn down this offer DCP would never allow his clips to be seen. When I said that Allen’s clips are shown on all three networks as well as in Canada, his response was Meadowlane would not be able to market to the other studios…period. When I stated that I would have Mr. Allen call Mr. Clark, the Executive Producer calmly stated that that would not be necessary as this came directly from Dick Clark.

And since that day, you probably haven’t seen but maybe one or two clips from all of the Steve Allen variety shows – and those were on basic cable.

Dick Clark never cared about music or entertainment. All that dick cared about was absolute control.  – name withheld

We do know for a fact that Dick’s artists were routinely ignored at The Grammy Awards, so Dick invented The American Music Awards.

He lived for decades in this house in Encino, CA.  Shortly before he died it was made aware that Dick owned the coolest Flintstone’s style home in Malibu for 3.5.  YES please. 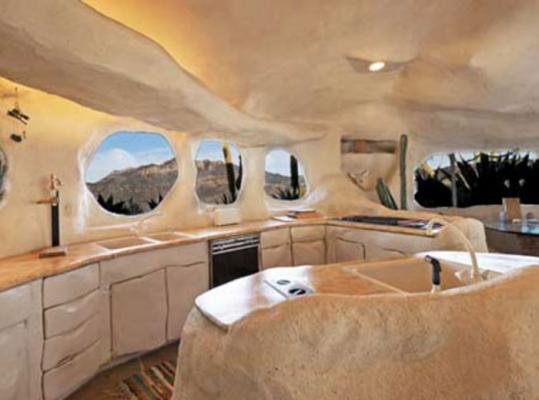 In 2004, Clark suffered a stroke that left him paralyzed.

“Well, I’m using a cane, so what? So what if they shot me sitting in a wheelchair? That’s life!”

On Wednesday the 18th he died of a massive heart attack at St. John’s Hospital, Los Angeles. 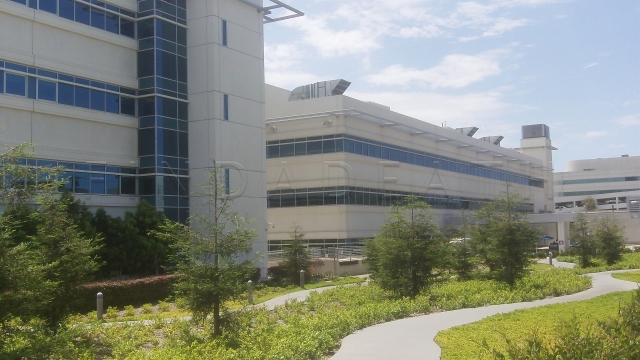 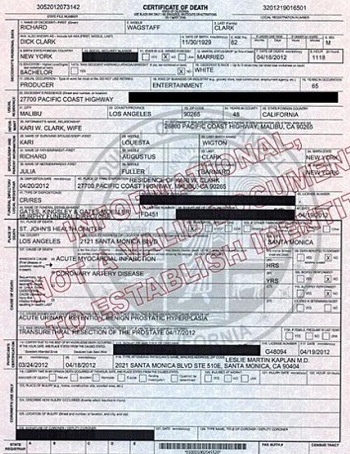 The memorials began.  A cool sign was put up at The Roxy on the Sunset Strip. 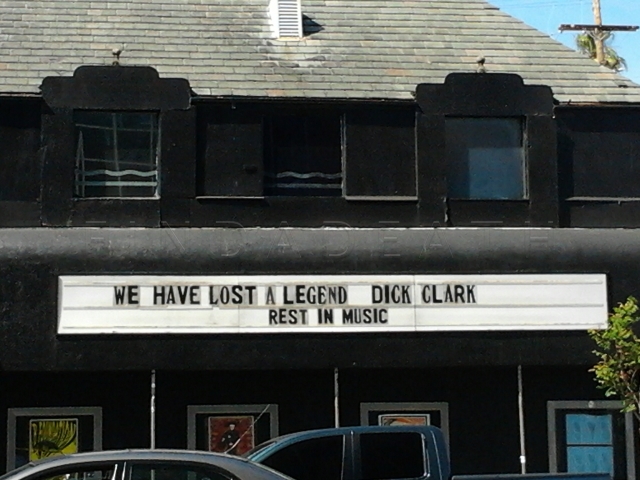 The Hollywood Chamber of Commerce jumped into action and went nuts with the shitty glitter on his star. 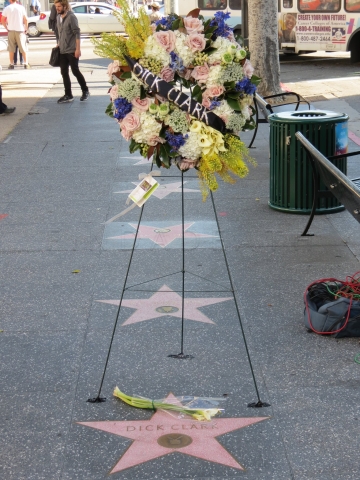 A really sweet gathering of former American Bandstand dancers shows up and did a little tribute to Dick. 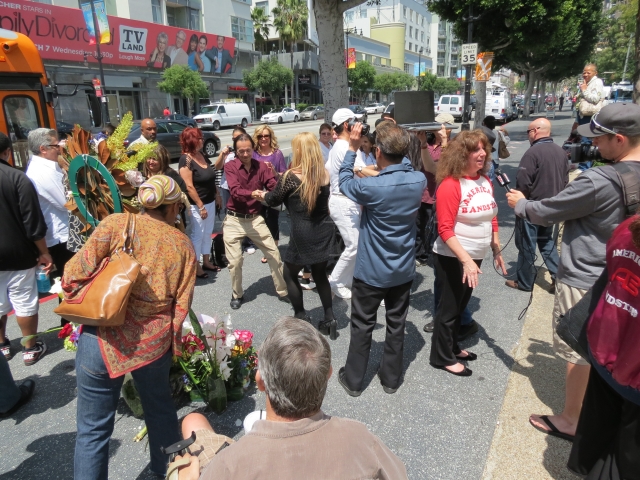 His body was cremated and we wait for news about a memorial service and permanent residence to be announced.

Mark Langlois adds:  Dick Clark was cremated and Entertainment Tonight reported the cremains were to be scattered at sea.
300 guests were invited (by phone) to attend a celebratory memorial service on the grounds of Clark’s ocean-side Malibu estate on Thursday, May 3rd. Attendees included Pat Sajak, Stevie Wonder, Lionel Richie, Chubby Checker, Bob Eubanks, Jerry Weintraub, Gene Simmons and Paul Stanley, Debbie Gibson, Marie Osmond, Reba McEntire, Berry Gordy and Larry King. Clark’s three children spoke about what Dick was like as a dad. They were followed by Clark’s widow Kari, who read a list of “65 reasons I love Dick Clark”, composed for his 65th birthday. Eulogies by King, McEntire and Osmond followed as well as performances by David Foster and Paul Anka, singing “Put Your Head on My Shoulder”, and Stevie Wonder, who delivered a few measures of the American Bandstand theme.

In September 2012, Dick Clark Productions was acquired by Guggenheim, a private Wall Street firm, which teamed up with a pair of multimedia investors to buy the production company for an undisclosed sum. A person briefed on the matter told the press that the deal was worth about $370 million, more than double its $175M sale price from 2007 when it was acquired by Washington Redskins owner Daniel M. Snyder and Six Flags Entertainment.

Thank you, Brian Donnelly, for the great pictures and the many friends of Find a Death for information.