Dottie had been through the ringer, starting with a father that sexually abused her. Growing up, her family was so poor, they ate their meals off lard bucket lids instead of plates, and drank out of old tin cans. Poor Dottie.

Dottie was a close friend of Patsy Cline. In fact, Patsy was only 34 days older than Dottie, and they shared the billing of Patsy’s final concert. Dottie’s last words to Patsy were, “Patsy, I’m really worried about you flying in this weather,” to which Patsy replied, “Don’t worry about me Hoss, when it’s my time to go, it’s my time to go.” Guess whose time it was to go?

Findadeath friend Julie sends this: Forgot to mention this, but Dottie West offered Patsy Cline a ride back to Nashville.  Since Patsy was in a hurry to get home to her kids — and she thought the plane would be faster — she turned Dottie down.  Unfortunately, we all know how both their stories ended, Patsy in a horrible plane crash and ironically, Dottie in a car crash.

Dottie was probably most famous for her “Country Sunshine” song, that was used in a Coke commercial. I’ve been listening to an “Essential Dottie West” CD lately and honestly, Dot just wasn’t that good. Not terrible, just Not That Good. Poor Dottie.

In 1984, she was in the film, “Aurora Encounter.” It was some flick about a youth with an ageing disease and space aliens.

Update – October 99: Findadeath friend Denise Duvall was kind enough to share a copy of Dottie’s cinematic triumph with me. Agony. Dottie is only in it for about 20 minutes, but a rare film appearance by Spanky McFarland makes up for Dottie’s absence. That, and the MOST awful child actors known to man, one being a poor kid with that ageing disease that makes him look a hundred years old. He gets cast as a, get this, a Martian! How do they come up with this?! Oh yeah, and Jack Elam playing the ugliest (in fairness, he couldn’t help that) alcoholic in the world. Thanks Denise!

Clarification from Findadeath.com friend Mark from FL: I immediately was excited to see it and brought up my blockbuster account only to find I was disappointed as I learned it was  the Little Rascals Spanky and not my preteen heart-pounder Spanky from such 60’s pop hits as “Sunday will Never be the Same.”  Thanks for the point, Mark.

Some of Dottie’s other spectacular achievements include The Love Boat (wow.),Family Feud (she was a natural), and Hee-Haw. To top it all off, she had her own float in the “Macy’s Thanksgiving Day Parade!” No limits.

With her earnings from the float, Dottie bought a house in Williamson County, at 4606 Shy’s Hill Road, in Nashville. 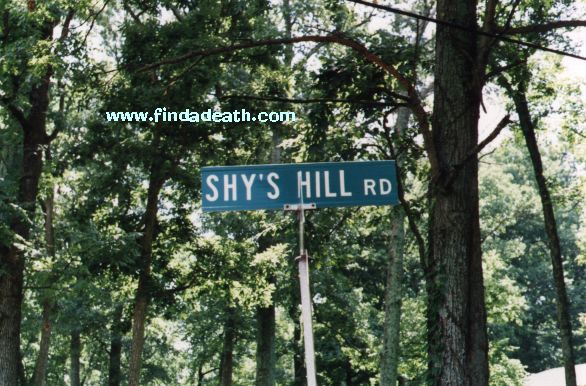 Here’s the best shot I could get of the house. 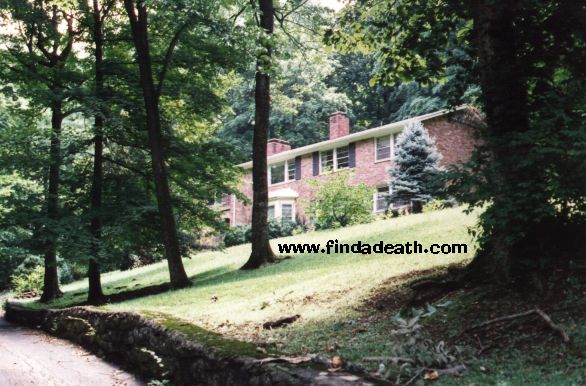 Oh and here’s a photo of her mailbox, where her Love Boat fan mail would arrive. 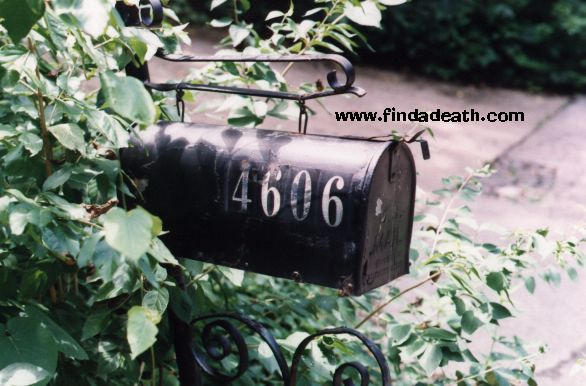 So impressive was this house, she was asked to be on The Lifestyles of the Rich and Famous. I must read you an excerpt from her unauthorized biography:

“Dottie, attired in a dress reminiscent of the Old South (erm…), and husband Alan Winters posed on an upstairs balcony with the rolling Middle Tennessee hills as the backdrop. The couple snuggled in a white lacy hammock on the lush green lawn, as the cameras rolled. Also for the cameras, Dottie glided down the ornate staircase of the entrance hallway of her four level home and sent the pins flying in the bowling alley in her basement.” Class.

In August of 1990, Dottie invited Entertainment Tonight to her home, to announce that she was broke. The IRS wanted $1.3 million, and Dottie didn’t have it. A bank bought the mansion and evicted Poor Dottie. One of the bad investments she made on the advice of her manager was, and I swear this is true, tuna boats. Imagine Dottie’s surprise when she found out that the boats were never evenbuilt.

Updated Sept. 1999: a huge thank you to Findadeath.com friend Mark Crawford for these next photographs. Mark lives IN the Wessex, and was kind enough to send these in for us to enjoy. Cheers, Mark!

on Brookmont Terrace, in Nashville. 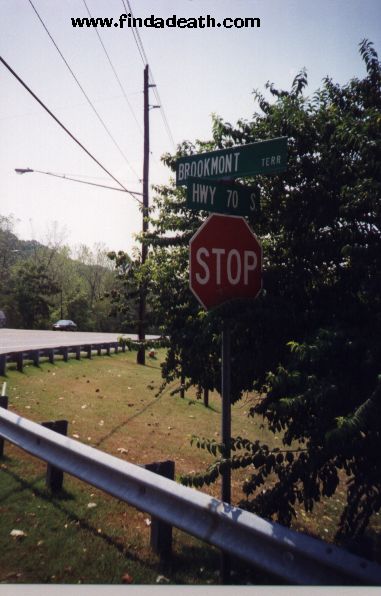 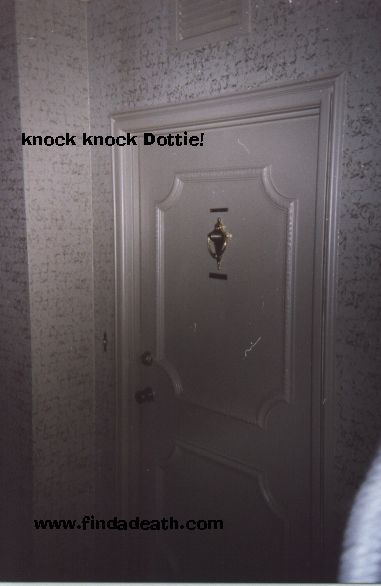 Her car was repossessed, and good buddy Kenny Rogers (of large breast fame) gave her his old car. No doubt she parked it back here. 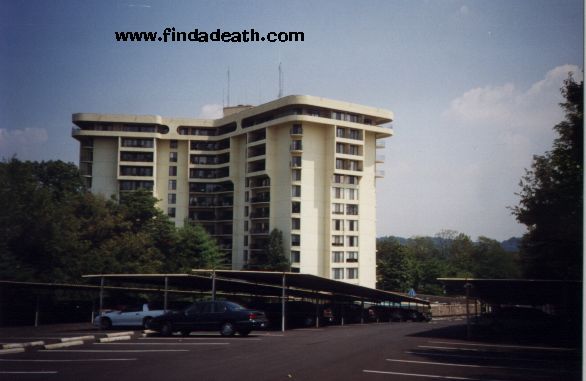 On the last night of her life, she drove out these gates, 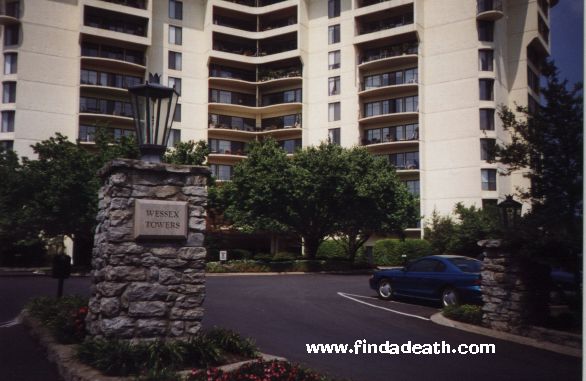 and down this road, 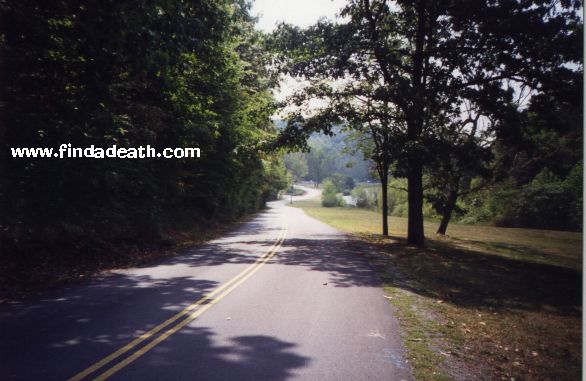 expecting to perform at the Grand Ol Opry. Sorry, I’m getting ahead of myself.

In March of 1991, there was an investigation that Dottie had hidden her valuables to avoid them being confiscated. They busted her, and sold everything in an auction open to the public during fan week in Nashville. That’s the big tourist weekend of the year there. Poor Dottie. So then, She shows up at the auction, and then, She. Bids. On. Her. Own. Stuff. Some fans bid on some of her expensive doll collection, and upon winning them, gave them back to her. Now if I were Dottie, well, it wouldnot have been pretty. “What is THIS? I need cash and a good car, not a doll!” Not to take away from the generosity of the fans.  Poor Dottie.

About six months before she died, Dottie told a minister, “I always wanted to dance with the angels and sing with an angel band.” Guess what. At last God smiled upon Dottie. Here’s the dirt:

On August 30, 1991, Dottie left her condo to perform at the Grand Ol Opry, and Kenny Rogers’ old beat up charity hand me down car wouldn’t start. 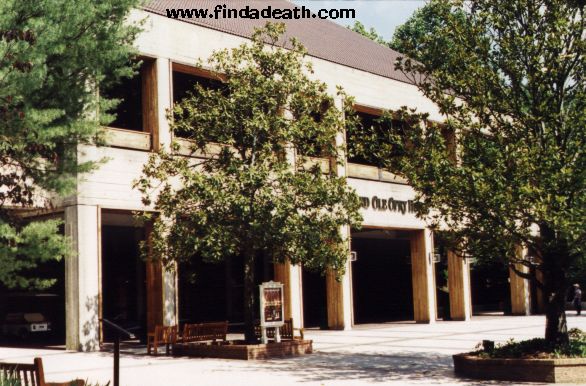 Okay, it was only 3 years old. Dottie’s 81 year old neighbor George Thickson helped her to get it going. On her way to the gig, the car stalled in front of the oldBelle Mead Theater on Harding Road. 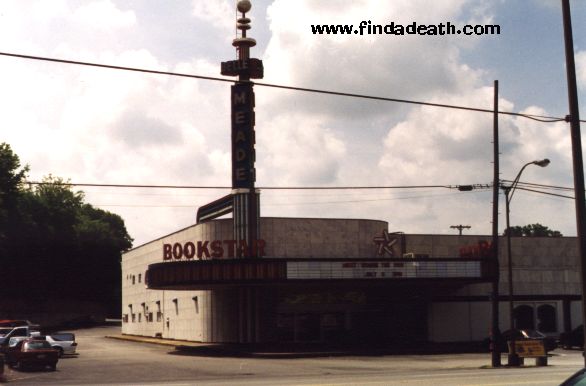 Dottie, wearing her stage costume, flagged down a passing car to mooch a ride. Thanks a lot, Kenny. A car finally stopped, and guess who the driver was? No, not Kenny, but George, the 81 year old guy! So George punches it to get her to the show, and takes the Briley Parkway to the Opryland exit. 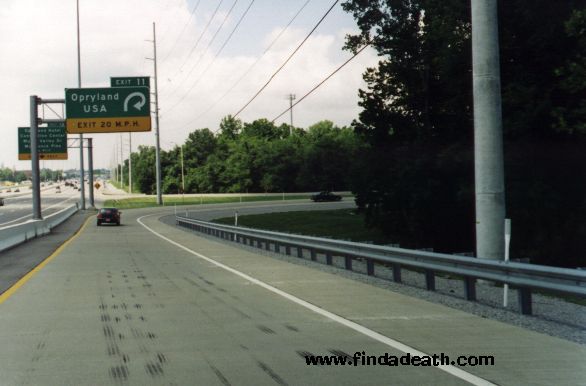 At 8:11pm (she was due onstage at 8:30), George loses control on the exit and the 1982 Plymouth Reliant he was driving sailed through the air for SEVENTY-NINE POINT SEVENTY-FIVE FEET and hit the embankment! 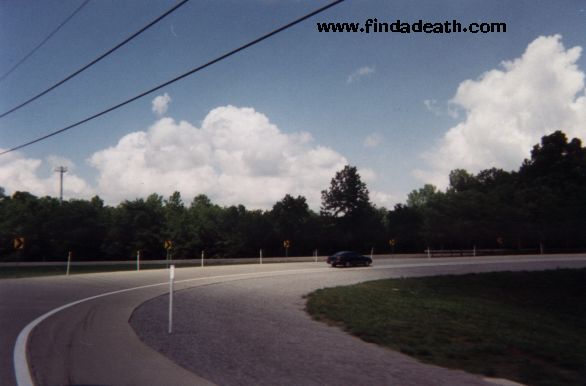 Pretty awesome, innit? They were taken to the Emergency Room of Vanderbilt Medical Center, in Nashville. 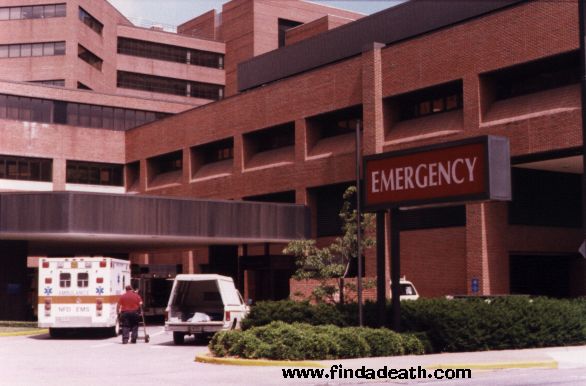 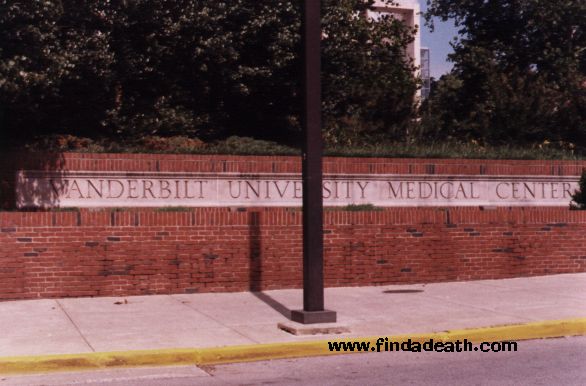 Dottie’s liver was pretty well sliced and diced. She received 35 units of blood and had two operations. Just before the third surgery, Kenny Rogers showed up and promised her they would record a song together. Again, Kenny is glad it wasn’t me, coz I would have been in his face. “Excuse me, we might have done this before.  Dick.” But then again, that’s me. Anyway, Kenny lucked out, because Dottie bit it on the operating table at 9:43am. Heart failure. She was 58. 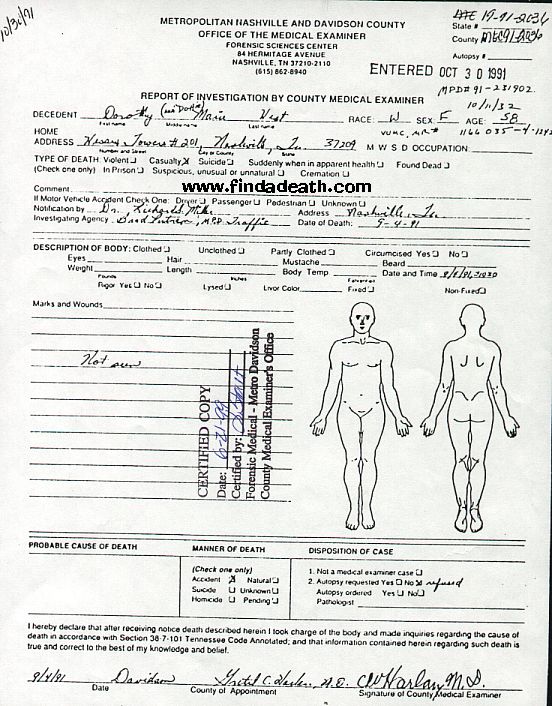 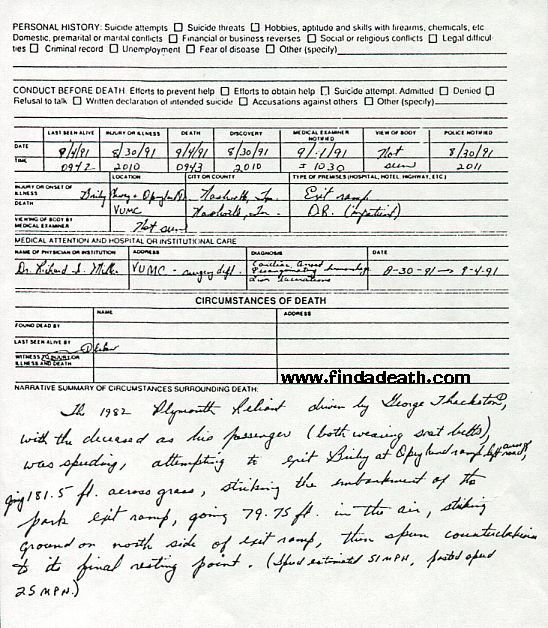 So, she actually died an “exit ramp girl.”

Dottie was laid out in Nashville’s Woodlawn Cemetery. 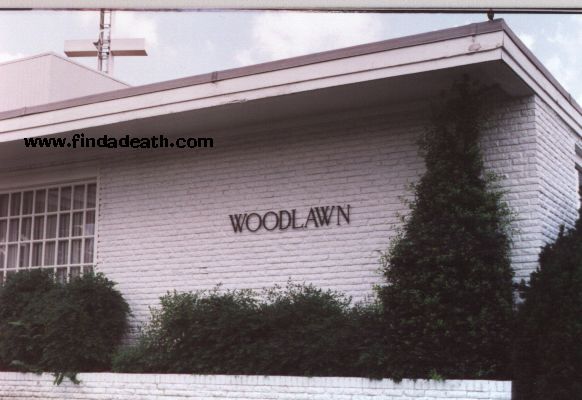 Floral arrangements were received from virtually every country music star. The local paper wrote, “Because of Dottie West’s death, the country sunshine is not so bright today.” Poor Dottie.

Another big thank you to Findadeath.com friends “His and Hearse” for these next snaps. Hundreds of mourners jammed Christ Church, on Old Hickory Boulevard in Nashville. (Same church Reba’s band had their memorial.) 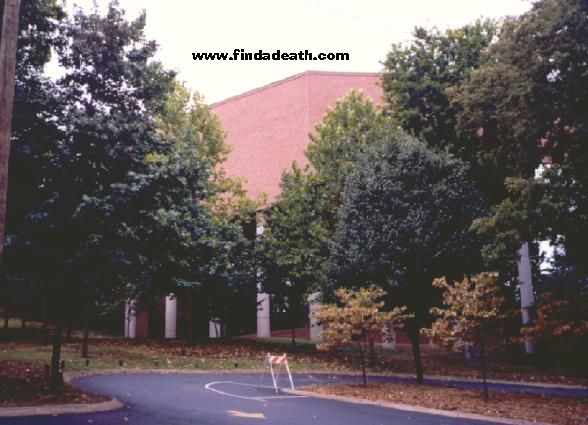 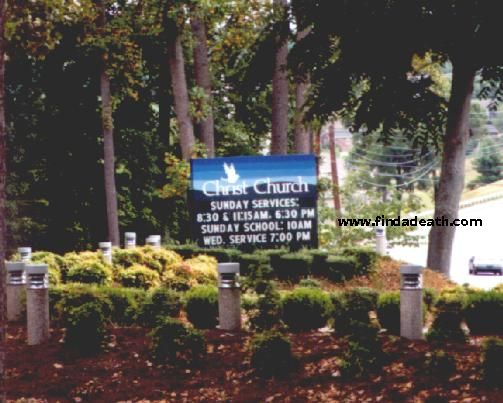 I think the actual service was held in this chapel. 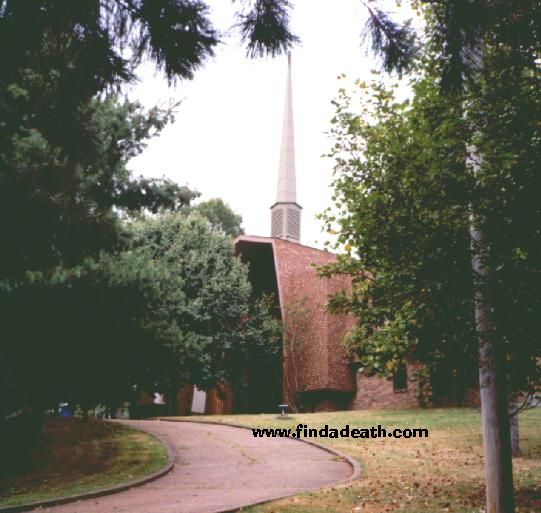 The funeral procession left Nashville and returned to Dottie’s hometown of McMinnville for burial in Mount View Cemetery.

I wish I had a photo of this, but on July 13, 1993, highway 56, from the McMinnville city limits to Dekalb County, is now Dottie West Memorial Highway. They even have a Dottie West festival in her hometown every year, where they gather around and watch old episodes of Family Feud. Ok, I made that last bit up.

You wanna know something funny? Every time I listened to Dottie while I was away, I ended up on an exit ramp. I swear it’s true. Coincidence? If you like real tragic hardcore country music, I strongly suggest “The Essential Dottie West.”  Get it get it get it.

In all honesty, like I said, she isn’t that good, but this is a really good CD. Especially the one with the tone deaf 4-year-old singing about his father leaving, and Dottie egging him on, nothing short of abuse:

Dottie continues:
Now sweetheart you must forget cause he doesn’t love you like before
But knowin’ that he doesn’t care just makes mommy love you more
So come on now and lets be big and strong and please please don’t cry
Cause he doesn’t deserve your tears
Cause when he left he didn’t even say you goodbye
(Please mommy can I still…

Trivia: Here are her hand prints, outside the Grand Ol Opry. 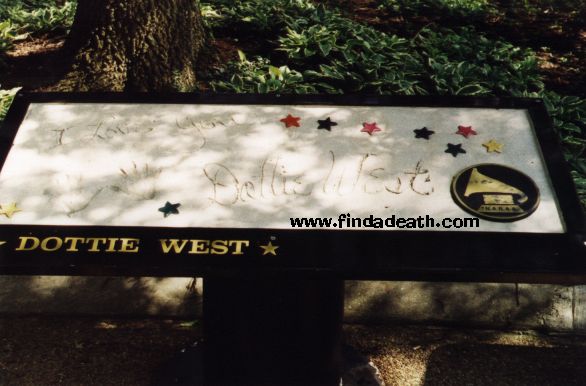 A big huge thank you to Findadeath.com friend Tami Dingle for helping me to gather facts for this story.

This just in, January 2004, from Findadeath friend David Barr: I do want to point out one thing that you may want to add as an addendum to the site. You have posted a link to a photo of Dottie’s hand prints which was on display in the plaza area outside of the New Grand Ole Opry House. Unfortunately, Opryland Theme Park closed down in 1997 or 1998. The plaques were removed from the Opry Plaza due to construction of Opry Mills Mall, which took up all of the Parks parking lot and most of the Opryland USA Theme park. The location of the displays are unknown by me. There were other displays: Vince Gill, Hank Williams, Jr., Emily Lou Harris, just to name a few.

Trivia: Findadeath.com friend Matt sends this: Thought you’d like to see these photos from the 1985 Oui Magazine issue that Dottie posed in – such a scandal then in Nashville. She was in her 50’s when these were done and it was a big “NO MA’AM” to do in conservative Nashville /Country Music. If I’m not mistaken Dottie is still the only female country singer to date to have posed in such a magazine’s centerfold. Thanks Matt! HAWT! I’ve added one of those pictures to the top of this page, and here are two more. 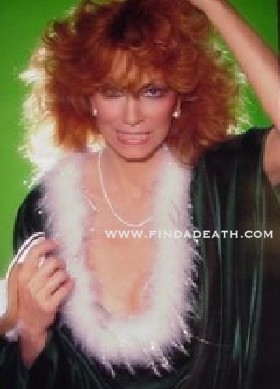 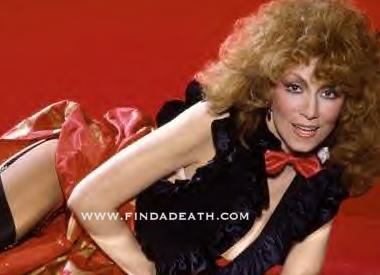