And you can bet your last money, it’s all gonna be a stone gas, honey!
I’m Don Cornelius, and as always in parting, we wish you love, peace and soul!
I always felt a love for music, but I never got my nerve up enough to try a musical instrument in school.
Nobody really invents anything that hasn’t been done before.
Black music is too big and too powerful not to have its own awards show.
The ‘Soul Train’ legacy and brand are of the utmost importance to me and to ‘Soul Train’s’ millions of fans. After years of offers, I feel the time is now finally right to pass the torch.
The ’70s and ’80s were just the period during which the best soul music was created and the best records were done.
I felt that it was my mission to see to it that black talent had an opportunity to get national television exposure.
MTV essentially killed ‘American Bandstand’ and ‘Solid Gold,’ because music videos are an easier way for pop artists to gain television exposure.
When you come up with a good idea, you don’t have to do a whole lot. The idea does it for you.
When I have a job to do, time means nothing. I lose patience with people who work on a clock.
Show More Quotes
Show less

Donald Cortez Cornelius was born in Chicago – September 27, 1936 and grew up in the South-Side Bronzeville neighborhood. An aspiring cartoonist, he served as a Marine in Korea and eventually worked as a Chicago policeman to support his wife and two sons. In 1966, at age 30, Cornelius decided on new creative career. He took some broadcasting classes and soon was working on local radio shows and hosting Chicago “record hops”. Cornelius discovered he had “a burning desire to see black people depicted on television in a positive light.”

In 1969, inspired by the niche-market dance shows (like the pre-teen hit “Kiddie-a-Go-Go”) that did well on local stations, he sold his own black-centric dance show called “Soul Train” to WCIU-TV (Chicago UHF channel 26) with SEARS as a sponsor. The daily show was a smash and brought together local acts and the best dancers gathered from South-Side clubs like BUDLAND at 64th and Cottage Grove. Cornelius’s right hand man was Clinton Ghent, who would later take over as host of the local version (airing in black & white) when Cornelius left for California.

The Chicago hometown version of Soul Train aired every weekday until July 1979 with over 1000 episodes produced – and almost none saved on tape.

I think every major city hair their homespun version of Soul Train.  In Detroit we had The Scene.  On WJLB we had Electrifying Mojo who turned me onto a whole different type of music, different from Elton John and Kiki Dee.  One of my first 45’s was Tear the Roof Off the Sucker by Parliament.  This was back when I thought city buses automatically came with opaque puffs of pomade on the windows, and classrooms came with afro-picks already stuck in the ceiling.

I remember one time – and this is unrelated but related – I was probably 12 and at summer camp.  I was combing my hair in the mirror.  My sister was a beautician and taught me to put hairspray on my brush to keep my hair from going crazy.  I didn’t have any hairspray and the black kid next to me was using Afro-sheen.  I didn’t even know what it was, or that an afro was called an afro, but I asked if I could borrow the product to use in my hair.  “You gettin’ an afro?” asked the kid.  “I’m thinking about it.” said I.  hahaha.

In 1971, Soul Train was nationally syndicated and the production moved to Los Angeles with Johnson Products Company (makers of Afro-Sheen) (see?) as the new main sponsor. On the morning of Saturday October 2, 1971, Soul Train debuted in its weekly syndicated form. The first show featured Aretha Franklin, Eddie Kendricks and The Honey Cone. The taping schedule was Saturdays and Sundays with 2 shows taped each day – and a box lunch of Kentucky Fried Chicken for the dancers provided by the show. The camera savvy regular dancers often brought a change of clothes for 4 shows. It was taped in its first decade at Metromedia Studios (corner of Sunset and Van Ness – now the site of a high school) and later taped at Paramount Studios. All acts booked to sing on the show would lip-synch their songs.

It was fascinating to watch people dance, completely uninhibited, some literally shoving others out of the way to grab the camera/spotlight.  See the woman in the background in red at :45.

It always makes me smile when I see people dancing to YMCA at weddings/events.  This song is about gay men having sex in the YMCA.  White Lines is about cocaine.  Every Breath You Take is a sinister song and if you actually do the Le Freak, you would probably be kicked out of whatever event you were attending, as it is (by 70’s standards) pretty vulgar.  There is a couple doing Le Freak in the background at 2:21

Actually, I’m sure one or two of those men knew completely what YMCA was all about.

As creator, owner, producer and host of Soul Train (“the hippest trip in America” ) – Don Cornelius became very famous and very wealthy. Dick Clark noticed how successful Soul Train had become and soon tried to rip them off with his own show “Soul Unlimited”. The Dick found that black talent and audiences were extremely loyal to the original and his version soon flopped.

In 1982, Cornelius had an extensive (21-hour long) operation to fix malformed blood vessels in his brain – a congenital deformity. After recovery, he continued to host the show for another 10 years then decided to allow guest-hosts to take over. Cornelius was never a fan of hip-hop but eventually realized the genre was becoming a fixture and younger hosts like Jamie Fox, Tyra Banks, Ari Spears and Shemar Moore would be better to take the reins. Though he was now off-camera, Cornelius was always on the sidelines watching, producing, writing, or telling a rowdy audience member to shut up.

Soul Train became the longest running syndicated show in TV history – lasting from 1971 to 2006. Its 35 year record-holding reign will only be broken if Entertainment Tonight lasts until 2016 or Wheel of Fortune lasts until 2018.

In his final years, Cornelius went through a bitter divorce with his second wife, Viktoria Chapman – a Russian model he married in 2001. He pleaded “no contest” to her 2008 domestic violence charge during their divorce proceedings. He was also experiencing intense headaches, depression and anxiety. Cornelius allowed his son Tony to make more business decisions and would make comments about “not really being around much longer.”  Cornelius retreated to his 3 bed/5 bath $1.5 million dollar home hidden behind massive gates in the hills off Mulholland Drive. He sold the show for an undisclosed sum to MadVision Entertainment in 2008 – and they quickly began marketing and selling classic Soul Train show DVDs. 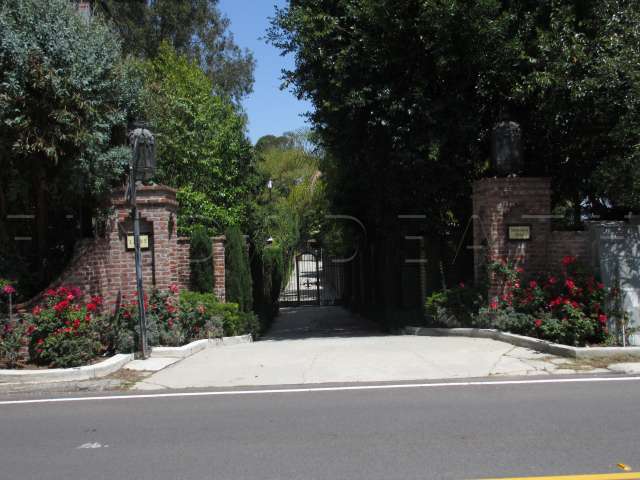 On February 1st 2012, Cornelius called his son Tony in the middle of the night. He was in extreme pain and told him, “I don’t know how long I can take this”. Tony said he’d be over and Don said he’d leave the back door open. He rushed to his father’s nearby home on Mulholland Drive, entered a smoke-filled room, and found Don sitting in a chair with a pistol in his right hand, unresponsive.  Don had raised the gun to his right temple and blew a hole clean through his head.  There was no note. 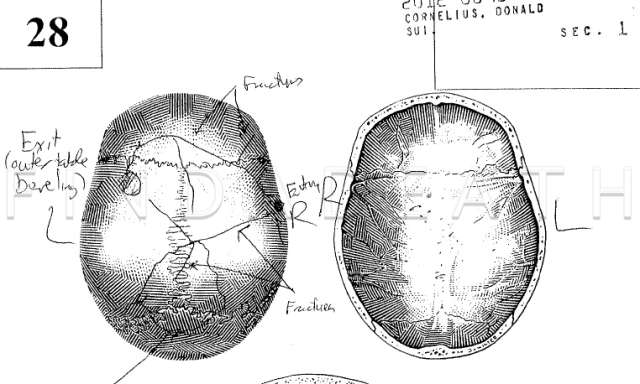 Don Cornelius was taken to Cedars Sinai Medical Center where, at 4:46am, he was pronounced dead of a self-inflicted gunshot wound to the head. Soul Train’s beloved conductor was dead at age 75.

Cornelius died 10 days before Whitney Houston was found dead in a hotel bathroom the night before the Grammy Awards. (“It may shape up to be the Worst Black History Month ever” said one blogger). The Grammy Awards turned into an obsessive tribute to Houston but Cornelius’s name wasn’t even listed in a montage of people who had died in the last year. 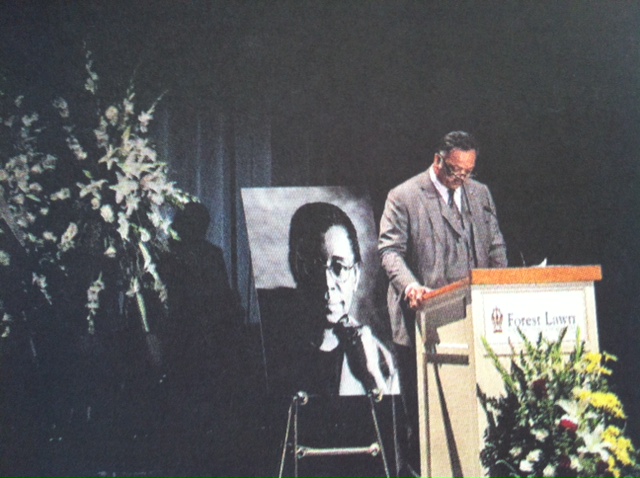 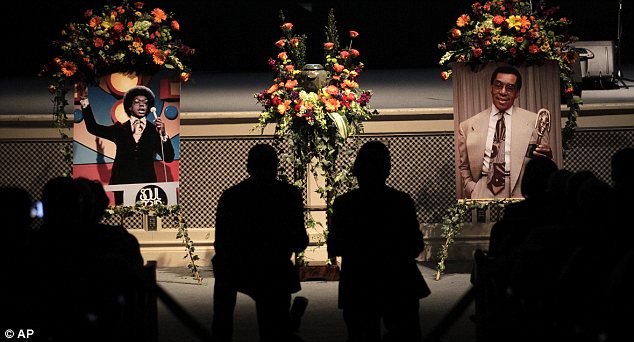 Attendees included Barry White’s widow, Glodean White and family, Smokey Robinson, Cedric the Entertainer, Jody Watley, and Magic Johnson. Stevie Wonder sang “Love’s in Need of Love”.  If I had a daughter, I would name her Glodean.

His 14-year-old granddaughter, Christina Cornelius gave a moving tribute where she talked about him being “Just my grandpa. My smooth-voiced, loving grandpa”, as she broke down in tears. She recalled spending time with her grandfather watching “Dancing With the Stars” and “American Idol” together and him teaching her dances like the Mashed Potato.

Rev. Jesse L. Jackson, Sr. spoke about how this trailblazing producer and program brought joy, pride, talent, hope and opportunity to the black community. Mr. Jackson told the crowd, “He gave people a chance to feel good about themselves.” Jackson urged people not to judge Cornelius for taking his life. “We reveal our successes to the world but we conceal our pain” , said the Reverend.

An autopsy later confirmed, what his son had told the press, that Cornelius had been in extreme pain. Pathology revealed that he had been suffering brain seizures for the last 15 years of his life.

Here’s something interesting:  In June 2012, 4 months after his funeral, Don’s cremains were still at Forest Lawn.  The bill hadn’t been paid. So the funeral was held, but the cemetery kept possession of Don until June, when Don’s nephew petitioned for the urn, or, just the cremains.  The urn didn’t necessarily come with the package.

In his lifetime Don Cornelius was honored with a Hollywood Walk of Fame star & many broadcasting awards, and after his death – a Times Square flashmob of former dancers and fans did a huge “Soul Train line” and The Bus Stop in his memory. 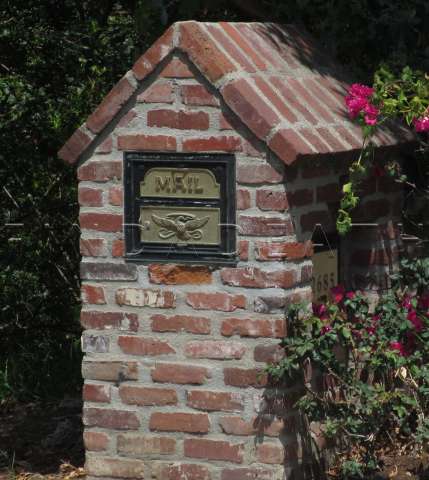 By Mark Langlois, with a special thank you to Lisa Burks and CH.

One thought on “Don Cornelius”