My sexuality has never been a problem to me but I think it has been for other people.
It’s marvellous to be popular, but foolish to think it will last.
I have tried sex with both men and women. I found I liked it.
I find it an effort to keep up appearances.
Somehow I took whatever criticism there was very much to heart.
I wouldn’t know how to handle serenity if somebody handed it to me on a plate.
Sometimes you have to let people down in order to get on, particularly in showbusiness.
I was a nothing kid. Not particularly good. Not particularly bad.
A lot of people say I’m bent, and I’ve heard it so many times that I’ve almost learned to accept it.
I just decided I wanted to become someone else… So I became someone else.
Show More Quotes
Show less

Dusty’s real name was Mary O’Brien. We liked the name Dusty better, and Dusty with a beehive and a pound of mascara was the best. Do you ever wish you could stop time?  Man, she was IT.

In 1994, she underwent surgery for a lump found in her breast. She recuperated after receiving months of chemo and radiotherapy, and everyone had hoped she licked the cancer. Unfortunately, in early 1998 it returned. Dusty succumbed to the disease on Tuesday the second of March 1999, at 10:30pm. She was 59 years old. 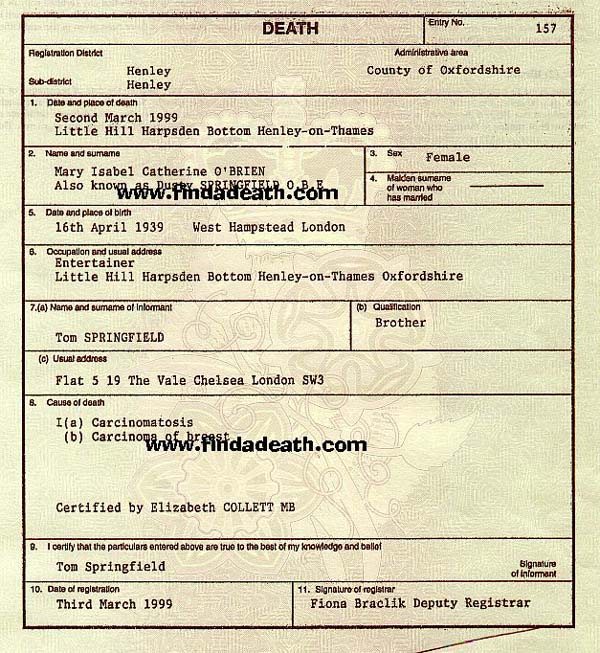 Notice the informant, her brother Tom Springfield.  Findadeath.com friend Russ sent this in: Dusty & her brother recorded together as “The Springfields” prior to Dusty finding solo success.  They even had a hit in the U.S. with “Silver Threads and Golden Needles”.  Check it out.

Ironically, Dusty was due to receive an OBE from the Queen on the day she died. OBE stands for “Order of the British Empire,” and is given to people who have made an outstanding contribution to Britain. The Queen made a concession because Dusty’s health had deteriorated. Dusty’s manager went to St. James’s Palace in London to pick up the award so Dusty could enjoy it for the last few weeks of her life. The funny bit is that her manager carried the award back to Dusty in a bag from a local department store, leaving Dusty to quip, “What would the Queen think about an OBE being presented in a plastic shopping bag?!”

The Queen was “saddened” by her death. She always is.

Knowing full well what was happening to her, Dusty reportedly told a friend to: “Get things organized. I want to go out with a bit of style.” That she did. 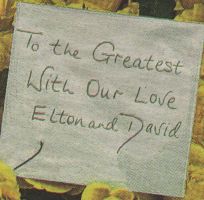 The Rolling Stones, Cilla Black, and Paul McCartney. Dusty’s former backup singer Simon Bell sang, “The Wind Beneath My Wings.”  Lulu spoke, “She had tremendous courage and she bared her soul to the whole world.”

As her coffin was taken from the church for cremation, “You Don’t Have To Say You Love Me” was being played on the speakers. Bunches of white daisies were tied to the railings outside the church, and the horse drawn hearse 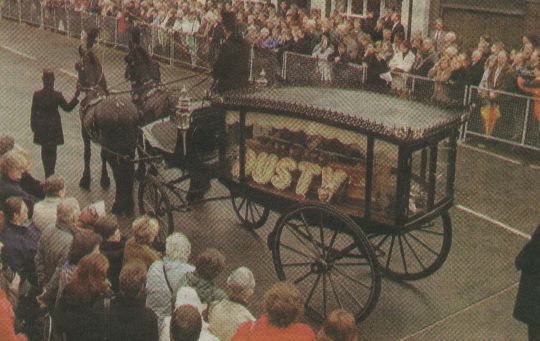 was lined with pink and white floral letters spelling out her name.

Dusty was cremated (don’t say it) and was scattered somewhere over Ireland.

Two weeks after she died, Dusty was honored in the Rock and Roll Hall of Fame. Elton John, Dusty’s former manager, and “close friend” Vickie Wickham accepted the award on Dusty’s behalf. 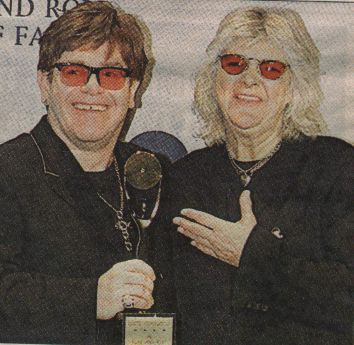 One thought on “Dusty Springfield”