Now there are three steps to heaven
Just listen and you will plainly see
And as life travels on and things do go wrong
Just follow steps one, two and three

Eddie was extremely popular in The UK. In fact, more popular there, than in his native US. In early 1960, Eddie went on a five week tour of England which due to it’s success was extended to fifteen weeks. Despite the fame and adulation accorded to him in The UK, Eddie was feeling homesick and decided to return home for Easter. On 16th April 1960, he did what was supposed to be the last gig of the tour at The Hippodrome Theatre, Bristol. It was in fact, the last one of his short life. After the show, Eddie, his girlfriend, Sharon Sheeley and Gene Vincent all jumped in a limo and headed off to London from where they were due to fly back to The US. This being pre motorway (freeway) days, traveling by car from Bristol to London involved driving through many towns and villages. It was one of these small towns, Chippenham, 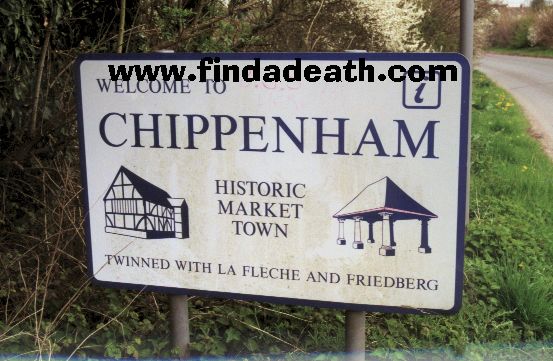 that Eddie met his fate. In the early hours of the morning of the 17th, the car came up this road, 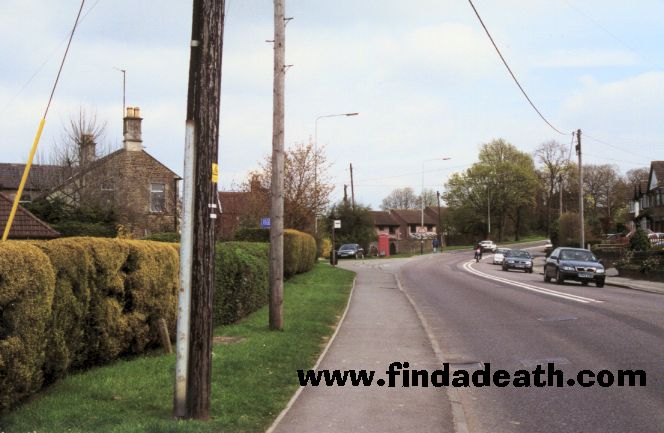 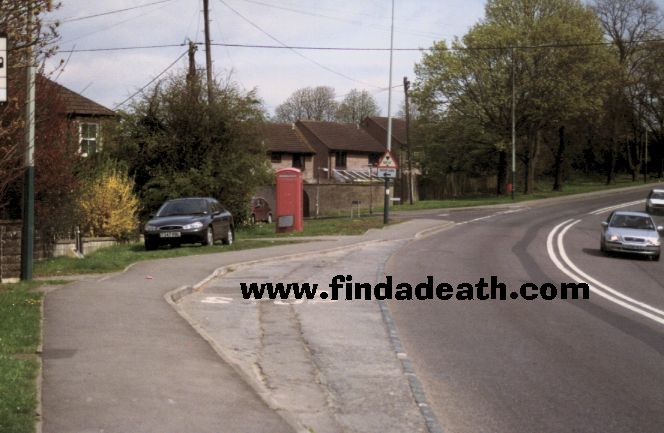 and blew a tire at Rowden Hill.  The car hit a lamp post. 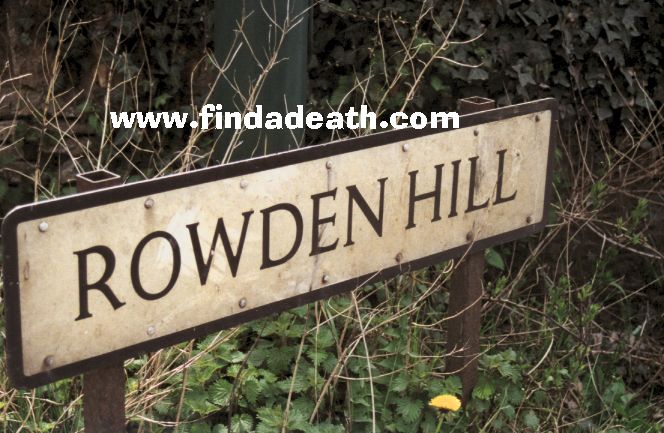 All four people in the car were injured. Gene Vincent broke a few ribs, his collarbone and suffered a leg injury. Sharon broke her pelvis. Eddie was thrown through the windscreen and suffered severe head injuries. He was rushed to St. Martin’s Hospital, 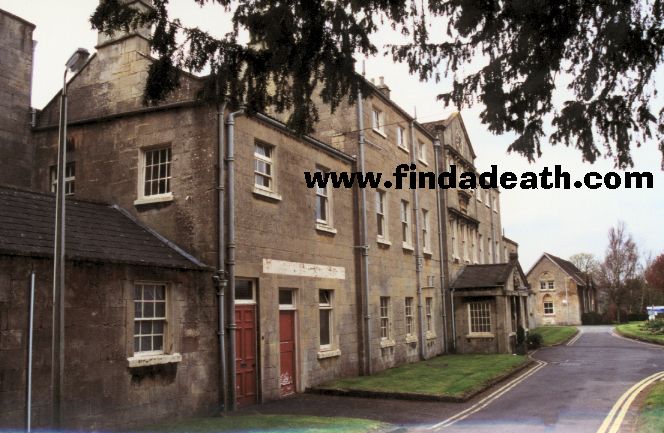 in Bath.  He was brought in the emergency entrance, 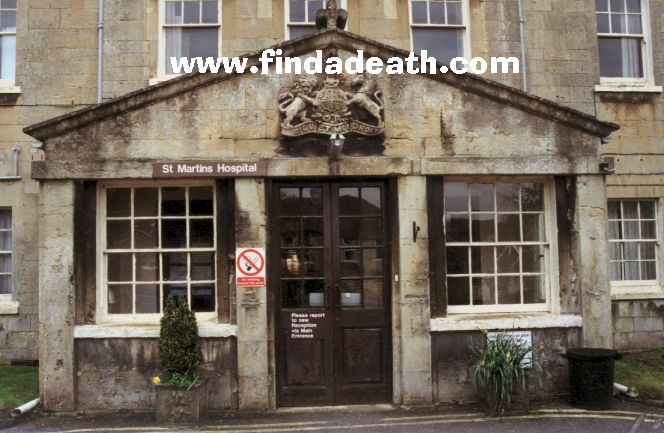 and he died there, that afternoon.

Eddie’s death shocked Britain and his recently recorded “Three Steps To Heaven” became the second ever song to posthumously top the UK charts (the first being Buddy Holly‘s: “I Guess it Doesn’t Matter Anymore” in 1959). Eddie was buried in Forest Lawn cemetery, California.

One legacy of Eddie was in the inspiration he (allegedly) gave to a young George Harrison who had followed Eddie from town to town on his 1960 tour. To this day, fans place wreaths at the accident scene every April 17th.  There is a memorial tablet at the exact scene of the accident, and also another one located on the grounds of the hospital where Eddie died. 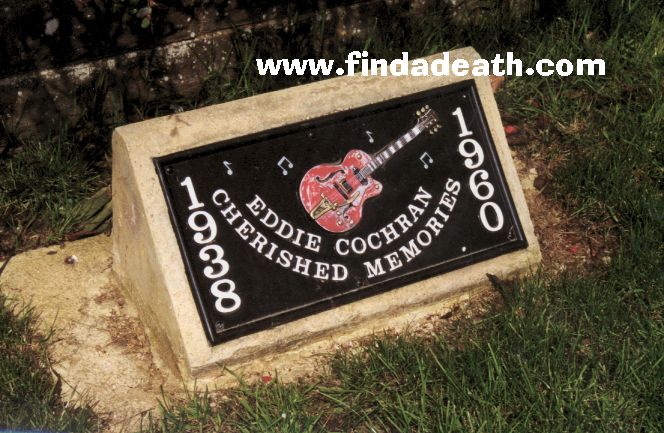 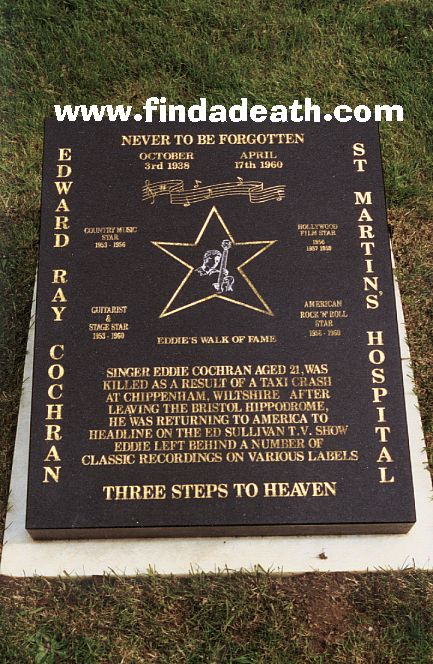 Gene Vincent’s leg injury ensured he walked with a limp for the rest of his life, which turned out to be only 11 years. He died from a bleeding ulcer brought on by booze. Don’t know what happened to Sharon Sheeley or the driver.  No doubt someone knows.

From when I was a kid, I always thought he had been killed in a London-type taxi, thinking it was one of those small upright black jobs.

Didn’t know it was a UK Ford Consul MkII which is a 4-cylinder Zephyr.(as I write this I’m looking at my one out in front of my place – it’s in nearly as many pieces as Cochran’s – restoration project). That driver must have been going like a maniac (ie. around 60mph plus): the Zephyr is an excellent handler (even on the bias-ply tires), is as solid as a tank, and yet the car has still been completely destroyed!

So if the photo is correct, the story should read taxi and not limo as stated.

Thanks Dave – I think the DAVE that wrote this meant it was a rented car with a driver.  Limo being a slangish term for taxi – and thank you for the info. Send pics!

December 2001, Findadeath.com friend/author/goodguy Warren Beath sends this:  in 1986 I located Jerry Capehart, who was Cochran’s manager and co-writer on many songs, and I went to Noel, Missourri to write his autobio of life with Cochran. He was very strange, a Bible toting right wing Christian fundamentalist Curtis Lemay CIA conspiracy theorist who had been a jet fighter pilot in Korea, and who believed he had been recruited to kill Martin Luther King.  What was funny, was there were hearings on TV at the time, and all the conspiracy shit he was spouting was being borne out on a daily basis. I recorded hours and hours of his recollections– he was so lonely, tho, it snowed, and he wouldn’t let me leave. I was a subtle prisoner, like Harker in Dracula– He said when Eddie was in the crash, he crawled across the pavement to wrap his arms around his big blonde guitar…and died.

Also:  Eddie Cochran’s favorite food, by the way, was chili beans with mustard on top. And that bitchin’ guitar sound from Summertime Blues? They did it in the studio by recording it real slow, then speeding it up. The chords sound so vibrant and full because of all the noise packed into the grooves when played at normal speed.

March 2002:  I read your site presently under construction about Eddie Cochran.  If you go to P.J.Proby’s site on www.p.j.proby.co.uk you will see information about Eddie’s girlfriend Sharon Sheeley who P.J.Proby knew very well.  Thanks for that, John!

Hi, nice site. Found it on a Google search for Eddie Cochran’s death which had been referenced in some Beatles info I was reading. When I saw you were requesting more info about his girlfriend, Sharon Sheeley, I got curious, too. Someone had suggested P.J. Proby’s web site so I followed your link to his site and then to a site about Sharon herself (link below).

It seems she was much more than Eddie’s girlfriend (actually fiancee). She was a rather successful songwriter in her own right. She penned “Poor Little Fool” that was a number one hit for Ricky Nelson in 1958 (ironically, that song was #1 the day I was born!) and co-wrote with Jackie DeShannon after returning to the US after recovering from Cochran’s fatal crash. She died on 5/17/2002 of a cerebral hemorrhage suffered a few days before. Anyway, there’s a lot more there if you’re interested. But I think this link is a better answer to the question of whatever happened to her. Sorry I can’t help with the driver of the car.

I read your Eddie Cochran page with a lot of fond memories and noticed that you mentioned not knowing what happened to the limo driver or to Sharon Sheeley.  Well, I can’t help you with the limo driver, but Sharon Sheeley passed away on May 17, 2002.  Here are two sites about it:

http://members.tripod.com/~jackiedeshannon/jdsas021207.html
For more about Eddie, check this out.