This is another story that could get quite convoluted – if I don’t stay focused. Before I go on, does anyone get irritated when Bill Cosby graces the screen? God, I can not stand that guy. I wouldn’t wish what he went through on anyone, but frankly, Bill Cosby bugs my ass. I stopped eating pudding pops because of him. Anyway, on to his handsome son…

Ennis normally lived in New York City. He was pursuing a Master’s in special education at Columbia University. The following pictures of his New York home come courtesy of Findadeath.com’s New York contingent, Stacy Weinstein and Joanne Melito. Thanks again, you two. Ennis’ house is just down the street from where Montgomery Clift lived. The address is 243 E. 61st Street (Monty’s was 217). Here’s the front door. I wonder if those bars have been there all along, or did it turn into a fortress after the murder? 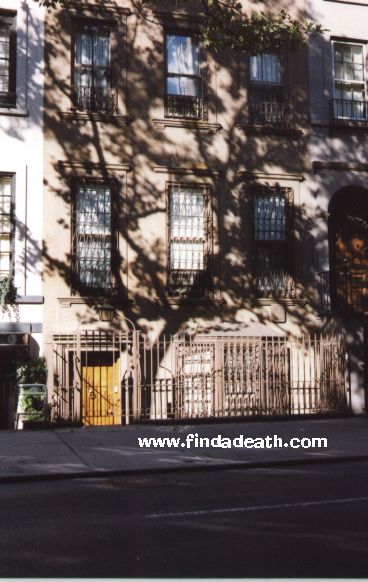 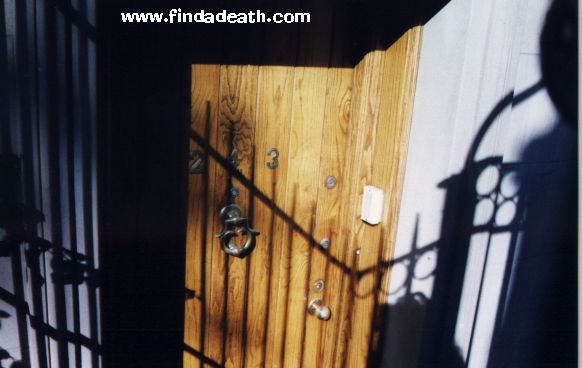 Ennis was on a two-week vacation in Los Angeles. At around 1am on Thursday the sixteenth of January 1997, he was driving his convertible Mercedes (it was registered to his father’s production company) northbound on the 405 freeway. This is the same freeway that OJ Simpson had his famous car chase. I always thought OJ should have blown his brains out when he had a chance. Sorry, I digress.

Ennis Cosby was on his way home to cook a steak for himself, and then he was going to see his friend of five days, Stephanie Crane, who is a screenwriter and also has special education interests. They were just friends. Ennis was coming up to the Sepulveda Pass, when he got a flat tire, not far from Stephanie’s home. He pulled off the freeway on to the service drive, Skirball Center Drive, 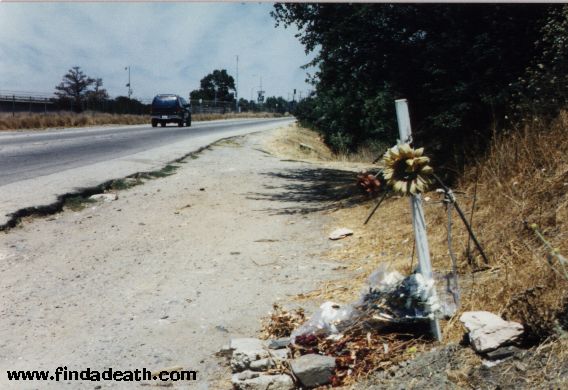 He used his mobile phone to let Stephanie know that he was going to be late, and ask her to lend a hand. A few minutes later, Stephanie (in a mink coat) drove her Jaguar to Cosby’s convertible, and used her headlights to help him change the tire. She spoke to him briefly, then returned to her own car to stay warm.

A few minutes later she saw a white male standing next to her car window. He said to her, “Get out of the car or I’ll kill you.” Instead, she booked. She drove up about 50 feet and spun around to illuminate the area. What she saw was the white male running from the scene, and Ennis lying on the ground. She freaked (again, who wouldn’t?) and tried to flag someone down. One man did stop, looked at Ennis and told her it “did not look good,” and left. Dick. Stephanie finally called 911, and police arrived to find Ennis dead. He was only 27. 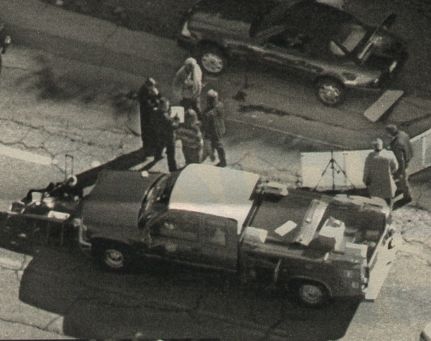 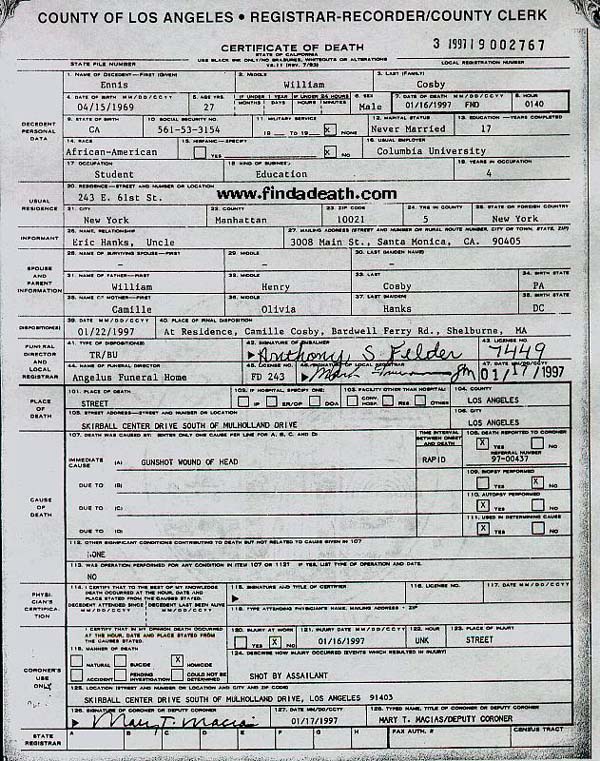 Ennis was shot once in the head. He was clutching a pack of American Spirit cigarettes (the killer probably asked to bum one). He was also wearing a Rolex, and had 3 $20 bills in his pocket. Stephanie described the killer to the police as “white trash” who looked like the character Sean Penn played in Dead Man Walking.

There was another witness that passed by the scene. He was driving a blue hatchback car, and was finally tracked down at a Chinese Restaurant in Torrance, CA. He went in to borrow a spoon (that’s laughable.). He knew that the police were looking for him, but chose not to get in contact with the authorities because he “did not see anything of substance.” He should have been thrown in jail, just for that, but he was questioned and released.

Ennis’ body was discharged from the County Coroners Office (thanks Bob), and flown back east. On Sunday the 19th of January, there was a private funeral at the Cosby home, in Massachusetts. Ennis is buried on the family estate on Bardwell Ferry Road, in Shelburne.

In March of 1997, Bill Cosby (ugh.) visited the scene of the murder, and placed a cross at the site which bore the message, “Thank you, friend.” In August of the same year, I visited the site. I don’t know if the cross in the photograph is the same one. Highly doubtful. As you can see, there were flowers there, and a note to Ennis from someone. Why is it that people leave notes for dead people? Its not like they read them, and others (like myself) just mock them. Flowers are nice, but the note thing has always had me baffled. Anyway, here are some rocks I took from the scene. 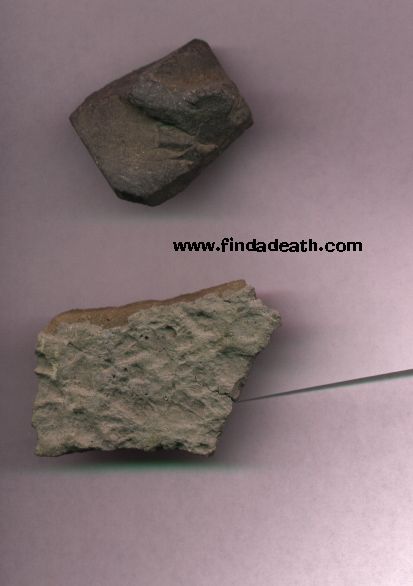 After a huge manhunt, with The National Enquirer and America’s Most Wanted joining in, a massive reward was set up for the capture of the killer. The killer is Mikail Markhasev. He lived on Magnolia Blvd, in LA.  His building is located at 12411 Magnolia, and he worked at a place called, “Mainly Seconds” just down the road.  He was bragging shortly after the murder, that he killed a black man, and it was all over the news. One of the people he was bragging to, Christopher So, called The National Enquirer and snitched on Markhasev. They in turn told the cops, and Markhasev was arrested.

On a routine search of Markhasev’s jail cell, a note with the words “it was a robbery gone bad” written on it, was found. On August 11th, he was sentenced to life in prison. Upon hearing the news, he flipped the bird to anyone that would look. Charming.

Several days ago, Markhasev stopped all of his appeals and admitted his guilt and apologized to the Cosbys.

July 2011 – The Ennis Cosby memorial marker on the roadside is still there.  Findadeath friend Mark Masek snapped this picture. 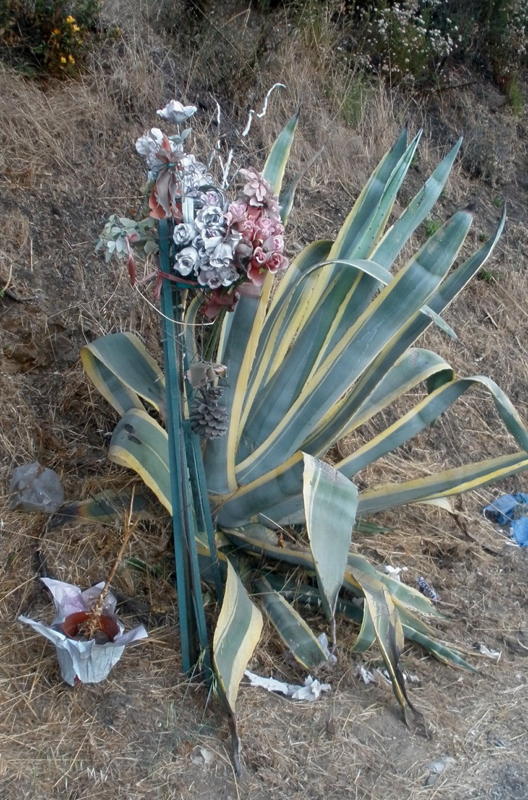