I thank Findadeath.com friend Todd Alexander Dale, for writing this story. I again have to admit my ignorance about this guy. You learn something new each day, eh? On to Todd’s story.

With the publication of his first novel, This Side of Paradise in 1920, Scott had found great success at the age of 23. Many short stories and three more novels would follow; including The Great Gatsby and Tender is the Night. But Fitzgerald would have three strikes against him: The Great Depression, his wife, and large quantities of gin. (atta boy!)

His lifelong love was Zelda Sayre, a mischievous, bright belle from Alabama. 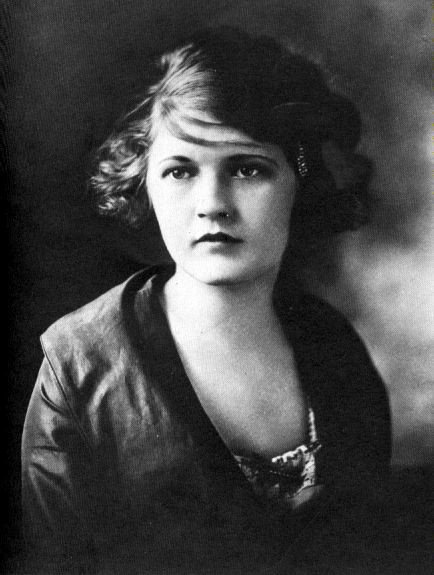 Zelda was his wife, confidante and cohort in amusement. Their 1920’s escapades are legendary; a decade Scott nicknamed “The Jazz Age.” He became its king, with Zelda his queen. Never staying in one spot for long, they moved from Manhattan to Great Neck, NY, to Capri, Paris, Rome and down to the Riviera and back again; but young Scott and wild Zelda’s excursions would not last. They had a daughter, and named her Scottie. 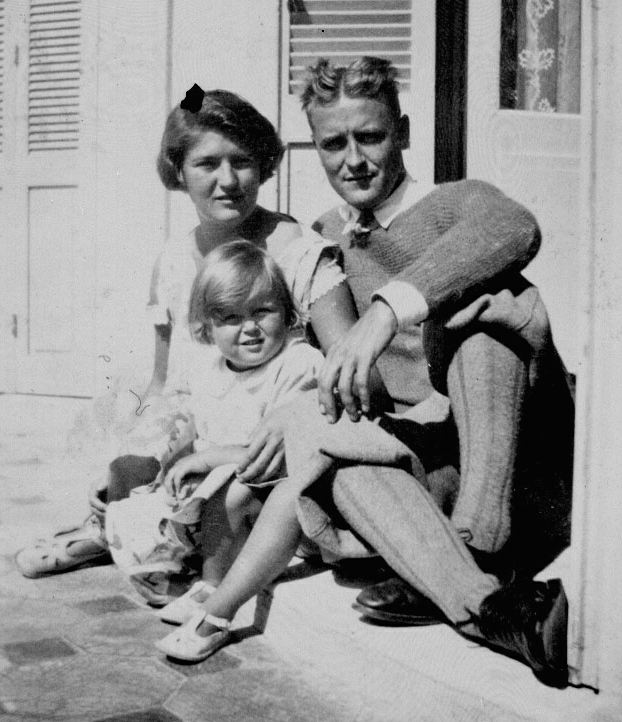 In 1929 Zelda gradually began to lose her mind, and Fitzgerald began to drink, and drink, and drink. (atta boy!) Though he rarely (if ever) drank when working, it was not uncommon for old Scott to finish off more then a quart of gin day. A flourishing alcoholic, he considered the consumption of a case of beer a day as “being on the wagon.” Though it must be said that Scott did go though long dry periods, but drinking one or two drinks would change Fitzgerald’s personality profoundly. 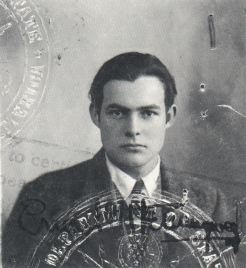 Ernest Hemingway, who had colossal tolerance for drink, described in his highly dramatized A Moveable Feast, that not only did Scott’s personality change, but a physical change would transpire before your eyes. Though “Papa” could hold his liquor better than most men could – alcoholism is a progressive disease, and both Hemingway and Fitzgerald would succumb to its long-term affects.

Scott completed his fourth novel, Tender Is the Night, published in 1934, his most ambitious novel was a commercial failure, and its merits were matters of critical dispute. In 1936 Fitzgerald wrote a series of confessional articles for Esquire. Collectively called, “The Crack-Up stories.” They describe his “emotional bankruptcy” and explored his feelings of failure. Fitzgerald’s friends reacted strongly to the “Crack-Up” series. Maxwell Perkins, his editor at Scribners and Son, was embarrassed for Fitzgerald. Hemingway denounced the essays as cowardly and shameful. John Dos Passos thought the series were an abuse of Fitzgerald’s talent through “spilling it in little pieces.” All this time, his once immense income dropped considerably, his short stories (his bread and butter) did not command his 1920’s price tag. And to make matters worse, he was keeping Zelda in expensive sanitariums, and providing for his daughter Scottie’s private education. By his 40th birthday, he had hit bottom, reaching a point where he pitifully tried to commit suicide by drinking a bottle of morphine. Whoops.

His luck changed however, in 1937, when Fitzgerald was offered a six-month contract with MGM at $1,000 a week. He moved into the Garden of Allah, a Spanish style apartment complex on Sunset Boulevard (Now demolished. Bastards.), which was directly across the street from the Chateau Marmont. 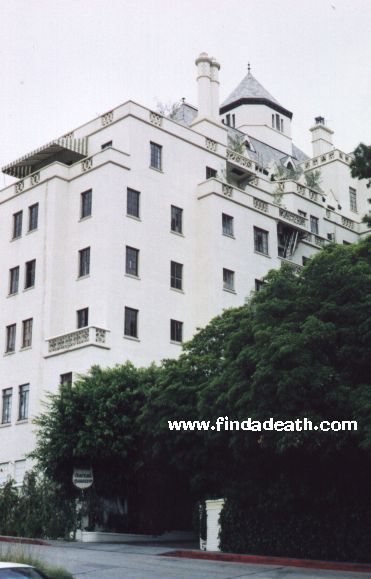 “The Allah” was a not a good place for an alcoholic, let alone a writer. Partying and heavy drinking were abundant and Fitzgerald would soon move; first to 114 Malibu Beach, but he had tuberculosis, and the winters were too damp for him to tolerate, so in November of 1938 he rented a house on an Encino estate. Scott worked hard tying to curb his drinking, having long periods were he’d only drink gallons of Coke Cola and chain-smoked Chesterfield’s.

Many outstanding writers at that time had come to Hollywood for the high wages, among them Robert Benchley, Dorothy Parker and Aldous Huxley. Fitzgerald would lunch with them at the MGM commissary, the Brown Derby and Musso and Frank. 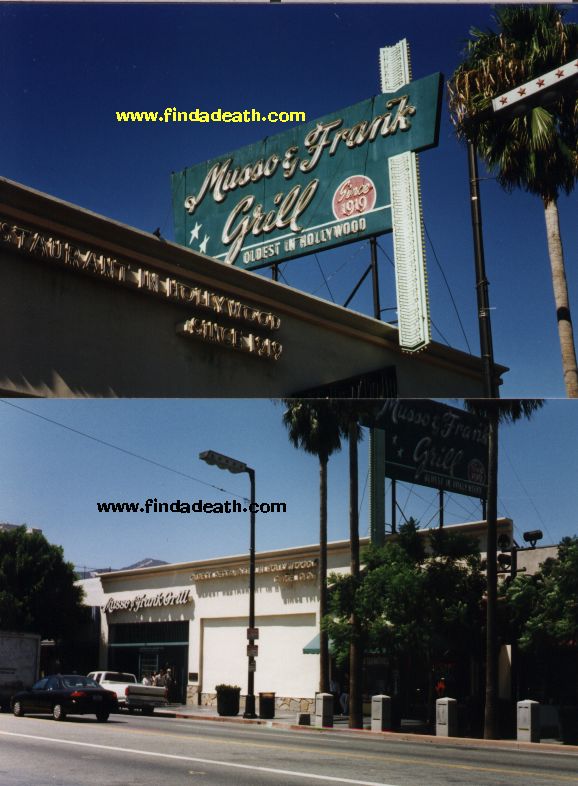 He became friendly with Spencer Tracy, Errol Flynn, and Clark Gable, and yet he hated Hollywood and all it represented. In a letter he wrote to a friend back east he said, “Hollywood is a dump – in the human sense of the word. A hideous town, pointed up by the insulting gardens of its rich; full of the human spirit at a new low of debasement.” Once at a MGM party, Fitzgerald was introduced to Joan Crawford, and he mentioned to her that he was working on a screenplay in which she was to star. Her reply was, “Write well, Mr. Fitzgerald! Write well!” To an associate, Scott quipped, “Bitch.” (He showed restraint.)

Fitzgerald met a woman in 1939, named Sheilah Graham. Sheilah was 33, and had heard the name “F. Scott Fitzgerald” but had never had read one of his stories, but she was overwhelmed with his charm and wit. She was a sought after young lady – even Errol Flynn would try to add her to his list, but without success. They began a relationship that became troubled when Fitzgerald would fall off the wagon. When Scott did drink, a bender would result with poor old Scott either in bed for days, or in some cases, he would have to be hospitalized. Here is a photo of Scott with fellow great author John O’Hara in late 1939; Fitzgerald is obviously unwell. 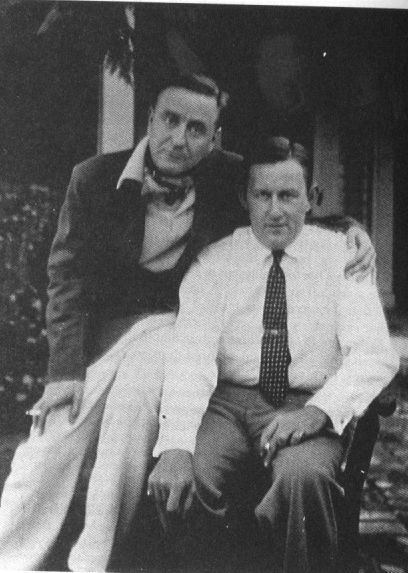 He would fail at the studio hackwork, getting only one screen credit in 1938 for the highly acclaimed picture Three Comrades. This is a picture of him, circa 1938. 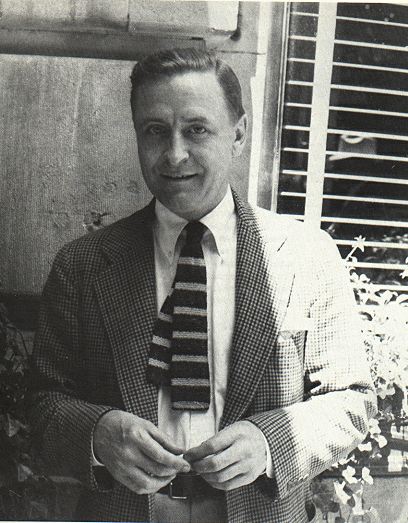 For the next year, his salary was raised to $1250 a week. But it would not be renewed, and he scrambled for freelance work, but his drinking and its reputation would make employment difficult. Sheilah had tired of his drunkenness, abuse and the embarrassment he had inflicted upon her. Fitzgerald, on his own, quit imbibing altogether in January 1940. Sheilah never saw him have a drop again.

He turned to what was his true talent, writing novels. He started work on The Last Tycoon, the predecessor of many novels and movies that would legitimately strike at the Hollywood studio system. But he was in poor health; gin, cigarettes had taken their toll, he had developed “Angina Pectoris” a result of “Alcoholic Cardiomyopathy” meaning that the booze had hardened his arteries and enlarged his heart. His first coronary episode was at Schwab’s Drugstore (Now demolished. Bastards.) in late November 1940 while buying cigarettes. At this time he had rented a top floor apartment at 1403 North Laurel Avenue in West Hollywood, a block from Sheilah’s apartment. 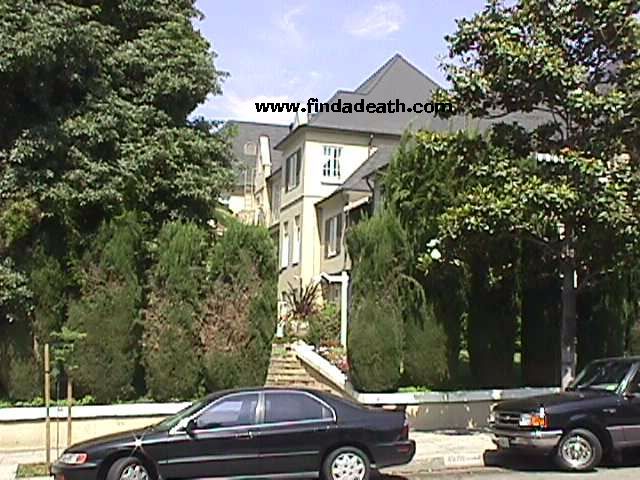 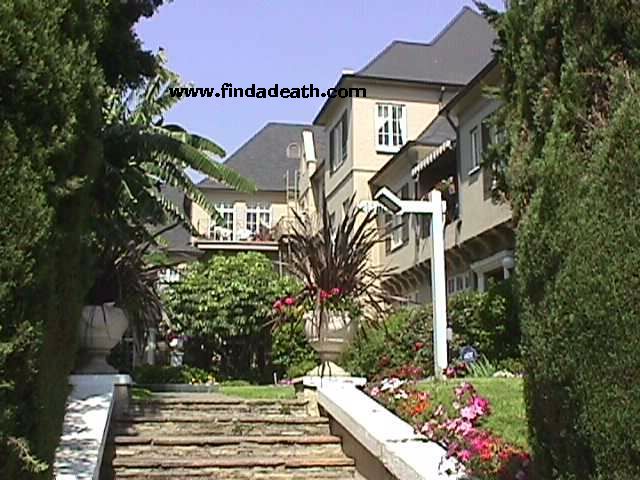 Across the hall lived a young starlet by the name of Lucille Ball (BWOAHAHAHA). After his mild heart attack, he wanted to avoid climbing stairs, so he moved in with Sheilah Graham at 1443 North Hayworth Avenue. 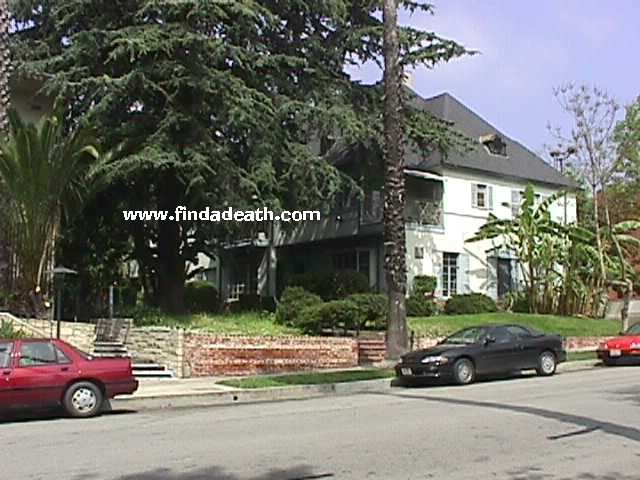 Want to see the mailbox? 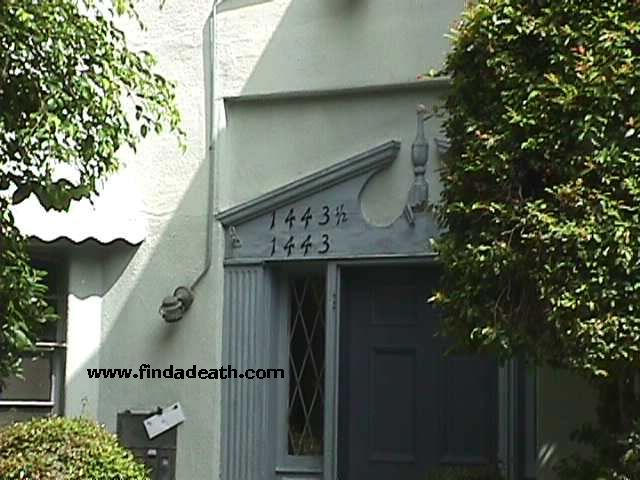 Scott was working hard on The Last Tycoon and had real faith that it would put him back on the top. His old friend Ernest Hemingway was having great success, and had established himself as the premier writer of the time. He had just published For Whom the Bell Tolls. Scott read it and praised it as “better than anybody else writing could do.” There had always been a competitive rivalry between the two, and Fitzgerald believed that “Tycoon” would rightfully re-establish himself as Hemingway’s equal.

But he was on borrowed time; On December 20th, he and Sheilah attended the premiere of This Thing Called Love starring Melvyn Douglas and Rosalind Russell. As they were leaving the Pantages Theater, Fitzgerald experienced a dizzy spell and had trouble getting to his car. 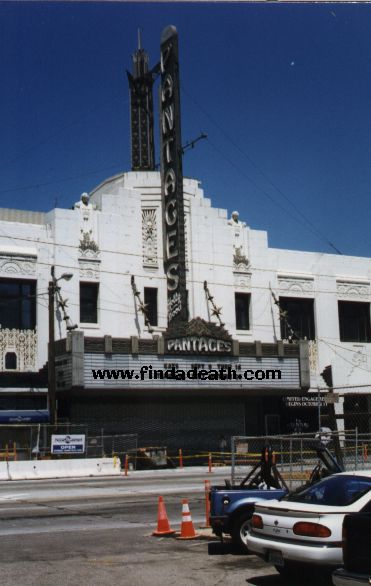 Feeling humiliated, he turned to Sheilah and said, “My God, they are all going to think I’m drunk.”

He declined to see a doctor that night because his physician was coming the following day. On the 21st, Scott and Sheilah were enjoying a quiet Friday afternoon at her Hayworth Avenue apartment listening to classical music and reading. Thumbing over the LA Times, Fitzgerald predicted that the German-Italian pact would force America into the war; adding, “Ernest won’t have the field to himself, I will be there too.”

Beethoven’s “Eroica” was filling the ground floor apartment, as Scott ate a Hershey Bar and made notes in his just arrived Princeton Alumni Weekly; 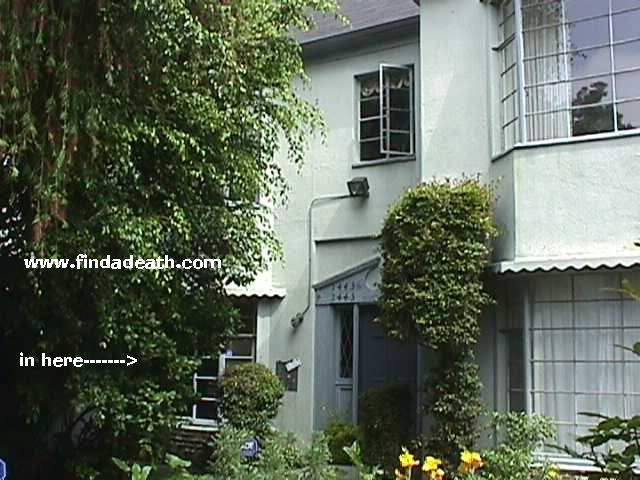 Sheilah saw Scott jump from his armchair, grab the mantelpiece, gasp and fall to the floor. Sheilah, not knowing what to do, tried to revive him with pouring brandy into his clinched teeth. (atta girl.) She ran to the manager of the building, Harry Culver, founder of Culver City (small world) who said when he saw Fitzgerald, “I’m afraid he’s dead.” Scott had lived forty-four years, two months, and twenty-seven days. The body was removed to the Pierce Brothers Mortuary, 720 West Washington Boulevard, in Los Angeles. The mortician did such a poor job that friends and associates said Scott looked like a mannequin, his skin covered under globs of mortician’s pancake. No lines in his face, no signs of a hard life lived, only in the hands – which were stained with tobacco, and looked older then his 44 years. 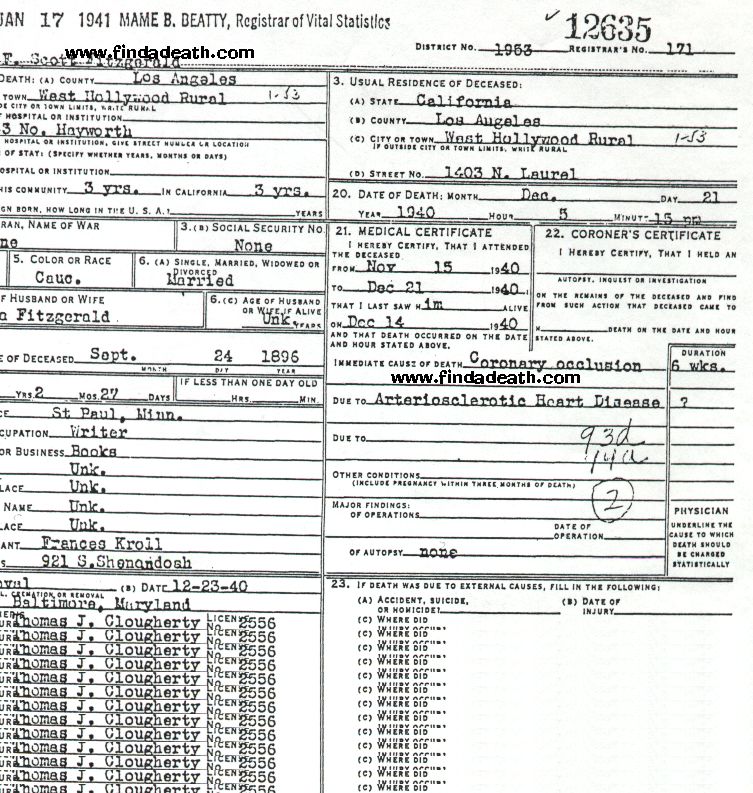 Dorothy Parker, Fitzgerald’s old friend, cried and whispered out loud, “The poor son of a bitch,” a sorrowful line from The Great Gatsby. Fitzgerald was buried at Rockville Union Cemetery, Rockville, Maryland where his father’s family was from. Saint Mary’s Catholic Church in Rockville would not allow his burial in the family plot of the church cemetery because he was a non-practicing Catholic at the time of his death. Zelda was too ill to attend the service. She would spend the rest of her life, in and out of sanitariums, in March of 1948, after voluntarily returning yet again to Highland Hospital in North Carolina; a fire broke out were she was sleeping; killing nine patients including Zelda. She was forty-seven. Their daughter Scottie was able to have the Baltimore Diocese’s verdict reversed, and in 1975 Scott and Zelda’s graves and single marker were moved to Saint Mary’s church cemetery next to Fitzgerald’s parents.

His remains were placed in a casket with a glass porthole for viewing the face while the casket top remains closed. I lived in Washington DC, which is a 20 minute drive from Rockville. I stopped by Union Cemetery and asked one of the groundskeepers if he had been working there when they disinterred FSF and his wife Zelda. He said that he had, and was one of the crew that removed the two vaults. Because of the lack of room at Saint Mary’s, they would have to use a double vault stacking both coffins on top of one another. In any case, the two old vaults would have to be opened and the caskets removed.

I have never seen a 35-year-old dead body, but my new friend had. He informed me that Mr. Fitzgerald’s face was yellowish and tight, and his hair the same colour. Lovely. He had a suit on with and orange and black tie (go Princeton!) with a hanky in the breast pocket. Fitzgerald was always a great dresser. The groundskeeper said he didn’t really look all that bad. Zelda’s coffin was your typical metal.

In the sixty years since F. Scott Fitzgerald’s death, more than twenty million copies of his books have been sold, over sixty collections of his writings have been published, along with some eighty biographical and critical books and pamphlets. In 1999, Modern American Library asked scholars, critics and authors to list the greatest novels of the last 100 years. The Great Gatsby was ranked 2nd just under James Joyce’s Ulysses; Tender is the Night came in 28th. Mr. Ernest Hemingway placed 45th for The Sun Also Rises and came in 74th for A Farewell to Arms. Not bad, Mr. Fitzgerald, for an unemployed Hollywood hack.

So bite me Hollywood.

Here is his Last Will and Testament. 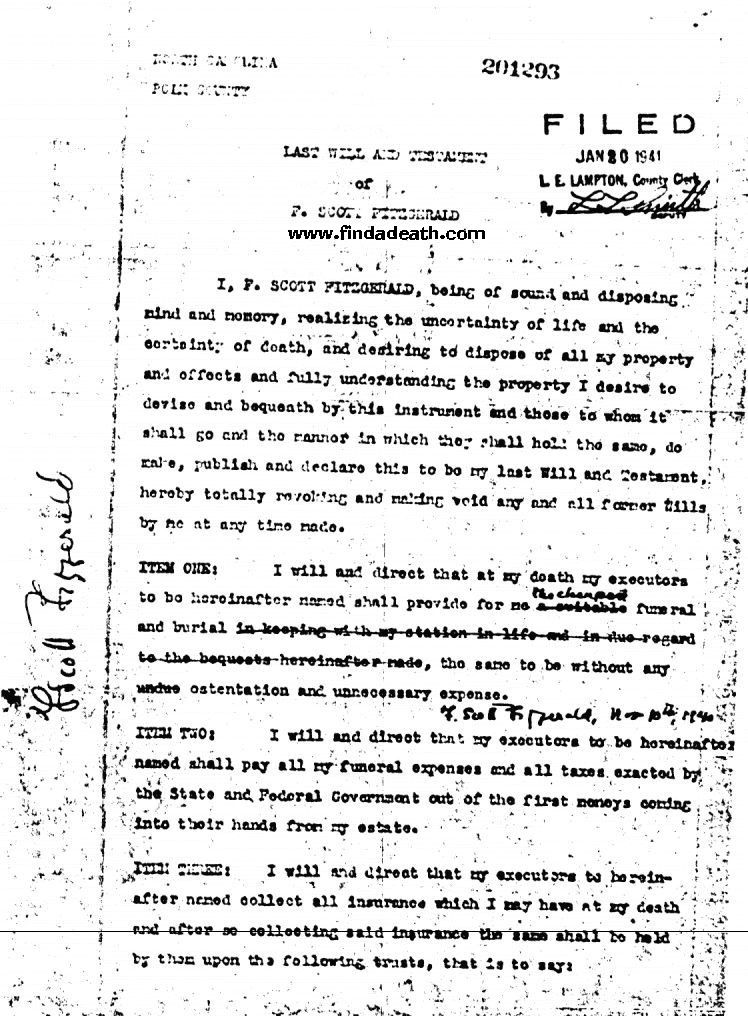 Thanks to John McIntyre for the pictures of Sheilah Graham’s apartment.

And thank YOU, Todd, for a really interesting story. I had no idea.