At my age, flowers scare me.
Too bad that all the people who know how to run the country are busy driving taxicabs and cutting hair.
First you forget names, then you forget faces. Next you forget to pull your zipper up and finally, you forget to pull it down.
You know you’re getting old when you stoop to tie your shoelaces and wonder what else you could do while you’re down there.
If it’s a good script I’ll do it. And if it’s a bad script, and they pay me enough, I’ll do it.
Happiness? A good cigar, a good meal, a good cigar and a good woman – or a bad woman; it depends on how much happiness you can handle.
I don’t believe in dying. It’s been done. I’m working on a new exit. Besides, I can’t die now – I’m booked.
Don’t stay in bed, unless you can make money in bed.
I look to the future because that’s where I’m going to spend the rest of my life.
It takes only one drink to get me drunk. The trouble is, I can’t remember if it’s the thirteenth or the fourteenth.
Show More Quotes
Show less

Another legend gone. This one’s birth name was Nathan Birnbaum. He was terrific, and in my opinion, he will never be any better than he was as “Mr. Kite,” in the film Sgt. Pepper’s Lonely Hearts Club Band. I loved it, except for the spooky clowns in that one scene, and lined up to see it properly about 8 times. I just watched it the other night, and it was fantastic, except for those spooky clowns in that one scene. I found the soundtrack on CD. I had the 8-track, but it’s gone now. Hey, my Cordoba only had an 8 track in it, but at least it matched the fine Corinthian Leather. 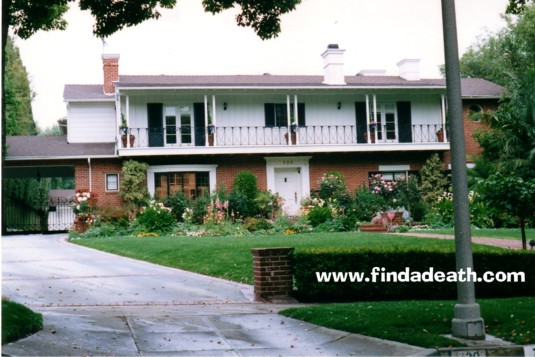 Legend has it that he and his best buddy Jack Benny bought lots close to each other after they had lunch together one day in 1935, and built their homes there. The house was used as the facade for The George Burns and Gracie Allen Show, from 1950 to 1958.

Added July 06: Fun thing about the place, when they poured the new driveway, George put his initials in the concrete, and they are still there today. 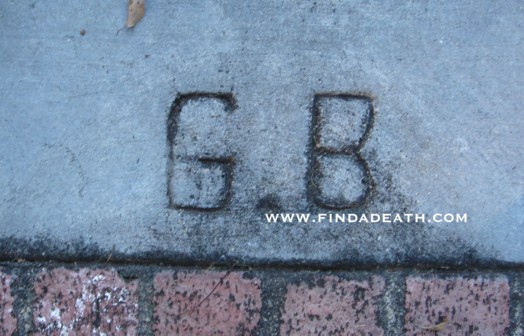 He and Gracie were married for 38 years, and she was taken from their house and died in Cedars of Lebanon Hospital in Los Angeles, on August 27th, 1964. Cause of death: a heart attack. She was 62 years old. Her funeral was held on August 31st, and she was buried at Forest Lawn Memorial Park, in Glendale. 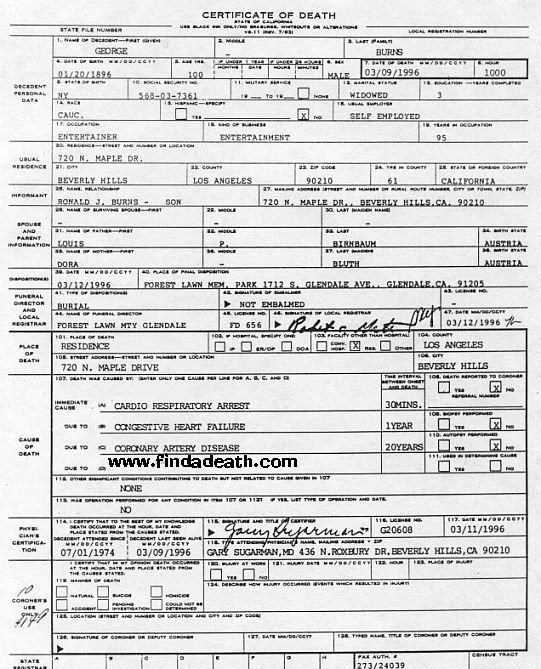 SEPT 06:  Recently I had a man on my tour that worked for Bobby Darin. Bobby and George were good friends, and when Gracie died, Bobby slept over in George’s house (in Gracie’s twin bed), to keep George company. After a couple of nights, and George was still having a problem sleeping, Bobby suggested that George move to Gracie’s bed, and tried that. It worked. I love that story. George kept her wedding band on his watch chain for the rest of his life.

Nov 08:  Another great guest on my tour, Paul Driscoll sends this: a good friend of mine dated Burns in the 1970’s…and how she always knew if they were going out or staying in for dinner.  If his hair was on, they were going out.  I saw her in Scottsdale after my LA stay and told her about the tour.  She added that George had two trunks — one full of hairpieces parted on the right, the other one on the left.

In July of 1994, he fell in his bathtub and cracked his head. He was never really in great shape after that. Even so, everyone was determined to see George through his 100th birthday. He had shows scheduled at Cesar’s Palace in Vegas, and the London Palladium.

Sometime in 1995, I was driving past George’s house, and saw his car pull into the driveway. I pulled over and got out, and (I know this is rude) but I just introduced myself, and asked him to autograph my Sgt. Pepper album cover. Okay, I knew he was going to be there. He was really tiny and frail. Here’s a photo of the last time I saw him, going into his house.

He attended a Christmas party at Frank Sinatra’s in 1995, and caught the flu. Death was now knocking down the front door.

One source I read said that before he died, he went to his office, and dictated letters to close friends that started, “By the time you read this, I’ll be playing the harp with Gracie. I just hope that when the recital is over they’ll let me smoke a cigar!” He left instructions to have them sent out after his demise. Clearly, he was ready, willing and able. Death was now making its way up the stairs…

His health deteriorated considerably, and all of the shows scheduled to mark his 100th birthday were cancelled. On January 20th, it was his 100th birthday. The press release said that George quietly toasted in his birthday with family members. Three days later there was a report; “He is not eating, not taking solid foods. Not that he doesn’t want to. He is not able. The possibility is he will be placed on intravenous feeding shortly. There has been a debate among his closest as to whether this should be done. The truth of his condition is being kept quiet.” Personally, I think Death was in the bedroom, and made himself quite comfy.

49 days (supposedly) after his big birthday, a nurse found George shaking and breathing shallowly in his bed. This was on March 9th. A little while later, he “curled up like a baby, and in that comfortable serene position, he died.” There was no pain or suffering. His adopted son Ronnie was with him. George and Gracie also had an adopted daughter, Sandra, 7 grandchildren, and 5 great grandchildren. 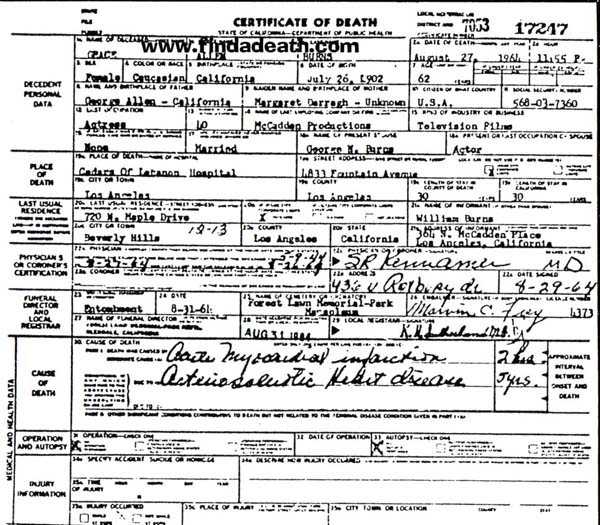 As usual, the Hollywood Chamber of Commerce put flowers on George’s star, on the Walk of Fame.

His funeral was held on Tuesday, the 12th of March, at the Week Kirk o’ the Heather church, in Forest Lawn, Glendale. 100 non-celebrity mourners crammed in the chapel, and listened to reminiscences from old pals. ZZzzz. His long-time pianist and conductor, Morty Jacobs, played a medley of old tunes that Burns used in his act, like “Sidewalks of New York”, and “By the Light of the Silvery Moon” (not the sun, but the moon). His long-time manager and friend, Irving Fein said to the group, “He often said he knew entrances and exits. Last Saturday, he knew it was time to go.”

According to his butler and resident hunk, Daniel Dhoore, they buried George in his best dark blue suit, light blue shirt and red tie. Dhoore said, “We put three cigars in his pocket, put on his toupee, put on his watch that Gracie gave him, his ring, and in his pocket, his keys and his wallet with 10 hundred dollar bills, a five and three ones – so wherever he went to play bridge he’d have enough money.”

His casket was taken to the Freedom Mausoleum in Forest Lawn, Glendale, to be entombed with his wife.

Two weeks after his death, his house went on the market and was sold for just under $2 million. I wonder if they kept the mosaic GB in the driveway.

I did manage to sneak in the house while the builders were working on it, and before I got kicked out, I stole a little plate that covered a light switch in his den. Here it is. I also stole, and this is a bit ridiculous, a door from his pool house. It HAS to be about 10 feet tall, and my friend Steve and I put it on top of my car, it was around 2 in the morning, and we took it! THEN, we went back and got one for Steve. I cannot imagine the neighbors NOT hearing us rustling around in that dumpster, but I’m pleased to still have the thing.

Keep in mind, for the couple of snotty emails I got about my taking these things, George was dead, his family had already sold the house.  It was empty and being gutted for renovations.  No one in that house or coming in, had any emotional attachment to the rubbish I took.

Trivia: On his nightstand was a copy of “The Magic of Believing.” It’s a self-help book that is really old, and a lot of old Hollywood swear by it. Never read it myself.

More Trivia: In 1979, George was asked to leave his footprints at the Chinese Theater, in Hollywood.

Even more Trivia: Someone told me a story about George being unfaithful to Gracie once. He felt guilty, and gave her some god-awful plate to appease his conscience. She knew about the indiscretion, but they never EVER discussed it. Her only comment was, “I love you, but if you ever buy me another plate, I’m leaving you.”

Findadeath.com friend Talia sends this comment regarding the plate.

According to the book George wrote about his wife (Titled “Gracie: a love story”) the plate story went like this…

Gracie wanted to buy another silver centerpiece for the table, but they already had 3 of them and so George didn’t want her to. This somehow escalated into a big fight, and George went out for the evening to get away from her for a while. While he was out, he met some girl and they had a one-night stand. He felt guilty and ended up buying the centerpiece.

Years later, he heard Gracie saying to her friend, “I wish George would cheat on me again–I could use another centerpiece.”

(This is from memory, check the book for the exact quote.)

Question: Whatever happened to Sandy Farina, who played Strawberry Fields, in Sgt. Pepper? I ran into her in Chicago in 1984, and she was a session singer then. Anyone?  Coolness, Findadeath.com friend Amy Thomas sent me the info that she is still doing session singing.  If you are interested, check it out here.