This is a job for Superman…I mean, I’ve got to find him.
Knock the ‘t’ off the ‘can’t’.
Show More Quotes
Show less

Who was stopped by a speeding bullet.
Honestly, you could not make this up.

There is a LOT of information on Mr. Reeves, especially with the film Hollywoodland in recent years.   A fascinating film, and pretty accurate in the physical evidence aspect.   You can read about his career here, but on Find a Death, we concentrate on THE END.

The Adventures of Superman ran from 1951 to 1957, and when it ended, George found it difficult to get work, because he was typecast. He had appeared in the movie From Here to Eternity in 1953, but his part was cut back when audiences at screenings chuckled at seeing Superman in Hawaii. George lived in a modest house in Benedict Canyon, here in LA. 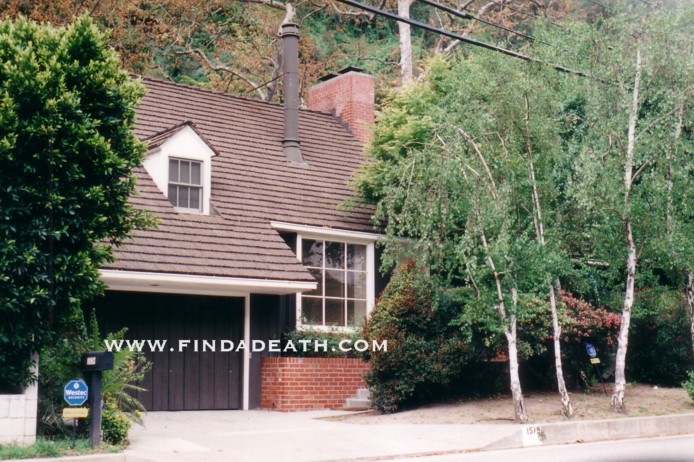 In June of 1959, things started to look up for George. He was getting work as a director, and he had agreed to do another season of Superman, in which he would also direct quite a few episodes of. He was also engaged to Leonore Lemmon, a New York showgirl. Lemmon moved into his house, and they were to be married on June 18. Guess what.

On June 15, George and Leonore had gone out to a rather boozy dinner, to celebrate the upcoming marriage. During the dinner, they had argued. After, they returned home and continued drinking. George went to bed at 12:30 a.m. Around 1, two friends came by for a visit. Reeves usually had an open door policy, but not after midnight. Shortly after they arrived, Reeves came downstairs to find out what the commotion was. Seeing the neighbors, he told them, “Get out. It’s too late for this nonsense.”  Leonore asked, “Is this a joke or a shoot?” meaning was he kidding around, or what? Reeves then apologized, and the group sat around talking.

The following is taken from the official autopsy report: At approximately 1:20 a.m., Reeves excused himself, and went upstairs to bed, which I believe is the room above the garage. 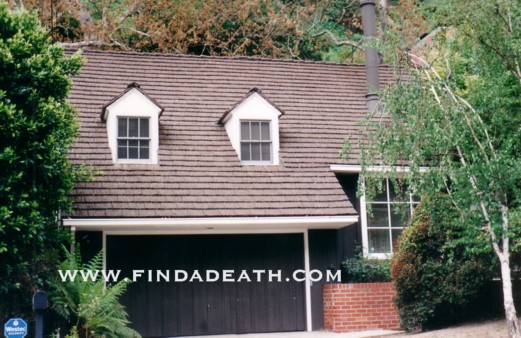 Reeves was lying across the bed on his back, naked, with a gunshot wound to the head. On the floor between his feet was a .30 caliber German Luger pistol. The police were called, and the guests were instructed to leave the premises. An ambulance arrived and pronounced him dead, and no doubt removed him from the house, out the front door. 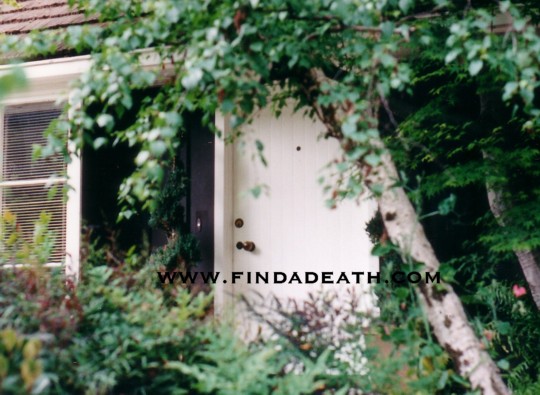 An autopsy ruled suicide. Here is a (WARNING) dead picture, though its surprisingly un-oogy. 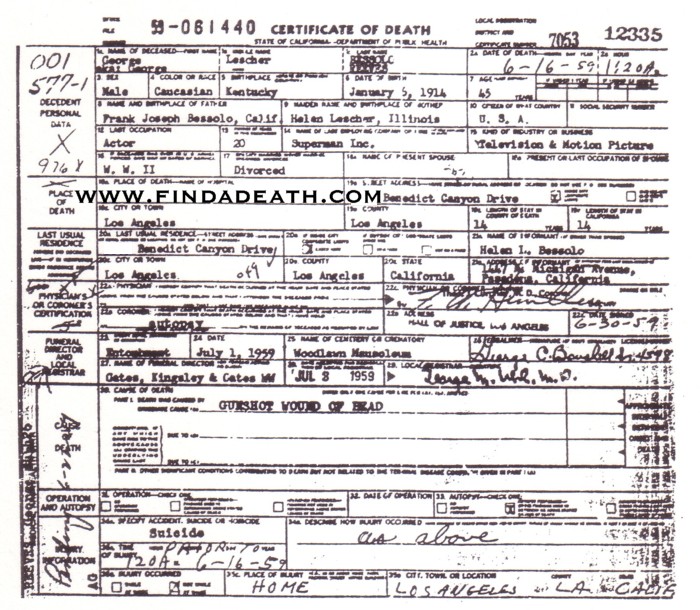 Exactly what happened that night was never fully resolved, due to varying drunken accounts. Many felt that Reeves was tired of being known as Superman, and that he killed himself out of anguish. Reeves also enjoyed playing with an unloaded gun. As you do. They decided that he was fooling around, not realizing the gun was loaded. Reeves blood alcohol content that night was .27 percent. Everyone involved decided that it had been a suicide.

However, Reeves mother, Helen Bessolo, was convinced that her son had been murdered. She had talked to him days before, and, according to her, he “was in a splendid state of mind.” She had the body exhumed, and a second autopsy was performed. She also hired private investigators to investigate his death. They decided that he had not committed suicide. Reportedly, the police had not been called until at least a half an hour after his death. There were also fresh bruises on the body. Another rumor was that a car was heard speeding away from the house as well. No charges were ever brought against anyone in connection to the case. Read more about his suicide, HERE.

George’s body was dressed in a gray Clark Kent Suit.  His body (Warning, Dead PIC) was taken to Gates/Kingsley/Gates on Sepulveda, and a funeral was held on Wednesday, June 30. Honorary pallbearers included Alan Ladd and Gig Young. He was cremated in Ohio, and ashes given to his mother, who then died in 1964. He left the bulk of his estate to Toni Mannix.

Now, back before the Internet, I would do anything to help my friend/hero Greg Smith, to do some real celebrity grave type research. He was in LA, I was in Chicago. I remember him asking me if I ever made it to Galesburg, IL, to let him know, because Reeves was supposedly buried there. I did make it, found the cemetery, and scoured every inch of the place looking for Reeves, or the name Bessolo as well. Up and down every single row. No luck. Then like 2 years later back in Pasadena, we found a niche, and I took a picture which has the name inscribed GB REEVES with a wrong birth date, but I’m sure it was the right urn. 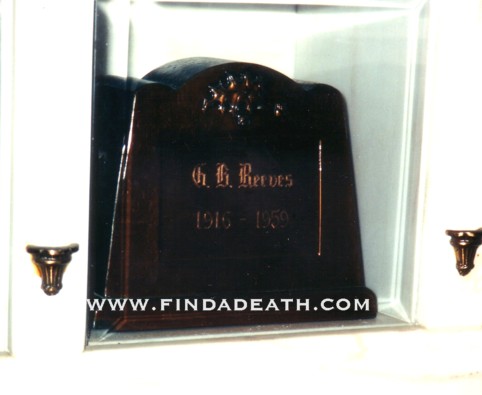 His mother was buried down the hallway at the time. Some time in the last few years, George was re-urned in this tight package. 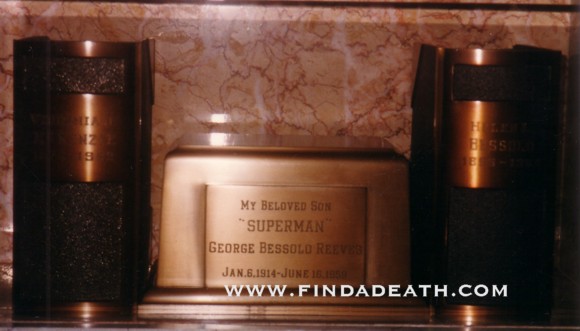 Either that, or I’ve got it totally wrong.  Something tells me, I’ll hear soon enough.

My buddy Steve Goldstein explains, “There actually is a “wrong” GB Reeves near the right one. Many folks stumble onto it looking for old George, and assume they’ve found him. They are separated by only a few feet of hallway.”  so there you are.  Mystery solved.

The most popular theory is that Reeves was murdered because of his romantic involvement with Toni Mannix. She was married to Eddie “Bulldog” Mannix, who had connections to MGM Studios and the underworld. According to the book Hollywood Kryptonite, Toni had hired a hit man to kill Reeves. To date, this has not been proven to be true.

I was running through the Reeves story, and thought I’d send along the text about Reeves from The Fixers book.  If you’ve ever been in the Benedict Canyon house, it’s apparent right away that no outside intruder could have killed Reeves while other people were in the house.

The front door opens into the living room, and off to the left are the stairs going to the second floor.  It’s a split level, and the steps go half way up and open to the bedroom over the garage (the windows you can see in front).  Then they turn, and go the rest of the way up to the second floor bedroom and bath, the only rooms up there.  Small bedroom; the police talked about how cramped it was.  Tiny window and a small ventilation window in the bathroom.  Obvious that no outside shooter could have snuck in – a houseguest and possibly his neighbor-lady girlfriend – were in the bedroom over the garage while George and Leonore were at dinner.

Even if someone could sneak in, the only way out was back down the stairs and out the front door.  Bathroom window too small, bedroom window same thing and dropped 20′ to a stone patio.  So the only two possibilities are (1) suicide, and (2) someone else at the house that night shot him.  The only likely person in that list is Leonore.  She was pissed at Reeves because he wouldn’t commit to marrying her; she told everyone she was his fiancé, but if asked, he always said the same thing; “I never said that.”  Always.

Also, they weren’t going to Mexico on a honeymoon.  It was a pre-arranged publicity trip, for which he was getting paid.  Her best friend (I describe her as a vintage Paris Hilton without the same cash, and her friend was her Nicole Richie) was coming, so it obviously was not the honeymoon described in the press.
My take, after going through everything, was that Eddie Mannix arranged the suicide thing, so people wouldn’t learn about the affair with Toni.  There’s no other reasonable explanation.
Wow, thanks EJ!

One thing I noticed in your story that was an error is that Reeves’ bedroom was not over the garage; those are guest bedrooms. His bedroom, the master, overlooked the backyard of the house and it was in this room that the deed was done by…whomever. That’s why two of the mysterious “other” bullets lodged in the living room; had his bedroom been over the garage, then they obviously would have gone into there instead. I came across this on a website a while back, although I can’t recall the name of it. The author’s excellent work included rare photos of the back of the house.

Recent forensic specialists have re-examined the photographs and official reports, and even with modern science, the case remains closed, and ruled a suicide.

Supposedly, the house has been bought and sold nine times in the years since his death. Occupants reported seeing Reeve’s ghost, with a gun in his mouth. And of course there is the “Superman Curse,” to which I say, whatever.

Trivia: The Daily Planet building in the Superman series was actually LA City Hall, which adds to the wonderful ridiculousness of this city. 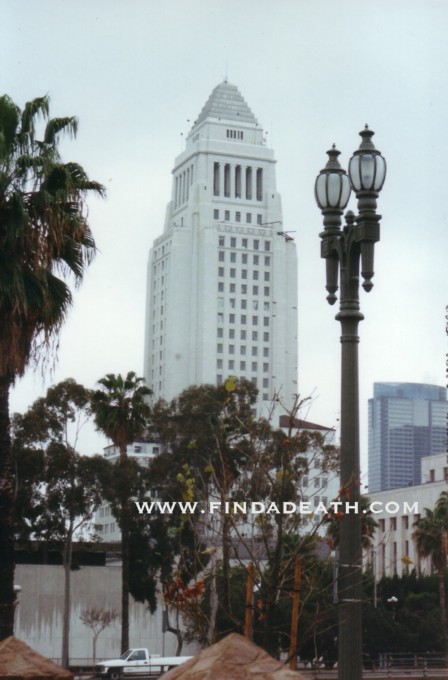 Trivia: He appeared in the movie Gone with the Wind, as one of Scarlett’s suitors in the picnic scene.

He also appeared as Superman on I Love Lucy.

My friend Steve Cox sent me this picture of a framed swatch of George’s Superman Cape. 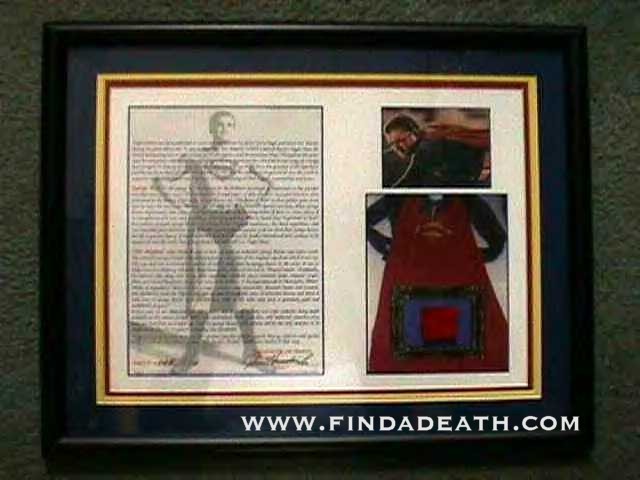 You can get your own copy of George’s fantastically interesting autopsy report and will at Celebrity Collectables, which includes several articles of correspondence, including this dishy telegram from the mother to the cemetery. 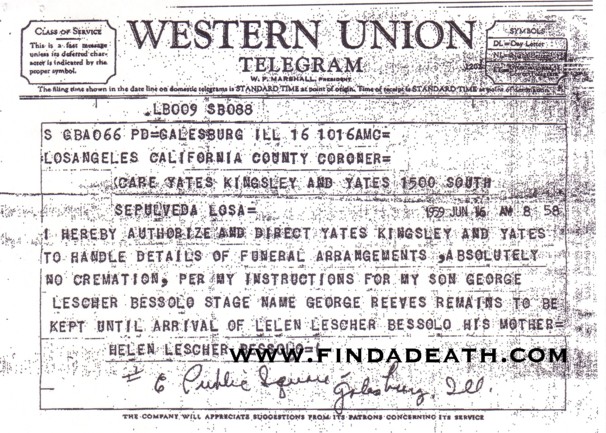 Big Thanks to Kevin Hassell for putting this story together, and for my old buddy Greg who is back in my life.