My demons, inner strengths and physical battles have guided me through life.
My principal once told me that I was a penny waiting for change. But I suspect that I irritated him probably because I was making more money than he was.
I am in control at all times.
Death is a very important part of life.
Rock’n’roll has to be destroyed and rebuilt in my name if it’s ever gonna accomplish anything.
I don’t wanna get old and stagnant and hang around.
I don’t have any influences, any heroes, it’s just me.
I’ve had women who move to the towns I’m living in, just pack up and move there, never even met ’em before, ’cause they heard I lived there.
I hate everybody.
I believe you can make forces of good and evil work for you, to get what you want.
Show More Quotes
Show less

GG Allin always maintained that he would commit suicide onstage, promising to take as many of his fans with him as he could! A ‘typical’ GG show could be likened to a war zone, with GG brawling with fans, bashing himself senseless and knocking out his own teeth with the microphone, and both eating his own shit (ugh) and throwing it at the audience (TAXI!). In fact, GG was arrested over 50 times over the course of his career for such crimes as indecent exposure, assault and battery and endangering the lives of his audience He spent a lot of time in jail cells and of course in hospital emergency rooms. However his death was to be least spectacular thing about his life of punk rock excess. 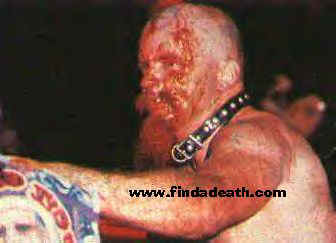 GG Allin’s final performance was at the Gas Station club, New York in 1993, and the rumor is that he’d already taken a shit load of drugs before the actual show commenced. As things got under way, GG took a few swings at members of the audience and the show seemed to be going (typically) well. However, having completed the second song, the power was switched off and the show came to an abrupt end. Not being the most reasonable person in the world, GG went a little nuts and started to smash the place up (but he was so nice…) he crashed his head through a French window and generally abused and punched anyone that came close to his hand. He soon tired of this and decided to leave the club in order to go and party at Johnny Puke’s apartment. He left the club and walked through the streets of New York, naked and covered in shit and blood. As he marched through the street, his fans followed along behind him, overturning trashcans and throwing bottles at cop cars… A mini riot ensued, with cars screeching to a halt as GG and his entourage staggered out into traffic. Finally, after some half an hour of this street theatre of the bizarre, GG and friends managed to hail a cab and get to Johnny Puke’s apartment to carry on with the festivities. 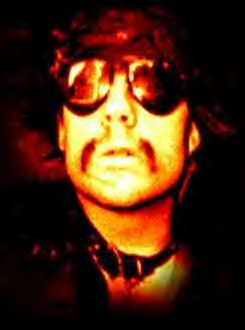 Back at Johnny’s Place, the party was in full swing with drugs and booze flowing freely in all directions. GG was in a buoyant mood again and was snorting heroin with abandon (tra la! tra la!)… As he passed out, people were grabbing him and posing for pictures with him, propped up with his arms around them. As the night wore on, people were tiring and crashing out, but GG Allin was already too far gone and died surrounded by the oblivious sleeping bodies of his friends. He was 36 years old. At first, people refused to believe that GG Allin could be dead…after all, he’d survived drug overdoses in the past…he’d also endured beatings, stabbings, blood poisoning several times and had always bounced back. But the truth sank in as the police came and then the ambulance took him away.

After all the promises of the ultimate sacrifice for Rock N Roll, GG Allin died the usual junkie’s death. I am sure that he would have been real angry at himself for dying in that way. 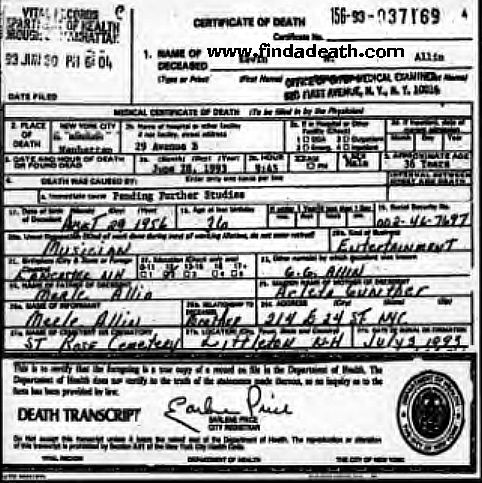 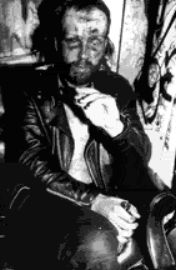 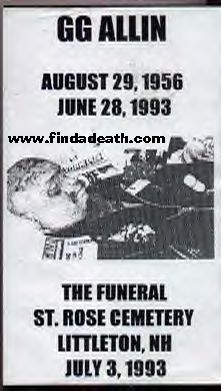 His wake was attended by his band mates, (including his brother, Merle) and various friends and hangers on. GG was laid out in an open casket, wearing his trademark leather jacket, dog collar, jockstrap, sneakers and a pair of “George Jetson” socks! He was not the sweetest smelling man in life, but in death, he had a strange scent, mixing flowers, feces, sweat, piss and whiskey. On his brother’s instructions, the funeral director did not wash or put make up on the corpse. As he was in life, so he was in death.  (this is kinda gross, but here he is, in all his glory.)

G.G.’s wake turned into quite a party with people putting drugs into his mouth and washing them down with slugs of Jim Beam… Once again, people were having their pictures taken with the lifeless GG and pulling his jockstrap down to gawp at his incredibly small penis…and of course, to take pictures of it!  (lovely.)

The last studio album that GG recorded with his band The Murder Junkies, was playing all the while in the background. Finally, as his casket was closed for the last time, his brother put a pair of headphones on GG playing some loud and tuneless music called “the suicide sessions”, that he’d recorded a few years previously. A fitting showstopper for a man that so desperately wanted to die!

His gravesite has become a place of pilgrimage for many of his fans where they come to get drunk and leave drugs and various bodily fluids in memory of the filthiest pervert that ever hit the Rock n Roll stage! I am sure that we shall not see the like of GG Allin again. The void left in the wake of his death will never be filled. 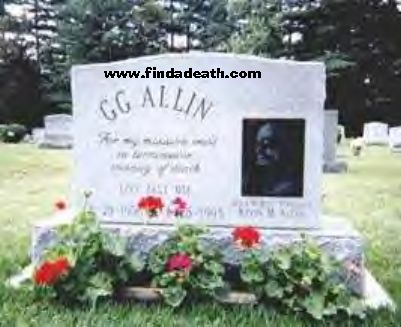 This in from Findadeath.com friend Vince Scheben:

I’m a big GG Allin fan and noticed that you have a few pics on your site and wanted to add a little bit of info I’ve found in my travels for GG stuff on the net..  so take this for what it’s worth..   GG’s original musical output was with a band called the Jabbers..  in the late 70’s, early 80’s…  they were actually competent musicians playing some great Ramones style rock n’ roll.  GG was very young and could actually carry a tune.  His lyrics on songs like “1980’s Rock and Roll”, “Automatic”, and “Gimme Some Head” only vaguely hinted at the depths he’d reach later in his career.  Rumor has it around the mid 80’s he went through a seriously ugly divorce and really began to live and breathe what he wrote about in his songs..  I guess it went down from here.  I’ve enclosed a great pic of a very youthful GG from his first album alongside a pic from the day he died..  pretty different dude.   Thanks Vince! 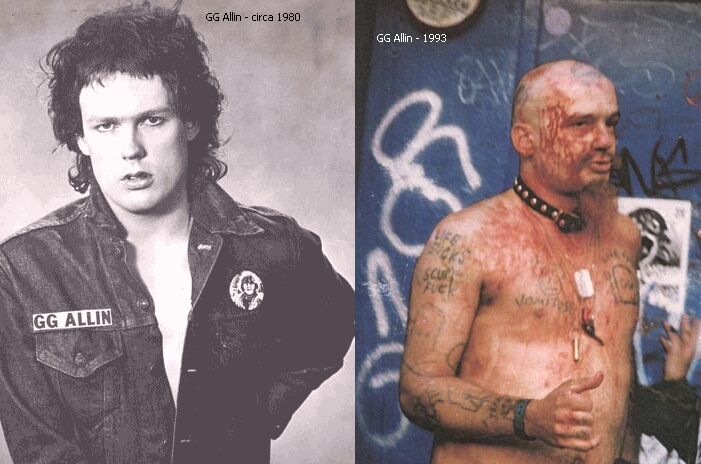 October 2004: Find a Death was mentioned in the Long Island Press over last weekend.  In the article, it mentions G. G. Allin and his feces flinging fun, and it caught the eye of new findadeath.com friend Jim Maloney.  He writes:  I was a paramedic working full-time for Saint Vincent’s Hospital in Manhattan and going to Fordham Law School at night. Even though it was summer, I was taking night classes because at the end of 1992 I had been burned out of my apartment at 16 West 95th Street and had been diagnosed with testicular cancer, so I had missed a semester of law school getting relocated and irradiated (kind of like simulation training for nuclear war), and was making up part of the lost semester by taking a 4-credit Constitutional Law class that summer. The course was waking me up to a lot of injustice. Also, two weeks earlier, Saint Vincent’s had changed our uniforms, making us dress up in blue like cops, which I hated and had protested on the basis that it made us potential targets. I was in an ongoing battle with management over that. I was pissed off.

June 28 was a Monday. I was working a 7-3 tour with John Filangeri, a senior medic who had been on many high-profile calls like the Bernie Goetz shootings and the Joel Steinberg case. A call came in for an “unconscious, possible DOA” on the Lower East Side, and we went. I think it was a walkup, maybe the second floor. In a room that was brightly lit from a big window, a dead guy was lying on the floor. I vaguely recall that he was wearing a black leather jacket and not much else. It was an easy determination, as he had obviously been “down” for some time. No rigor yet, but he was already getting cold, and was beyond any attempt at resuscitation. After we pronounced, the cops stayed and waited for a basic unit to transport. Paramedics do not haul stiffs.

Later in the ER that day, I learned who G.G. Allin was. One of the nurses, Mary Malet, who also happened to be a lawyer and was active in the music business, told me about his on-stage antics. The feces-tossing thing seemed to be what everyone remembered. A claim to fame from a bit of shit.