She seemed like the nicest person in the world, and I miss her like a friend. Silly isn’t it? Celebrity deaths don’t usually bother me, but her’s made me cry. Yeah, I know – big fag. Can’t help it. Larraine Newman put it best in a comment shortly after Gilda’s death, “Sometimes, if you have a faith in God, you can evaluate it or see some lesson in it, but I’m having trouble with this one. I really am.”

Gilda grew up in Detroit, and so did I. As a young adult, I felt an affinity with her. You could even say I had a crush on her. I still do. She was someone you just wanted to know, and be “best friends” with. Weird, isn’t it? I guess I’m not the only one – Mike Myers said the same thing a while back. He did a commercial with her when he was 9 years old, and fell in love with her.

This is going to sound pathetic. I liked her so much that when I was done working at the now defunct Punch and Judy Theatre nearby that is now destroyed, I would drive to Gilda’s high school parking lot, sit in my car, and listen to the tape of her live show – with her talking about her high school days. 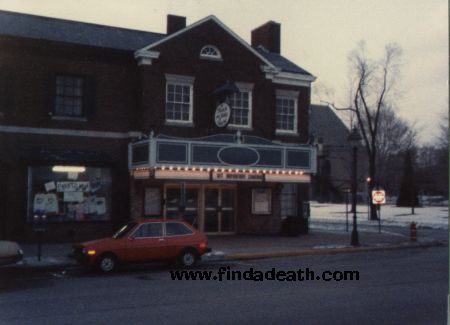 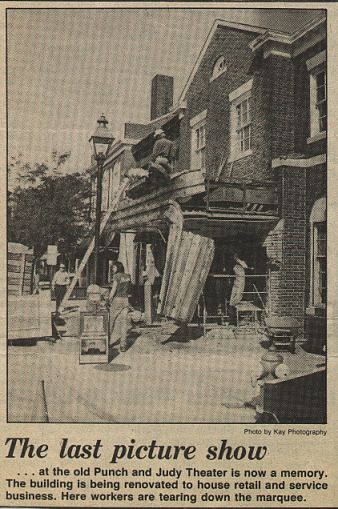 My eyes would well up, because I liked her so much. For some reason, I probably sensed vulnerability, and wanted to protect her. I know, I’m a sap. Funny thing is, I found out I was parked in the wrong school parking lot. After a bit of research, I found the right one. Okay, I’ll get on with it.

Did you ever see the film, Gilda Live? Though I never got to see her perform in person, seeing this film was the next best thing. I remember that the film didn’t have a major theatrical release in my area, so I had to drive out to the sticks (Dearborn, for God Sake!) to see it. It was magical. I purchased the audiotape of the show, and I wore my first copy out. I knew that Gilda went to University Liggett High School, in the ever-so-posh Grosse Pointe area. 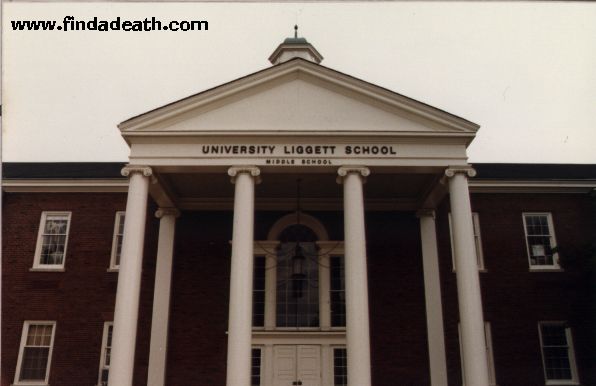 If you know Gilda Live, in her last story/song, she talks about her high school prom. She goes on about the transformation of the gymnasium, into a crepe paper fantasyland. Here is Gilda’s gym. This is the room where the prom was held. 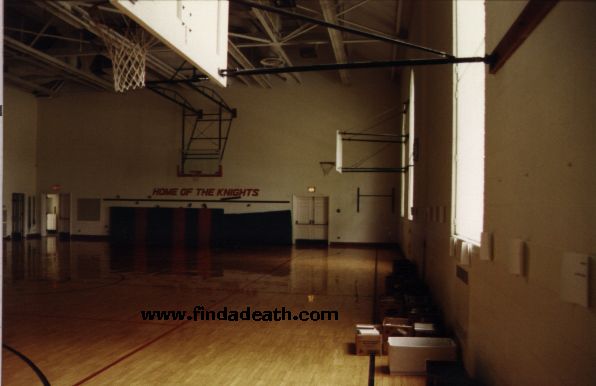 Findadeath.com friend JimEd sends us:  Gilda Radner was once briefly married to G.E. Smith, the former musical director for the Saturday Night Live band.  I saw “Gilda Live” a couple of times; it was absolutely hysterical. I’m having a hell of a time finding it on video, though.

I wrote Gilda a fan letter. She was kind enough to send me this postcard. I cherish it. 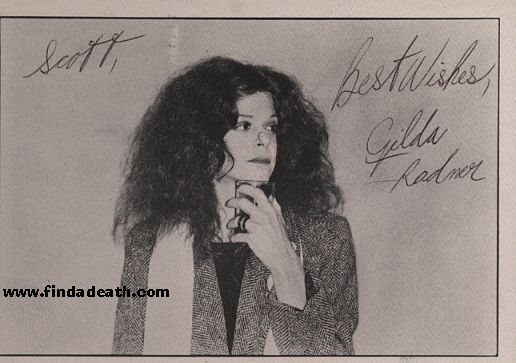 Gilda was diagnosed with ovarian cancer. Cancer ran in her family. It claimed her grandmother, her aunt and her cousin. She once said, “I’ve been having cancer premonitions since I was twelve.” Unfortunately, she was right. They say that if the doctors would have questioned her about her family history, they may have stopped the cancer in time.

She and her husband Gene Wilder were filming Haunted Honeymoon here in London, when the illness started showing symptoms. (By the way, I used to detest Gene Wilder, until he married Gilda. I thought that if she loved him, he must be a good person. I met him briefly about 2 years ago. Just a backstage door kind of thing – but when he looked into my eyes, there was a magic there too. I cannot explain it, but he just seemed good.) During the filming, Gilda was fatigued. Upon their return to America (they were living in Connecticut), she saw dozens of doctors who failed to diagnose the problem properly. In October of 1986 – one eventually did, and if you read her book, it was a painful ordeal, physically and emotionally. For both of them. She thought she had licked the disease –and was on the cover of LIFE magazine in March of 1988 – with the caption reading, “Wisecracking actress laughs in the face of cancer.” 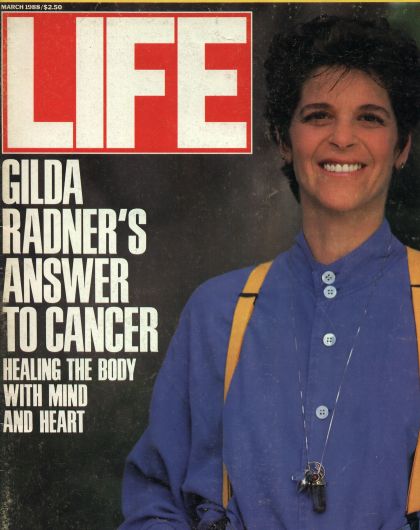 In the spring of 1988 – she made what was to be her last television appearance, on It’s Garry Shandling’s Show. It was a great cameo. Garry asked her where she had been. “I’ve been away from TV for awhile.” “Yeah, what happened?” “I had cancer,” she chirped brightly, “what did you have?” The future looked bright for her then. She was hoping to have her own television show, and was in discussions for it. She was also working on her autobiography, It’s Always Something. It began with her wedding to Gene Wilder, and concluded with her cancer treatment. She found solace in an organization called The Wellness Community. In May of 1988 – the cancer returned. She was mortified and embarrassed.

In December of 1988 – Gene and Gilda moved back to California. She and Gene (and their dog Sparkle) owned a house on Chalon Road, in LA. Here’s the house, and another shot of it, oh – and of course – her mailbox. 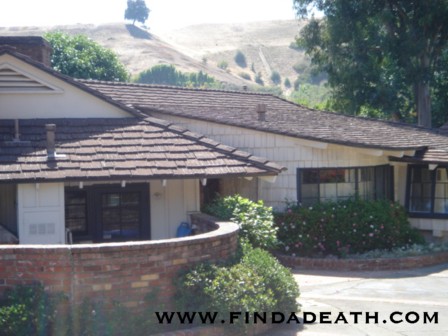 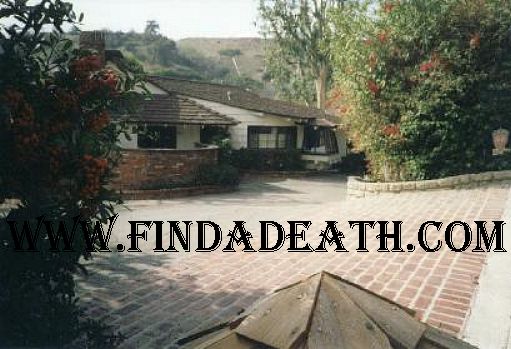 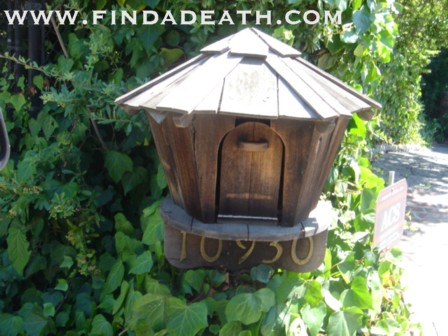 Thank you so much to Findadeath.com friends Mark Cramer, Lilieth Lawrence and Janet Schiessl for getting these photographs for us. Cheers, guys. You are the best.

Gilda saw the first hardbound copy of her book one week before she died. (I had a copy, but lent it to someone, and never got it back. Don’t you hate that? Funny thing is, I got another copy – a paperback – from O.J. Simpson’s garbage on Rockingham. It wasn’t his – he was in prison at the time – I’m sure it was his daughter’s.) 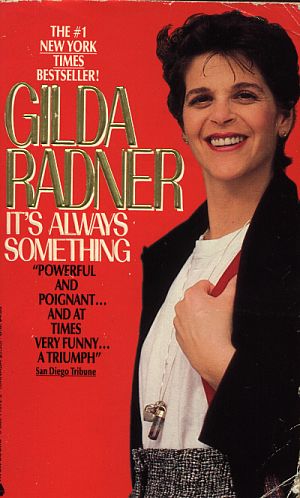 Gilda re-entered Cedars Sinai Medical Center (Thank you Terri Rios, for the photo) on Wednesday, May 17, 1988 for a CAT scan. 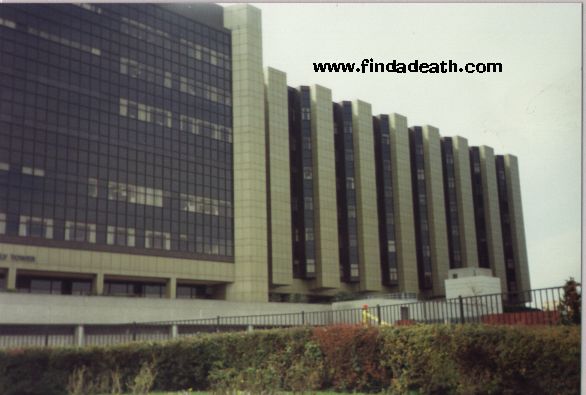 This is such a painful thing to read – an account by Gene Wilder,

“She went in for the scan – but the people there could not keep her on the gurney. She was raving like a crazed woman – she knew they would give her morphine and was afraid she’d never regain consciousness. She kept getting off the cart as they were wheeling her out. Finally three people were holding her gently and saying, “Come on Gilda. We’re just going to go down and come back up.” She kept saying, “Get me out, get me out!” She’d look at me and beg me, “Help me out of here. I’ve got to get out of here.” And I’d tell her, “You’re okay honey. I know. I know.” They sedated her, and when she came back, she remained unconscious for three days. I stayed at her side late into the night, sometimes sleeping over. Finally a doctor told me to go home and get some sleep. At 4 am on Saturday, I heard a pounding on my door. It was an old friend, a surgeon, who told me, “Come on. It’s time to go.” When I got there, a night nurse, whom I still want to thank, had washed Gilda and taken out all the tubes. She put a pretty yellow barrette in her hair. She looked like an angel. So peaceful. She was still alive, and as she lay there, I kissed her. But then her breathing became irregular, and there were long gaps and little gasps. Two hours after I arrived, Gilda was gone. While she was conscious, I never said goodbye.” 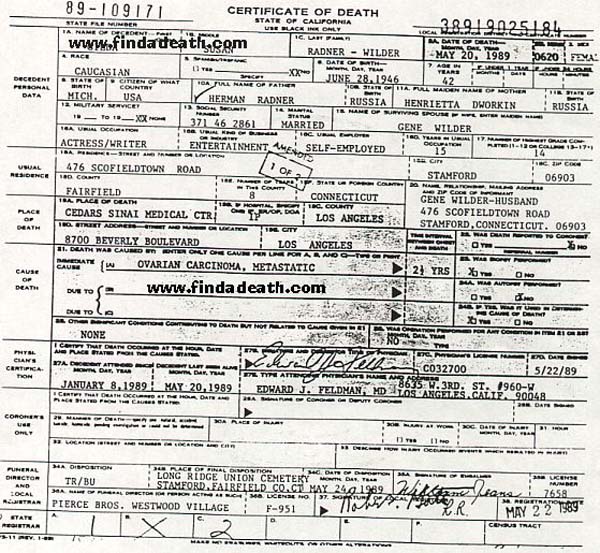 On May 24th, there was a small private funeral for Gilda, back in Connecticut. It rained that day.

Family members requested that in lieu of flowers, donations be sent to the Wellness Community.

On March 31st, Gilda gave what was to be her last interview, for Glamour magazine. About her husband, she said, “He’s never broken down and cried. He’s always had this total confidence that I would be well. I’ve never seen fear in his eyes.” She also added, “I sat down and told him, “You have handled this about the best anyone could. After I finish the book, every woman in the world will be after you. The trouble is, they’re all gonna have some major disease.”

After her death, Wilder took it upon himself to warn others about detecting ovarian cancer early. On October 17th, 1993, Gene opened Gilda’s Club, in New York. 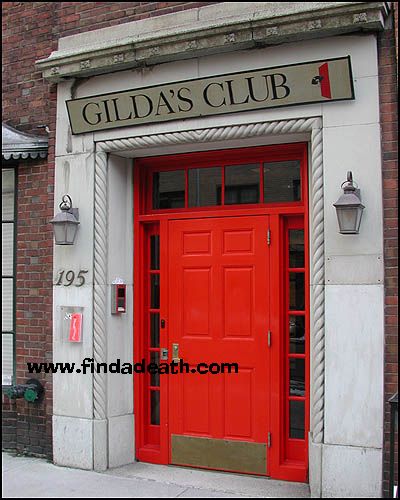 A psychological and social support facility, very much like the Wellness Community, for cancer patients and their families. There are now branches all over the world. It is her legacy.  Thank you to Kevin Fitzpatrick for that photograph.

Even more tragically – Gene Wilder is himself now suffering from lymphoma.  According to Findadeath.com friend Kevin Kusinitz, he is hospitalized at Manhattan Sloan Kettering Cancer Center. He was admitted the week of February 7th. 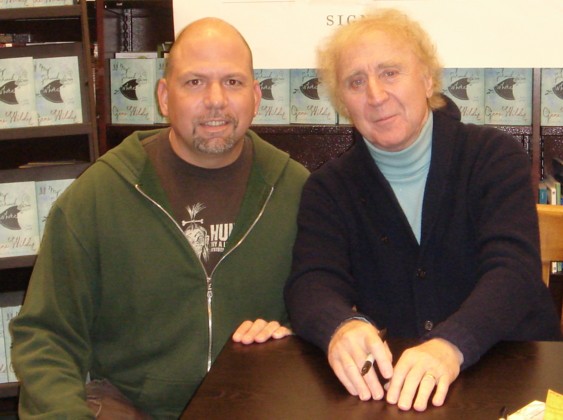 There was a great article written about Gilda shortly after her death. It just reaffirms how nice she was. If you are over sapped now, skip it, but if you want another dose of it, read this article. 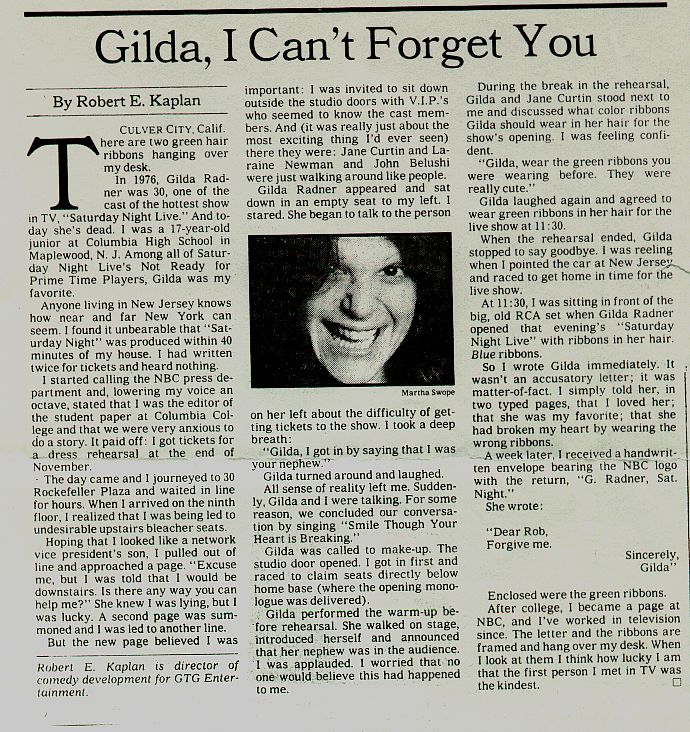 Findadeath.com friend Gene Miller sends this in:  “One of the best comments on her passing came from of all places, the Bloom County comic strip. Opus the Penguin said: “Gilda Radner isn’t supposed to end.”  True.

JUNE 2000: Gilda’s dad used to own a hotel in Detroit, called the Park Shelton. 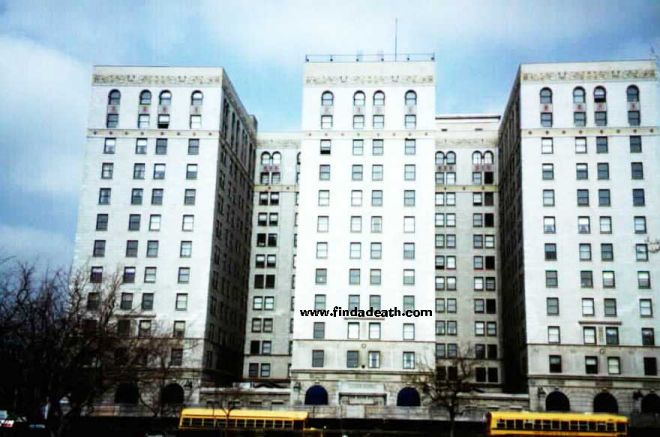 My nephew Richard Michaels III lives in an apartment there now, and kindly contributed this photograph.  Thanks, Rick!

Thanks to Findadeath.com friend Bob Gary, I have now seen the E True Hollywood Story that aired, about Gilda.  It was great, and the home movies were fantastic.  Thanks so much, Bob.

Have you ever read the book, Bunny Bunny, by Alan Zweibel? Alan was a good friend of Gilda’s, and even helped develop some of her characters. This book documents their friendship. It is heart breaking and wonderfully funny at the same time. I like to think that it was the real Gilda – just who I expected her to be. I’ve always meant to write him a letter saying how great a book it was, but I never have. One of his quotes – and I hope he forgives me, sums it all up magnificently. “I don’t know why God makes people and them takes them back while they’re still having fun with the life he gave them in the first place. Even as her body grew to betray her, spirits just don’t die. And that’s what Gilda was. Even as an adult, she was still a little girl who believed in fairy tales and that if she said, “Bunny Bunny,” on the first day of every month, it would bring her love, laughter and peace. Well Gilda, this is June 1st and if you’re in a place where you can’t say it, I’ll say it for you – “Bunny, Bunny” and I hope you’re okay. I’m gonna miss you.”