I’m one of the people that believes in romance and I don’t think that that has any age, and somehow in Hollywood it does have.
As Daddy said, life is 95 percent anticipation.
When I die, my epitaph should read: She Paid the Bills. That’s the story of my private life.
After 16 years in pictures I could not be intimidated easily, because I knew where all the skeletons were buried.
Life and death. They are somehow sweetly and beautifully mixed, but I don’t know how.
The first feminine feature that goes, with advancing age, is the neck.
Fame was thrilling only until it became grueling. Money was fun only until you ran out of things to buy.
Writing the story of your own life is a bit like drilling your own teeth.
All creative people should be required to leave California for three months every year.
Your body is the direct result of what you eat as well as what you don’t eat.
Show More Quotes
Show less

I have to preface this story with a disappointing statement.  I’ve poured through all of my books and files, and cannot locate a single obituary for this woman.  I don’t know what happened to it, so if anyone can help with details, I would be most appreciative.  Drop me a line with funeral arrangements etc.  Thanks.

Findadeath friend, Jeffrey Brown sends us this link to an obit.  Thanks Jeffrey!

During her life, Gloria Swanson had been married six times, and divorced 5.  Her last marriage was in 1976, to writer William Dufty. He also went under the name Duffy.

Gloria was in one of the greatest films ever, Sunset Boulevard, with William Holden.  She was also in Airport 1975 – which was FANTASTIC.  She played herself and she was penning an autobiography when Karen Black had to take over flying the plane.  She tossed her diamonds out of her jewelry case and stuffed her taped notes into the box instead claiming, “It’s bombproof, the insurance people insisted upon it.”  To steal a joke, it’s the only thing in that film that was bombproof.  I love it, but not as much as I loved her on The Beverly Hillbillies.  Sorry to go on. 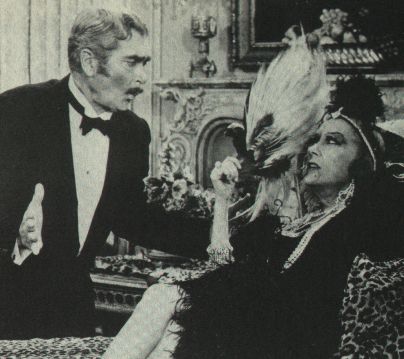 History:  Sometime in 1927, Gloria put her footprints in cement, in the forecourt of the Chinese Theatre. 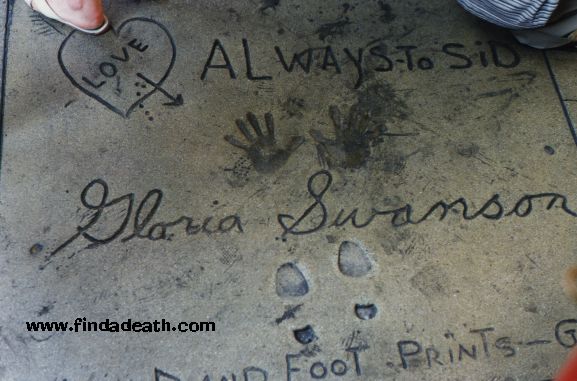 It’s common knowledge that Gloria was doing Joe Kennedy for years, and according to legend – they used to meet for trysts in the Castle Argyll, in downtown Hollywood. 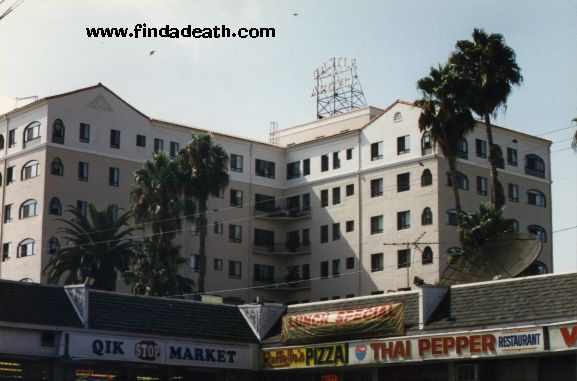 I have to thank our friends of Findadeath.com – Stacy Weinstein (with the very cool mom) and Joanne Melito for their fantastic photographs of Ms. Swanson’s home.  Gloria was living in an apartment at on Fifth Avenue, in Manhattan. 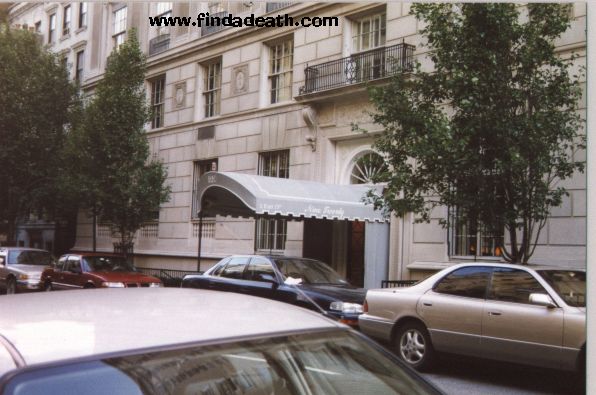 Her building was number 920. 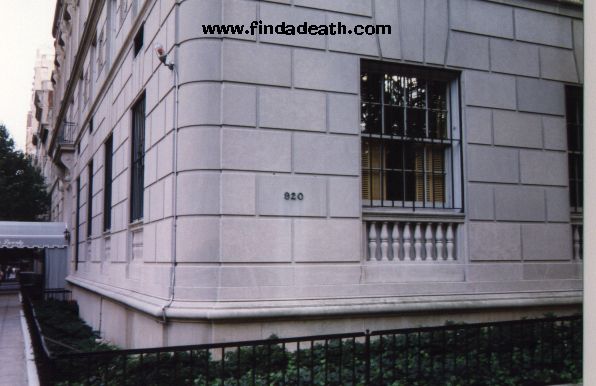 Here’s the front door, with the handy, ready to serve doorman standing by, 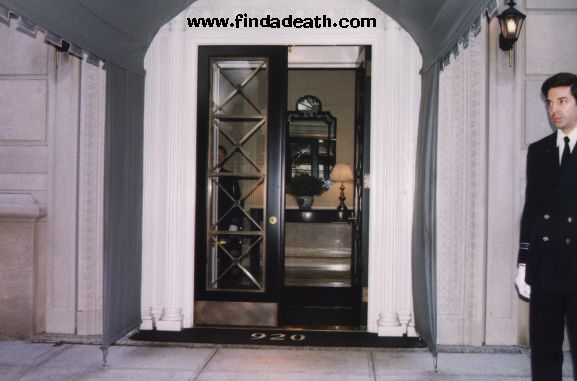 and no doubt Ms. Swanson lived in one of these apartments. 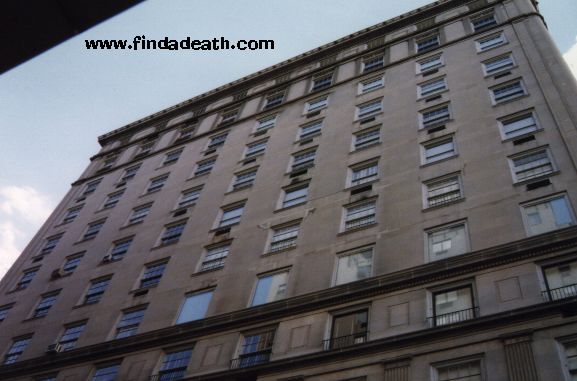 Thanks, Stacy and Joanne!

She was admitted on March 20th for treatment of what was said by a friend, a minor heart attack. 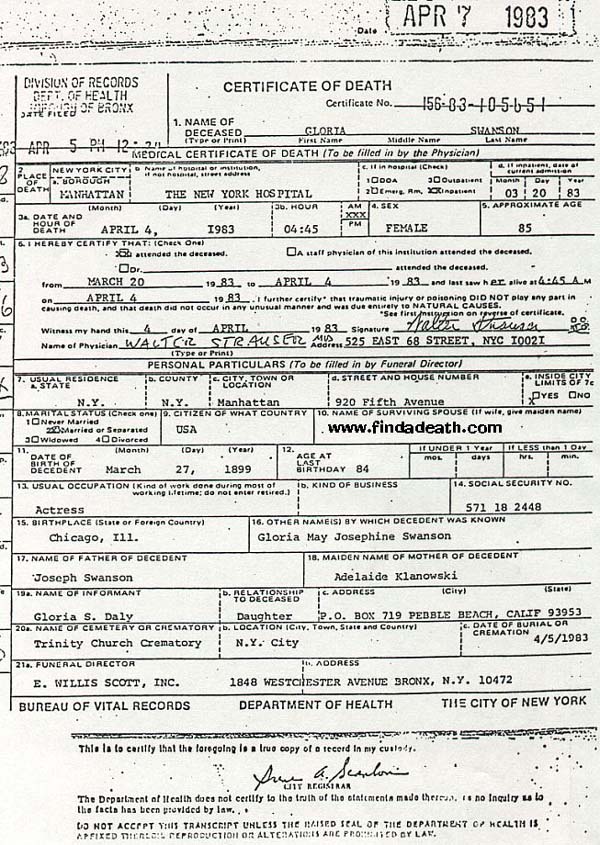 In her will, she specified that she be cremated, and the service be private and confined to family members only, and there be “no public funeral or display of any sort.”  She was indeed cremated, on April 5th, a Tuesday.  She is interred at the Church of Heavenly Rest, in New York City. Thank you to Bob Siler, for the great details.

Trivia:  Gloria was insane about the use of sugar.  I mean she would go ballistic if someone used it around her. She claimed that America lost the Vietnam War because of sugar.  Her last husband, William Duffy, wrote a book called, “Sugar Blues.”  It is the history of sugar and contains some personal insightful confrontations with sugar, experienced by the author.  Thanks for Findadeath.com friend, RM for that tidbit.  I remember reading a story about someone who hated her guts, sending her a baby casket filled to the rim with sugar.  That took a lot of thought.

This was sent in by Findadeath.com friend, Kevin Kusinitz:    Another piece of trivia for your files. “Sugar Blues,” the book by Gloria Swanson’s husband, was a favorite book of John Lennon’s. Apparently, he’d hand out copies of the book the way Henry Ford did “Protocols of the Elders of Zion.” Lennon, like Gloria, was sure that sugar was the curse of the world. Of course, Lennon chain-smoked moccasin-like French cigarettes and downed about 20 cups of espresso a day. Real health nut, that Lennon. Thanks Kevin!

Gloria’s husband received nothing in her will.