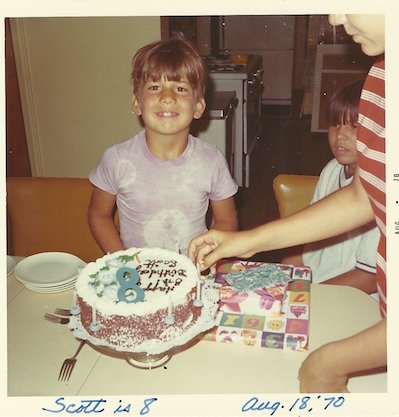 Oh, you can definitely go back, but it’s going to hurt.

I was home for Christmas 2007.  We had a great holiday.  I love spending time with my family and seeing old friends.

My Godfather/Uncle Andy – he died a month earlier.  I have only one uncle left.

What’s up with this:  When I was growing up, my grandparents were in their mid-80’s and we didn’t have a care in the world.  We didn’t think they were going to drop dead at any minute.  It didn’t seem like my folks were worried about it either.  Everyone was pretty happy.

Both my parents now are 78 and every time my phone rings from their number, I think, “Is this THE CALL?”  Seems like everything was so much more lighthearted in the 60’s.

The neighborhood where my folks grew up is gone.  This was a massive Polish community who were largely gone.  Dead or deserted.  General Motors paid home owners around $3000.00 to abandon their beautiful brick duplexes and built a massive assembly plant. Adding insult to injury, they nicknamed it the “Poletown” plant… and are closing it down. 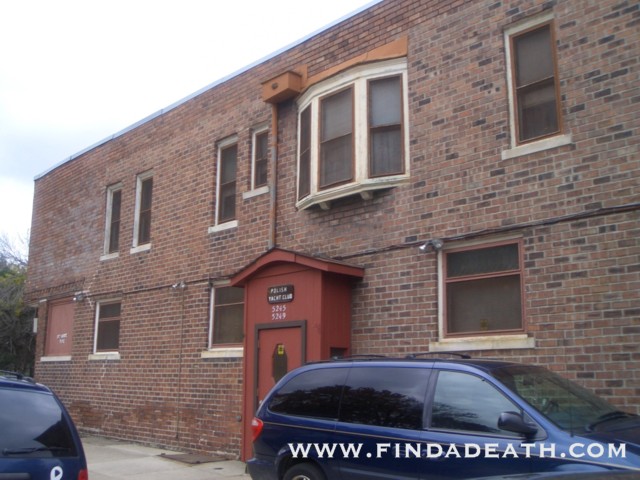 This restaurant is where my sister and a close friend of our family and myself spent a very lazy (read BOOZY) afternoon. 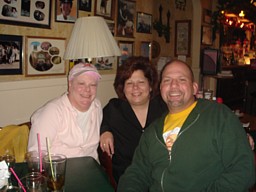 My Aunt Anne and Uncle Andy used to live nearby.  This is an unglamorous but intact photo of the house in the 1980’s.  My relatives were long gone by then. 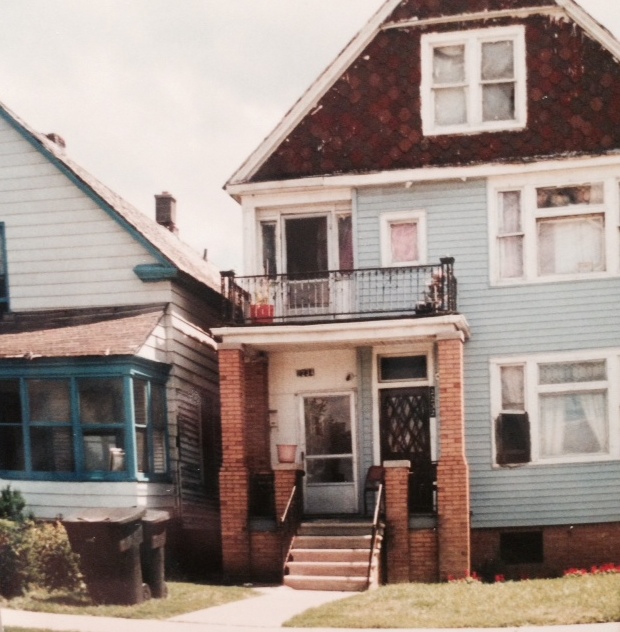 So after lunch, just for shits and giggles, we decided to see what was left of  my Aunt and Uncle’s half-standing burned out house.

Bit of background: The house used to stand on the other side of I-94, but when the freeway was built, my Uncle’s father (we called him Dzadza (DJah-DJah) had the house moved across the freeway to where the ruins stand today.

In the back yard there was a boat. Yes.  A boat. MILES from any water.

We used to play WHAT TIME IS IT MR. FOX?!? on that sidewalk.  You may take 5 scissor steps! 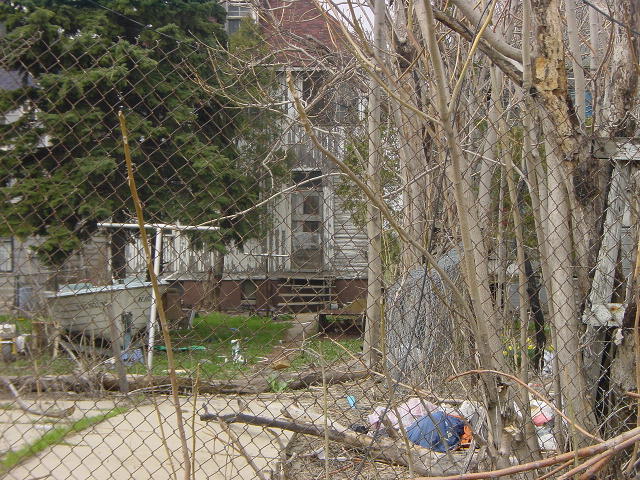 Well, this was a shitty thing to see. 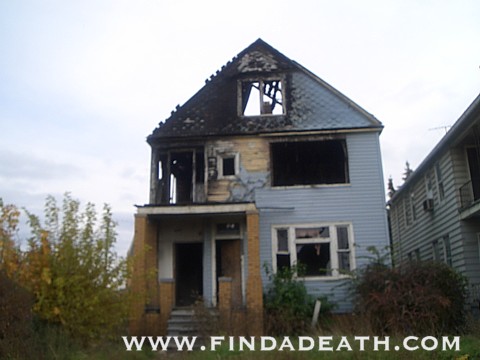 So of course I hoisted my way up into the back porch (any steps were long gone) and made my way into the kitchen.  I remember this kitchen so well, and what a scream to see it today.  A fire had ravaged the place and anything worth taking was long gone.  In the bathroom my Aunt Anne had a furry leopard print rug and toilet seat cover to match her leopard Faberge powder puff on the back of the toilet. 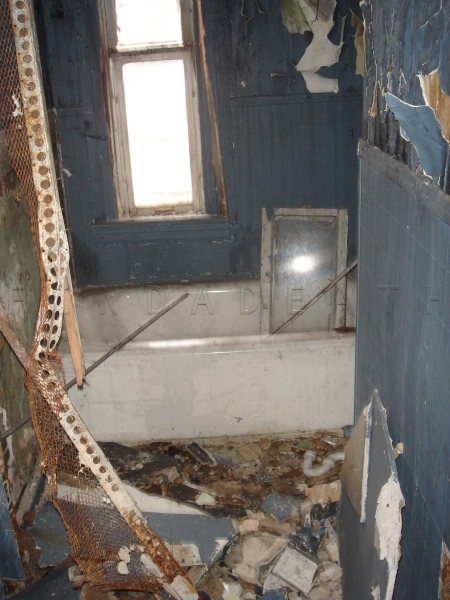 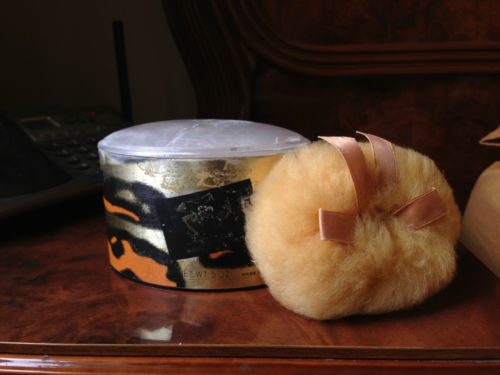 This is where where the birdcage used to hang in the kitchen. 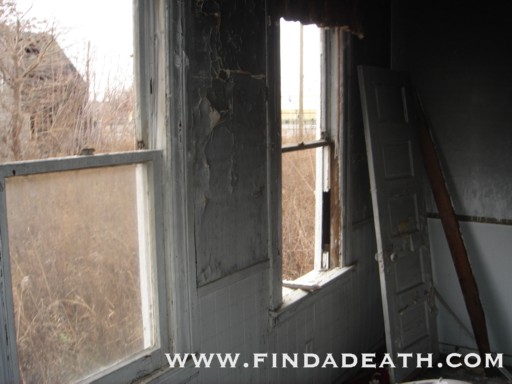 This is where the Christmas tree was in the living room, a choice of one or two places.  Switching it up. 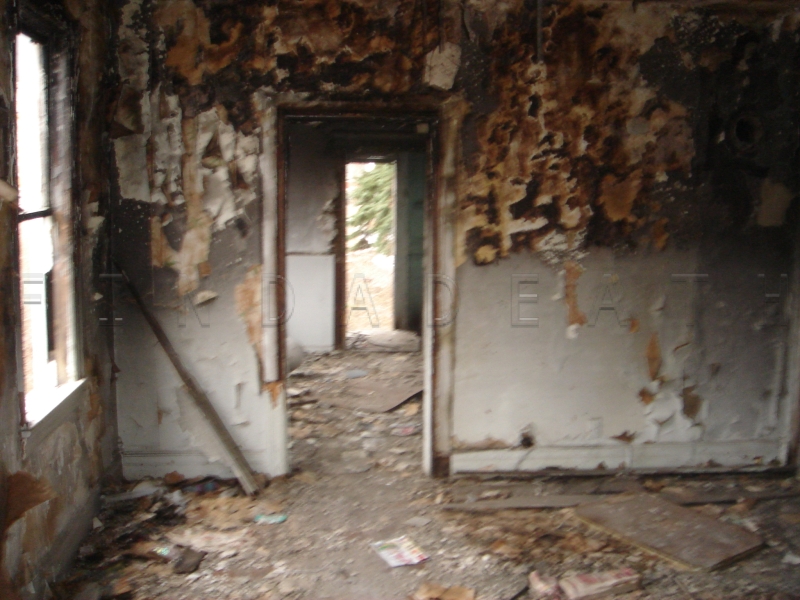 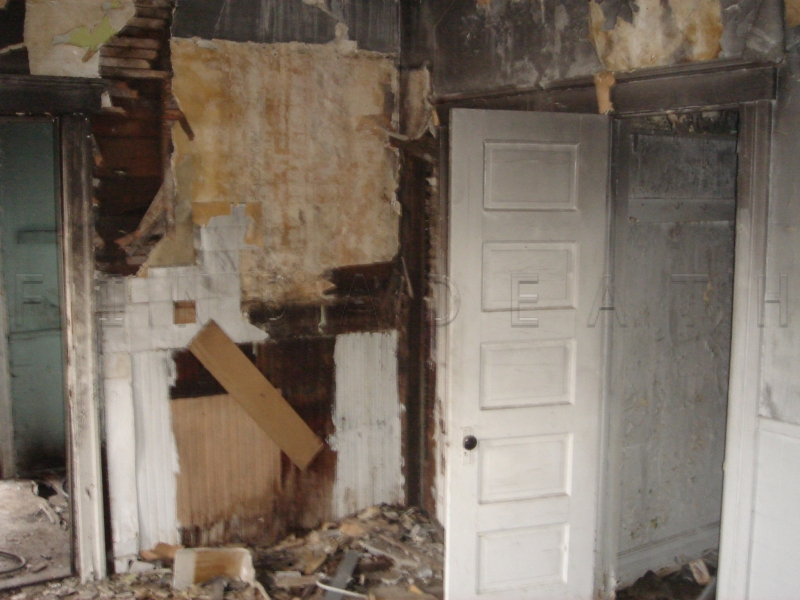 My cousin Andrea had the best games in the world, and kept them on a particular shelf in her bedroom closet. 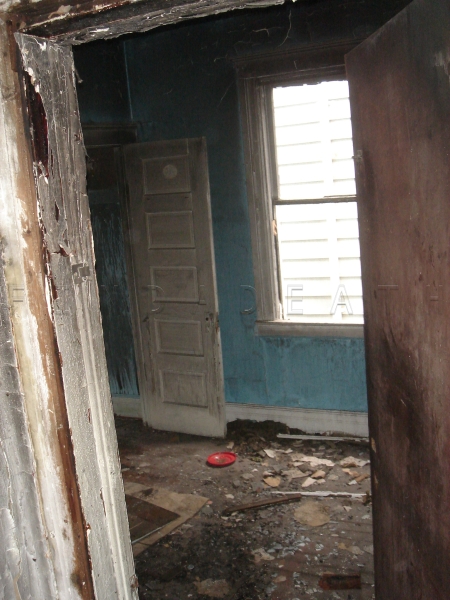 Going back to that exact same shelf – so many decades later – was so sad.  But I am so glad I did it.

How often do you actually get to step back in time?  You might not like what you see, but I had to. 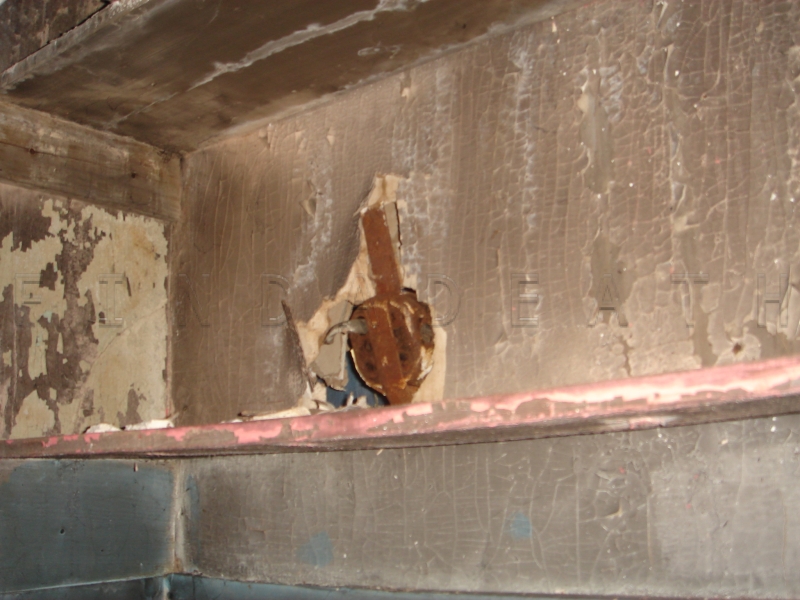 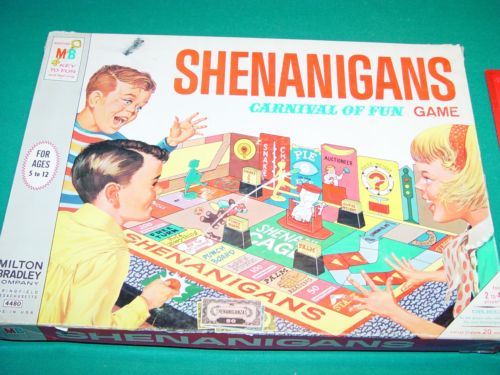 Over Christmas, I felt a little weird about mentioning it to my cousin Andrea.  I mean, this was the house where she grew up, plus dad had just died.  But I did mention it.  I showed her some of the pictures I took and told her I planned to go back.  I asked her if she was interested in joining me.  I was surprised when she agreed.  My brother (who is often up for an adventure like this) and I went back with Andrea the next day.

I went straight back to the basement, hoping I’d overlooked something, but disappointingly found nothing except for those fucking scary basement steps with no backs, and the coal room. 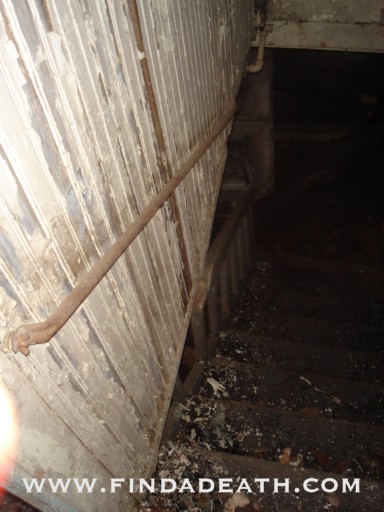 Did any of you guys have a coal room?  Scariest damn place in the world. 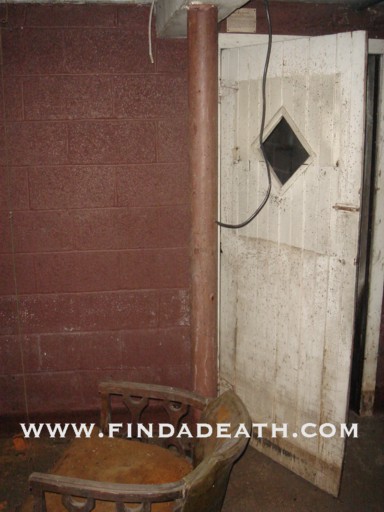 Andrea didn’t want to venture into the house, but she did go to the backyard and dug up a rose bush.  I hope it takes.  I wanted a keepsake so I tried removing a light switch, one of those old push button ones.  My brother got that light switch for me.

I am happy and treasure it. 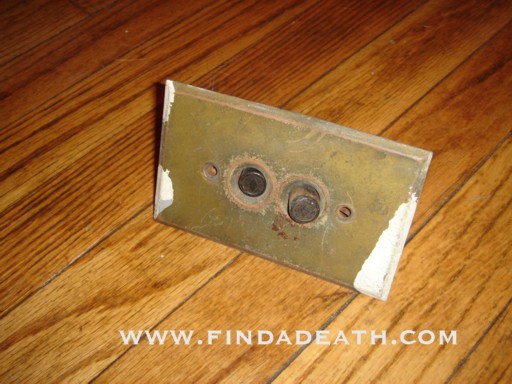 I don’t blame Andrea for not going in.  Some things, especially when it’s close to home (her home), are left best for memories.  But I’m the kind of guy that needs to see.  No matter how ugly, I want to see it, and if possible, to experience it.  So, that’s one of the things I did on my Christmas Vacation. 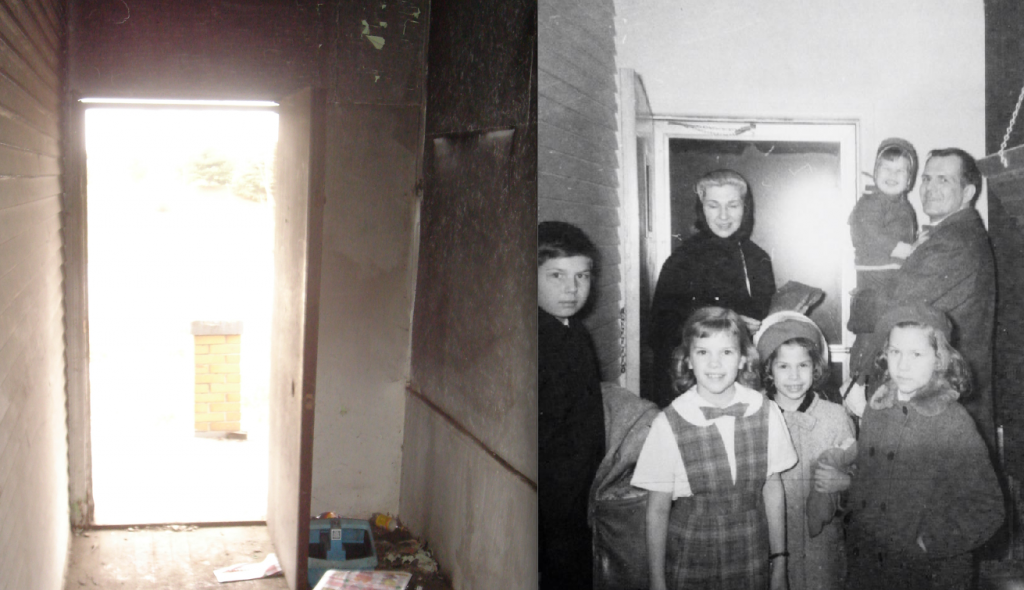 Happier Times In That Hallway 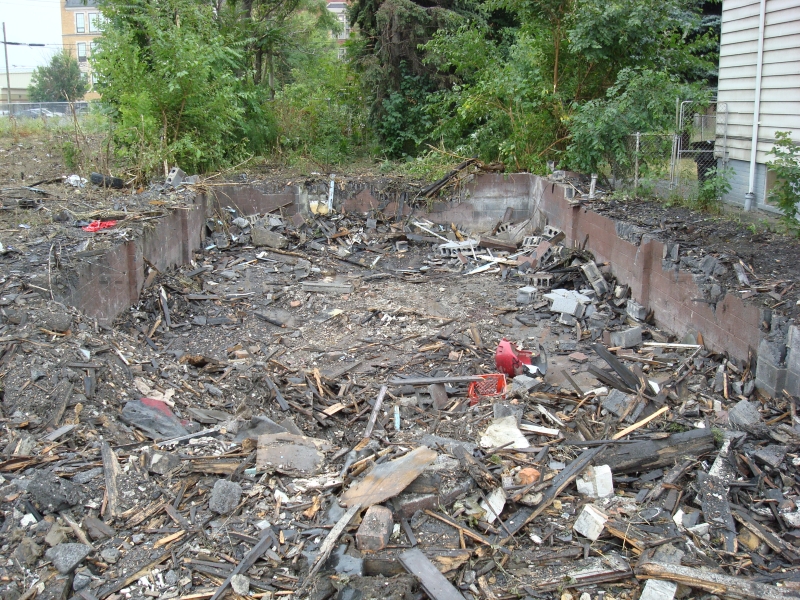 Take me back to leopard print Faberge powder puff, please.

You can go back, but it’s gonna hurt.