The easiest way to attract a crowd is to let it be known that at a given time and a given place someone is going to attempt something that in the event of failure will mean sudden death.
What the eyes see and the ears hear, the mind believes.
To cause the face to appear in a mass of flame make use of the following: mix together thoroughly petroleum, lard, mutton tallow and quick lime. Distill this over a charcoal fire, and the liquid which results can be burned on the face without harm.
A common pickpocket trick is for the operator to carry a shawl or overcoat carelessly over the left arm, and to take a seat on the right side of the person they intend to rob in a streetcar or other vehicle.
I am a great admirer of mystery and magic. Look at this life – all mystery and magic.
In all feats of fire-eating it should be noted that the head is thrown well back, so that the flame may pass out of the open mouth instead of up into the roof, as it would if the head were held naturally.
I think that in a year I may retire. I cannot take my money with me when I die and I wish to enjoy it, with my family, while I live. I should prefer living in Germany to any other country, though I am an American, and am loyal to my country.
I make the most money, I think, in Russia and Paris, for the people of those countries are so willing to be amused, so eager to see something new and out of the ordinary.
It is not unusual for the eye or ear to play tricks with one, but when such illusions and delusions are taken for the Spirit forms of the departed and voices of the dead instead of being recognized as some subjective phenomena brought about by a physical cause, the situation takes on a grave aspect.
My professional life has been a constant record of disillusion, and many things that seem wonderful to most men are the every-day commonplaces of my business.
Show More Quotes
Show less

On October 22 of 1926, The legendary performer, whose real name was Ehrich Weiss, had a show scheduled at the Princess Theater in Montreal. Later, in his dressing room, a McGill University student, J. Gordon Whitehead (whatever happened to him?), who was reputed to be a school boxing star, asked Houdini if it were true that he could take any punch to the abdomen. Houdini was sitting on the couch half-listening, and mumbled a yes. As he stood up, Whitehead hammered 3 punches into his belly before Houdini was able to prepare for the blow.

That evening and the next he continued his performances with much discomfort. He then endured a 1000-mile train ride for a 2-week engagement in Detroit, to perform at the Garrick Theater. 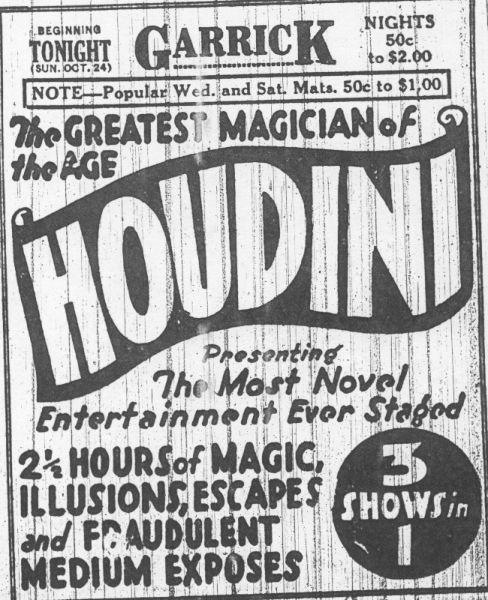 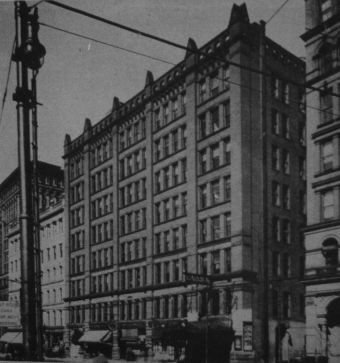 The pain failed to subside, so he wired ahead for his manager to have a doctor waiting at the theater to examine him. Through sheer willpower, he persevered (with a 104-degree temperature) until his final act. When the curtain fell, he collapsed. He was rushed to the nearby Grace Hospital, and diagnosed with a ruptured appendix. An operation was performed, but peritonitis set in. He had one more operation, but again failed to respond. His last words were, “I am weaker. I guess I have lost the fight.” 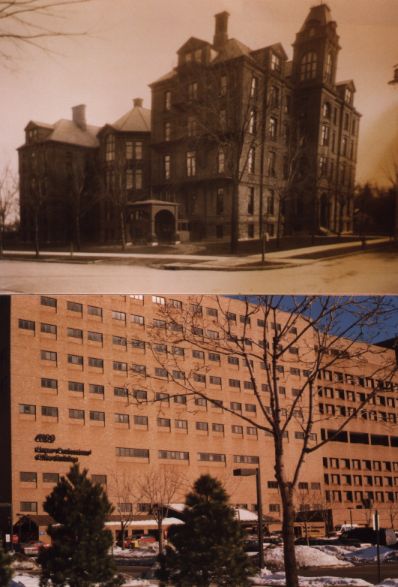 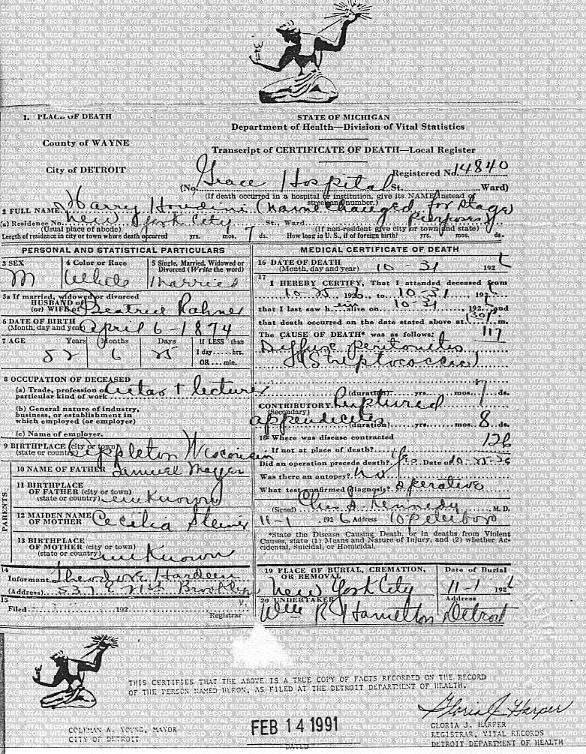 Apparently, according to FAD friend Karen Hunt,  Grace Hospital was quite historic, built, I think, during the Civil War, was torn down in the 1970s. The “now” photo of the building is a completely different building than the one in which Houdini died.

His body was taken to the funeral home of W.R. Hamilton and Co., 3975 Cass Avenue. 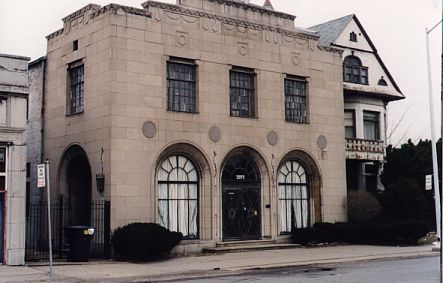 No one had been permitted to view the body.

He lay in a great cumbersome coffin that he had built just 4 weeks earlier, specifically to use in his stage presentation. It was for a trick. It was a dull bronze with a full-length glass top. It had been lined with silk, during the last day in Detroit. By a coincidence, the coffin, which he specified in his will should be used for his burial, was left in Detroit when the large amount of paraphernalia used in the show was shipped to New York. Through an oversight, the coffin was left in a warehouse of the Detroit Transfer Company, and not discovered until some time after the other articles had been shipped.

A special Pullman car had been added to a train called the “Detroiter”, to take him from Michigan Central Station Monday night. A truck rumbled toward the baggage coach on which was a long box. Mrs. Houdini arrived in a wheelchair, in shock since her husband’s death. The private car carrying the Houdini party in addition to Mrs. Houdini included the magicians two brothers, Theodore Hardeen and Nathan J. Weiss, Miss Julia Sawyer, a niece, Miss Julia Karchere, a cousin of Mrs. Houdini, H. Elliot Stuckel, Houdini’s manager, James Collins, a confidential, technical director and a nurse.

He was buried in Machpalah Cemetery, just inside the front gate, next to his mother who had died in 1913.

8 months after his death, his widow received a check for $50,000. It was a double indemnity/accidental death award. Every cloud…

He promised his wife if there were any ways possible to communicate with her from the dead, he would. For years she held séances trying to reach his spirit. The last séance was at the top of the Knickerbocker hotel in Hollywood, on the 10th anniversary of his death. 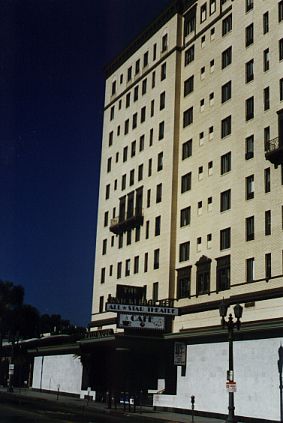 It failed. Contrary to legend, Mrs. Houdini did not jump from the roof. She died aboard a train, taking her to New York, from Needles, California, on Feb 11, 1943. She was 67 years old.

On the 50th anniversary of his death, a séance was held in the very room where he died, again with no avail.

On April 10, 1975 vandals smashed the marble bust atop his grave and it lay in disrepair until it was repaired thanks to a donation for $10,000 from his fan, David Copperfield.

December 13, 2001, my friend Mark Cramer sends this picture of the Houdini Museum in Appleton, Wisconsin. 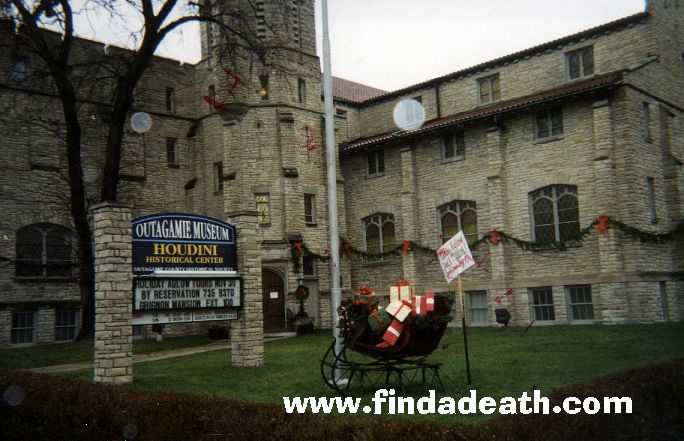 It houses an impressive exhibit on the late entertainer (actually born in Hungary, but his adopted hometown of Appleton was incorporated into his biography to make him seem “American”.  He was raised in Appleton for several years.  The museum is called the Outagamie Museum, because Appleton is in Outagamie County.  Thanks Mark!

January 2, 2002 – another Findadeath.com friend sends this in:  The picture you have of the Houdini museum, has, as I am sure you noticed, two distinct spots. According to people into the supernatural, it suggests something is hanging around. I believe the spots are called orbs and are produced by spirits. Maybe it was just something on the film or the flash, but still worth noting.

March 6, 2002 To which Mark Cramer responds, “Had to laugh when I read comments on FAD regarding the orbs in the picture that I sent to you of the Houdini Museum. Those “orbs” are raindrops on the lens of the camera as it was raining that day. They have nothing to do with Houdini’s spirit.”

An excellent Houdini reference page was put together by my buddy Bob King. Do check it out here:

To learn more about the legend of Houdini’s death, go here.