What became of Elvis Presley’s hearse? 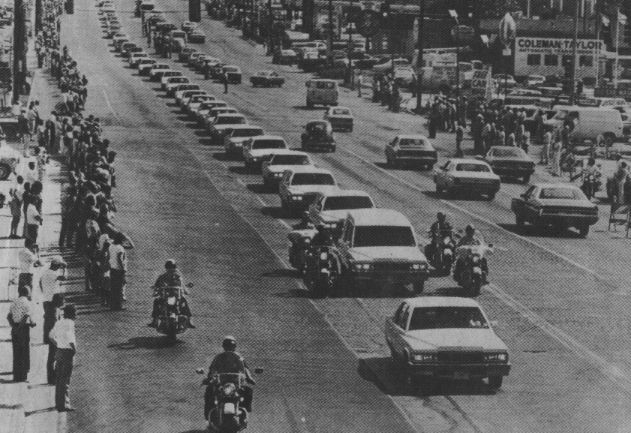 On 18th August 1977, after a private service inside Graceland, Elvis’s body was placed in a gleaming white 1977 Miller-Meteor Landau Traditional Cadillac hearse. Then, a brilliantly shining silver Cadillac limousine led the procession, followed by sixteen white Cadillac limousines carrying the mourners to the Memphis Cemetery.

What happened to the hearse used in Elvis’s funeral?

My name is Chuck Houston, President of Houston Brothers, Inc., a funeral car dealer in Marietta, GA. Around 1984, I was the last person to drive the hearse that carried Elvis to his grave. Our Company, then known as Crain S&S Sales which my father owned, bought, sold, leased and traded cars with SCI. He did so for many years. He originally sold the car new to SCI. We came back into possession of Elvis’s hearse when Memphis FH updated their rolling stock.
We were loaning the hearse to a funeral home in South Florida until their newvehicle was ready for delivery. My father was reluctant to loan the car out. He wanted to hang on to it, the only car he ever wanted keep in 50 years of business.
The funeral home in Florida was one of his biggest customers and needed a white/white loaner desperately. Elvis’s hearse happened to be the only white hearse on the lot. Another employee and myself, both of us about 21 at the time (we were going to drop off the car and then spend a few days of spring break in Ft. Lauderdale) took off toward Miami on I-75 around 7:00 pm. Around 10:00 we ran out of gas just north of Valdosta, GA. What was odd is that a tank of gas in those days would carry you from Marietta, GA to the Live Oak exit in Florida with gas left in the tank. That was based on the many, many cars my friend and I delivered to the south Florida area in the early 80’s. Therefore we never checked the gas gauge until we were in the vicinity of Live Oak.

After running out of gas, we walked about two miles to the next exit, bought a can and some gas and started back up the north bound return ramp toward Elvis’s hearse. Before reaching the highway a Lowndes County Sheriff stopped us, asked where we were going and called us a cab. We got her going again and headed for the gas station to fill her up. Heading south again, we were on our way. Just as the weigh station (the last one on southbound 75) came into sight the engine cut off. I dropped her into neutral while traveling around 65 mph and turned the ignition. When I did, fire shot out from under the hood on both sides. I eased her to the shoulder next to the weigh station return ramp and my friend and I jumped from the hearse as the fire engulfed the front end of the hearse.

My friend and I met at the rear of the car and realized all of our possessions were in the rear of the hearse and the doors were locked. We couldn’t get back in the front to retrieve the keys due to the fire having already spread. A truck driver
appeared with a fire extinguisher but it was too late. Neither of us wanted to get close for fear the hearse would blow up. So there we stood and watched as Elvis’s hearse went up in flames. A fire truck finally arrived and all they could save was the rear quarter panels, the rear door and bumper. Twin Lakes Towing picked the hearse up around 2:00 am and carried it to their lot. The D.O.T. Enforcement Officer carried us to the Ramada Inn.

The next morning we caught a cab over to Twin Lakes Towing and waited for our wrecker to show up from Marietta. While waiting at the towing co. all I could think was that I burned up Elvis’s hearse and my dad was going to kill me. The remains sat on our back lot (Hwy. 41 / Cobb Pkwy) until 1989 when it was finally put through a car crusher and hauled off. My friend and I sat there and watched as it was crushed. Other than the VIN, the hearse was identifiable by the number on the lower right hand side of the rear window. I can’t remember the number at the moment but I want to say seven. The number is visible on some of the footage of Elvis’s funeral. There is one scene where the hearse is turning left when it is plainly visible. The number sticker was still on the vehicle the day it was crushed. Out of the
thousands of hearses my father has sold over the years, this one was special. We always say that Elvis didn’t want his hearse to end up in south Florida.

One thought on “Hearse Story”