I never want to grow sick or old.

Be careful what you wish for.  Jack was an award winning Broadway, television and film actor through most of his life. He made his stage debut in Something For the Boys.  At the time of his death, he was better known as being the ex husband of Shirley Jones, and the father of dream boys David and Shaun Cassidy. 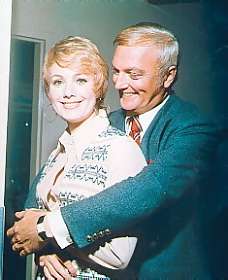 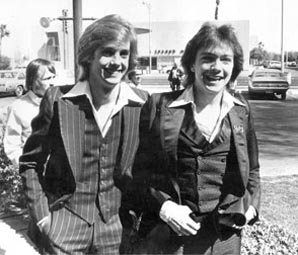 Shirley and Jack divorced, but seemingly still held a candle for each other.  In February of 1976, Jack gave an interview in which he said,

“Oh I still love Shirley…  If I had worked at the marriage, we wouldn’t be divorced today.”
Shirley Jones said in a recent interview, ” He wanted to come back to me right up until the day he died,” she said. “And I wanted him. That’s the terrible part. Much as I love Marty (Ingels) and have a wonderful relationship – I’d say this is Marty were sitting here – I’m not sure if Jack were alive, I’d be married to him.”

Jack became a fixture television actor appearing in just about every 70’s program including Bewitched and Columbo.

His death brought him an unexpected new batch of fans.

Jack owned the building he lived in, in West Hollywood, which has the third largest gay population in the USA.  Jack’s maxi pad took up the entire top row of balconies in this building. 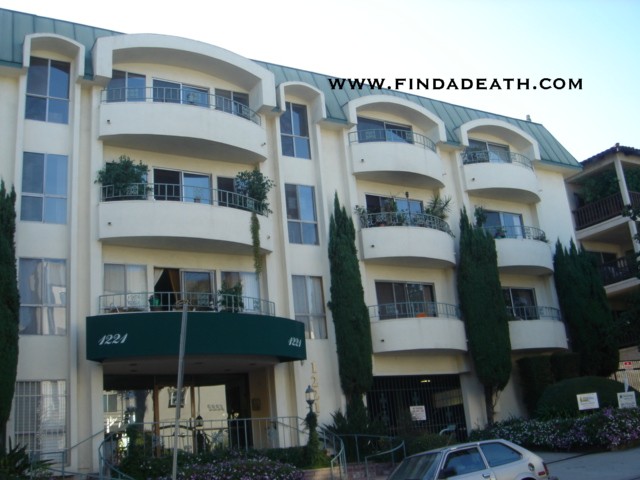 On December 12, 1976, after a hard night of partying – a Christmas party and bar hopping (with party animal Nanette Fabray no less) – he returned home.  He was probably fairly intoxicated.  Not wanting the night to end, my guess is that he made himself a drink and sat down on the sofa in front of the fireplace.  Around 5am he dozed off with a cigarette in his hand.  Next thing you know the building, and Jack, went up in flames.

The entire top floor was on fire, and the building had to be evacuated.  Neighbors were milling around the street like zombies.  Five Fire Department vehicles showed up to put out the blaze.  One woman had a heart attack in front of the place, and one firefighter had suffered smoke inhalation and was taken to the hospital. 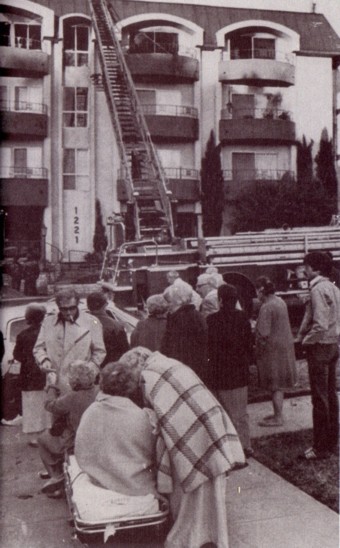 The charred remains of one person was discovered just inside the door of the apartment. 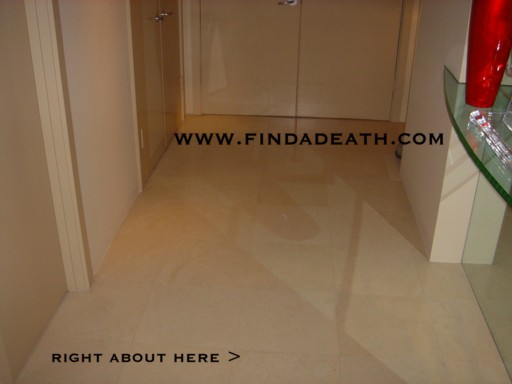 Jack’s car was missing, so it was thought that he was possibly out of town and one of his friends was staying in the place, but dental records and an apparent signet ring and religious bracelet positively identified him as Jack.

After the fire was controlled, decedent (Jack Cassidy) was discovered lying on the floor in the living room near the porch. Fire Dept. personnel pronounced death at 0615 hours. Decedent was charred.

It was surmised that fire was possibly caused by cigarette which started from the sofa in said living room. The whole unit was burned.

A co-tenant state to LASO investigator that he heard music coming from the scene at 0510 hours.

The scene is occupied by one Jack Cassidy, an actor and president of Richmond Hill Productions.

LASO Dep. Gleason will attempt to get dental chart of Mr. Cassidy.

Not known if decedent was drinking liquor but there is a liquor bar in said living room at scene.

His body was taken to the Coroner as John Doe 257

The body is that of a completely charred male that weighs 131 pounds and measures approximately 69 inches in height.  The age of the body is difficult to assess but it appears to be muscular and appears to be about the stated age of 49 years old.  The bony structures of the head are those of a Caucasian male.  The scalp is completely burned.  The external plate of the skull is charred.  The ears are completely charred.  The eyes are also charred.  The nose is also charred.  The mouth is charred and some of the skin is noted.  The teeth show multiple post-line caps in front teeth.  THe upper teeth show a few caps on the premolar and molar teeth.  The chest shows complete charring of the skin but the ribs are well-preserved.  There is no traumatic injuries to the ribs or spine.  The upper extremities and the lower extremities show complete charring of the skin and muscles.  The abdominal wall shows complete charring with exposure of some of the small intestines which are also burned.

I thought I would check the digestive system to see if we could find out Jack’s last meal.  Nope.

“The mouth and pharynx shows a small amount of black soot.  The esophagus is clear.  The stomach contains approximately 5 cc. of light brown fluid.  The small intestine shows grossly normal architecture except for the hilum which is exposed through the burned surface of the abdomen.

The scalp is completely charred.  The external plate of the skull is charred and the internal plate remains.

Since the carbon monoxide in his blood was less than 10% – not anywhere close to lethal, we can surmise that he was alive when the fire broke out.  He did breathe in smoke – but not a lethal amount.  He died very quickly from thermal burns and lack of oxygen.

Official cause of Death – Extensive Thermal Burns of Body” 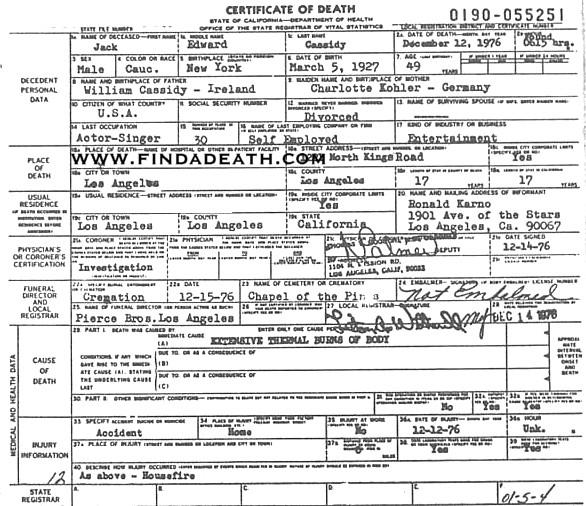 One of the issues that possibly plagued Jack was the success of his sons. I don’t know this for a fact, but I understand he was very jealous of them.  Jack allegedly refused the role of Ted Baxter in The Mary Tyler Moore Show because he (this is gossip) didn’t want to be a regular on a female led show.  He later made a couple of guest appearances as Ted’s brother.  So the combination of these things, might have made him pretty miserable.  I spoke to Cloris Leachman recently and asked about Jack. She had a vague recollection about Jack refusing the role. When I asked about Jack’s disposition possibly being bitter, she looked at me like I was nuts.. She had nothing but praise for Jack, and I think she’d have been pretty honest if it weren’t true.

I was in the building that Jack died recently.  I couldn’t help but notice they are certainly prepared for a fire now.  It was almost funny.  Almost. 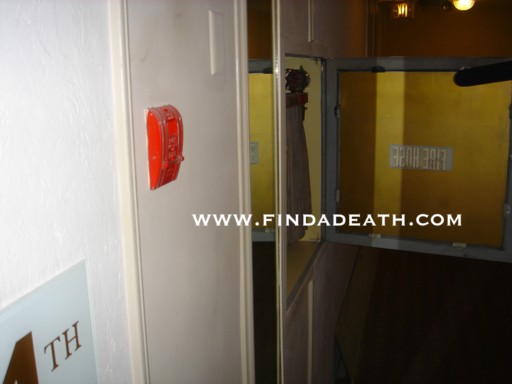 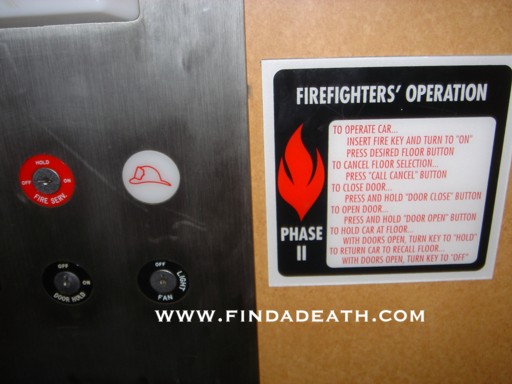 Starting with the elevator, up to the 4th floor, where a hose placed in front of Jack’s front door. 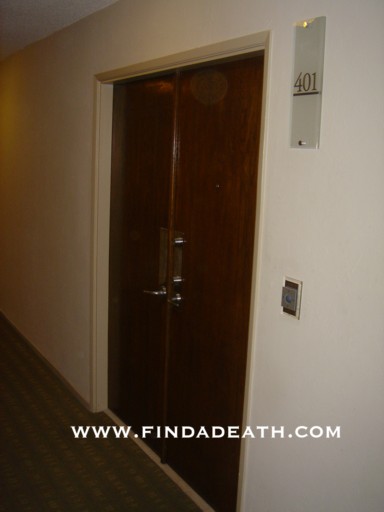 Structurally, the building is the same, and this picture of the charred ruins of Jack’s place, and the same room now, is completely recognizable. 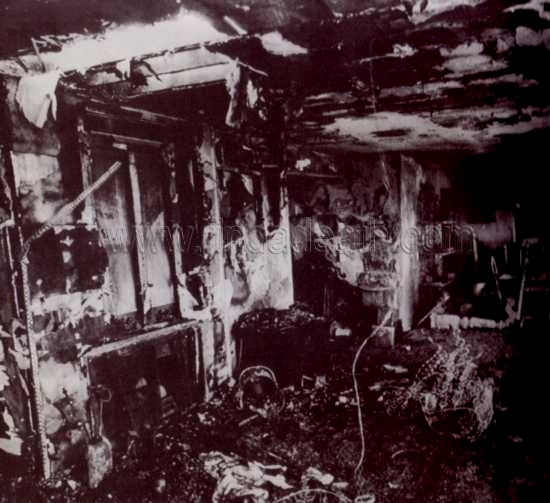 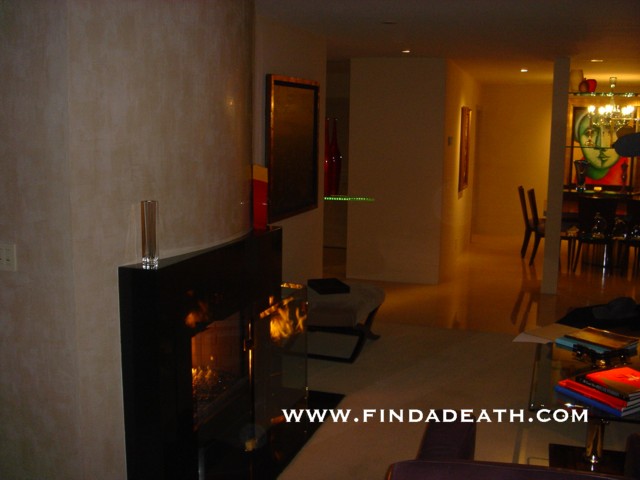 The body of Jack Cassidy was taken to the Chapel of the Pines Crematory, and was scattered at sea. 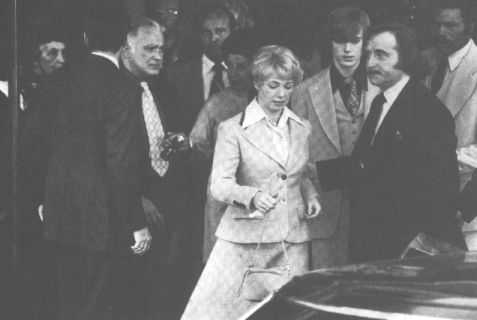 “He was an extraordinary man with an uncanny sense of humor and a gifted talent. He was one of a kind and the world suffers a great loss that he was taken from it so soon.”

He left behind about $150,000, noting specifically that ex wife Shirley and son David receive nothing, and a large portion going to the Motion Picture Country Home.  Shirley was named beneficiary of a life insurance policy. 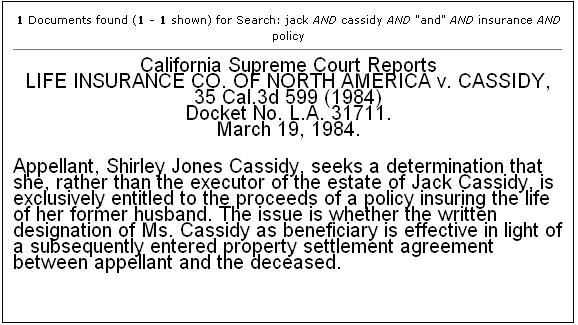 There is talk that Jack haunts his former home.  He has made an appearance or two and always in a non-threatening way.  A psychic was consulted with regards to contacting Jack, and that person recommended leaving him be.  Things are fine now, but poking a spirit with a stick might not be a good thing.

Trivia:  Actress Leigh Taylor Young lived in the condo until early 1999.  She probably slept quite well.

FAD friend Jane communicated with Leigh about the alleged haunting.  Leigh responded, “I did live there for several years not knowing for some time of the circumstances of his death, and an awful one at that as it was in a consuming fire.  Once I knew, I had the apartment lovingly and prayerfully “cleared” and light sent to him …I never experienced his presence.  Leigh”

WE ACTUALLY GOT IN.  Crazy.  We also heard about a parnormal experience from the owner.

A 2010 renovation of Jack’s apartment included some construction that unveiled a few pieces of charred wood. 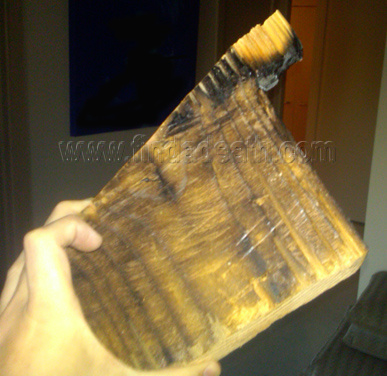 Update April 2010: My friend Darren Boakes recently saw a Shirley show in London.  Darren reports, “Shirley Jones did a week’s cabaret in the glittering West End unfortunately it only lasted for a few days due to her sore throat.  Rumour is that ticket sales were poor. Her voice did suck but not as much as her son Patrick Cassidy who did his own mini one man show in the middle. He talked how hard it was growing up being a Cassidy, and no one believing that he was straight.  We didn’t buy it.  The highlight was when he did a duet with his brother David, but the David he was singing to, was a cut out picture on a stick.  Yes.  On the piano were few mementos, one being a picture of Jack Cassidy. Shirley talked about him briefly when telling stories of her life but she didn’t mention the fire or the reading of the will. 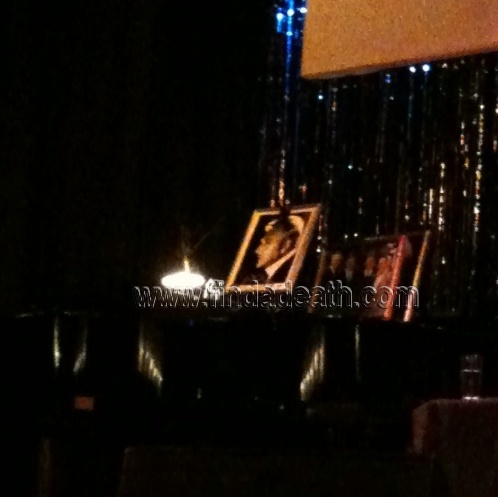 Findadeath friend Jeff sends this:  You may have already seen this, but I thought I’d pass it your way, just in case you haven’t. I was watching an old episode of What’s My Line, from 1969, and Jack Cassidy was one of the panelists. Of all the people you feature on your site, I think his details rank among the most intriguing and gruesome. Anyway, here he is on What’s My Line, being introduced by another panelist. When he walks on stage at 1 min. 18 secs., just watch what he does.

Interesting, Jeff.  Thanks.  It’s also Jack with an “ACTORLAND” accent.  Jack, you were from New York.
Jonathon Harris (Dr. Smith from Lost in Space called they type of accent “affected.”

Jack’s Will and Probate file are available at Celebrity Collectables.

Jack Cassidy’s home is a location featured on the standard Dearly Departed Tour.

Thanks JC, C, and Coconn