I chose the photograph above for two reasons, the first because it’s from my favorite film,Sunset Boulevard, and second, because I thought it really odd to find Jack Webb with a cheesy grin on his face.  This story is for my buddy Richard Waybright, without whom this would not be possible

According to Jack’s widow, Opal, “Jack loved jazz, strong drink and beautiful women.”  One source mentions that Jack used to hold court at the HMS Bounty every Monday night during the early 70’s. 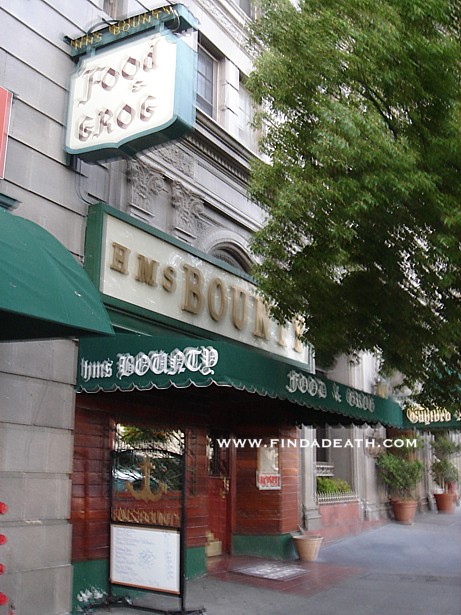 I love the Bounty – a great relic from old Hollywood – that hasn’t been messed with.  About a year ago there was a wake held in the Bounty for the Ambassador Hotel, which stood across the street. 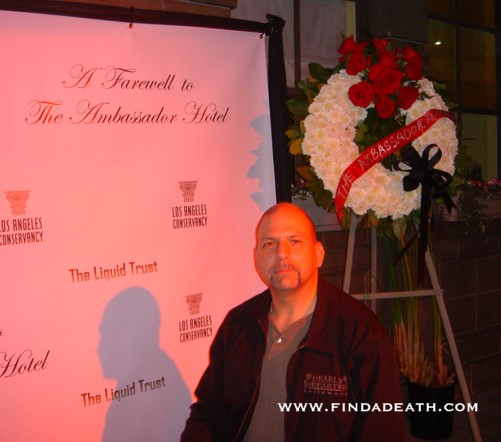 Diane Keaton was prattling on about the building talking to her or something like that.  That part was pretty bizarre, but overall an interesting evening. 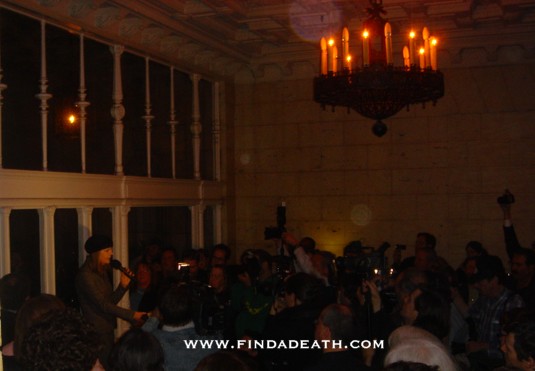 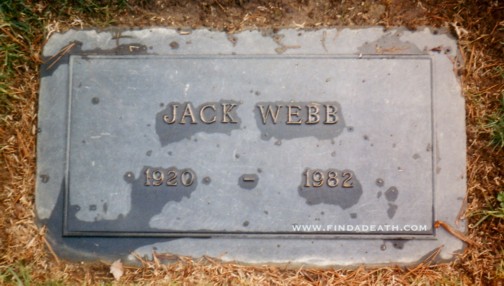 According to John Javna and his book Cult TV, Jack Webb was an asthmatic, only child, and grew up wanting to be an cartoonist.  He made up a portfolio and presented it to Disney, but an offer never came.  He later became friends with Walt Disney and shot Dragnet on the Disney lot.

Joe Friday (to a neo-nazi): “You keep harping about minorities.  Well mister, you’re a psycho, and they’re minorities, too.”

He was married 4 times, and paid nearly a million dollars in alimony.  His first wife was singer Julie London, who Jack hired with her husband, Bobby Troup, to work on his 1971 show, Emergency.  Bizarrely, Jack had a daughter with Julie London named Stacy, and she was killed in 1996 in a collision with a patrol car.

He lived in unit 2604 of this tall building. 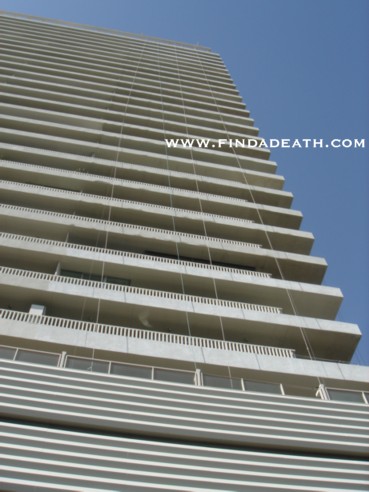 His apartment was actually two condominiums combined.  He had a spiral staircase installed and the massive concrete ceiling drilled through to accommodate it.  I believe this is the apartment that Cher now owns.  When she bought it, it was mentioned that it was the only two level unit in the building.

Other residents include Matthew Perry, Lindsay Lohan and Brendan Fraser.  Sidney Poitier used to live there, but when Shari Belefonte was on my tour, she told me Sidney had moved.  It is fascinating see the paparazzi across the street, waiting for Lohan to show up at the front entrance. 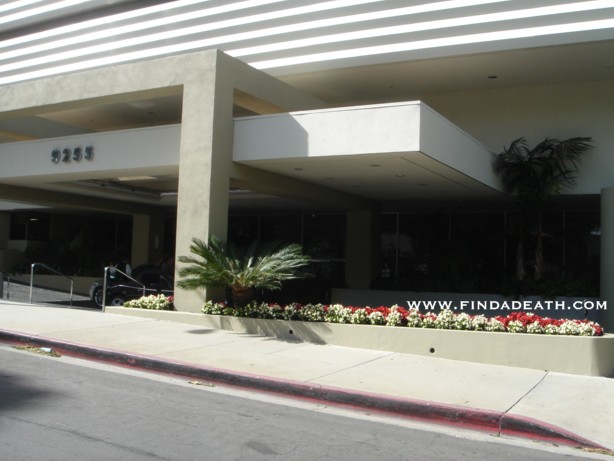 By late 1982, Jack’s health began to deteriorate. He smoked real lung-buster cigs like Chesterfields and L&M, he drank a lot and ate loads of meat.  His friends suggested getting help, but he ignored them.

Around 3 a.m. on December 23rd, Jack awoke complaining of stomach pains.  He went to the kitchen to make toast and have milk (yuck) when he collapsed.  His wife called the paramedics, who worked on Jack, to no avail.  He was pronounced dead at 3:23 a.m. of a heart attack.  He was 62 years old. 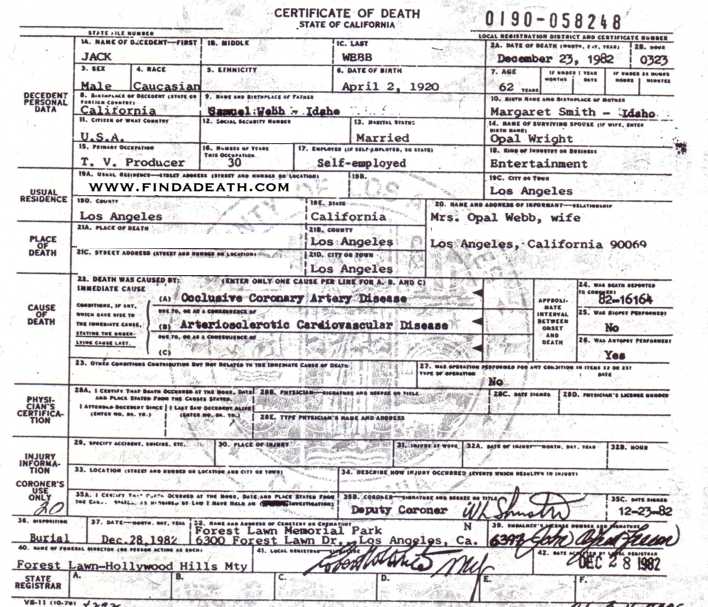 The flags in the city of Los Angeles were flown at half staff, and Jack was buried at Forest Lawn Glendale on the 28th.  He was the only civilian to ever be buried with full police honors.  He is buried in a traditional suit, and his signature red socks.

Trivia:  I clipped these from an article that ran in the LA Times about 13 years ago. I didn’t save the author, so whomever you are, please forgive me.

The badge number was 714.  There are probably several in existence, but this particular one was in the Hollywood History Museum. 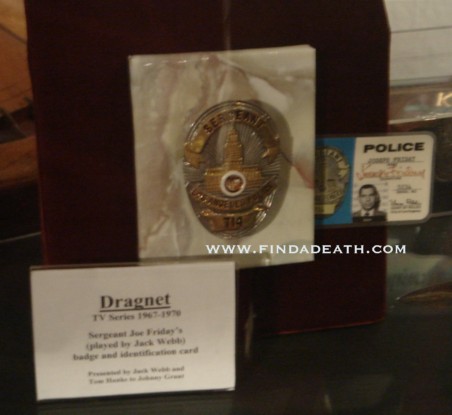 Jack had a thing for the number 7.  His production company was even called Mark VII, and according to one source, these filthy hands were actually his.  I choose not to believe this. 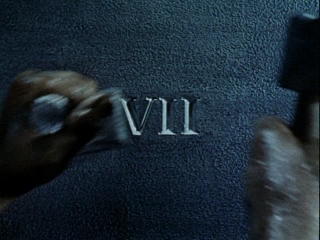 The makers of Dragnet were not allowed to keep overnight the LAPD badge shown on the show or the plastic decals with the LAPD insignia used on studio cars.  Instead, the items were brought over from the LAPD for each day’s shoot. 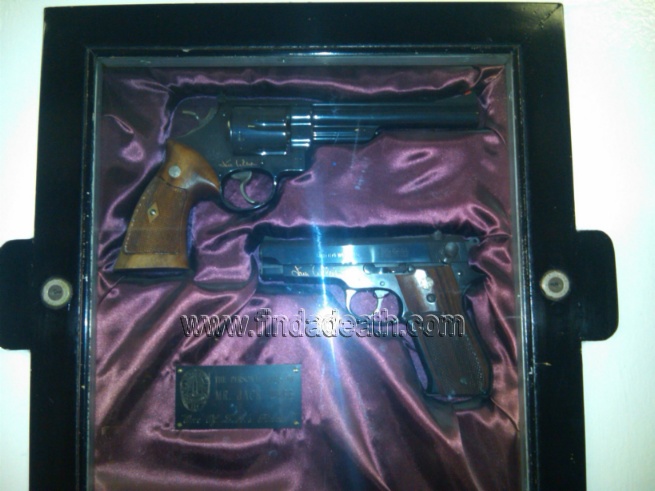 Jack also created Adam 12, starring Martin Milner and Kent McCord.  For Jack’s other credits, check here.  This is Jack being funny on The Tonight Show.

Thank you to Daniel Moyer and Eugene Alvarez for their research, from the book, “Just the Facts, Ma’am – the authorized biography of Jack Webb.”