Jackie Coogan played Uncle Fester. His daughter once said that it was the only character part he ever really loved.
That’s pretty all right, eh? He was once married to Betty Grable. 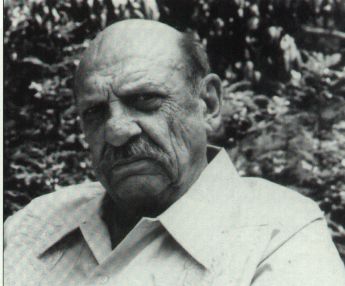 From Findadeath.com friend, Kelly:  Hello Scott – I just discovered your website two weeks ago, and am totally addicted.  Keep up the great work!  Here is a link to a picture that I found to satisfy my curiosity about the Uncle Fester/Pin-Up Queen marriage.

Findadeath.com friend, Joe Tanner, sent me this very interesting tidbit.  Check it out!:  “It was in 1942, in Burma where Jackie was arrested at a cathouse. All military personal were ordered to stay out of these homes off ill repute. My father was an MP and was called to a scene that had many service men at the site. One of these men was Jackie Coogan. He was already known from his films, and my father was one of the men who arrested him. Jackie was given some time to serve and according to my Mom’s version (of what she remembers my father telling her) was that Jackie was demoted a couple of notches in rank. ”

How really interesting, Joe.  Thank you for sending that!

In March of 1984, Jackie was visiting his daughter, Leslie, in Malibu, when he suffered a heart attack. At noon on March 1, 1984 – he was admitted to the Santa Monica Hospital, and he died there at 1:37 in the afternoon. He had been suffering from heart disease and hypertension for quite a while. He was 69 years old. 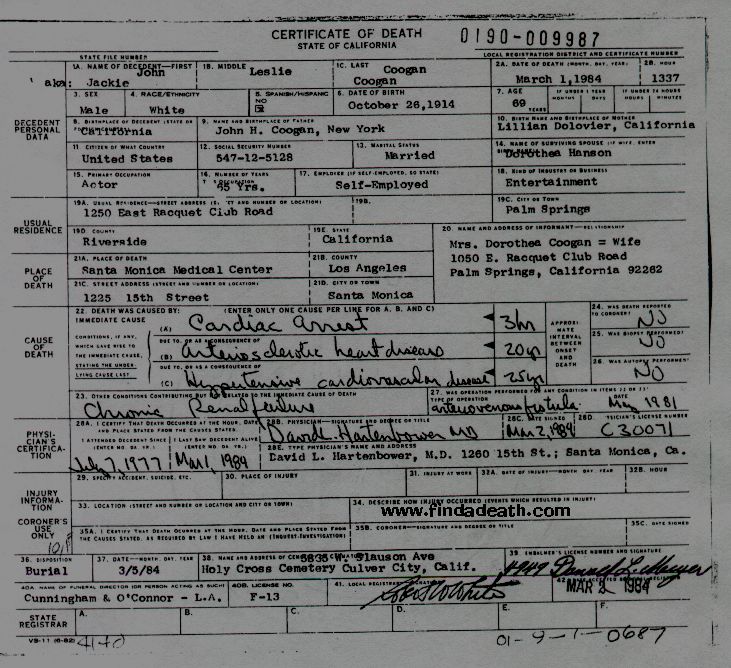 His funeral was held in the mausoleum of  Holy Cross cemetery.  Findadeath.com friend, Bob Siler, attended the event, and told me that John Astin read the eulogy, going on about his friendship with Jackie, and that the cast of the show saw him as their own uncle.  Others in attendance were Don Stroud , Hank Worden, and Dead End Kids, Huntz Hall (who was passing out autographs. Tacky.) and Gabe Holzer who snapped this fantastic picture of his casket. 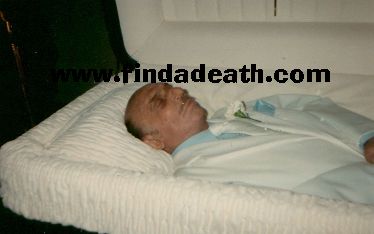 Bob also told me that it was open casket.  Bob remembers, “Now, when they opened the coffin lid, I turned to Greg and said, “They should have had a light bulb in his mouth”.
Don Stroud, who was next to us, looked at us and kind of smiled. Yeah, he thought it was funny.”  Thanks a bazillion, Bob.

Thanks again to Findadeath.com friend, Steve Goldstein, of beneathlosangeles.com  for his link.  Check out his page.  Great stuff there.

Scott, Am enjoying your website – very interesting.  Here’s some Jackie Coogan trivia.  In the early 1930’s Jackie Coogan was a student at Santa Clara University.  His frat brother and friend was the scion of a San Jose merchant family that owned a local dept. store.  In 1933, two drifters kidnapped the young man (Brooke Hart) for ransom. His body was later found in the shallows of San Francisco Bay near the town of Newark.  The two drifters, John Thurmond and ______ Holmes were being held in the local county jail.  Upon the discovery of Hart’s body, the town folk went nuts, stormed the jail, knocked down the doors with battering rams, and proceeded to hang the two kidnappers from a tree in nearby St. James Park.  How does Jackie Coogan fit into this story?  He reputedly coiled the rope that was used to hang the two men. Eye witnesses placed Coogan at the scene of the crime.  The lynching was the last public hanging in California and was the subject of a book in early 1980’s by a now-retired San Jose Mercury-News reporter named Harry Farrell.  The book was titled “Swift Justice” and is available on amazon.com or at many public libraries.

This just in, February 2005, from Findadeath friend, Michael:

Here’s a little trivia that not everyone knows regarding Jackie Coogan.  A federal law (The Coogan Law) was named after him.The Coogan Law was enacted in 1939, to assure that child actors receive a portion of their earnings when they reach majority age.

Coogan had filed suit against his parents to recover the $4 million fortune he had made as a popular child star.

Unfortunately for Coogan – and for hundreds of other child actors, a minor’s earnings were legally the property of the parents or guardians. As a result, Coogan entered adulthood penniless, even though he had earned millions.

Also, current actor Keith Coogan is his grandson.
Thanks, Michael!

Scott, As you probably know, Jackie starred in the 1921 six reel classic, “The Kid”, with Charlie Chaplin. Chaplin had tested Coogan in a movie (A Day’s Pleasure) two years prior to make sure he could handle the strain of shooting and re-shooting scenes. He did, and the rest is history. If you’ve ever seen Jackie in “The Kid” you’ll no doubt remember his heart wrenching scenes where he is separated from Chaplin, and sobs his heart out.

Anyway, cut to 1972, when Chaplin was brought back to the US for an honorary Oscar. This is after years of living in seclusion after being in deported from the US essentially by J. Edgar Hoover. Well, who should meet the 83 year old actor at the airport, but Jackie Coogan. The two men reportedly broke down crying, and Chaplin replied, “There is no else in the world I would rather see than you.”