The Godfather of Soul, The Hardest Working Man in Show Business.

He was in Atlanta for a dental appointment when he fell ill, and admitted into the Emory Crawford Long Hospital with pneumonia.  Shortly before he died, he uttered, “I’m going away tonight,” he took three short breaths, closed his eyes and died. He died of congestive heart failure around 1:45am, on Christmas Morning, 2006. 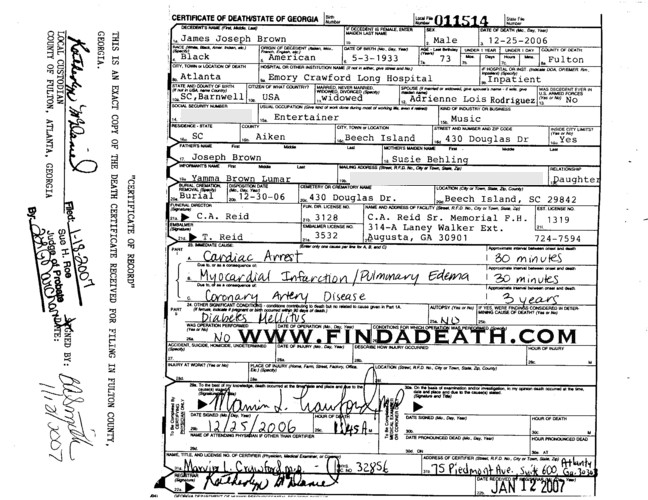 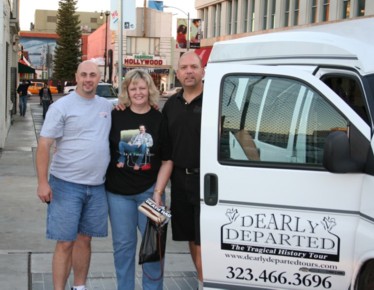 for the legwork here.  “Here are a few pics from James Brown’s statue 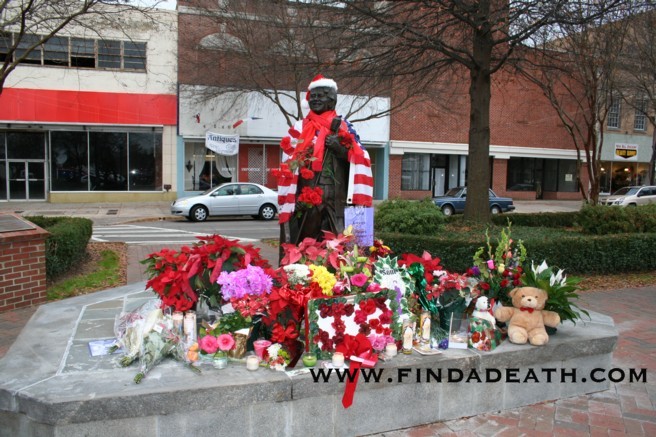 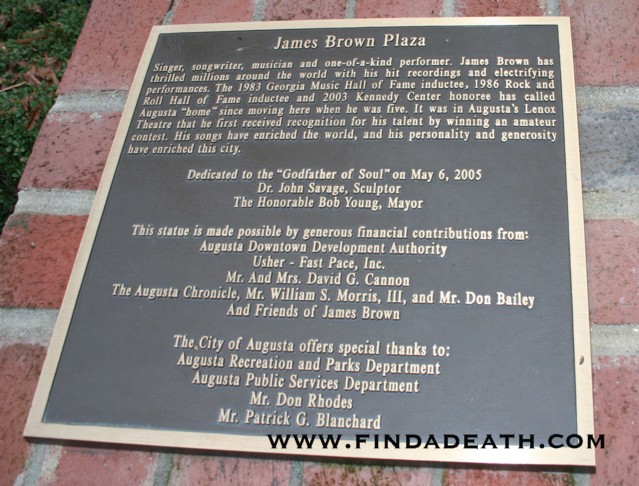 The pics I did send are of his mailbox (of course!), the gate itself at the mansion on Douglas Drive, 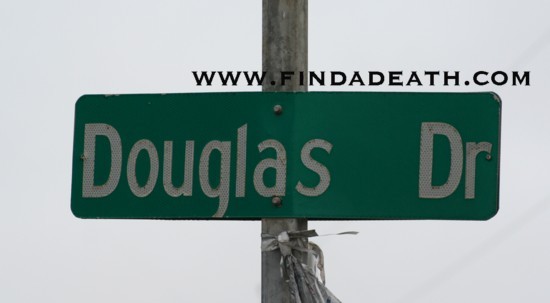 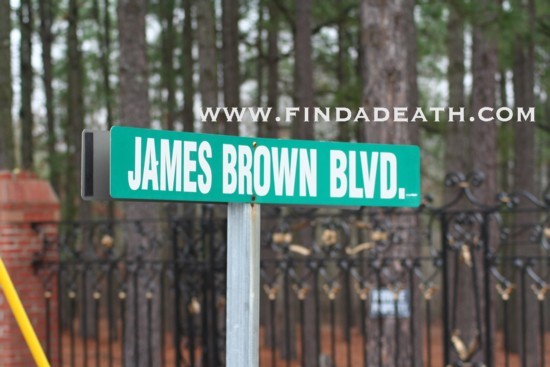 is at the gate itself, and is the driveway, though not “officially” that.  The real street with that name is in Augusta.  Of course, we had to have our picture with his guards, 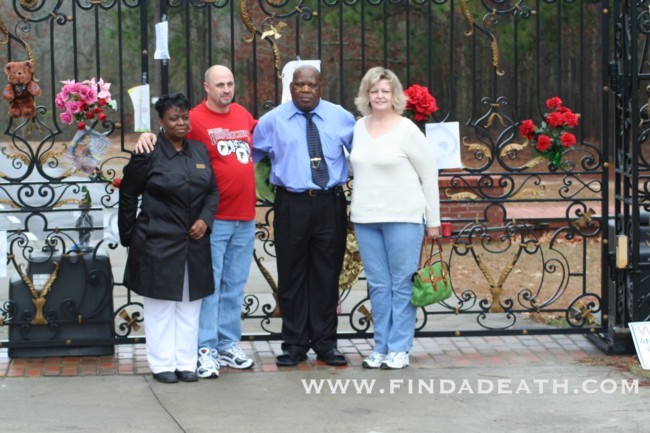 who talked to us for over an hour, telling us all kinds of dirt.

The truck that’s inside the gate 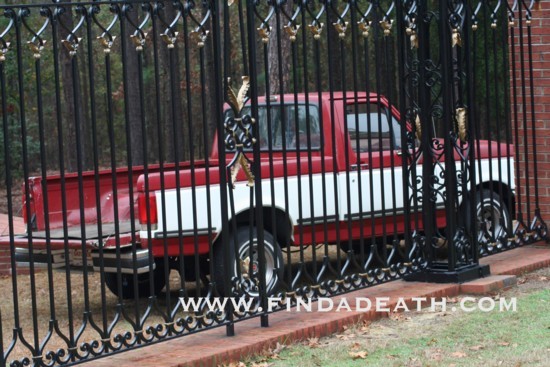 is the one he was in during his infamous shootout here in Augusta, that he served time for.  It had been sold years ago, and recently the dealer who got it, gave it back to James.  For some reason, they thought it was cool to leave it at the gate.  The guard said the “man” framed James in that truck.  Very interesting conversations that day.”  Thanks so much, you guys.His casket left a Georgia funeral parlor Wednesday, for an all-night drive to New York. It arrived at Sharpton’s Harlem headquarters just before noon Thursday, and was quickly transferred to the carriage for a 20-block procession to the theater.

Findadeath friend Barry mentions: “Al Sharpton accompanied the body from Georgia, and walked behind the carriage Thursday. He stood at Brown’s side for hours during the viewing”. 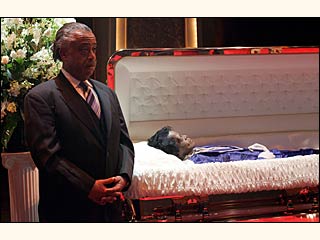 “How could someone with such energy and life really ever be gone?” said Sharpton, a close friend of the Godfather of Soul for three decades. “James wasn’t just No. 1,” Sharpton said, “he changed the beat of music all over the world.”

Earlier, Brown’s body was carried to the theater through the streets of Harlem on a majestic white carriage drawn by two white horses.

Weekend At Bernie’s moment from Findadeath friend Joab:  I’m writing to see if you noticed that James Brown’s body changed suits somewhere between the Apollo Theater and the James Brown Arena.  The picture you have posted shows a white/cream colored shirt and the shirt at the Arena is definitely red.  The suit is also obviously different.

His will is a mess.  He didn’t list his last wife or child, his widow named in the will is the one that died back in 96 in a botched cosmetic surgery thingy.

Findadeath Fanya from Greece sent me these photographs of the memorial booklet for James’ funeral. 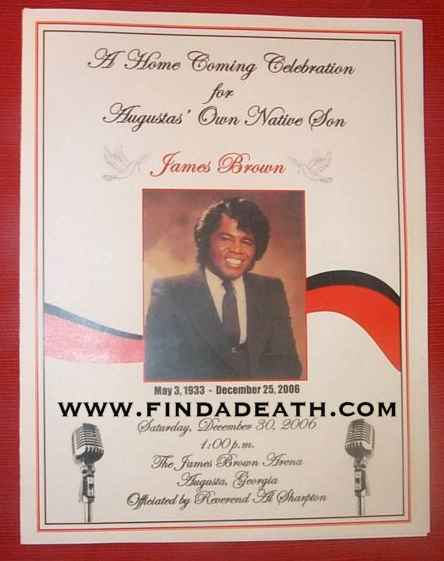 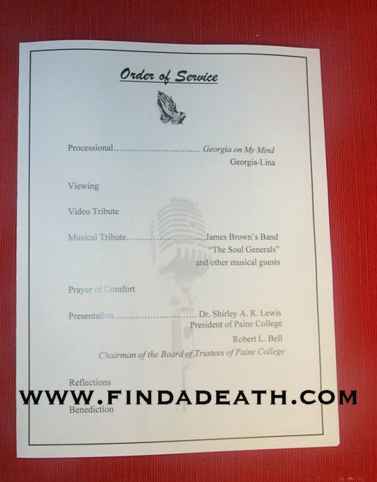 Thanks so much, Fanya!

As of this date, January 18, 2007 – James Brown remains unburied, in his gold casket, in one of his many fine suits.  He is in a temperature controlled room, until a decision can be made regarding where he will be buried.

These photographs sent in by Findadeath friends Brandon, and Doug in Dearborn.  Thanks guys! 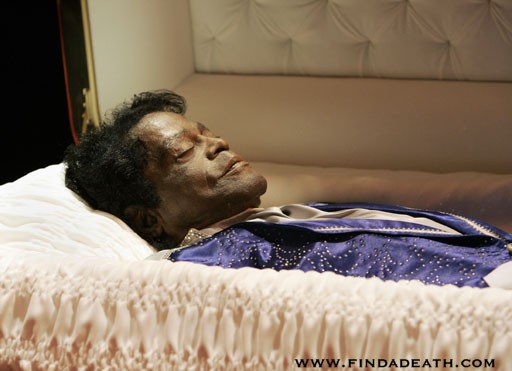 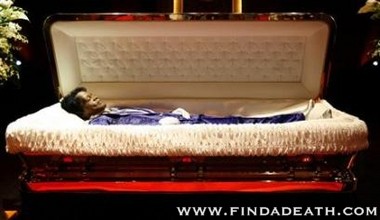