I wish I hadn’t done it.

Most of the murders he committed, took place in an apartment building called the Oxford Apartments, at 924 N. 25 Street in Milwaukee, Wisconsin. 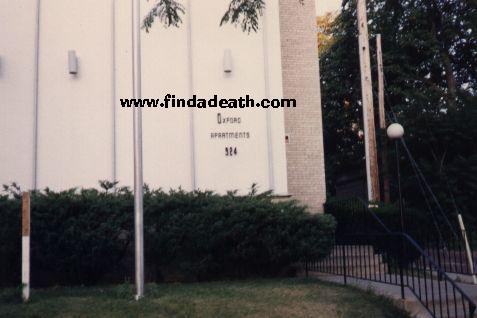 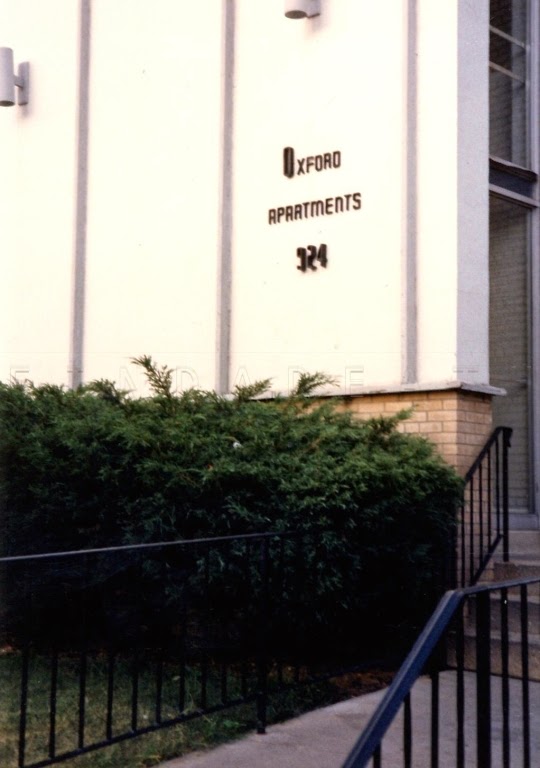 Findadeath.com friend Mark Edwards sends this picture of the inside of ol’ Jeff’s digs. 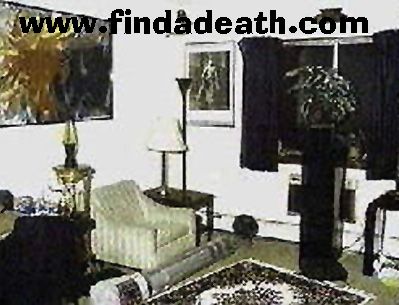 Dahmer was arrested when his last intended victim got away, on July 23, 1991.  The victim flagged down a police car, and told them what had happened. They returned, and found awful things.

The police found plenty of proof of what Jeffrey had been up to, when they entered apartment 213. 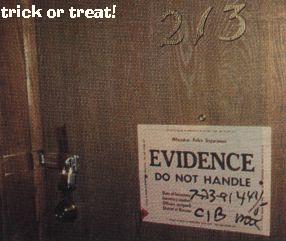 Workmen donned chemical suits as they emptied the fly infested one bedroom flat of human remains, out the back door. 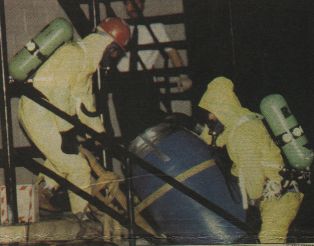 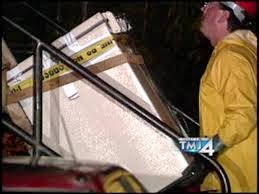 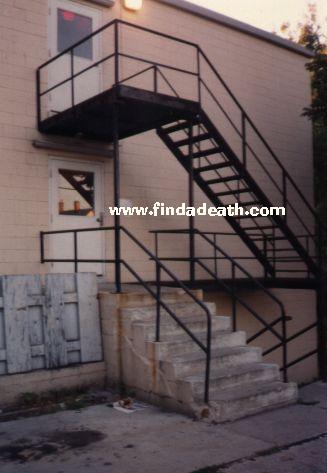 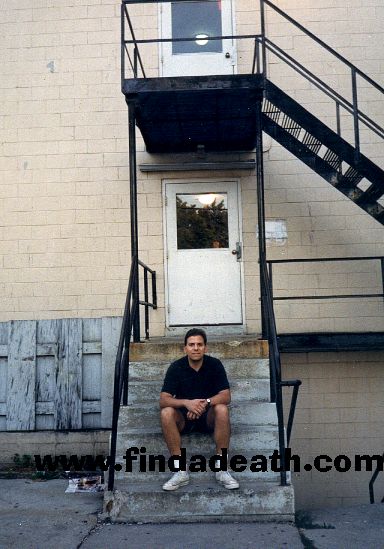 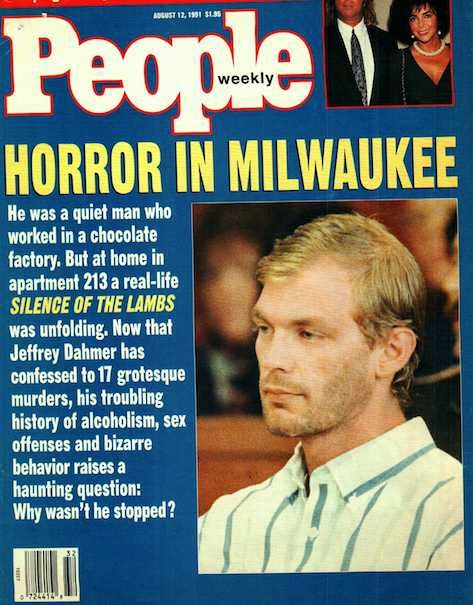 Jeff confessed everything, and let me tell you, some of the shit he got up to was pretty out there. Some of the information mentions that he had a 57 gallon drum, that held three of the victims torsos. He would boil his victims heads, and keep the skulls in the closet. Not all of them, mind you, just his faves. He would spray the skulls with spray paint, to make them look fake. This is gross, but he would cut off peoples’ parts, put them in jars of formaldehyde, and look at them while um… takin care of da biz, you know? Yikes. I have some bad photocopies of some of the victim pictures, but if anyone runs across something better, let me know.

UPDATE: Findadeath.com friend Mark Edwards sends in these fascinating photographs of Jeffrey Dahmer’s victims. I warn you, these are pretty bad.  This is the lineup. Sad. 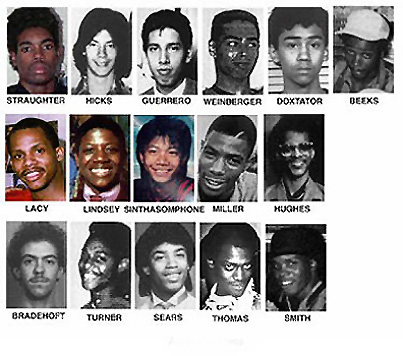 This is what police found. Again, I cannot express how horrible some of these images are Please don’t go click on them if you can’t handle dead people.

Thank you, Mark, for sending them in, and satisfying my curiosity. No doubt I’ll get hate mail about them, but there you go. You can always go away. But Noooooooooooooo…

After his arrest, Jeff’s belongings were put into storage. Amongst the possessions were:

The videos Blade Runner, Star Wars, Hellbound and The Exorcist III. Ugh. Exorcist 3? Could explain some things. Other naughty vids that were there included Hardmen II, Rock Hard, and Tropical Heatwave.

Other items were: Doritos, Ruffles, cans of Bud, Pabst and Miller, Clorox Bleach, Woolworth Pine Cleaner, peacock feathers and a fish tank. There were various sheets and pillow cases with blood stains on them, but I’m sure they weren’t thrown in with the rest. I’m sure some pathologist burned them or something. Oh, and a refrigerator.

On February 17, 1992, Jeff was sentenced to 15 consecutive life terms, for the murder and dismemberment of 15 young men and boys. He would serve his sentence in the Columbia Correctional Institution, near Portage, Wisconsin. 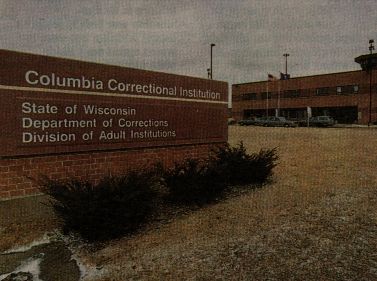 I dropped Jeff a note in the post, when I was still living in Chicago. I wanted to start (don’t ask me why.  Maybe because he was a hottie.) a correspondence with him.  I knew he wouldn’t answer fan mail, so I sent some envelopes, paper and pens, hoping to get a response. I did, but it was from the prison, saying that he had to buy those things on his own, in the canteen.

When he woke on the morning of November 28th, 1994 – Jeff had what was to be his last meal. A hard boiled egg, toast, cereal and coffee.

At 7:50 a.m., Jeff and two other inmates were brought in to clean the prison gymnasium. Twenty minutes later, guards found Dahmer and one of the other inmates beaten severely, and one hour and one minute later, Dahmer was pronounced dead. He was beaten to death by another inmate, 25 year old Christopher Scarver. 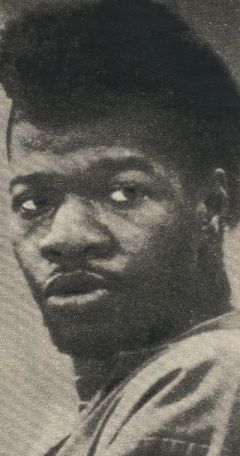 Dahmer’s head was destroyed with a broom handle, then smashed against the floor and wall. There was blood everywhere. He died en route to the local Divine Savior Hospital. The other inmate was in critical condition.

Apparently, Jeff’s last words to Scarver were, “I don’t care if I live or die. Go ahead and kill me.” 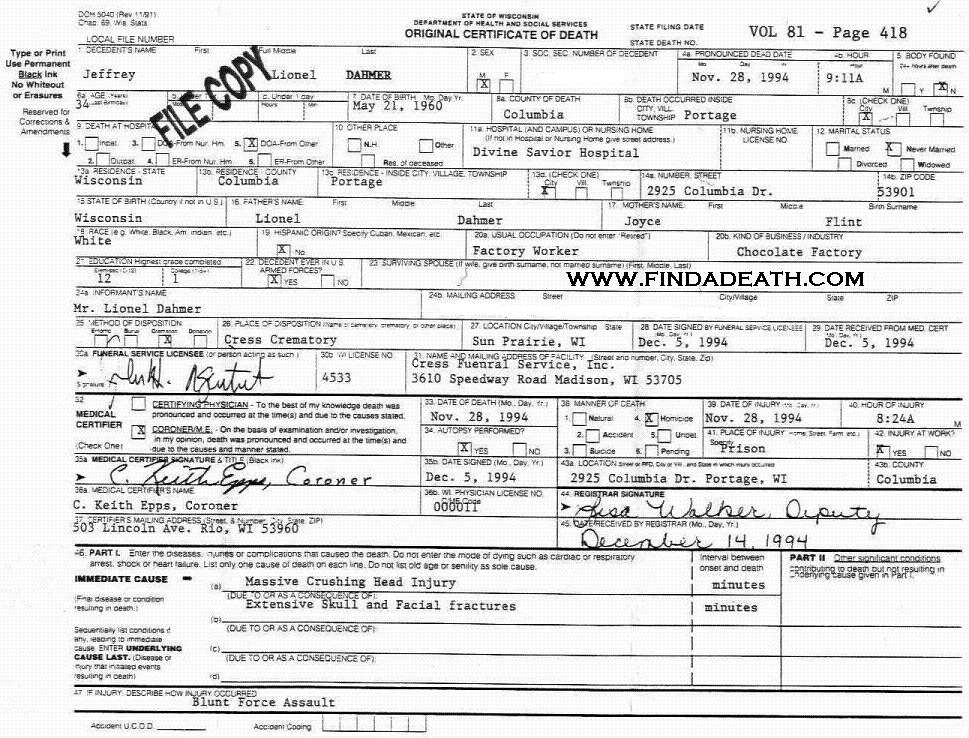 October 2004: Amazing first hand info comes in: My name’s Robert, and I was just released from C.C.I in Portage WI. I was in there when he was. I was in unit 5, and he was in the smurf unit which is now called unit 6. I was working in the gym the day he was killed, and let me tell you, he was dead way before he ever left the prison.

After he was beaten, it took the nurse over 40 min to get some outside help in there. I even remember an officer saying he was glad Dahmer got “fucked up.” He was also beaten with a preacher bar (a part of the weight machine) and not a broom. That’s the reason we don’t have free weights no more in Wisconsin prisons.

I’ll also tell you this, I believe his death was an inside job, because in the gym where the officers stay, they can see into the locker room, and when we would clean, there would have to be at least one officer watching us. That day, all 4 officers where in the bathroom!!!! After Cris killed him and the other guy, he just walked back to his room and locked himself in. They didn’t even come to get him out of his room until the next day!!!!

That’s when they brought him to ds1(the hole) and out of nowhere, this broke bastard who could never buy anything off of canteen, had $100.00 pop up on his account. And this is the best part. @ of the officers that were working in the gym that day retired a few months later. And they were only in their 40’s.

Trivia: Dahmer’s body was kept shackled at the feet during his autopsy. “Such was the fear of this man,” according to pathologist Robert Huntington.  Sounds pretty stupid to me.

Ok, clarification from Findadeath.com friend Marta:
Jeffrey Dahmer was a prisoner at the time he was killed. Whenever a prisoner dies, and for whatever reason they die, the body is handcuffed to a belly chain and they have shackles applied to their ankles. I realize this sounds really lame, I mean, dead is dead, and it isn’t too likely that the prisoner is going to do a Lazarus and come back to life and walk away.

On the other hand, prisoners were doing time in a prison, and because they died behind bars, even if
they died of, say, cancer, the death is treated like a crime has occurred. The body is subjected to a “Chain of custody” that is the body is shackled and cuffed, and the body is transported by prison staff or by an ambulance, with an officer with the body.

I realize it sounds like a very complicated process, but it in theory prevents any question of tampering with the body.

I worked as a Registered Nurse in a prison for 7 years, and I used to groan every time a prisoner died on my watch, because of the paperwork and hassle.

The “Oxford Apartments” were razed in November of 1992. 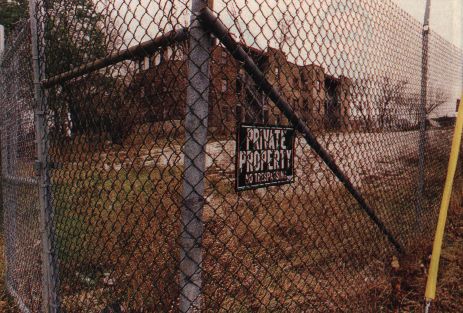 Supposedly they were going to make some memorial garden on the lot, but I haven’t heard any proof that it actually happened.

UPDATE DECEMBER 2, 2002: Findadeath.com friends Mark Cramer and Janet Schiessl got proof that there is NO memorial garden, when they were in Milwaukee this past weekend. They send this picture  of where the apartment building stood, near the corner of Kilbourn and 25th, in Milwaukee. 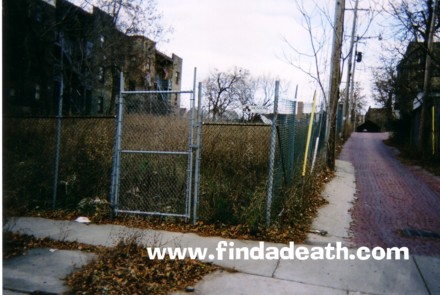 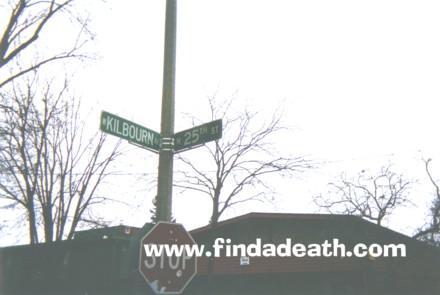 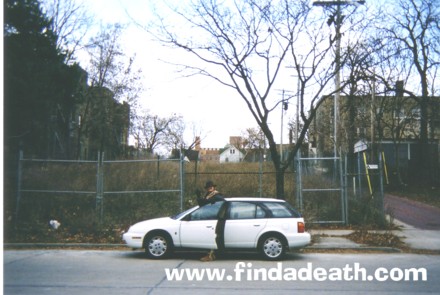 In 1996, there was a move to auction Jeff’s things, to raise money for the victims families. It never came to fruition. Imagine buying one of his forks or something.  Yeah, it’s sick and tasteless – but what a conversation piece.  A group of Milwaukee businessmen raised enough money to buy the items outright, and had them destroyed.

On January 27, 2000, Jeff’s mother died. I wonder what happened to her share of his ashes.  Probably with her, I suppose.

Jeff’s dad wrote a book, called A Father’s Story. It’s really very touching. This poor guy trying desperately to make sense out of the insanity his son caused. I really felt for him.

UPDATE May 2003, from Findadeath friend Michael in Boston:

Just found your site today, after hearing about it on the radio this afternoon.  I don’t know if you can use this info, but it is an interesting sidebar to the death of Jeffrey Dahmer. The other inmate who was killed in the attack by Scarver was Jesse Anderson. He stabbed his wife over 40 times (including through the eyes) then tried to blame it on some black youths, ala Chuck Stewart.

For a few days police were scouring the area, they even had police sketches from Andersons’ descriptions. When the real story came out, the black community in Milwaukee was understandably outraged.  It’s no coincidence that a black man killed Dahmer (whose victims were predominantly black) and Anderson together.

Scarver was awarded an ‘unsung hero’ award by the Spear and Shield Society, which bills itself as ‘Defenders of the African Community.’  I thought maybe this could be added to your Dahmer section as trivia. Keep up the great work.

Thanks for the info, Michael! 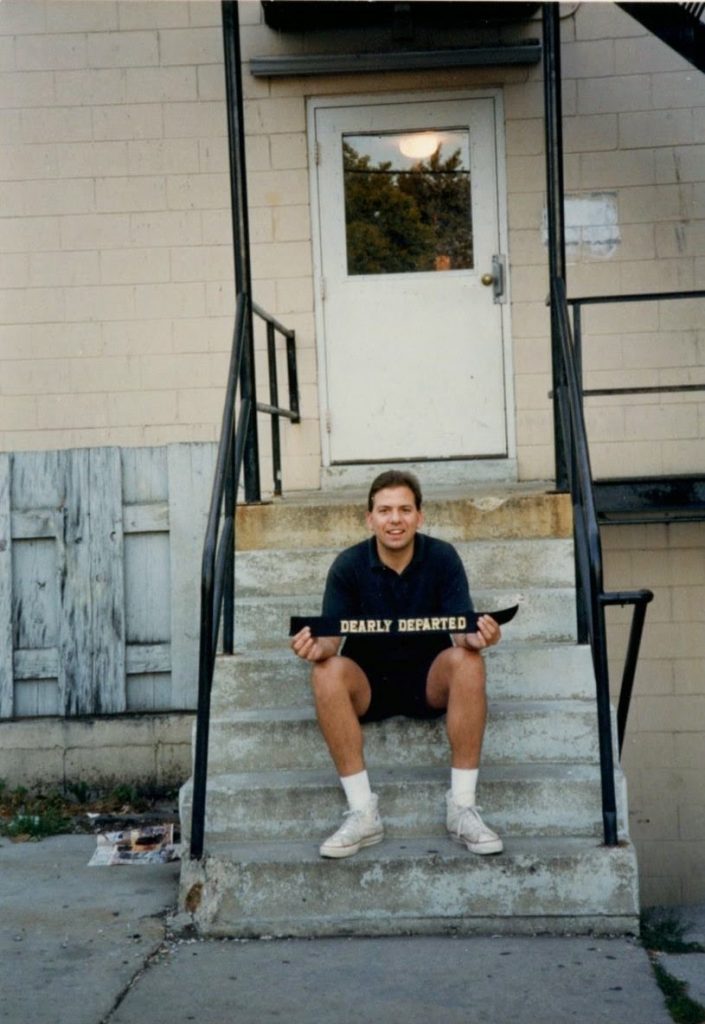