Okay, admit it. You don’t know who she is. I didn’t either. This is the chick that used to be Keanu Reeves’ girlfriend. By all accounts, a pretty nice woman. She used to work for David Lynch, which raises a fucked up flag or two. I saw the film Mulholland Drive, which was dedicated to her. That’s sorta what got my interest going. Plus, I didn’t realize how close I live to where she died.

When she and Keanu were together, she became pregnant. Awful thing, they lost the baby. Stillborn at Christmas 1999. They broke up shortly afterwards, but remained friends. This fucked up her life.

On April 1, 2001, Jennifer was medicated and drinking at a party held by fucked up Marilyn Manson. She was an April fool. She got to Marilyn’s house at 8pm, and stayed till 5:50am. Good party man. The weird bit is that someone drove her home (she arrived in someone else’s car) to get her own fucked up car, and she was to return to Manson’s party at his request.

She was driving northbound on Cahuenga in Hollywood, in a 99 Jeep Cherokee. 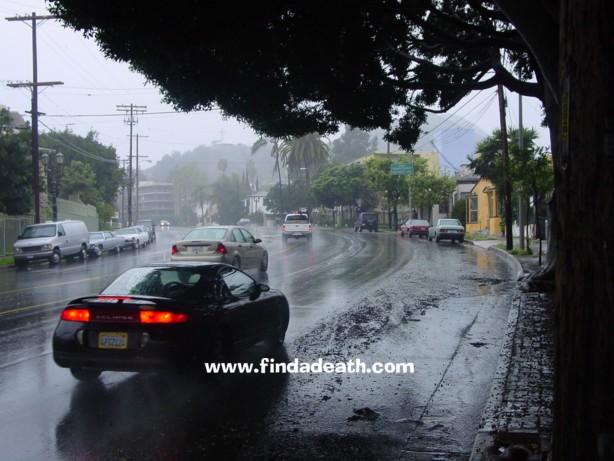 It seems she was going to get onto the 101 freeway, which is always fucked up.  She was going around this curve when she plowed into three parked cars. She was not wearing a seat belt. That’s fucked up.  The car flipped three times and she was thrown out and killed instantly. 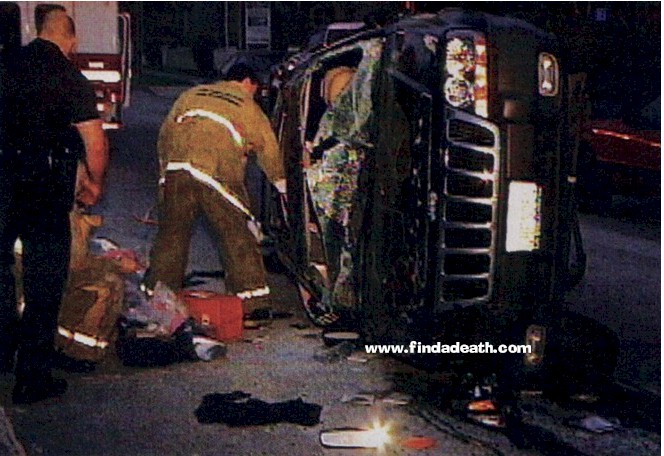 One of the reports states that there was brain matter along the inside roof, driver’s side door and in the roadway. Her skull and jaw were shattered and her right eye was protruding from the socket. Boing. Gross.  By daylight, the scene looked like this. 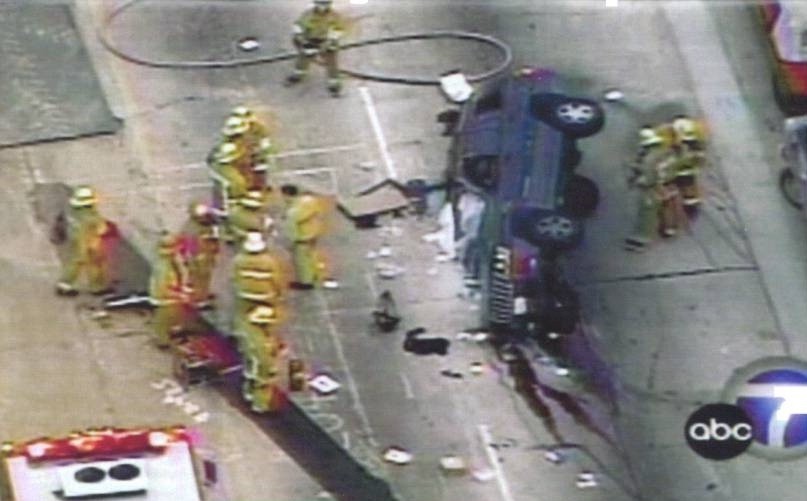 Her funeral was held at the Good Shepherd Catholic Church in Beverly Hills. 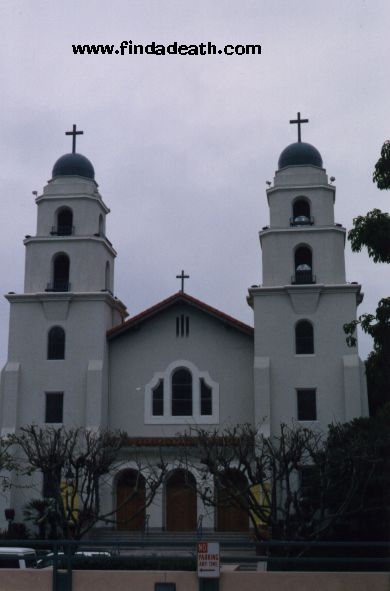 Jennifer was in a white coffin, covered in pink and white roses. After the funeral, Jennifer’s casket was taken to Westwood Memorial Park, where she is buried with their stillborn daughter.

Police found a couple of rolled up dollar bills with a powdery white substance on them, and it wasn’t anthrax, I can tell you that. They also found two bottles of Vicodin.

Jennifer’s mother is suing Marilyn Manson for wrongful death. Thing is, she only wants 25 grand. I don’t know what to think about that.

This just in, February 2003, from Findadeath friend, Jim Allen:

Thanks for the great stories on Jennifer Syme and Phil Spector.  Wanted to drop a quick line about the lawsuit against Marilyn Manson.  You mentioned that Syme’s mother only wants $25,000.  While I haven’t seen the petition, most likely it says “in excess of” $25K.  I’ll take a look at the California court rules if you would like, but most states (including my own states of Kansas and Missouri) state that for claims under  a certain amount that we have to state exactly the amount we are seeking, but if it is over a certain amount we have to simply state in excess of that amount.

Thanks for the info, Jim!