Just because I’ve got blonde hair and haven’t been to Bosnia doesn’t mean I’m a bimbo. I am still a serious journalist. 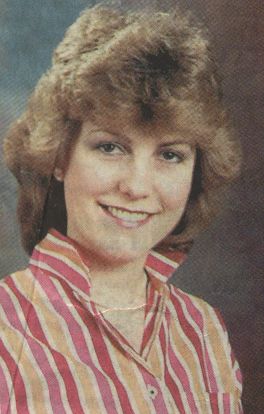 Big thanks to my friend Ryan, who helped with the legwork for this story. Cheers buddy.

Jill was 37 years old, and was famous for hosting shows for the BBC including Holiday, a travel show, and Crimewatch U.K., a crime solving show along the lines of America’s Most Wanted. She was also murdered on her doorstep, thus her appearance here. She was engaged to marry Alan Farthing, a gyno.  Someone once quipped, “Jill Dando was so modest, she had to marryher gynecologist.” She didn’t quite make it to the altar, unfortunately. These are her final movements.

On the morning of April 26, 1999, she left her fiancé Alan Farthing’s house in Chiswick, in her blue convertible BMW. They were going to be married the following September. She was wearing a beige calf length raincoat (always prepared) over a red jacket. She wore black trousers and boots. She was heading back to her own home in Fulham, which had recently been sold. She was more or less living with her fiancé, and only returned home occasionally to pick up the mail that was delivered through this mailbox. 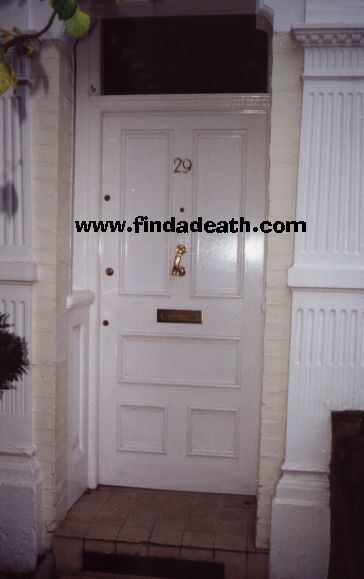 On the way, she stopped at the BP station in Great West Road for a fill up. 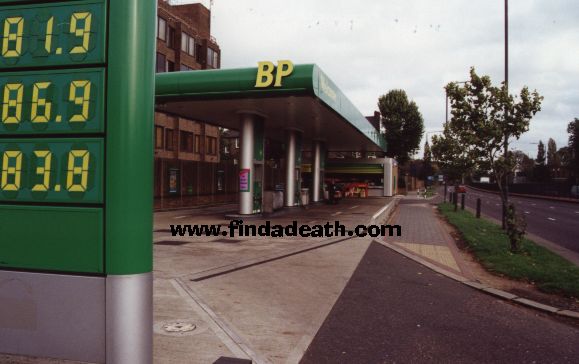 I find it sort of funny that this sign was one of the last things lovely Jill Dando ever saw. 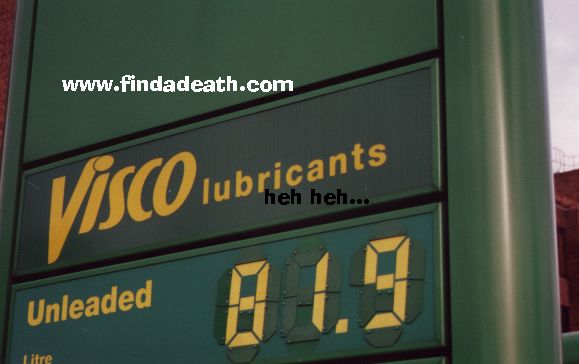 After that, she headed to the Kings Mall shopping center in Hammersmith. She popped in to Dixon’s, to pick up a cartridge for a fax machine she kept in her home. 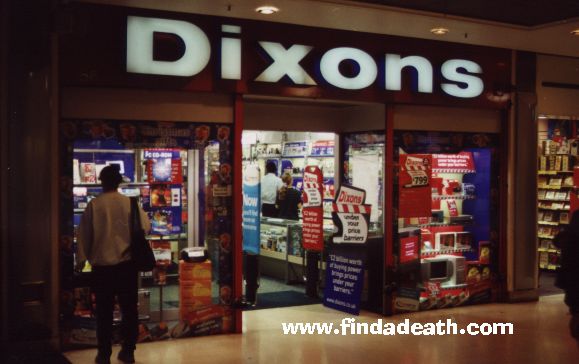 She was captured on the security camera at 10:55. 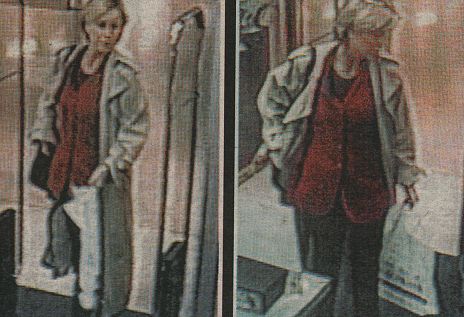 Staff at the shop said, “She came in looking for a toner cartridge for a fax but we had run out. (Big surprise.)” Little did Jill know that she would be dead within an hour. Dixon’s staff suggested she head across the road to Ryman’s office supplies. 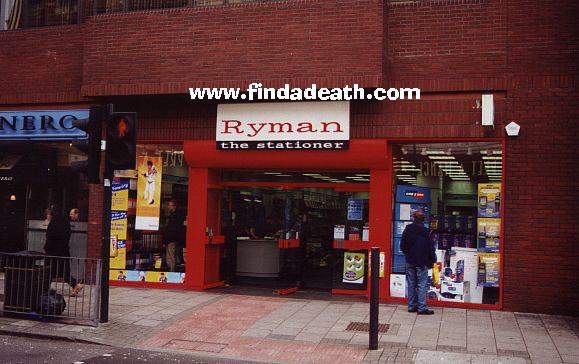 I also read a report that she bought fax paper there as well, so I called Ryman’s, and they confirmed that Jill did indeed scamper across the road and bought fax paper there. God knows if she ever got that cartridge, and knowing Dixon’s, she never would. Jill then got in her car and drove to the local fish market.

She slammed a fiver on the counter of Copes Seafood Company in Fulham Road, and snarled, “Gimme some fish.” 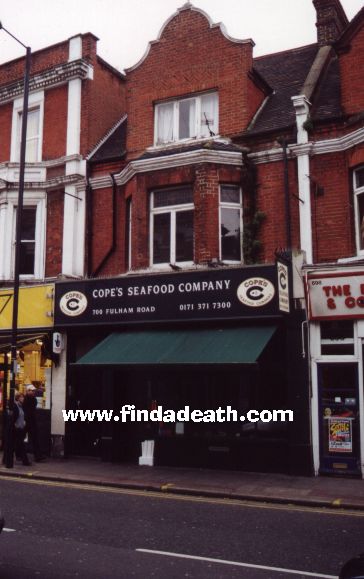 Kidding. Lovely Jill would never be that vulgar. She wanted two fillets of Dover Sole please and thank you very much. She grabbed her fish, and headed home. It was 11:26am.

She got to her house on Gowan Avenue, and parked her car. 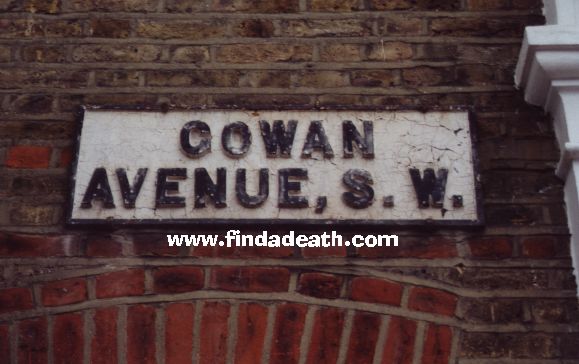 She sauntered up to the door of number 29.

She was at the front door and about to open it when the killer grabbed her by the forearm so hard, that she was badly bruised. As she screamed, he took out a Browning 9mm semi-automatic pistol and shot her just behind her ear.

The bullet that was used had six tiny scratches in the shell casing. 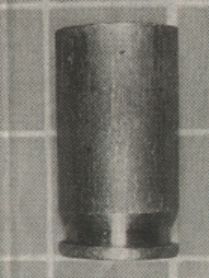 At 11:35, witnesses said that they saw a man running from Jill’s house. The police were called at 11:43 a.m., and Jill was taken to Charing Cross Hospital through these doors, where she was pronounced dead at 1:02 p.m. 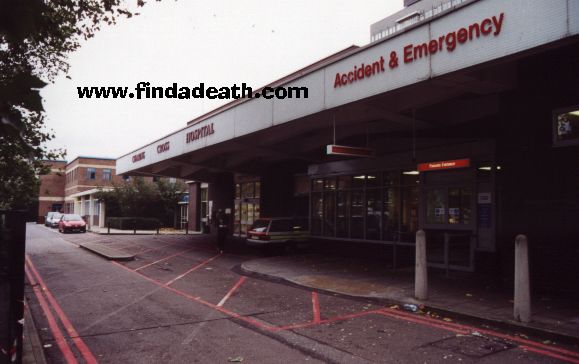 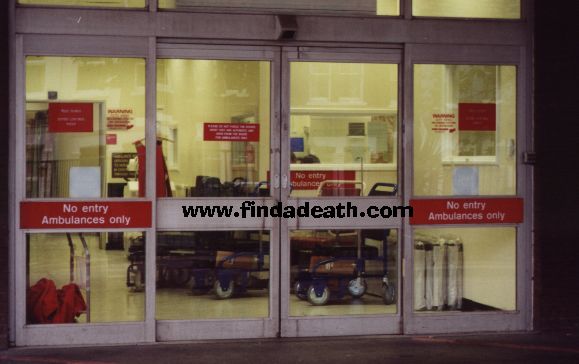 There are a billion theories given about who the killer is. Some say they saw a sweaty man walking briskly to the nearest bus stop. Others claim they saw a man in a blue Range Roger parked near the house from 10 that morning. Another was that a criminal featured on Crimewatch was out for revenge. Police covered the crime scene with a tent, and the investigation began. 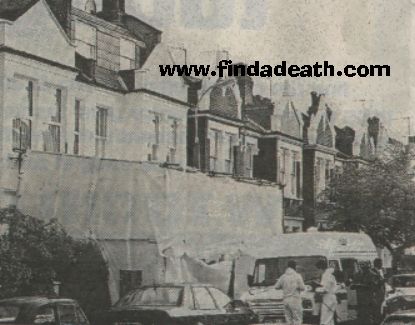 Jill’s body was in cold storage for almost 4 weeks, and eventually she was shipped back to her hometown of Weston Super-Mare, for burial. At 3 in the afternoon on May 21st, her flower draped mahogany casket was carried in to the Clarence Park Church while the hymn “Safe In The Arms Of Jesus” was played by the organist. 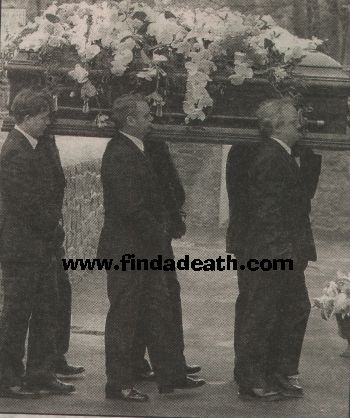 Inside the church, there were 100 mourners including her fiancé, her brother and her elderly father. The guest list for the funeral was taken directly from Jill’s own wedding list, found in her Filofax. Sir Cliff Richard and Sophie Rhys-Jones were amongst the guests.

Jill was then loaded into the hearse again, and taken to the Ebdon Road Cemetery, to be buried with her mother. 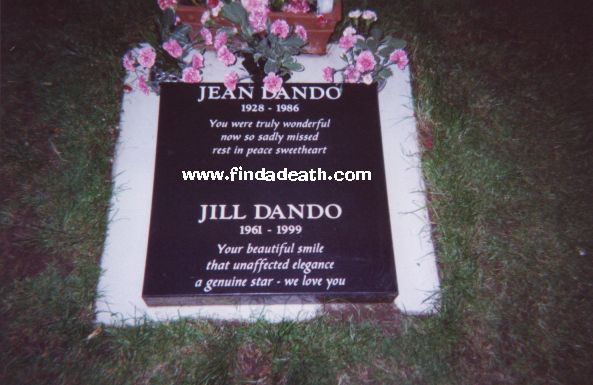 The investigation continued for over a year, with no real success. Just after the one-year anniversary, Scotland Yard announced that they arrested a man in relation to Jill’s murder. They kept him for a weekend, and finally charged him. This matter isn’t finished yet, and personally it all sounds a bit fishy to me. This guy came out of nowhere, and just when the police were getting criticized for not having any strong leads, blammo – they found a crazy person that was obsessed with Freddie Mercury. He even changed his name legally to Barry Bulsara, Freddie’s birth surname.

He lived in Crookham Road; 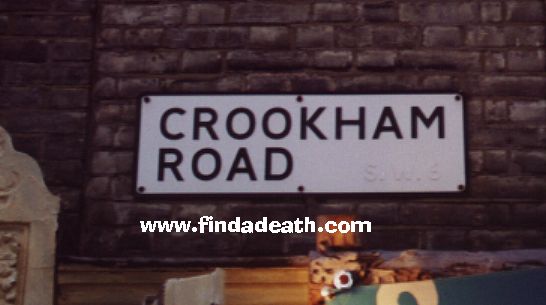 a lovely tree lined street only about 800 yards for Jill Dando’s home. 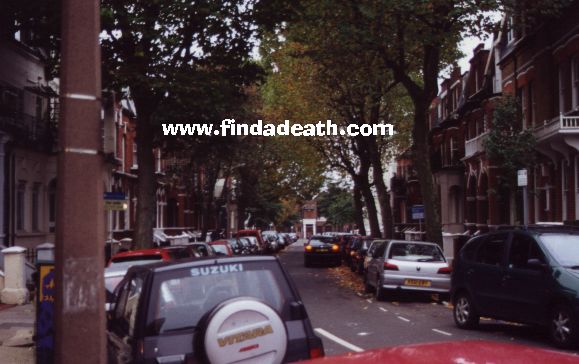 I didn’t know the address of the house, so I asked a man walking his dog. He pointed out THE WRONG HOUSE to us (I now know in retrospect). It’s still in this picture, but it’s the house on the right, not in the center. 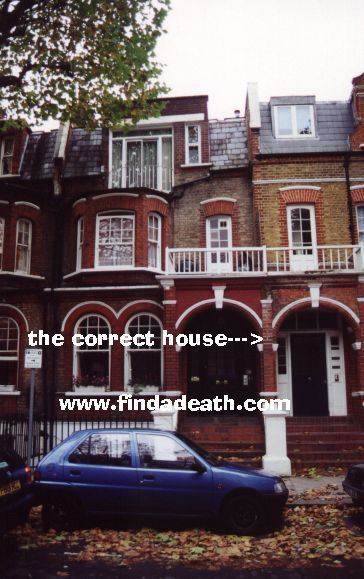 The dumb neighbor then said something about Bulsara being a weirdo. I asked him if he knew Bulsara, but the neighbor didn’t. He said that he’s been living there for about 6 years, and saw Bulsara a lot, and that he was an oddball.

Trivia: Just after the murder, I got a call from a British friend saying, “You must be very upset.” I really didn’t know what she meant, then she explained. Apparently I worked with Jill at one point. When I was still the manager of that tour in Hollywood, we were often featured in travel television shows, and at one point, Jill had interviewed me in the back of the Grave Line hearse. So there you go. The first time Jill Dando was in a hearse, I was driving it! I have no recollection of her, but I would KILL for a copy of that tape. Well, not kill, but you know what I mean.

I know how you like to tie up loose ends so I did a Google search for you.   It seems this guy was a real whack job! Here is some of the stuff I found on the web:

Some firearms residue from the gun used to kill Miss Dando was discovered in his coat pocket and a strand of fiber that matched his trousers was found at the scene of the crime.

George, a convicted sex offender who had a history of psychological problems, had an obsession with guns and celebrities, the Old Bailey had heard.

Jill Dando’s killer was obsessed with the Princess of Wales – and experts believe that after her death he switched his deadly fixation to Jill Dando, a woman whose blonde good looks were similar to Diana’s.

Barry George was once arrested in combat gear outside the London home of the Princess, carrying a length of rope and with a knife in his belt.

Detectives on the case also found out he had tried to create a false alibi by telling staff at a charity and a local taxi firm about his movements on the day in question.

New Findadeath friend Lisa-Marie (amongst many other very nice Fndadeath friends) sent us the news that Barry Bulsara has indeed been released in August of 2008.  The Old Bailey (criminal court) has decided that he did NOT murder Miss Dando, and he will live the rest of his free life in luxury when he gets compensated for this spectacular screw up.

Findadeath member Harlequin Clown sends a link to this story.

Thanks for the info, Tony!