The Florida born Morrison was fed up with the music industry in LA, so in March of 1971 he packed up and went to live in Paris witt his on again/off again partner, Pamela Courson. Jim didn’t speak French at all.

There were vague plans for another Doors album, or a tour. It’s a shame it was never to be.  Their catalogue of music is classic, and almost defines the Sunset Strip of the 60’s.

Morrison historian Laurie writes, “I have found that Jim hated needles and never used heroin.  Many of the fights that Jim and Pam had were ignited by the fact that he found out about her heroin use and did not approve of it.  Jim went to Paris because he wanted to write, and also to become a poet but the demons of alcoholism finally caught up to him.  He was downing 2-3 bottles of whiskey a day and was lucky to have lived as long as he did.”

Jim spent most of his time trolling about the city, seeking the haunts of Baudelaire, Miller and Hemingway. He stayed in the L’Hotel at 13 rue des Beaux-Arts on the Left Bank, in which Oscar Wilde died. 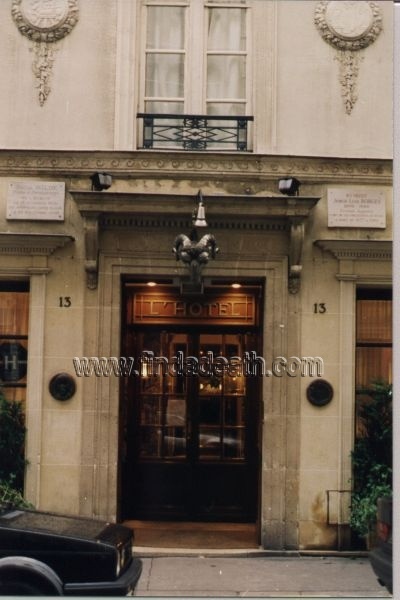 He and Pam then shared an apartment at 17 rue Beautreillis, near place de la Bastille, not far from Pere Lachaise. 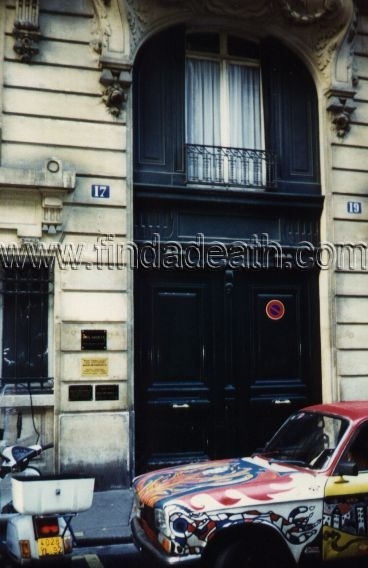 Jim had visited the cemetery only a few weeks before his death. Oscar Wilde’s grave had made a big impression.

One of Jim’s favorite hangouts was The Rock n Roll Circus (now called the “Whisky A Go Go” at 57 rue de la Seine). 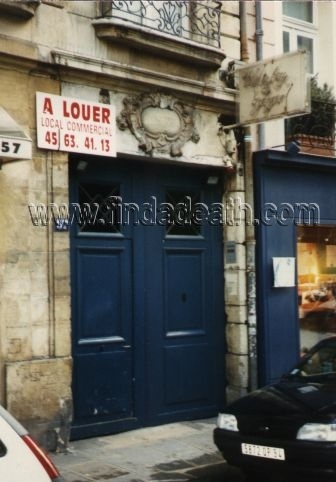 According to Pamela Courson, they went to a late-night showing at the cinema of the Robert Mitchum movie Pursued, later returning to their the apartment. 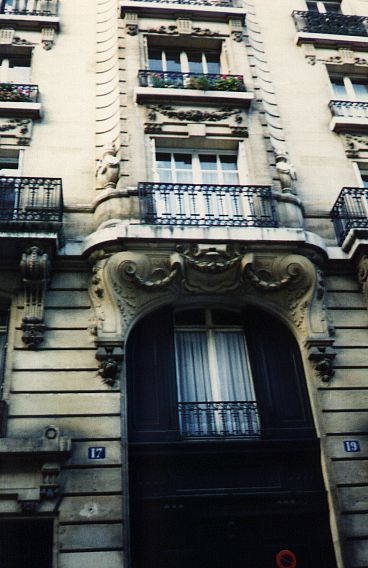 After watching some of Morrison’s home movies, they drifted off to sleep. An hour later Courson awoke to Morrison choking and gurgling.  Courson slapped Morrison awake, after which he promptly vomited blood in the bathroom. Worried, she offered to call a doctor, but Morrison declined, saying he was feeling better and wanted to take a bath. Courson went back to sleep and Morrison finished his bath.  She woke the next morning at approximately 8:00 a.m. to discover Morrison unconscious in the bathtub. A small amount of blood trickled from his nose as Courson tried to wake him.  She called her friend Alan Ronay at 8:30, and later the fire department. As the firemen pulled Morrison from the bath and laid him in the bedroom, they began to massage his heart. But it was too late.

Pam reportedly told the police that Jim complained of feeling ill, and asked her to get a bath ready. Minutes later she discovered him, unconscious in the tub. Rub a dub dub. No autopsy was done, and Pam “could not remember” the name of the doctor who signed the certificate. Couldn’t she read?

More from The Tombstone Tourist

By Monday July 5, rumors reached the US that Morrison was dead.  Manager Bill Siddons was not concerned for he had heard these rumors before.  He finally telephoned Courson and was soon on the next plane for France.  As Siddons was flying over the Atlantic, Courson purchased a thirty-year lease on a double plot at Pere Lachaise Cemetery.  She paid a total of approximately two hundred dollars for both the plot and a pine casket – the cheapest the cemetery had available.  Siddons arrived at the apartment the next day to view the coffin and death certificate (though he never saw the body. On Wednesday, a hearse with four pallbearers came to collect the casket from the apartment.  No clergy attended as they lowered his casket into the grave and only five people were present at the funeral.  Neither Morrison’s family, friends, or the band were contacted.  Amazing detail, thank you, Scott.

Six days after his death, an official announcement was made to the public. Procrastinate much?

See the French death certificate which states: “Heart problems were aggravated by the abuse of alcohol, followed by an abrupt change of temperature caused cardiac arrest,” and the much simpler English version. 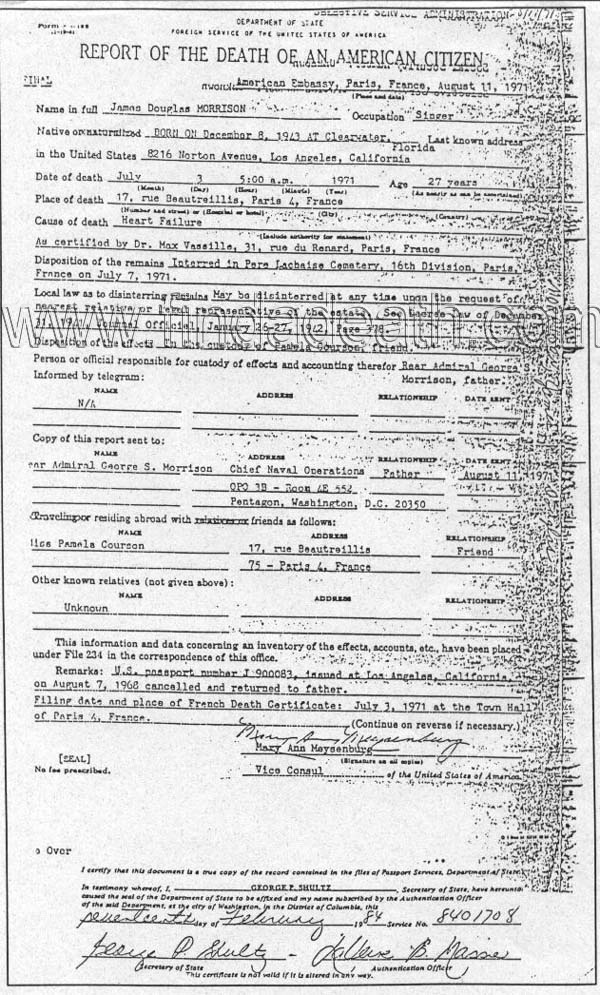 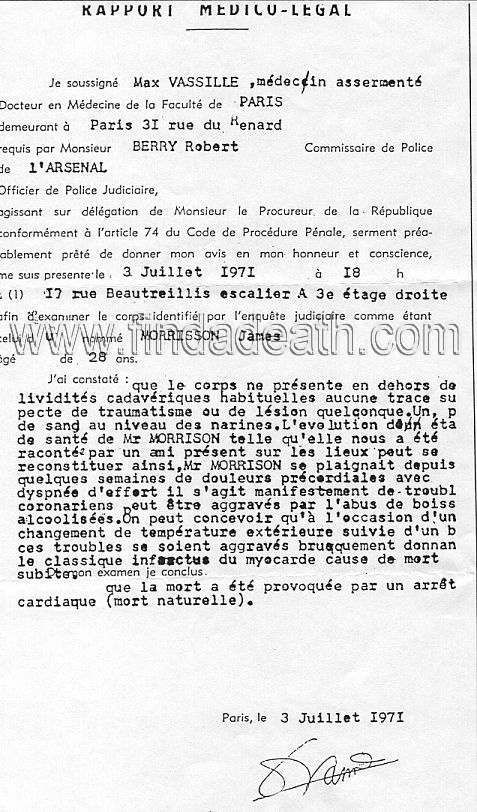 On Wednesday, the coffin was buried secretly in Pere Lachaise.  Thanks to my dead friend Jay for this picture. 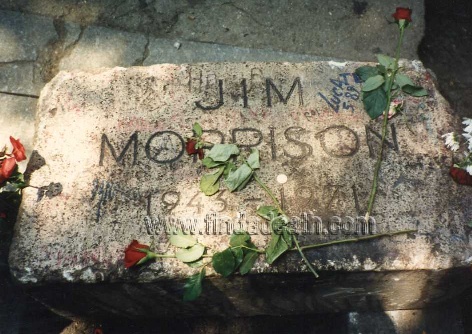 Jim had fantasized about telling the world he was dead, and starting a new life elsewhere. He planned to contact his office by an anagram-name he had devised: Mr. Mojo Risin’.

There is one unconfirmed report that Morrison was seen boarding a plane that weekend.

As you can see from his will, Pam got everything, then she went ahead and died three years later in the building below. 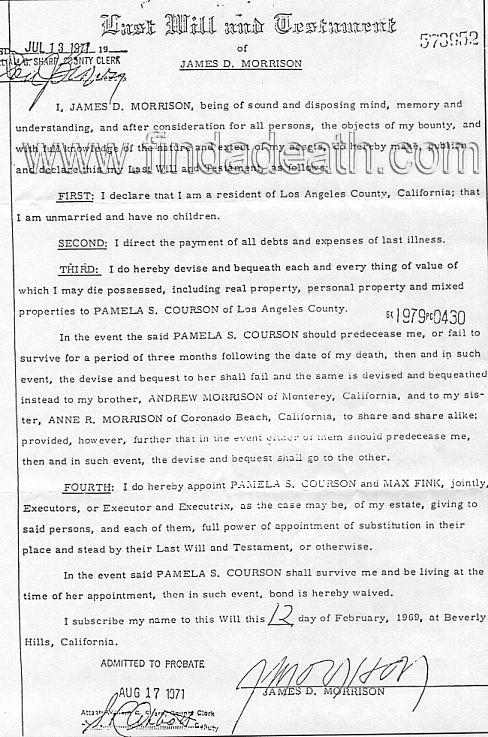 Historian Laurie clarifies: He did leave Pamela Courson everything but because of legal entanglements, the will did not go into affect until a week after she died, leaving nearly everything to her parents instead. 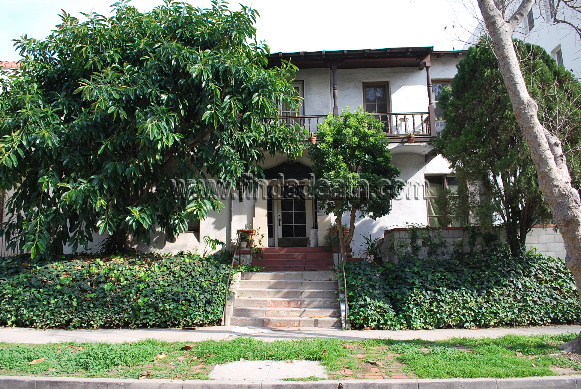 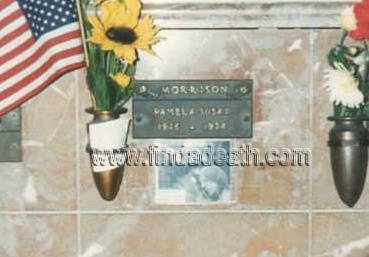 It’s common knowledge that Jim’s grave in Paris has turned into a weirdo magnet. People constantly deface it; they leave behind cigarettes, whisky, and condoms, amongst other “treasures.” Contrary to popular belief, Pere Lachaise denies that they are evicting its most famous tenant. They do however have a guard posted at the grave, 24 hours a day.

Jim’s parents upgraded the 30 year lease to forever and purchased a steam cleaner for the cemetery. That’s why you don’t see graffiti all over the place anymore.

Jim’s grave has suffered years of abuse by fans.  This is it’s current state – thank you to Paloma Pomares for this 2009 photograph. 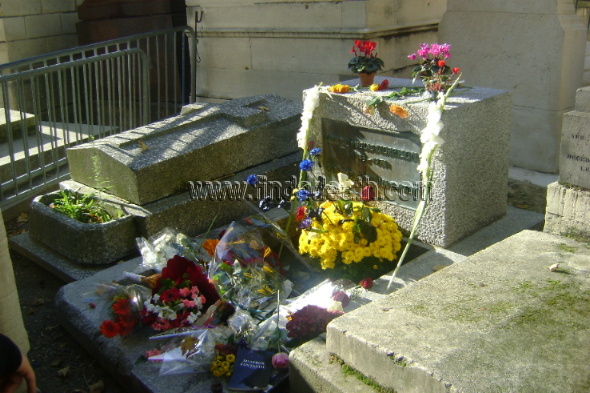 Trivia: Jim would often refer to the drug overdoses of Janis Joplin and Jimi Hendrix the year before, he would say, “You’re drinking with number three.” 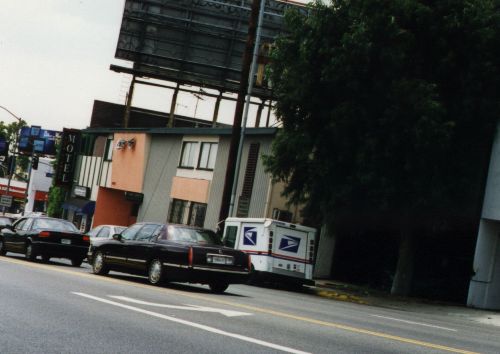 Okay, this is pretty out there.  Death Hags and great friends Brian and Christine rented the Morrison Room at the Alta Cienega. 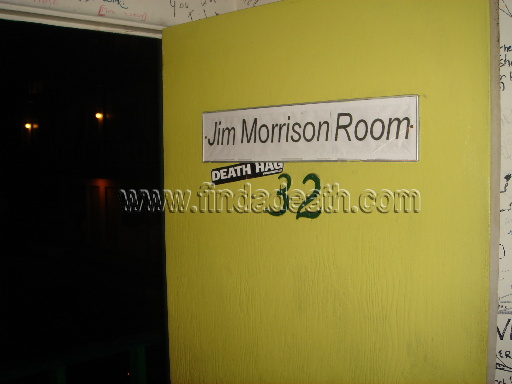 Here they are, in the window of Jim’s room. 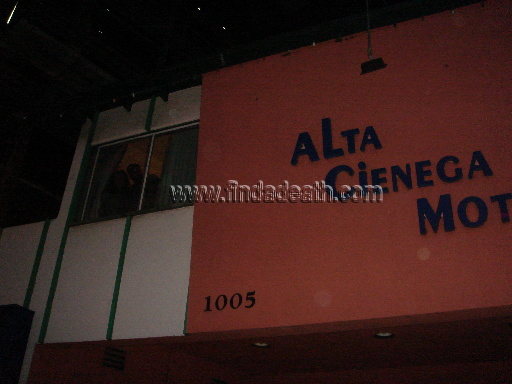 When I entered, I was absolutely blown away.  The room is entirely covered in graffiti. 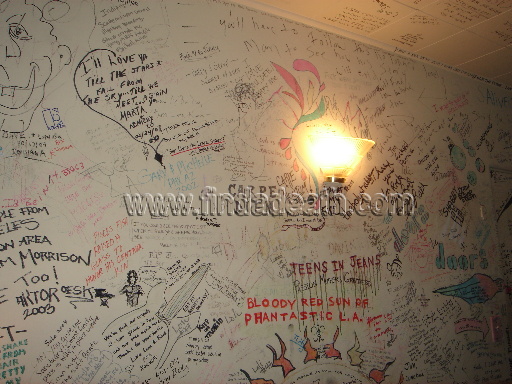 Some of it good, some not so good. 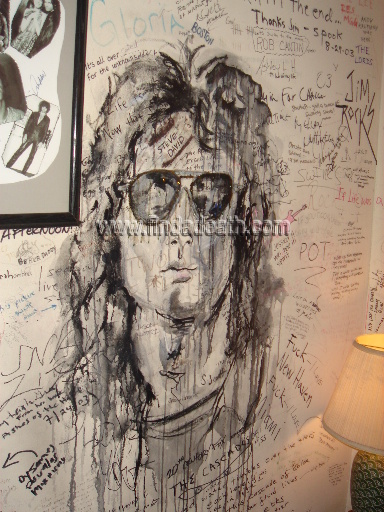 Some of it brand new. 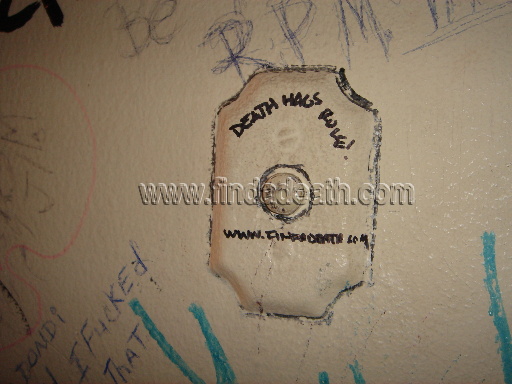 It was really just… stunning.  I thank them for giving me the opportunity.  The room is surprisingly inexpensive to rent.  Would you sleep in it?

The hotel is located near the former location for The Doors workshop, which is now a restaurant. 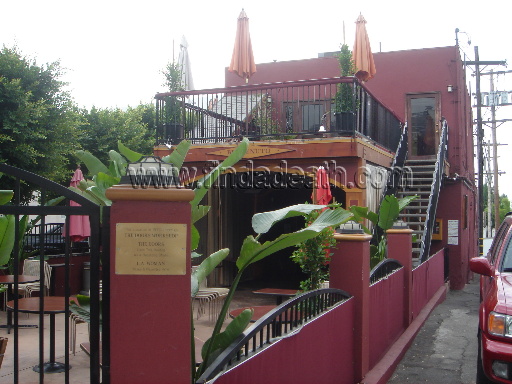 A plaque adorns the front.

Feb 2000 – just received this email:  Hey, I knew Jim Morrison from before “Light My Fire,” and was with him his last night in Los Angeles. His whole last year he had been more into his writing, film making and doing an album on the lines of “Horse Latitudes.” When he left for Paris it was to pursue those artistic directions, not so much as run away from anything. There also were no future Doors plans in the works. They had completed their contract extension with Elektra and there was only a very loose “we’ll meet in maybe a year and see what happens.”

I don’t know where you get this “death rumour” thing. On July 2, 3 and 4, 1971, I was presenting Frank Zappa & The Mothers Of Invention in Quebec City, Ottawa and Montreal when we learned of Jim’s death. It was especially ironic because when Frank got off his hired Lear jet for Sept. ’70 dates with me in Vancouver and Edmonton, he asked me if I had heard about Jimi, whose death he had learned of on the way over.

The remaining Doors played on more than just 73, for on the 3rd anniversary of Jim’s death, I was at the Whisky ‘a Go Go when Iggy Pop joined the band on stage for a killer tribute performance to Jim’s memory that should have been filmed/taped.

Jim was a lot more sober and seriously profound than the stupid myth built around him by asshole romanticism encouraged by the likes of Oliver Stone and others.

A lot of people really slammed Oliver Stone’s The Doors movie.  In my experience, you will always displease somebody.  Personally, I loved it.  I loved the 60’s feel of LA, and the way they made the Sunset Strip look like no time had passed.  Yeah, give me the 60’s. Oh, without that Vietnam thing please.

A couple of years ago, The Doors released a book called The Doors.  They held a book signing at Book Soup – and a concert at the Whisky. 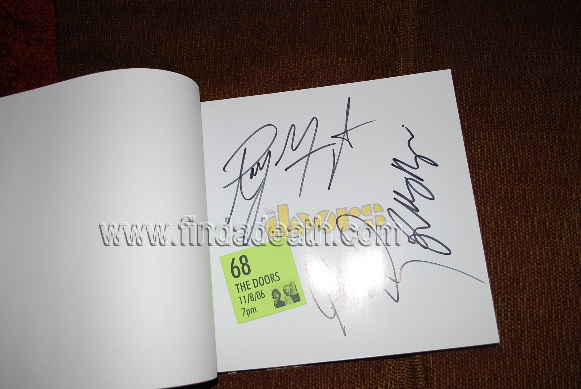 How about a look at the now empty – cool signage gone Morrison Hotel? 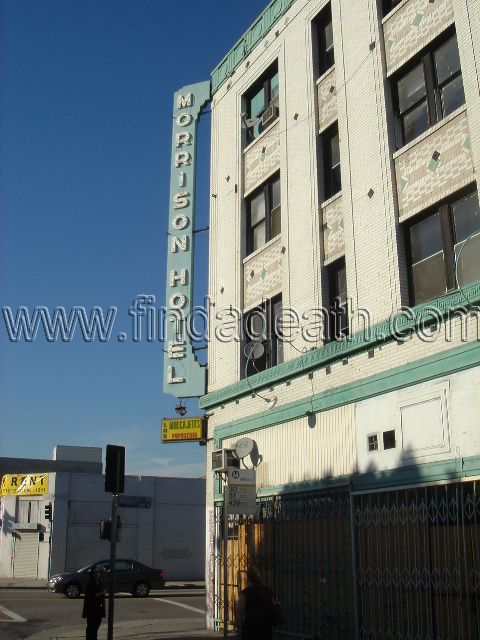 It’s covered with these great green and white enamel-faced bricks.  Here’s mine. 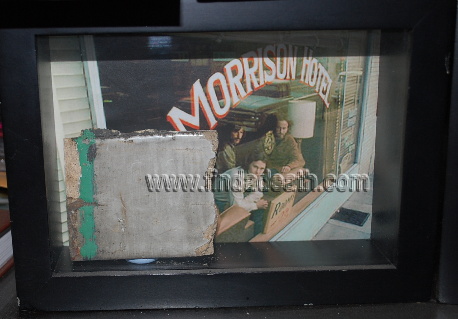 Thank you to my friend Jayne Osborne for turning me on to this location. 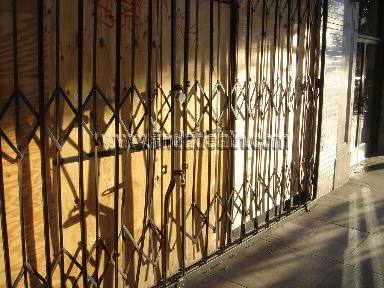 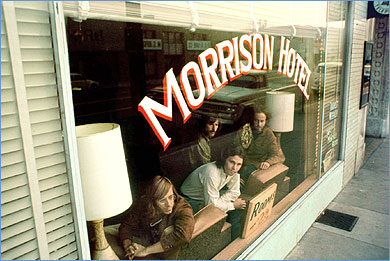