The kind of people who always go on about whether a thing is in good taste invariably have very bad taste.

With big recognition going to John Lahr, author of the biography, Prick Up Your Ears.

I met Lahr, briefly, last year. I work presently as a bartender at the Royal Court Theatre, in Sloane Square, London. In the restaurant, we have a bookshop, and recently they sponsored John Lahr to come and do a chat about a new book he has out. I spoke to him about Orton, and his notorious escapades in the London public toilets, and the fact they were torn down. I grabbed a glass tile from the site, and asked John Lahr to autograph it for me, with an appropriate sentiment. 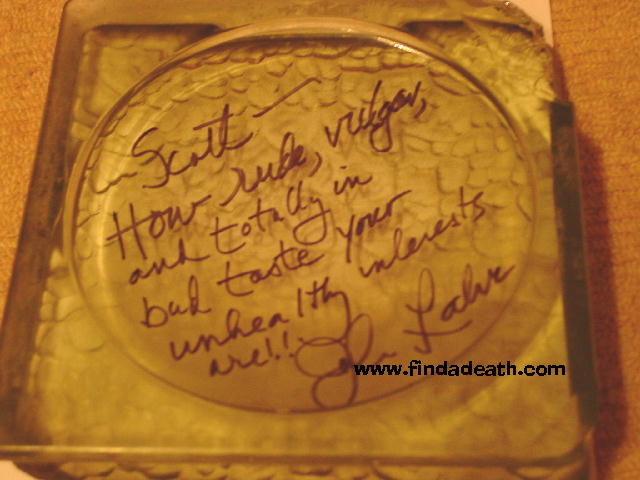 With a grin on his face, he signed it, proving that he is indeed a good guy. And he looks just like his dad, Bert, the cowardly lion in The Wizard of Oz. 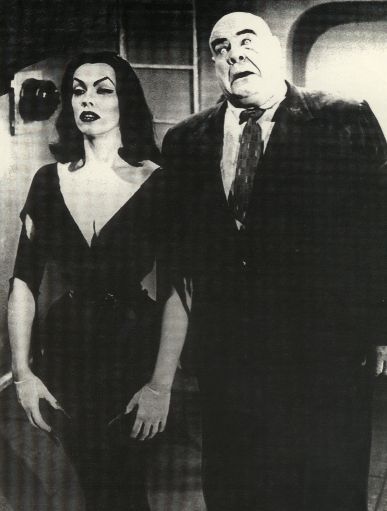 Kenneth was not emotionally equipped to deal with Joe.

Joe wrote such plays as Loot, Entertaining Mr. Sloane, and What the Butler Saw.  He was hot hot hot.

Joe and Kenneth lived together in Noel Road, in Islington, north London. 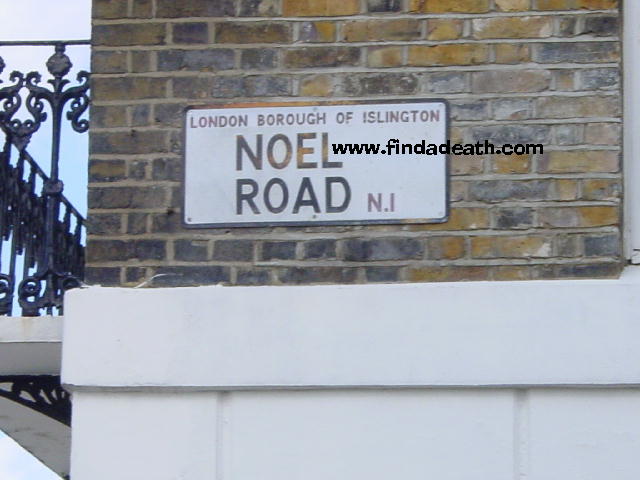 I live there too. Not that road, but near enough. Their house was located at number 25, and here is the front door. 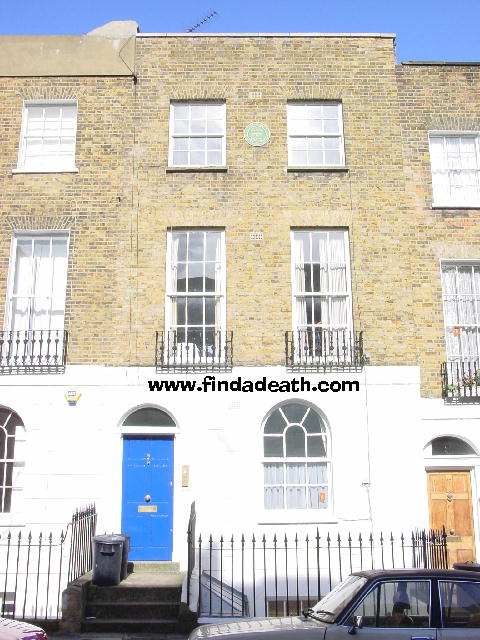 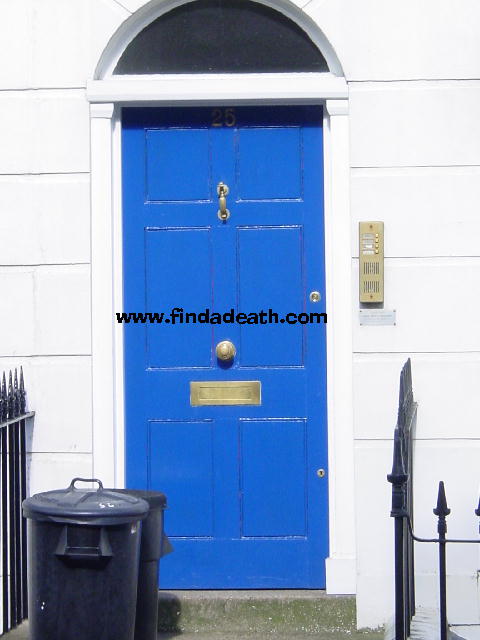 They shared the top floor flat. 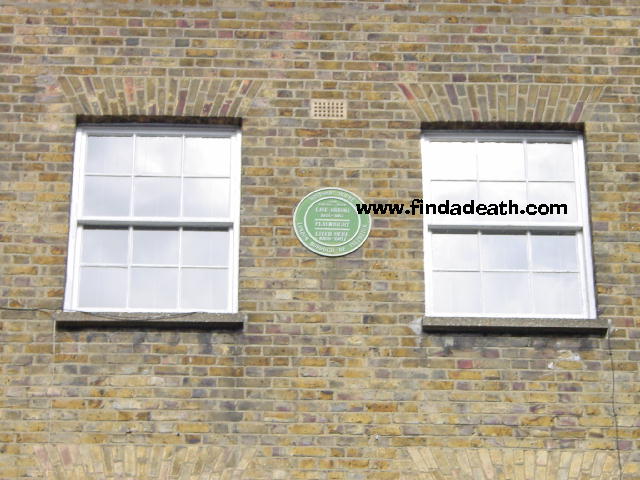 This plaque now adorns the wall in remembrance of Joe. 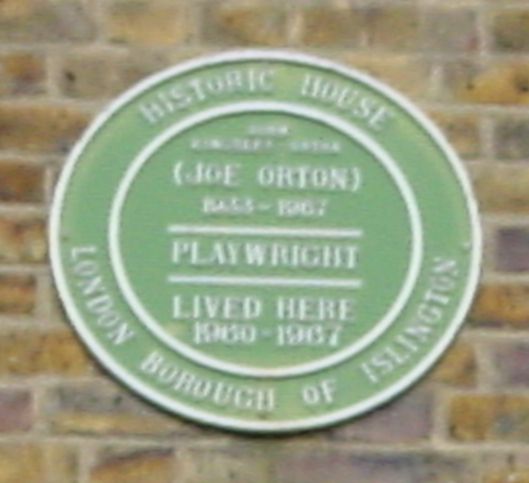 But I’m getting ahead of myself.

Updated September 2003 – Thanks to Findadeath.com friend Darren Boakes who is a big admirer of Joe. He sends us this amazing information:  “I met the guy who owns the flat now, and his wife.  Their maid lives at 25 Noel Road now, and they live in the next street.  It felt so eerie going up the stairs to the flat, and then going in. 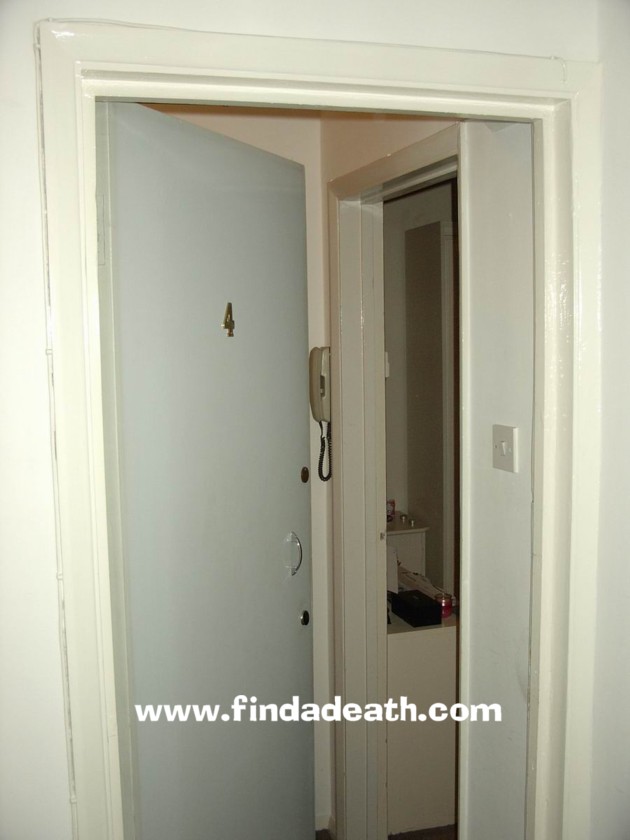 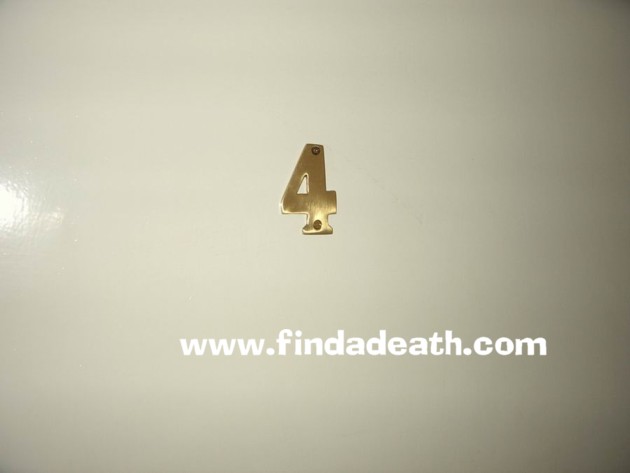 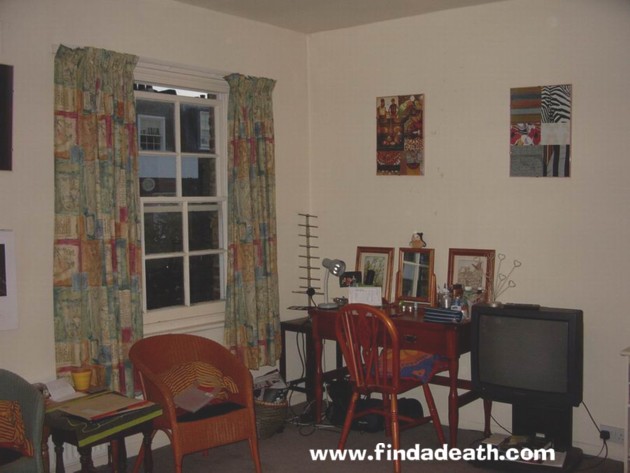 They were really helpful and told me bits of info that they knew.  For instance, when they bought the place that Kenneth’s signature is on the deeds for the property.  Also nearly all of the place has been refurbished but they lifted the carpet tiles in kitchen to show me the original floor. 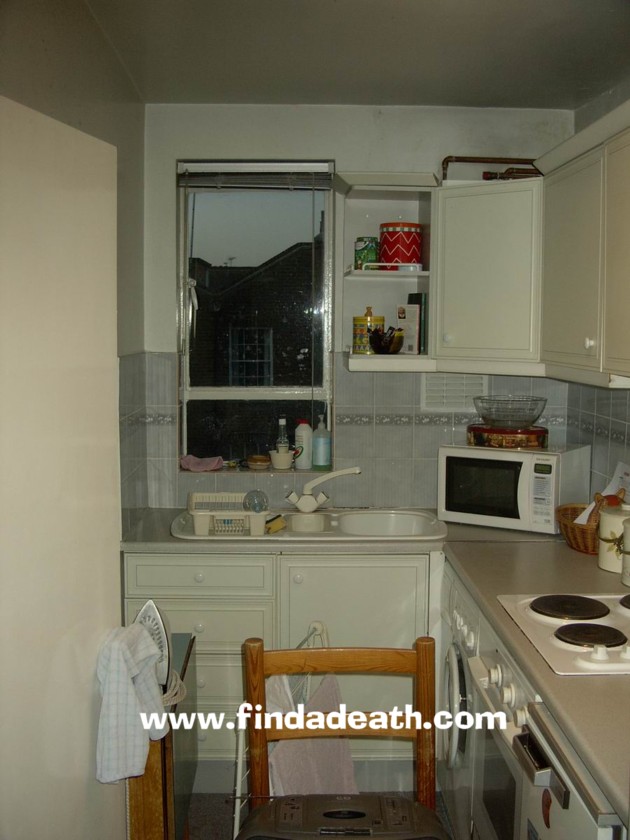 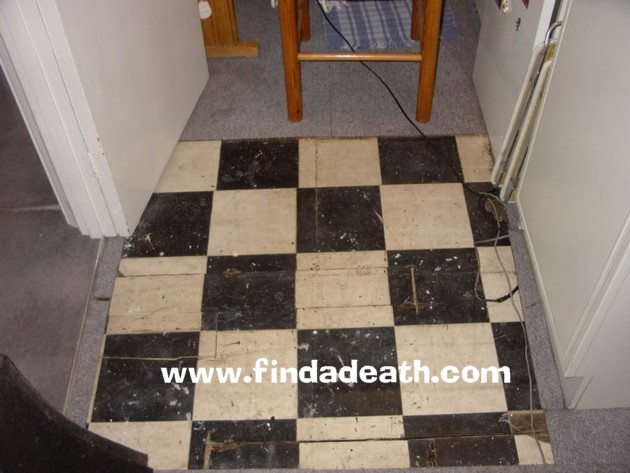 Also went up to the roof terrace where Joe used to
sunbake. 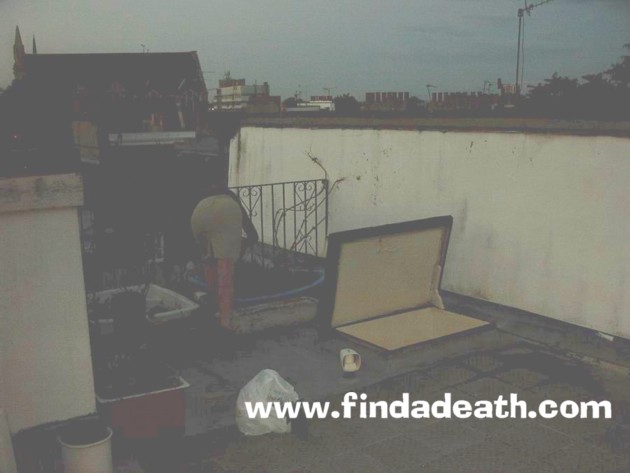 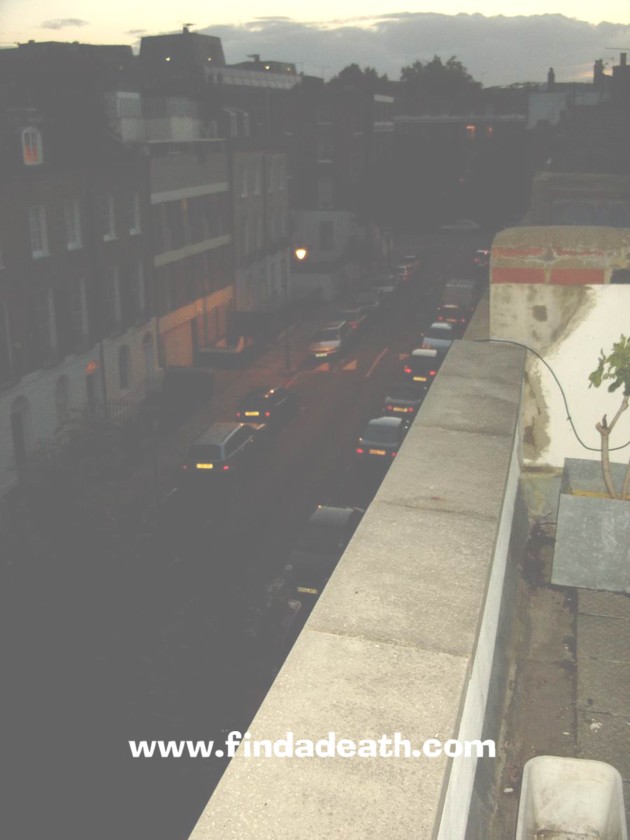 Here is the toilet. 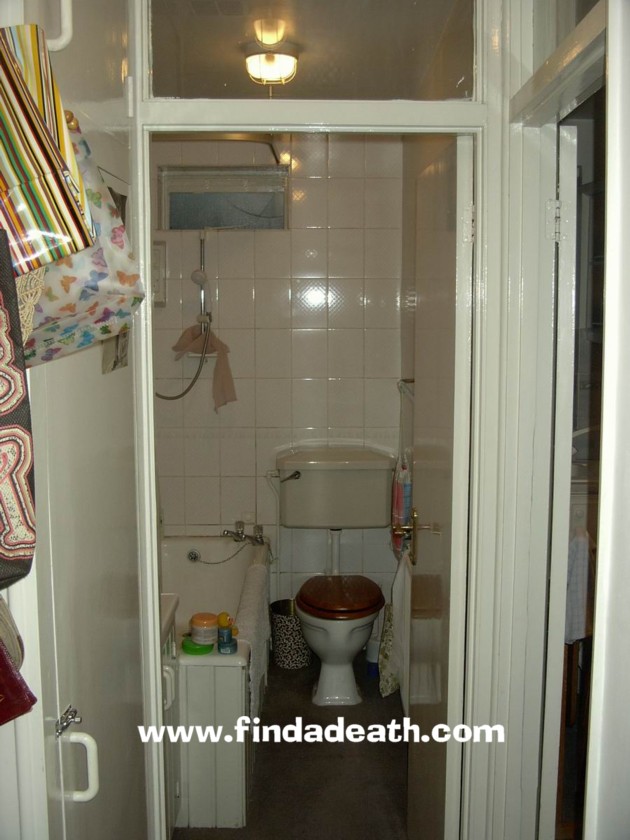 It was so exciting to go, to know that Joe lived and died there.  It was special for me.  Hard to explain but I will always cherish.

On the night of August 8, 1967, Kenneth flipped. There must be something with the planets that date. Two years later on that same night, Helter Skelter happened, a few thousand miles away. But, the similarity doesn’t end there. Sharon Tate had another connection to Islington, literally steps from Orton’s and Halliwell’s front door.

Back to the story: This is taken directly from John Lahr’s book. I hope he doesn’t mind.

“The note was found on top of the red grained leather binder which held Orton’s diary. The words, fastidiously written, had none of the horror that the scene did.

“If you read his diary, all will be explained. KH PS: Especially the latter part.”

Halliwell lay nude on his back in the centre of the room, three feet from Orton’s writing desk. The back of his hands, the top of his chest, and his bald head were splattered with blood. Except for his arms, rigor mortis had set in. Halliwell’s gory pyjama top was draped over the desk chair. On the linoleum floor near him was a glass and a can of grapefruit juice which had speeded the twenty-two Nembutals into his blood, killing him within thirty seconds. Halliwell had died sooner than Orton, whose sheets were still warm when the police discovered him in bed, his head cratered like a burnt candle.”

Halliwell used a hammer on Joe, and bashed his head in 9 times with it.

Joe was going to work on a screenplay for a new film starring The Beatles. He’d already met the fab four, and got on well with them. On the morning of the 9th, a chauffeur was sent to pick up Joe to take him to the studio for a meeting. At 11:40 a.m., the driver walked up the three flights of stairs, and knocked on the door of the flat. After no answer, he left, and made a call. He was told to try again, and when there was still no answer, he peeked in the letterbox. Whoops. 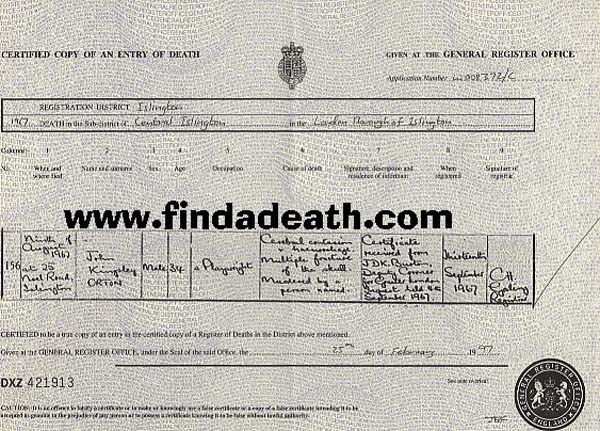 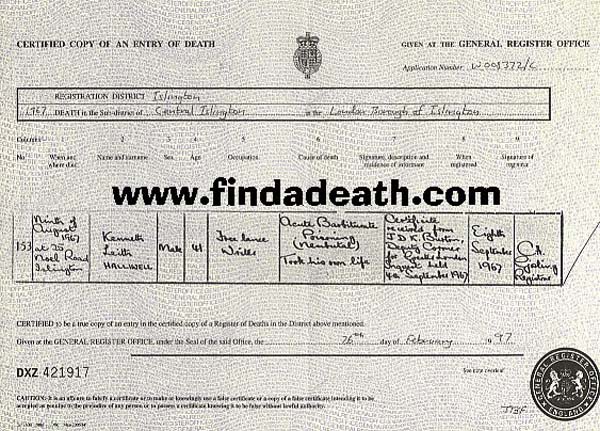 They were indeed in a relationship, but Joe was not the monogamous type. He shagged everything that moved. His most notorious stomping ground was the public lavatory located at the Islington Green. He would sit in a café, and watch the guys going in. 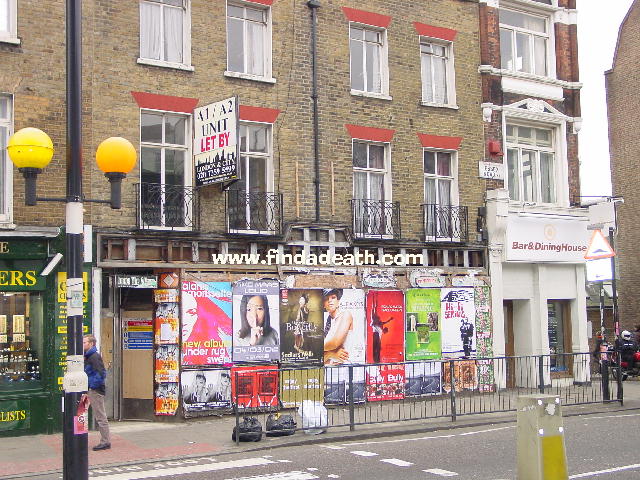 If there were someone that struck his fancy going in, off he’d go to join the fun. The toilets are now demolished. 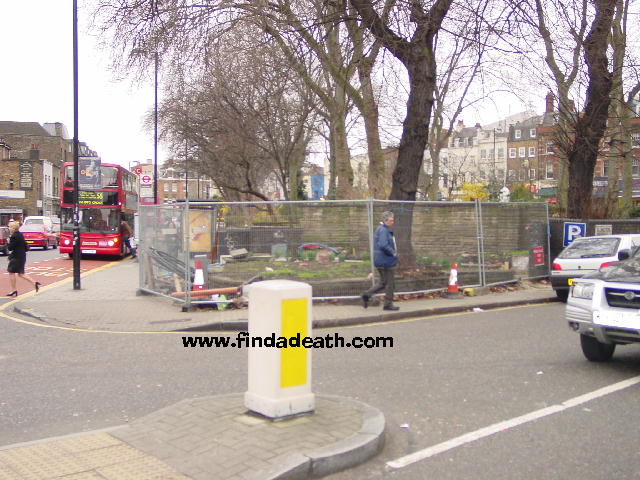 Two dozen people showed up, and they played The Beatles’ A Day In The Life. Halliwell’s cremation took place at Enfield in Middlesex, on the 17th. Two people showed up.  Their ashes were combined, and scattered in the Garden of Remembrance, at Golders Green.

Trivia: Joe and Kenneth were sentenced to six months in prison, for stealing, defacing and then replacing library books. Most of them were taken from this library. 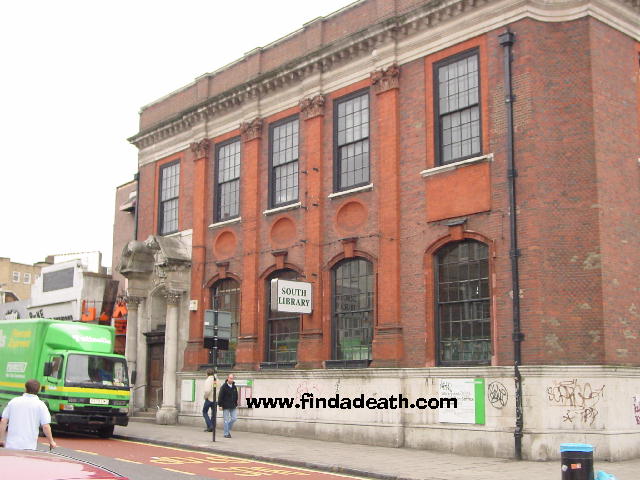 The altered versions were usually very funny, and from what I understand now, the books are on display in a local museum. The fact that the council is now using them as a tourist attraction is sort of interesting.

Trivia: British actor Kenneth Williams cracks me up. His diaries: vile and hysterical.  He knew Joe and Ken well, and his observations will leave your jaw on the floor.