We didn’t sell a lot of records, but somehow we left an impression.

As my pal Dave said, “Poor old Ramones.  Only the drummers left.”

The Ramones were one of the greatest bands in history.

On September 12, 2004, there was a 30th anniversary show for the Ramones at the Avalon in Hollywood. 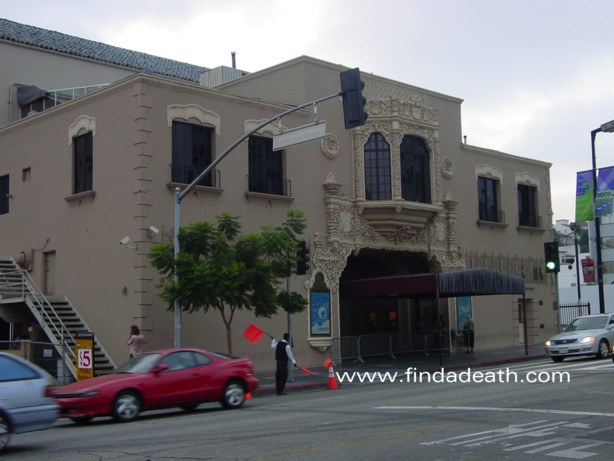 Veteran punk guitarist Johnny Ramone of the legendary Ramones is fighting a losing battle with prostrate cancer in a Los Angeles hospital. Johnny, real name John Cummings, was diagnosed with the cancer four years ago, and the disease has now infected his entire body.

“Johnny’s been a champ in confronting this, but at this point I think the chances are slim,” band mate drummer Marky Ramone said. “John never smoked cigarettes, he wasn’t a heavy drinker and he was always into his health. It just proves when cancer seeks a body to penetrate, it doesn’t matter how healthy you are or how unhealthy you are. It just seeps in and there’s nothing you can do.”

Following reports that the legendary punk guitarist lay dying of cancer in a Los Angeles-area hospital, the Ramones rocker and his wife, Linda, released a statement saying he’ll be just fine, thank you.

The 55-year-old has been hospitalized with an infection related to prostate cancer, his rep said Thursday. “He is receiving the medication he needs and will be leaving the hospital next week to continue his recovery,” per spokesman Paul Bloch.

Ramone (aka John Cummings) is being treated at Cedars-Sinai Medical Center. He was reportedly diagnosed with prostate cancer four years ago and has undergone extensive chemotherapy treatment to battle the disease–with varied results according to some.

“He went through many chemotherapy treatments,” Marky told the mag. “Some of it worked better than others. At this point [the cancer] has started to go into other areas of the body.”

“Johnny’s been a champ in confronting this, but at this point I think the chances are slim,” he concluded.

Los Angeles, CA (September 15, 2004) — Johnny Ramone, co-founder and lead guitarist of seminal 70s punk rock band The Ramones, died in his sleep this afternoon at 3:03 pm in his home in Los Angeles. Ramone had been fighting an ongoing five year battle with prostate cancer. At the time of his death, Ramone was surrounded by friends and family that included his wife Linda Cummings, Eddie and Jill McCormack, Rob and Sherrie Zombie, John Frusciante and Robert Carmine. Additional friends who gathered at the home included Lisa Marie Presley and Michael Lockwood, Pete Yorn, Vincent Gallo, Steve Jones, Talia Shire, Gia Coppola and Jackie Getty. Johnny Ramone, whose real name was Johnny Cummings, co-founded The Ramones in 1974 along with fellow bandmates Joey Ramone, DeeDee Ramone and Tommy Ramone, the only surviving member of the original band. The band, which gained critical acclaim and a huge following in New York’s underground music scene at the time performing at clubs such as CBGBs, is widely credited for bringing the “punk rock” genre to the forefront. The Ramones were inducted into the Rock and Roll Hall of Fame in 2002. Johnny Ramone is survived by his wife Linda Cummings and his mother Estelle Cummings. His body will be cremated during a private ceremony.

The Guitar Center on Sunset placed a nice flower arrangement near the Ramones handprints. 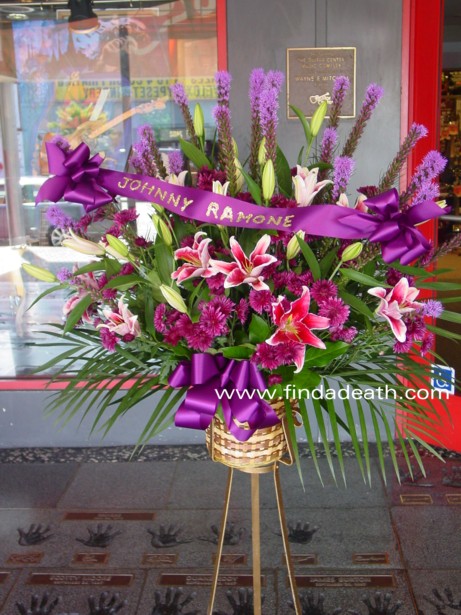 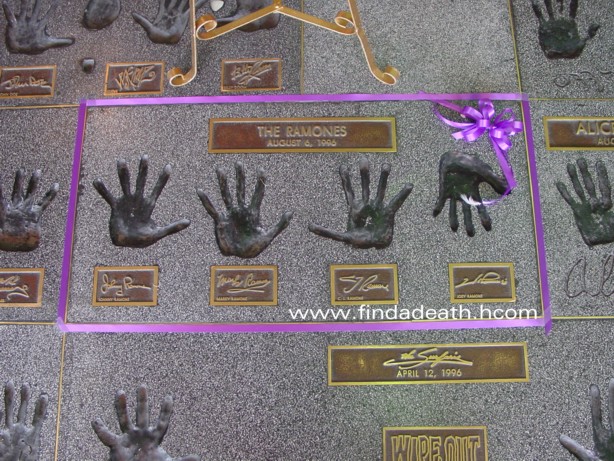 By all accounts, and I have very good sources, Johnny Ramone is supposed to be a real dick. He wasn’t speaking to Joey for ages, because allegedly Johnny stole Joey’s girlfriend. I imagine being together in a band for so many years had to make people sick of each other. Especially with only moderate financial success.

Scott, As good as your sources are they cannot be stronger than me. I was a part-time roadie (during college) and a friend of Dee Dee, Johnny and Arturo. To give you an idea of our relationship, when I was in my first year of medical school, I attended a Ramones show in CT. After the show, Johnny told me he was having abdominal pain. The only “doctor” he wanted to see was me. I explained to him that I was no where near my doctorate but I’d be glad to help where I could. I was able to help him diagnose his problem (minor) and explained that he needed to see a real doctor. Johnny explained that he didn’t like doctors too much after his ’83 brain surgery.

Johnny was most decidedly not a “real dick” – he was in fact the coolest of the Ramones. He liked to discuss the Yankees (and baseball in general), sports, horror movies (Dr. Butcher M.D. was one of his favorites), investments and Elvis. He was always very friendly and very cool to be around. What he didn’t suffer was spiked-haired fools who had nothing to say
or jerks who only wanted to talk about the “Old Days of Punk.” Dee Dee was also very friendly. Joey was always aloof and would not give you the time of day. He was too cool for anyone but his inner click. It’s true that him and Johnny didn’t get along (or even talk) but it was both of their faults.

I hope this sheds some light on Johnny.  -Nick

I did meet Joey and Johnny once, in Detroit. It was really something to say hi, and get their autographs. Then some jerk that I could kill, stole them. I had signatures from Patti Smith and Fred Sonic Smith (from when I saved them from getting their asses totally kicked at a concert that went VERY wrong), Annie Lennox and Dave Stewart…and my backstage passes from Pearl Harbor and the Explosions, Madness, the Undertones… all gone.

Thanks to Findadeath.com friend Seddy, for sending this:  January 14, 2005 Late punk guitarist Johnny Ramone is being immortalized with a bronze statue at the Hollywood Forever Cemetery.

Ramone, co-founder and guitarist of The Ramones, was 55 when he died of prostate cancer on Sept. 15, 2004, at his Los Angeles home. The statue is near the grave of bandmate Dee Dee Ramone, who died of a drug overdose in 2002.

The Johnny Ramone monument, created by artist Wayne Toth, shows Ramone playing his Mosrite guitar and it features the words, “If a man can judge success by how many great friends he has, then I have been very successful – Johnny Ramone.”